A market-friendly but U.S. Dollar-negative 'blue wave' outcome to the hotly contested U.S. election could yet transpire, given news that the race for the Senate will only be decided in January.

The Democrats need to take the White House and the Senate in order to grasp the kind of control required to unleash a truly sizeable fiscal aid package, the kind that analysts have been saying for months would hamper the Dollar in 2021.

Georgia Republican Senator Perdue failed to clear the 50% threshold by the narrowest of narrow margins (49.99%) which will now result in a run-off in January, along with the other Georgia senate race.

"That means control of the Senate will not be known for certain until January’s special elections in Georgia and the final result will either be 51-49 to Rs or 50-50 with VP Harris (assuming Biden win) casting swing vote," says Elsa Lignos, Global Head of FX Strategy at RBC Capital Markets. 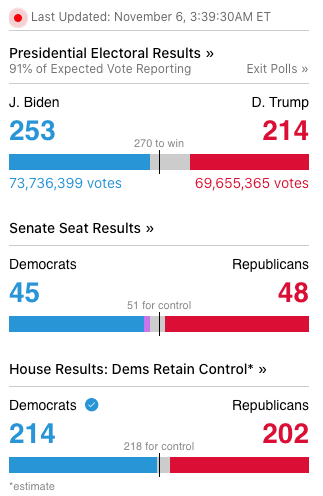 Ahead of the vote, a popular narrative amongst investors was the Dollar faced a period of long-term decline should the polls prove correct and the Democrats sweep the White House and Congress. This was an assumption largely build on a view that the Democrats would have full control over tax and spending powers, thereby allowing them to deliver a generous package of fiscal support.

This would in turn boost stocks and weight on the Dollar. "Any change that raises the odds of a 'blue wave' scenario - where former Vice President Biden wins the presidency and Democrats also take the Senate - should accelerate U.S. Dollar weakness," said analyst Zach Pandl at Goldman Sachs in New York ahead of the election.

The 'blue wave' scenario would however also require the Democrats to take the White House and at the time of publication Biden stands on 253 electoral votes to Trump's 214.

According to political pundits, a further win in any of the states that are still to declare (except Alaska) will help push Biden over the top. Of those, Nevada and Pennsylvania are seen as possibilities, and he may also make it to 270 by winning in the previously Republican state of Georgia.

But while Georgia is close to declaring some media outlets like NBC are saying it could be weeks before they make a final call, given how tight the race is here. A recount on a paper-thin win for either candidates could be in prospect.

A clear-cut win would likely assuage market fears and offer some confidence on the outlook, thereby further aiding stocks and hampering the Dollar.

However, short-term volatility and Dollar strength might increase should Trump's attempts to overturn votes via the legal route succeed.

A protracted court case that delays the result is possible.

However, a theme running in the major media outlets on Friday is the view that no major senior Republican candidates are backing Trump's claims of fraud, even if it is firing up his base.

"A long drawn-out legal battle would also be very expensive, and without party support, Trump is unlikely to muster it. Unrest so far is limited, though markets are sensitive to that changing," says Lignos.