An acceleration of U.S. Dollar weakness has been the main theme in global foreign exchange markets over the course of the past week, but the decline is now looking overdone and it is too soon to suggest a more sustained long-term decline in the Greenback is about to commence say some analysts.

The U.S. Dollar's retreat from its March highs has accelerated over the course of the past week, on a combination of reduced demand for safe-haven assets as a global post-covid recovery continues, a view that the U.S. economic recovery is underperforming global peers and that the November presidential election introduces a degree of uncertainty into the outlook.

USD weakness has been particularly evident in the Euro-to-Dollar exchange rate which has recovered from a March low of 1.0637 to 1.1736 at the time of writing. The pair is now up 4.50% in 2020 with the lion's share of the gains coming in just the past ten days.

The decline in the USD has even allowed the Pound - which remains addled by Brexit anxieties - to recover: the Pound-to-Dollar exchange rate has risen from March lows at 1.1414 to 1.2863 at the time of writing, but it must be stressed that the exchange rate is still lower now than where it started the year which was at 1.3085.

"The greenback tumbled to March lows against the Yen and Sterling, slipped to near two-year lows against the Euro, and hit its weakest in five years versus the Swiss Franc," says Joe Manimbo, Senior Market Analyst at Western Union. "No sign of the coronavirus abating in the U.S. means no sign of a bottom for the greenback. America’s struggle to slow the resurgent virus has dampened confidence in officials engineering a quick recovery."

"The market has taken a view on the dollar, and it does not look pretty for the greenback. It seems that every shift in newsflow is being interpreted as dollar weakening right now," says Richard Perry at Hantec Markets. "However, it is the perception of the US economic recovery lagging in the second half of the year which seems to be the major factor in driving the dollar lower."

U.S. economic worries intensified last week after weekly jobless claims unexpectedly rose, while Congress not agreeing to a new round of fiscal support to replace the measures due to expire this week is only adding to the pressure. Contrast this to the EU (and indeed UK) where PMI data for July released last week showed a strong recovery was underway, while EU leaders wrapped up a €750BN post-covid rescue deal with relatively little fuss.

U.S. monetary policy is also cited as a driver of USD weakness.

"The rationale behind the bearish USD sentiment stems from the huge amount of USD liquidity that has been pumped into the market in recent months combined with a broadly held expectations that the Fed will step up its dovish tone at this week’s policy meeting," says Jane Foley, Senior FX Strategist at Rabobank.

Yet another potential reason for Dollar weakness according to Foley is speculation that US/China relations will improve if Biden wins the Presidential election in November and speculation that a Democratic Presidential will increase regulation and taxation resulting in a less market friendly environment are also part of the worsened outlook for the USD.

In this environment the Dollar index - a measure of broader Dollar performance - has fallen to its lowest level since June 2018, signalling to the markets and financial commentariat that a more substantial decline could be beginning. 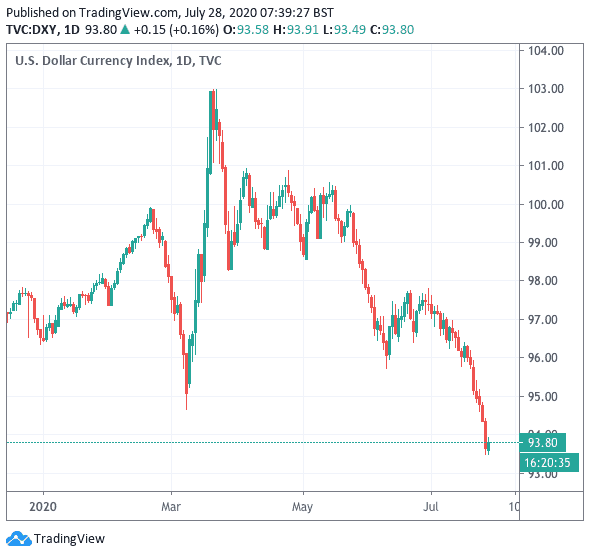 However, it must be stressed that the Dollar index is itself heavily weighted to EUR/USD which is the largest constituent of the basket, followed by USD/JPY. Therefore, it's possible to argue that the declines are being overexaggerated and that against most currencies the Dollar is more or less closer to levels where it started the year. This is true for a whole host of Dollar exchange rates, including GBP/USD, AUD/USD and USD/CAD which hardly suggests the bottom has fallen out of the Dollar market.

And, the recent sell-off is looking overdone on both fundamental and technical viewpoints argue some analysts which could open the door to a recovery over coming days and weeks.

"It is possible that the current rush to sell USDs is becoming over-extended," says Foley. "We maintain that it remains a practical safe haven for many types of investors. Given current concerns about the threats to the global economy, we see risk that recent selling pressures may be overdone."

"The USD does not have text book safe haven characteristics. It runs a large budget deficit and a current account imbalance. However, it is the dominant currency on the global payments system. There have been small efforts to break this down, but is could take decades to undermine the USD’s dominance. This almost certainly means that the USD will be favoured on any further breakdown in market confidence," adds Foley.

The Dollar's fate therefore could ultimately rest with the outlook for global markets and the likelihood of a sustained recovery in 'risk on' assets until year end. With second spikes of covid-19 infections flaring up in Europe and with the global and U.S. case load still rising, it is too soon to suggest the all-clear from the pandemic is upon us.

Could it be that the recent decline in the U.S. Dollar is merely an adjustment from the significant strength seen around March when the coronacrisis meltdown was at its peak and the world scrambled for liquidity?

"We see risk of a pullback towards the EUR/USD 1.16 area in the weeks ahead," says Foley. "On the anticipation that risk appetite will be reeled in in the coming months and that the USD will remain a primary safe haven, we see a dip lower towards the 1.12 area on a 6 month view.

From a technical perspective, the Relative Strength Index (RSI) - a measure of momentum - is now at 70.5 on the GBP/USD exchange rate which makes it overbought and due a pullback or a bout of consolidation. (An RSI at 70 = overbought, RSI at 30 = oversold).

The RSI on the EUR/USD is meanwhile at 79.80 which makes it significantly overbought and due a correction.

"The latest breaks above key-resistance between 1.1458/95 and 1.1596 (50 %) are very bullish long-term, but doesn’t eliminate looming setback risks in the short-run," says Thomas Anthonj, a technical strategist at JP Morgan who is this week warning that a potential retreat by EUR/USD could be shaping up.

So while the Dollar has fallen of late, excitement over the commencement of a long-awaited cyclical decline of the Dollar appear to be misplaced and it might still be too soon to ramp up bets for further substantial declines as a result.