Pound Sterling underperformed on Friday, enabling a weakening Dollar to pull ahead of it but the British currency's short-comings will remain on display for all to see in the months ahead, which is why Nomura has downgraded its forecasts and looks for even further weakness up ahead.

Dollar selling resumed Friday after Asian stocks stabilised and as a cautious calm prevailed in Europe ahead of the weekend, although the Pound-to-Dollar rate was again on the back foot despite weakness in the U.S. currency.

Sterling was one of only two majors to cede ground to the Dollar and may have been held back by Bank of England Governor Andrew Bailey, who told a Citizens' Panel Open Forum that housing and car sales are recovering strongly but that hospitality and entertainment industries remain lifeless.

Estate agents and car dealers were among the first granted permission to reopen in June while hospitality and entertainment outlets were not given the nod until July 04, so a recovery in the latter has had less time to build.

"The broad based USD weakens against most G10 currencies except for CAD and GBP as the risk environment remains supported," says Sarah Ying, a strategist at CIBC Capital Markets. "Risk markets catch a slight bid as we round up the week despite a rally in Treasuries. Moves are within normal daily ranges as we continue to go through the motions during lighter summer days." 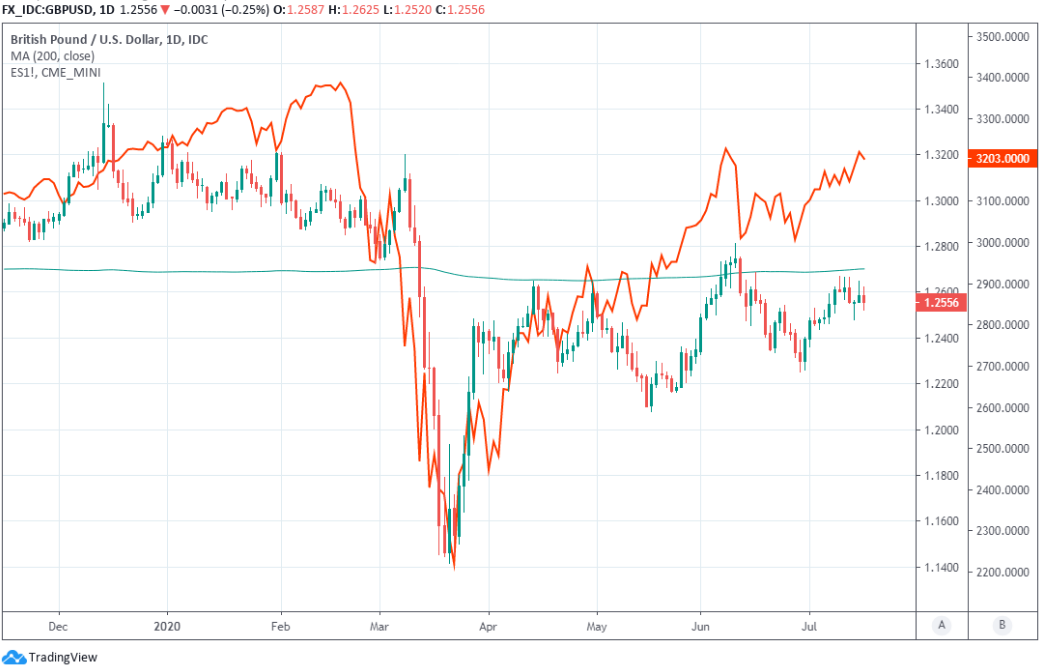 The Pound's fortune has improved in recent weeks as stock markets slipped into a consolidative range, taking the risk-sensitive currencies that follow them along for the ride while enabling the Dollar Index find a bottom that's so-far survived July's weakness. But the outlook for the U.S. has darkened as a second wave of coronavirus sweeps the country, and GBP/USD remained nearly -4% below its March levels on Thursday and was still down -5.4% for 2020.

Friday's price action follows outperformance on Thursday that may have left the Pound susceptible to weakness ahead of the weekend, but the fact that Sterling is still frequently found at the bottom of the major currency class is indicative of the risks faced by the British unit, and its reduced appeal to investors.

"GBP is an international reserve currency that trades more like an emerging market. Thanks to the UK large current account deficit GBP trades in line with global risk sentiment and in line with moves in CNH. Global risk sentiment and CNH remain supported for now, explaining GBP/USD’s recent move higher," says Jordan Rochester, a strategist at Nomura. 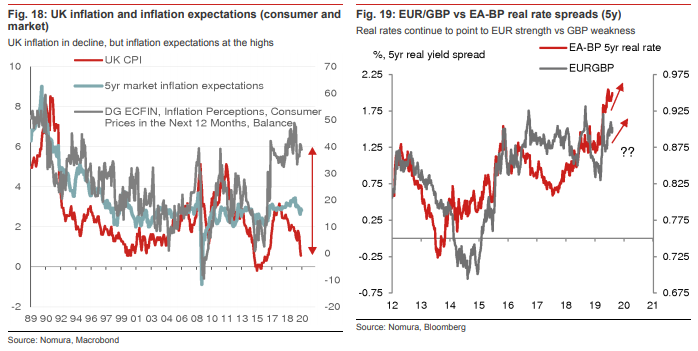 Rochester downgraded forecasts for Sterling this week and as a result Nomura no longer expects the Pound-to-Dollar rate to be able to hold onto any further ground it might win back in the days or weeks ahead. He looks for a fall back to 1.23 by the end of the September and a year-end finish at 1.24, with both being downgrades from earlier projections of 1.25 and 1.27 respectively.

Unlike many other major economies the UK has demonstrated in recent years that it's still capable of generating above-target inflation pressures that eat away at the yields on British government bonds, which market expectations for inflation to remain elevated no matter the repeated disinflationary shocks that have either befallen or threatened the economy of late. These elevated expectations make for declining 'real' bond yields, which are a net negative for perceptions of a currency's fundamental value.

"The UK’s real yield remains a drag, mobility in the UK has yet to recover in a similar way to that of mainland Europe. The UK’s fiscal and monetary response is not matching that of its European peers, with the furlough scheme ending in October and the BoE’s QE pace now half what it was. The UK has second-wave risks that may appear by end-Q3/Q4, with an underlying higher case count and less adoption of mask wearing than its DM peers," Rochester says. 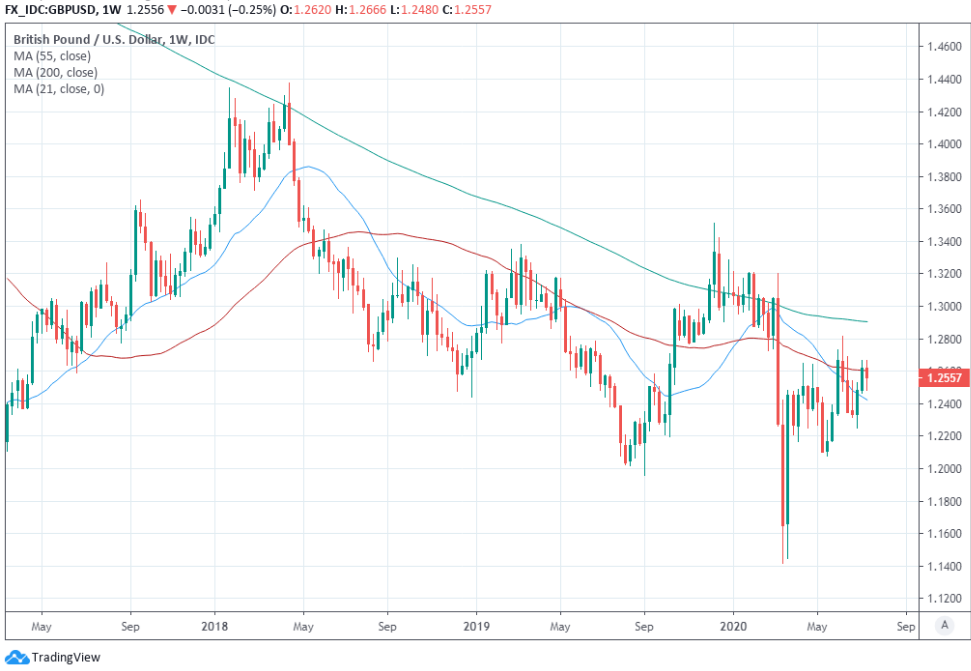 Above: Pound-to-Dollar rate shown at weekly intervals with 21, 55 (red) and 200-week moving-averages (green).

If not for upbeat sentiment among investors compelling a move away from the safe-haven Dollar while lifting stock markets and other maor currencies then there's no telling where Sterling would be. More so given that market expectations for Dollar weakness are being bolstered by the second wave of coronavirus sweeping the U.S.

The U.S. recorded 71,750 new infections on Wednesday, close to a new record high, while the total has risen to such an extent that some states are rolling back earlier reopening efforts and investors are growing concerned about American economic recovery prospects.

"The big question is whether the UK continues to look more European in its COVID-19 recovery or starts to look like the USA," Rochester says. "Brexit risk premium remains elevated, but not at historically high levels. We expect September or October to be when negotiations reach a breaking point and UK underperformance kicks back in."

The Dollar was already expected to weaken ahead of November's election but the botched containment of the virus is fomenting an even bleaker outlook for the greenback, which could go some way toward easing Sterling's pain.

But a second wave is also a risk to the UK, which had among the worst outbreaks and where official data suggests the economic burden has been greater than in other major economies. Meanwhile, the question of future trade arrangements with the EU remains wide open as the clock ticks away to a year-end expiry of the Brexit transition, with little progress to show for the talks.

"There is only a weak cross-country correlation between virus-related vulnerabilities and 2020 forecast downgrades. What’s more there is a near-zero relationship between sovereign market performance and virus vulnerabilities," says Gabriele Sterne, head of strategy services and global EM research at Oxford Economics. "We think markets may be underestimating the impact of the virus, in which case investors should look to underweight sovereigns that are more afflicted by the virus, in accordance with Figure 1."

Above: Oxford Economics graph showing order of preference of sovereigns and economies, from left to right.