The Pound-to-Dollar rate surged Wednesday as Sterling outperformed, but gains reflected the ebb and flow of risk appetite and positioning, rather than a fundamentally positive change in the outlook for the British currency.

Americans sold Dollars while buying stocks and all kinds of other risk assets from the North American open on Wednesday including a Pound Sterling they'd mostly eschewed, or had a lesser interest in during prior sessions.

The Pound-to-Dollar rate sprung higher as a result, rising almost a full percent and taking it above the 55-day moving-average at 1.2416 in what some observers might see as a bullish development on the charts.

Pound-to-Dollar gains lifted other British exchange rates too, many of which underpeformed previously, though GBP/NOK was lower for the session.

Technical analysts however, are most interested in if Sterling can overcome the 20-day average at 1.2521, which guards the path to higher levels.

"The 20 day ma guards the 200 day ma at 1.2684 and we suspect it may struggle here," says Karen Jones, head of technical analysis for currencies, commodities and bonds at Commerzbank. 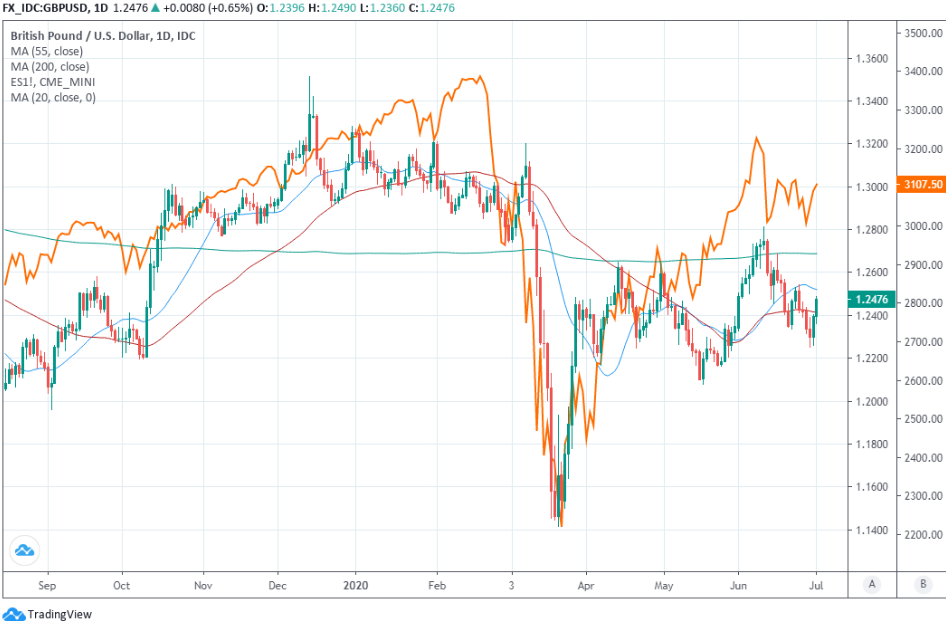 The 200-day average is one of the few remaining impediments keeping Sterling from pre-coronavirus levels up around 1.30 and above, though the rub for the British currency is that there was no fundamentally positive change in the outlook for Sterling on Wednesday, or beforehand.

Stock markets and risk assets gained even as the adverse geopolitical newsflow kept coming thick and fast, with Reuters reporting that Senator Marco Rubio will introduce a bill in the coming weeks that seeks to bar 20 Chinese companies from operating in U.S. capital markets.

This was after the U.S.-China Economic and Security Review Commission found that a "vast expansion" of U.S. companies operating in China since its accession to the World Trade Organization nearly two decades ago endangers American leadership in technological fields.

New coronavirus infections hit fresh highs in some U.S. states including North Carolina and California, but the S&P 500 benchmark climbed.

Those headlines competed for investor attention with further suggestions from President Donald Trump that there's likely to be another large round of 'stimulus cheques' coming this month or after, which boosted risk assets globally but will do little positive for Sterling's battered and bruised UK economy.

"Today GBP has continued yesterday’s moves higher. But with Long GBP positions it's constantly betting on “hope and the outside chance”, but continuously dealing with disappointment," says Jordan Rochester, a strategist at Nomura. "The main risk to GBP shorts is Sunak’s speech on Wednesday next week and if it makes up for the lack of extra fiscal stimulus or capital spending from Boris Johnson yesterday." 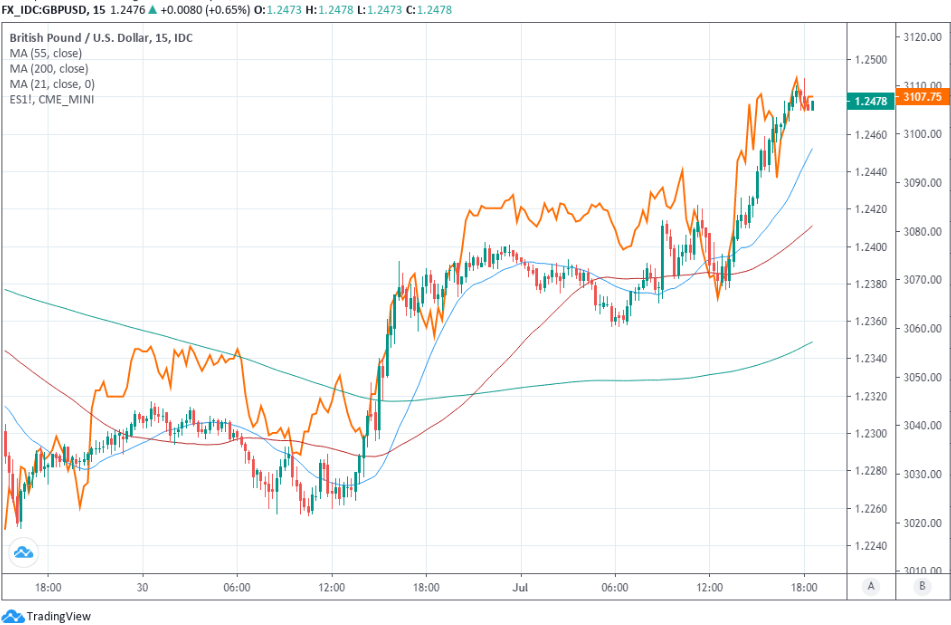 There was nothing positive in Chancellor Angela Merkel's proclamation that the EU needs to be prepared for a possible UK exit from the transition period at year-end without preferential trade terms having been agreed.

"Q2 shows that even in a risk-on environment, the pound was unable to capitalise substantially because of the overwhelming plethora of risks that haunt the UK economy. UK GDP in Q2 was the worst in 40 years, unsurprising given the pandemic, but the risk of a no-trade deal Brexit is compounding fears of an even greater economic hit," says George Vessey, a strategist at Western Union Business Solutions. "Unless progress with UK-EU trade negotiations are made then expect the pound to remain under selling pressure."

Merkel's remarks came after Prime Minister Boris Johnson said last weekend the UK could exit the transition period at year-end without preferential trade terms, just as an "accelerated' round of talks was about to get underway.

"UK sovereignty, over our laws, our courts, or our fishing waters, is of course not up for discussion. Equally we do not seek anything which would undermine the integrity of the EU’s single market," says David Frost, the British negotiator, in a Twitter post last Thursday.

That was before Johnson appointed Frost to the role of National Security Adviser, which he will hold alongside that of Europe Adviser. 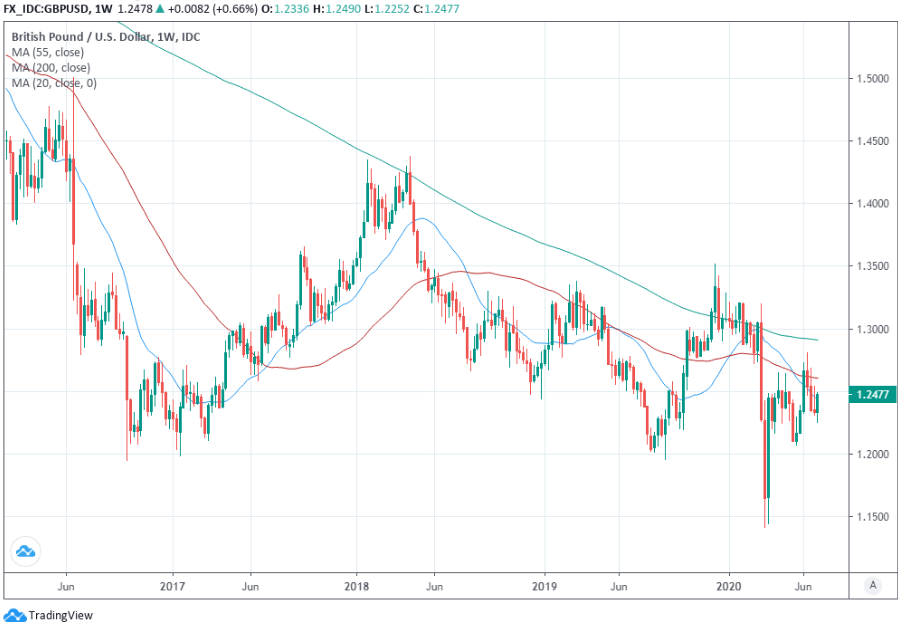 Sedwill was seen in Brexit circles as an ally of people unpopular within them, so to the extent that the "defenestration" and Frost's subsequent appointment were meant as a symbolic statement of intent, it could indicate more deadlock and sightings of another Brexit cliff edge being just around the corner.

"We think that sterling is not reflecting the substantial weakness in the economy we foresee, especially not versus the US dollar. We expect a decline in GBP/USD in the coming months towards 1.20 on the back of risk-off and a downshift in expectations about the UK economy. Towards the end of this year some recovery is possible, but it is likely that GBP/USD will still be below current levels," says Georgette Boele, a senior FX strategist at ABN Amro.

With the UK lagging other countries in contracting and containing the coronavirus and then reopening the economy, a game-changing improvement in sentiment toward Sterling might only be possible through the Brexit trade talks.

But progress might be unlikely given apparently incompatible objectives on each side and the recent rhetoric of Johnson and Frost.

"We expect the UK to be one of the worst hit of the advanced economies given the very severe outbreak there and the lengthy, strict lockdown. This will see GDP falling by 8.5% in 2020, only partially recovering that lost ground in 2021, when we expect growth of 5.2%. A poor Brexit outcome could further dent that recovery, but the outlook in any case is a very weak one," says Bill Diviney, an economist and ABN Amro colleague of Boele's.