- Investors navigating multiple risks to the up and downside.

The Dollar was wavering in Tuesday trade as the Euro-to-Dollar rate and other risk currencies rose amid an upbeat mood among investors although Sterling underperformed again, begging the question of what might happen to the Pound-Dollar rate if the market mood was to darken over the coming days.

Sterling was again wallowing at the bottom of the major currency bucket after extending a nascent run of underperformance to push the Pound-Dollar rate back to the 1.23 handle, despite the greenback itself wavering in the face of just about every other remotely comparable rival. The global riposte was led by the Euro-to-Dollar rate, which accounts for 57% of flows measured by the ICE Dollar Index and was up just less than 0.50% in noon trade.

The Dollar's weakness is, according to some analysts and for the time being at least, a symptom of robust risk appetite across markets although Sterling's weakness was the result of something much more malign. The British currency is now something like 'the sick man of Europe' given that all other major economies are taking steps out of 'lockdown' while the UK is at least three weeks away from an equivalent move, and is also potentially about to suffer a fresh bout of Brexit-related selling too.

"It’s been a volatile overnight session for the broader USD; with the risk sentiment pendulum swinging from negative in Asia to positive in Europe as traders digested conflicting Aussie/China headlines," says Eric Bregar, head of FX strategy at Exchange Bank of Canada. "Traders are trying to bid up GBPUSD with the improved risk tone this morning, but we feel that the market’s negative chart structure is holding it back (bearish head and shoulders pattern on the daily). There has also been steady accumulation in EURGBP over the last week, and we think these buyers will feel even more emboldened should the cross produce a strong NY close above the 0.8780s [1.1389 for GBP/EUR]." 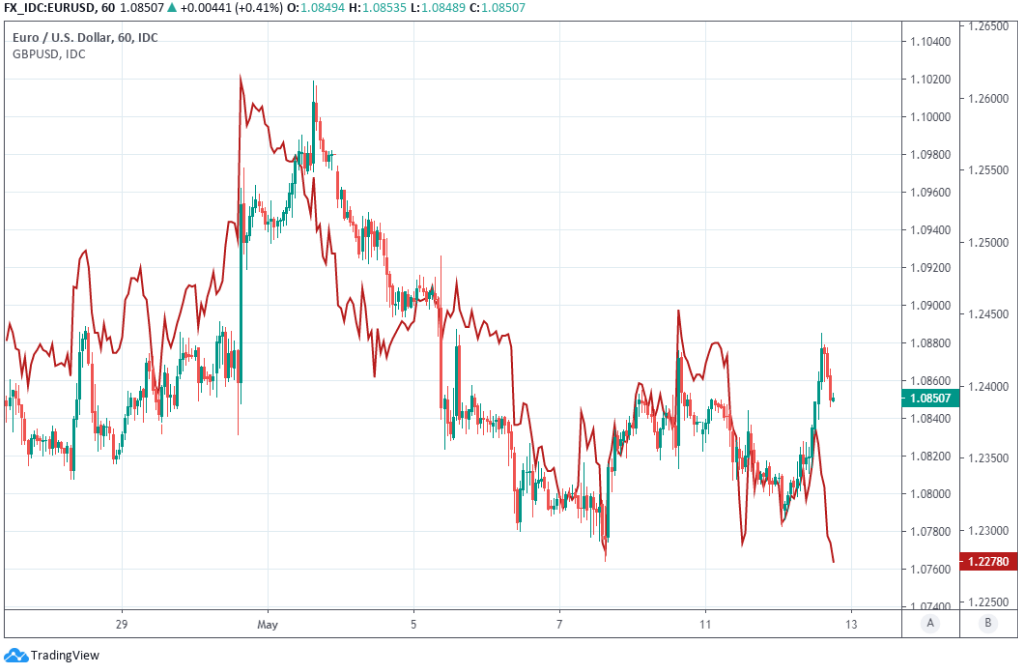 The Dollar entered Tuesday on its front foot but succumbed to widespread weakness heading into the European noon and North American morning, with many analysts attributing the shift to China's decision to waive tariffs on around 79 products imported from the U.S. and to increase its purchases of soy beans in an apparent bid to keep alive January's 'phase one deal' that largely ended the trade war between the world's two largest economies.

This is after President Donald Trump said on Monday he is "not happy" with China and that he has no interest in renegotiating the pact when asked about press reports suggesting some in the ruling Chinese Communist Party would like to reopen talks. The comments came following speculation suggesting China's alleged lack of candour in response to the initial coronavirus outbreak could lead to new tariffs being imposed on the country's exports to the U.S.

"The US is basically asking China to double its prior purchases of services, agricultural, and manufactured goods by the end of 2021 and quadruple its buying of US energy over that time. Good luck with that. The final chapter of the agreement allows for either side to scrap the deal with six days notice. If he does, Trump likely raises tariffs and looks at other measures," says Bipan Rai, North American head of FX strategy at CIBC Capital Markets. "The inverse correlation between the USD and risk still holds, though there are signs of moderation. We remain strategic sellers of possible USD rallies." 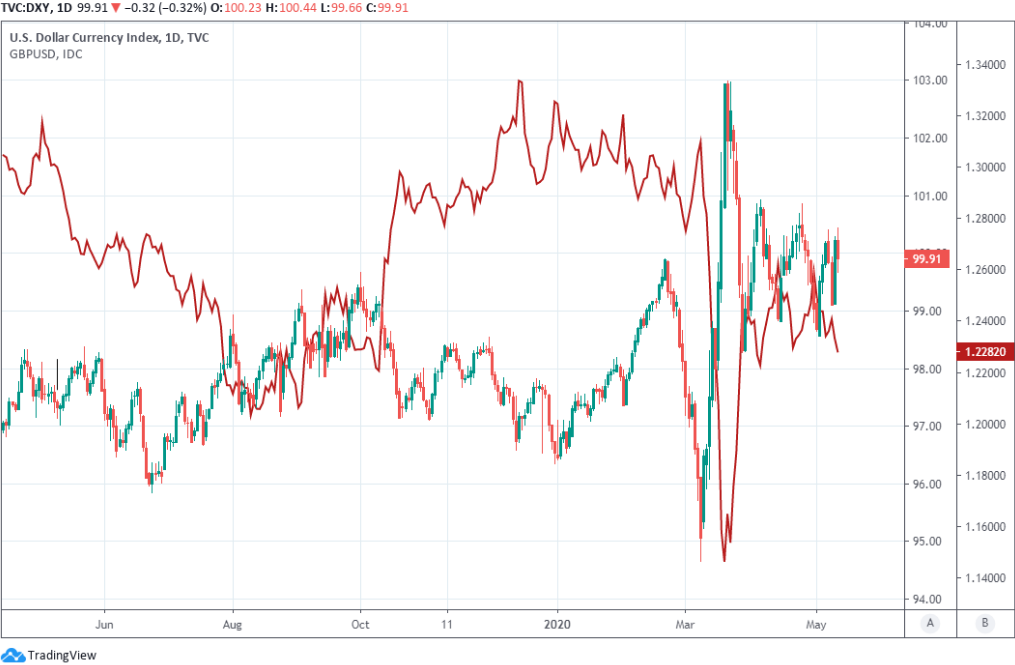 Tuesday's Euro-to-Dollar price action and resulting downside in broader measures of the greenback came with President Trump arguing via Twitter that negative interest rates should be pursued by the Federal Reserve (Fed), just days after pricing of interest rate futures began to indicate that negative rates could be in the pipeline. Trump's tweets were fired off with Fed rate setter Neel Kashkari and a number of colleagues out on the speaking circuit and airing their views on exactly that subject. Federal Open Market Committee members have mostly opposed negative interest rates, although some have caveated their views with circumstances in which they might change.

The Dollar has for the time being an almost unversal correlation with risk appetite that has seen substantially all U.S. exchange rates rise in response periodic bouts of investor unease, which might reflect a pyschological scar caused by the March collapse of global stock, commodity and bond markets that saw the greenback swept higher by a tsunami of international capital that at the time coveted only the unrivalled liquidity and perceived safety of the world's reserve currency.

However, investors are navigating multiple risks posed to the upside and the downside in stock, commodity and currency markets, which has reasulted in choppy price action across the board thus far in the new week. Those risks include the prospect of another wave of coronavirus infections in reopening economies, the odds of a fresh U.S.-China trade war being triggered by the coronavirus and also the spectre of the Fed following the European Central Bank (ECB) into a Frankenstein's monster style monetary policy.

"The higher risk premium for Europe's currency, from which EUR-USD is suffering, should be partially reduced with the economic recovery. More importantly, the former interest rate advantage of the US dollar has permanently shrunk. This does not justify a substantial overvaluation of the USD outside of times of crisis. We continue to expect EUR-USD rates around 1.14 by end-2020," says Ulrich Leuchtmann, head of FX strategy at Commerzbank. "The Corona crisis brought significantly increased volatility to the EUR-USD exchange rate. Nevertheless, we have not changed the EUR-USD forecast." 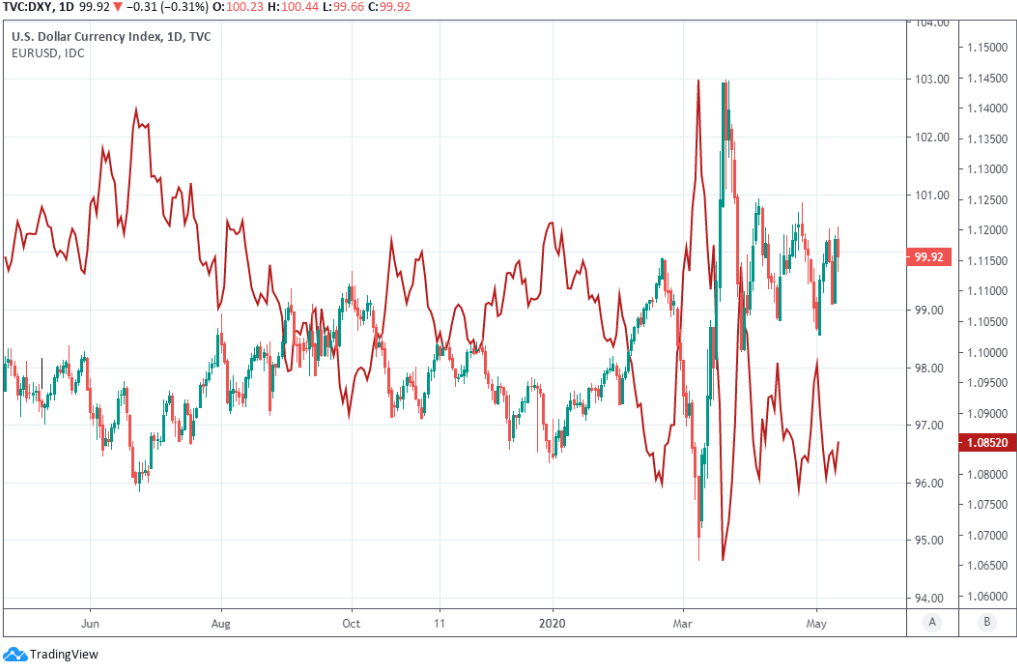