- "U.S. fundamental data, as we have never seen before"
- Jobless claims is key data release today
- Could put USD under further pressure

The data are released at 12:30 GMT, and markets are looking for a figure in the region of 1.6M extra people filling for jobless claims.

This would represent a 33% increase on last week, but according to one analyst this figure is too conservative and the negative surprise has the potential to pressure the Dollar lower today.

"U.S. fundamental data, as we have never seen before, will be published today," says Antje Praefcke, FX Strategist at Commerzbank. "The initial jobless claims - for a long time a set of data that has been treated as the poor cousin, as there was almost full employment in the US for the past years - will put everything else in the shade." 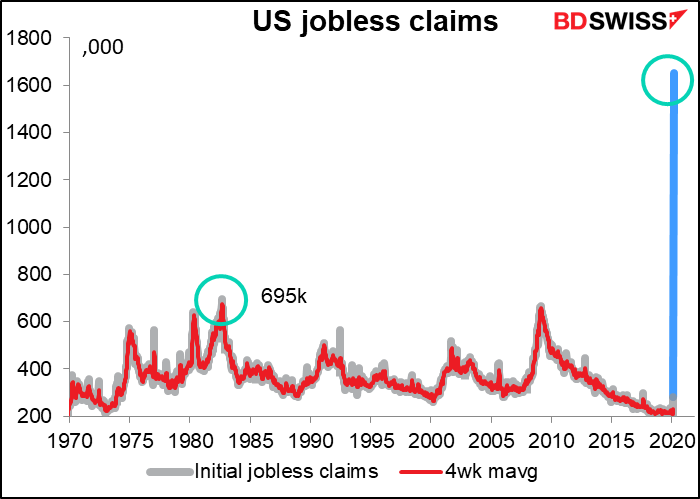 "This is the most up-to-date statistic we have for the US economy as it comes out every week (today is for the week ended 21 March). The market is predicting an unprecedented 1640k claims. That’s more than double the previous record amount (695k, set in October 1982)," says Marshall Gittler, Market Strategist at BD Swiss.

The Dollar's recent softness comes as global financial markets recover from the steep declines that characterised the first half of March. The improvement in market sentiment has come courtesy of the pumping of trillions of dollars worth of money into the global financial system by the world's central banks that has provided lubrication to a system that was fast running out of liquidity.

Therefore, we have a tug-of-war scenario where central bank money is providing support to markets on the one hand but the real economic impact of the coronavirus is unknown. Furthermore, there has been a spike in coronavirus cases recorded in the U.S. with the number of deaths surpassing 1000 suggesting that the fundamental cause of the market selloff is by no means over.

"The short burst of positivity demonstrated over the last two days has begun to fizzle out as markets are reminded of the severity of the pandemic, denting the performances of global bourses," says Nema Ramkhelawan-Bhana, an economist at RMB.

Today's jobless data "offers a first taste of what the economic data will be like in the coming weeks, as the economies worldwide are shuddering to a halt in what reminds me of hitting a brick wall at 200miles an hour," says Praefcke.

Commerzbank is expecting a figure of 3M, which would make the 1.6M expected by markets to be incredibly conservative, "which suggests that the dollar will come under considerable pressure today," says Praefcke. "In particular as the market will have to adjust its expectations for the labour market report for March likewise, which is due for publication at the end of next week."

While the Dollar might come under pressure as a result of the jobless claims, Commerzbank do not yet believe the time of substantial Dollar weakness has arrived as other currencies will over coming weeks be exposed to significant deteriorations in their own data.