PMI survey data showed the country's service sector contracted in February after a reading of 49.4 was released, well below market consensus for 53.0 and this is the first decline in the sector for four years. The Composite PMI - which measures both manufacturing and services sectors - meanwhile read at 49.6. The scale of the disappointment was felt in the U.S. Dollar which is nursing losses of around 0.50% against the Pound and Euro.

“With the exception of the government-shutdown of 2013, U.S. business activity contracted for the first time since the global financial crisis in February. Weakness was primarily seen in the service sector, where the first drop in activity for four years was reported, but manufacturing production also ground almost to a halt due to a near-stalling of orders," says Chris Williamson, Chief Business Economist at IHS Markit, compilers of the PMI report.

The country's Manufacturing PMI meanwhile read at 50.8, which was a disappointment against expectations for a reading of 51.5 to be announced.

The disappointing U.S. PMI surveys contrast with those released out of the UK and Eurozone this morning, where expectations were beaten. Exchange rates have tended to reflect the relative economic outperformance of one country over another thus far in 2020, which helps explain why the Dollar is outperforming its peers.

The U.S. economy continues to enjoy superior growth rates to the rest of the world, but today's PMI data casts a little doubt over the assumption.

"The February flash PMI data for Germany, the UK and the Eurozone all beat consensus expectations this morning, which led to relative strength for EUR and GBP across the board," says Erik Bregar, Head of FX Strategy at Exchange Bank of Canada. 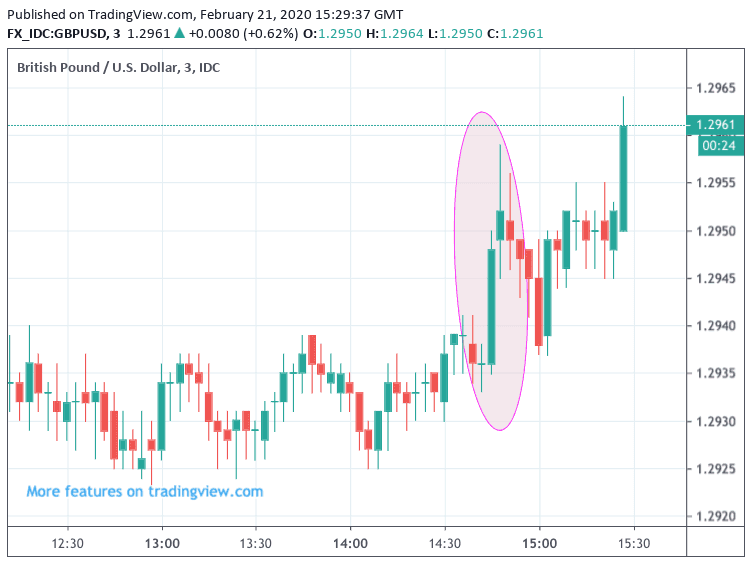 Above: Sterling-Dollar reacts to the data release.

"Private sector firms across the U.S. signalled a slight decline in business activity in February. The overall contraction was driven by a notable worsening of service sector performance, where output fell for the first time in four years," report IHS Markit, commenting on the Services PMI release.

According to IHS Markit, new orders received by private sector firms fell for the first time since data collection began in October 2009.

The fractional decline in new business stemmed from weak client demand across the service sector and the slowest rise in manufacturing new order volumes for nine months.

“Total new orders fell for the first time in over a decade. The deterioration in was in part linked to the coronavirus outbreak, manifesting itself in weakened demand across sectors such as travel and tourism, as well as via falling exports and supply chain disruptions. However, companies also reported increased caution in respect to spending due to worries about a wider economic slowdown and uncertainty ahead of the presidential election later this year," says Williamson.

IHS Markit's economists say the survey data are consistent with GDP growth slowing from just above 2% in January to a crawl of just 0.6% in February.

"However, the February survey also saw a notable upturn in business sentiment about the year ahead, reflecting widespread optimism that the current slowdown will prove shortlived,” says Williamson.