- But data is a lagging indicator, Friday's PMIs more important.

- Market continues to weigh prospect of BoE rate cut to 0.50%.

- Nomura remains 'long' in anticipation of an economic recovery.

The Pound-to-Dollar rate's New Year sell-off could be over already according to some strategists, who say momentum behind Sterling's lurch to the downside has been disappointing and that risks are now tilted to the upside.

Pound Sterling rose against all major rivals Tuesday as investors rewarded December jobs figures that revealed lower-than-expected unemployment claims and wages that grew faster than consensus had banked on.

Resilience in the jobs markets, which is a 'lagging indicator' of the economy, has removed one threat from the radar of Sterling although the British unit will still be tested by Friday's flash PMI surveys of the manufacturing and services industries from IHS Markit. They and the January 29 autumn forecast statement will be key in determining whether the Bank of England (BoE) responds to recent economic weakness with an interest rate cut on Thursday 30, January.

"The price action in GBP/USD has not been as optimistic as we expected but it’s remarkable how supported GBP has been in recent sessions around 1.30 despite a) Sajid Javid comments on EU divergence b) further BOE rate cut pricing c) risk off in Asia due to China virus concerns," says Jordan Rochester, a strategist at Nomura. "So what if one of those negatives became a positive?" 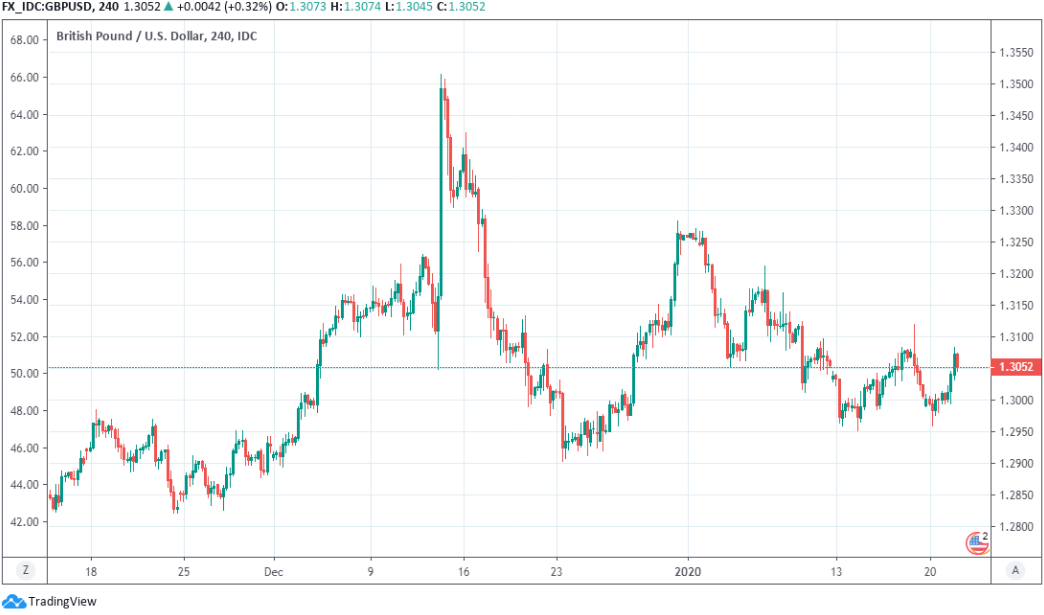 The Pound had been wounded on Monday after Chancellor Sajid Javid claimed the UK will not be left a "rule taker" by the future relationship agreement the government hopes to strike with the EU. Javid also said before a regular meeting of EU finance ministers there would be "no alignment" with Brussels' rules on goods and services after the end of the transition period, which is currently expected to run between January 31 and year-end.

Analysts and economists say the UK will face greater barriers to trade with the EU if the government sticks to its current line that it wants the freedom to set its own policy path rather than following the directives that emerge from Brussels in the future. And such lesser access could lead to slower economic growth if it's not made up for by enhanced access to other markets, although Sterling has since rebounded from the lows reached in the wake of Javid's comments.

"Risk reward is not in favour of chasing GBP lower into a rate cut: With the BOE rate cut priced with a 66% chance, the risk reward is that they delay their decision until later this year to evaluate how the data and fiscal stimulus plays out. GBP/USD would naturally head higher as a result. It’s a strong view of ours that if the BOE do cut rates as our Econ team expect, that would likely represent the low in GBP,"  Rochester says.

Sterling is among the worst performing major currencies for 2020 after failing to sustain its election-related upward momentum, while declines were hastened last week by GDP, inflation and retail sales figures that effectively sounded the UK's economic alarm bells. The economy contracted by 0.3% in November, taking the annual rate of growth down to 0.6%, which is far below the economy's estimated 1.25% inflation-producing rate of expansion. 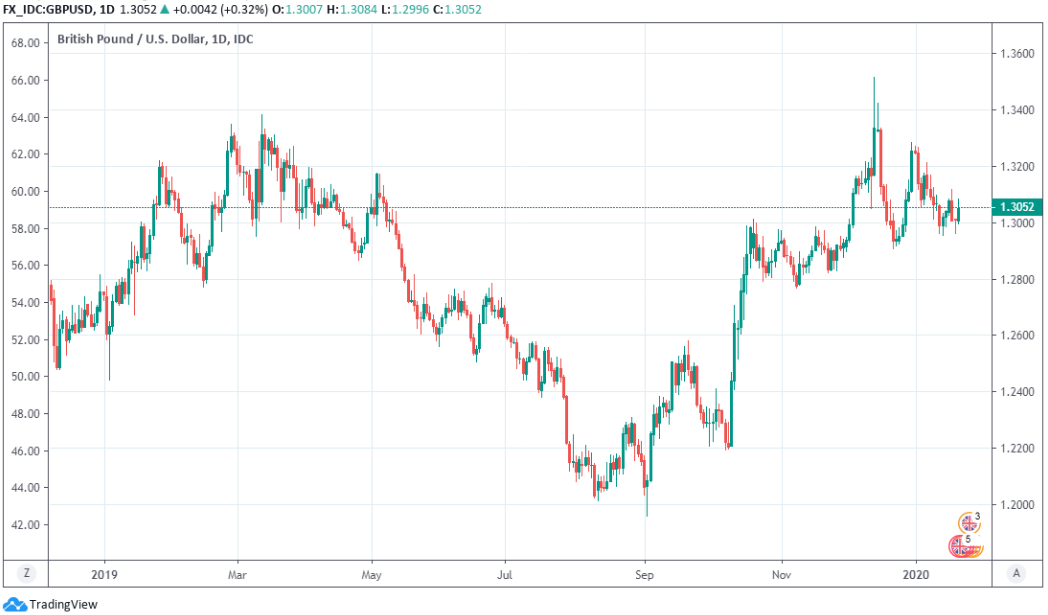 Investors scrambled to price-in a rate cut last week because with inflation of 1.3% already below the BoE's 2% target and the economy slowing further, the Monetary Policy Committee could feel compelled to take action even if only to be seen to be seeking to support growth and deliver the inflation target. However, Sterling has been quick to find support near to the 1.30 level in each sell-off, leading some to doubt it can go much lower in the short term.

"Since we published the recommendation the front short-sterling futures contract implied yield has dropped 12ps and since 8 th January has dropped 18bps. However, the impact on FX has been much more muted than we expected," says Derek Halpenny, head of research, global markets EMEA and international securities at MUFG " The front OIS MPC contract indicates a cut is nearly fully priced and hence it is hard to see GBP/USD falling to our target level...we don’t see as much in this trade from here."

Halpenny, who leads the EMEA global markets and international securities division at the world's fifth largest bank, told clients Friday to walk away from an earlier bet against the Pound-to-Dollar rate that had been advocated by MUFG. The trade was live for only a week and had already made a profit but the momentum behind Sterling's downward moves has left the FX research team doubtful that its target level of 1.28 will be seen any time soon.

"We established this last week on the basis of GBP depreciation in conjunction with increased pricing of a rate cut as soon as the end of this month," Halpenny says. "While we expect the BoE to cut this year (our view was May), and it’s clearly a close call for 30th Jan, a sharp bounce in the PMIs next Friday would see expectations pared dramatically. We see that as a plausible scenario given the CFO Sentiment Indicator last week recorded its largest gain on record. We’ve cut this position with a small profit." 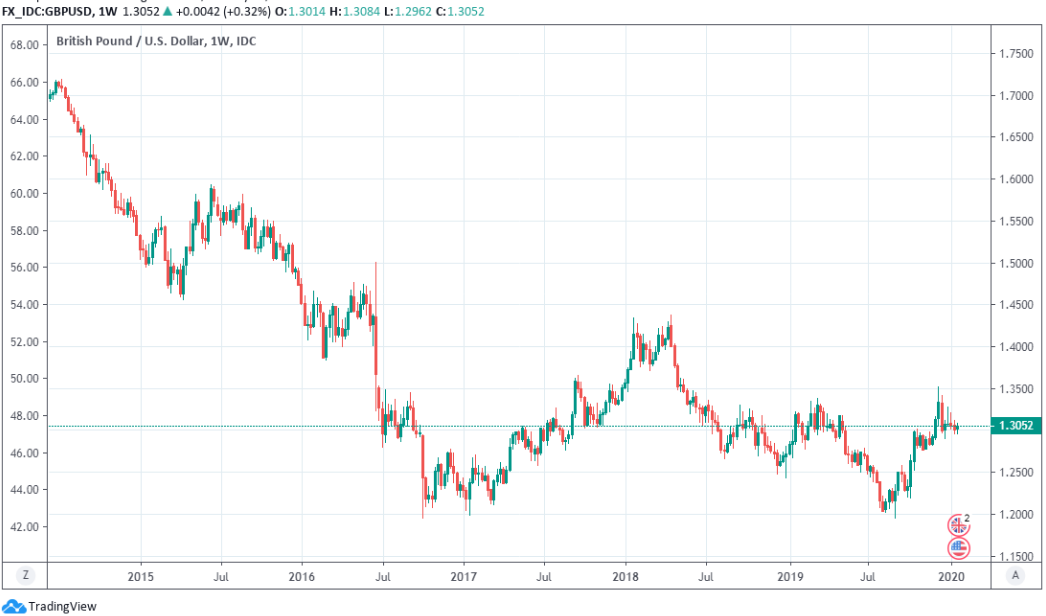 With the Pound having stabilised above the 1.30 level on Tuesday, all eyes are now turning to the release of flash PMI surveys at 09:30 on Friday. IHS Markit revised down December's numbers at the beginning of this month, sparking concern among economists, but similar barometers for the Eurozone and U.S. have since surprised on the upside and led some in the market to suspect the UK's indices could also turn higher this week too.

A rebound in the IHS PMI surveys might lessen the pressure on the BoE as well as Sterling but disappointing numbers might not necessarily harm the British currency because a rate cut is now almost fully baked into the price of Pound Sterling. In other words, markets would need to price-in even further cuts to Bank Rate in order for the policy outlook to weigh meaningfully on the Pound.

This, and the January 29 autumn forecast statement explain why the risks could now be very much to the upside for the Pound. That statement will give markets a sneak peak at a budget that's widely expected to yield a large fiscal stimulus that could ultimately lift expectations for growth in the years ahead and reduce the perceived need for assistance from the Bank of England. Although some do maintain a bearish view on the short-term outlook for the Pound.

"The post Dec election GBP bounce proved very short-lived (largely due to PM Johnson’s refusal of the transition period extension) and risks to GBP are now skewed to the downside. With UK economic data remaining soft and inflation further dropping below the target, the case for a BoE cut is rising. The key will be the Jan UK PMIs (24 Jan). In the absence of a rebound, the BoE is likely to cut rates at the 30 Jan meeting already. Dovish comments from MPC members points to a low bar for a rate cut," says Petr Krpata, chief EMEA strategist for currencies and bonds at ING, who forecasts a Pound-to-Dollar rate of 1.28 at the end of January and 1.26 at the end of March.