The Dollar was riding high near the top of the major currency class Tuesday as the case for more Federal Reserve (Fed) rate cuts appeared to weaken ahead of the December inflation report and Wednesday's eagerly-anticipated signing of the much-vaunted U.S.-China trade deal.

At 1.75% the Fed's interest rate is still the joint highest in the developed world with only the Bank of Canada cash rate able to match that available in the U.S., and with tensions between the U.S. and China de-escalating progressively in recent weeks the Dollar bears are now increasingly struggling to make the case for further cuts in the benchmark over the short-term.

This is a leading factor as to why the currency is tipped to remain supported going forward.

The Pound-to-Dollar rate was down 0.11% at 1.2968 and has now fallen more than 1% in the last week and 2.5% over the course of the recent month. The Dollar was higher against all other than the Swiss Franc, which bested all of its major counterparts, and Australian Dollar on Tuesday. The Aussie is sensitive to changes in the global growth outlook not only because of its exposure to natural resources but also because of Australia's economic links with China.

"The US dollar seems to continue to default to the strong side, and given all that the Fed has thrown into the punchbowl to weaken it, USD bears should be alarmed until or unless the Fed continues to up the game," says John Hardy, chief FX strategist at Saxo Bank. 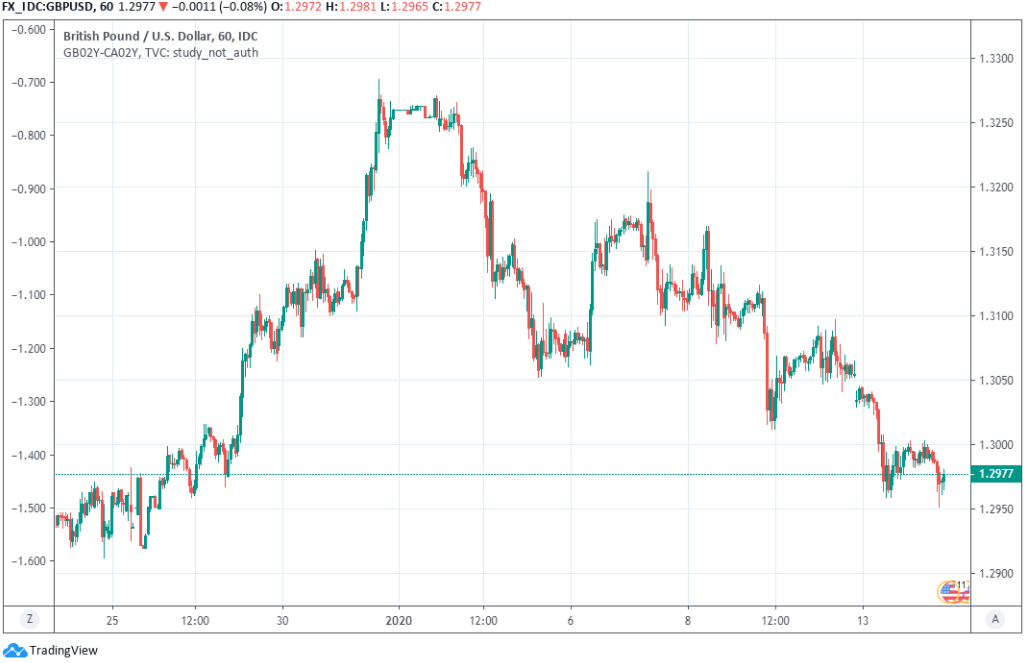 This was after the U.S. Treasury did away with its designation of China as a 'currency manipulator' in its latest report on the macroeconomic and foreign exchange polices of major trading partners. It comes barely a day before President Donald Trump and Chinese Vice Premier Liu He, who arrived in Washington overnight, sign the 'phase one deal' struck back on October 11.

"December CPI is expected to accelerate further above the 2.0% level today. Coupled with the upcoming US-China Phase One deal, the case for an imminent and meaningful easing cycle from the Fed is decreasing. This should be supportive of USD particularly vs its low yielding G10 FX alternatives such as the euro or the yen - as the dollar should retain a meaningful carry advantage," says Chris Turner, head of FX strategy at ING.

Wednesday's deal has already averted one round of new tariffs and is expected to see a small portion of the levies imposed on either sides exports removed, which is throwing the U.S. and global economies a lifeline. Both have been hurt by the trade war but the U.S. growth engine has remained in better condition than its counterparts overseas and Wednesday's deal is expected to further weaken the argument for additional rate cuts from the Federal Reserve.

The Fed cut rates three times in 2019 and investors are still betting that one 2020 cut is almost certainty but that conviction could faulter Tuesday if inflation numbers surprise on the upside for December when released at 13:30. Despite all the talk of slowdowns the U.S. is growing close to its 'trend' or inflation-producing rate and tariffs have lifted costs for companies in recent quarters so risks to this year's numbers are in general, to the upside. 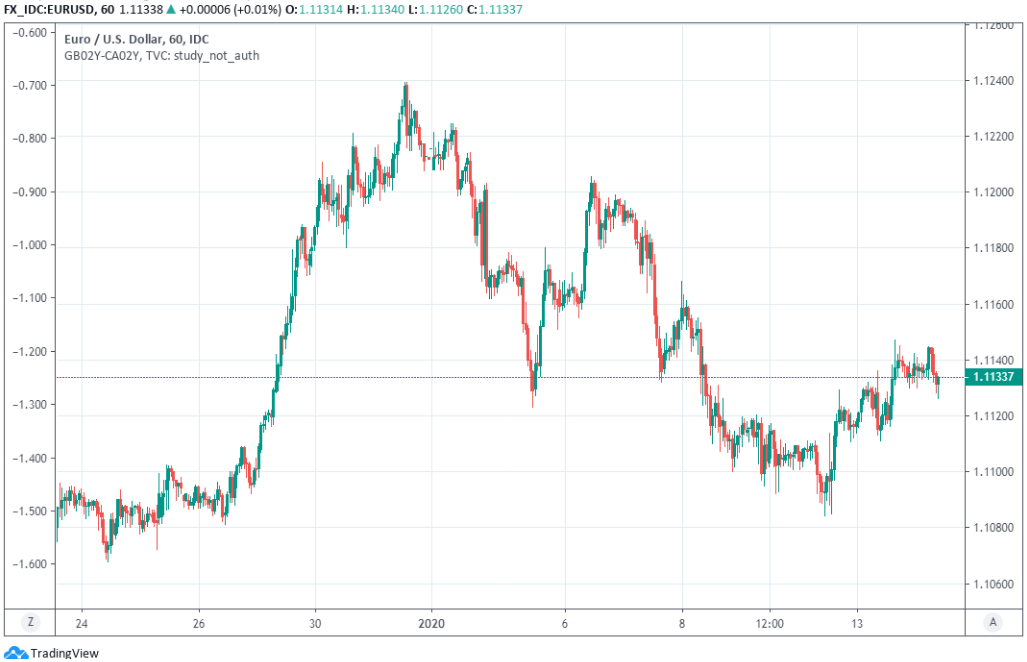 "Our base case is a 0.2% increase in December's core CPI, but upside risks abound," says Ian Shepherdson, chief economist at Pantheon Macroeconomics. "We aren't worried that tariffs are about to drive up core inflation to an alarming pace. But they are making a difference in some components, and they add to the case that core inflation is much more likely to rise than fall this year."

Both headline and core measures of U.S. inflation are already above the Fed's 2% target although the central bank's own guidance suggests strongly that won't respond to price increases with interest rate hikes any time soon. However, that might not be necessary to boost the greenback in the short term because current market expectations are for at least one rate cut that's becoming increasingly difficult for Dollar bears to justify and investors abandoning that conviction would be positive for the currency.

December's inflation numbers are out at 13:30 Tuesday and pricing in the overnight-index-swap market is implying that on December 16 the midpoint of the 25 basis point wide Fed Funds rate will sit at 1.31% when it's currently set at between 1.5% and 1.75%. That suggests that investors see not only one rate cut as a certainty but also that there's some scope for a second, although Tuesday's inflation figures will have an impact on expectations for the year ahead as well as Dollar exchange rates.

"While the US growth story has ebbed, the ROW still lacks acceleration. As a result, we think it's too early to signal a top in the USD and think there's a bit more room for consolidation over the coming weeks. Again, that's mostly against the safe havens and low-yielders," says Mark McCormick, head of FX strategy at TD Securities. "We expect the "big" USD turn to start in Q2, which leaves EURUSD finishing around 1.20 by yearend." 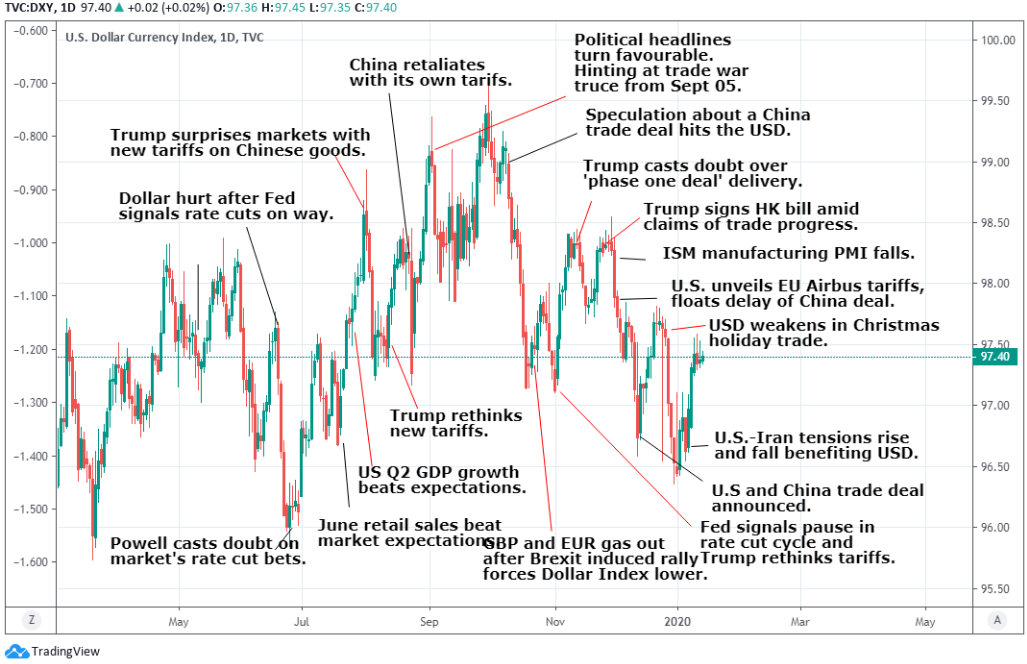