- May lift the USD Vs low-yielding rivals like EUR, JPY and CHF.

- GBP transfixed by Thursday election, is vulnerable from here.

The Dollar advanced on some low-yielding rivals Wednesday, tipping the Dollar Index higher even as other riskier rivals got the better of the U.S. currency ahead of the final Federal Reserve (Fed) interest rate decision of 2019, which could provide the greenback a further tailwind of support in the days ahead.

Consensus is looking for the Federal Open Market Committee to leave the Fed Funds rate unchanged in its current range of 1.5%-to-1.75% Wednesday, which will leave markets looking to the accompanying statement and new round of economic forecasts for clues on the outlook for rates and the Dollar.

The Fed will announce its decision at 19:00 and publish its final quarterly economic projections at the same time, before Chairman Jerome Powell holds a press conference at 19:30. And the nearing prospect of the announcement helped the Dollar stabilise in the morning session.

Shepherdson says that either Fed policymakers or the market will be wrong in their expectations for interest rates up ahead and that it could be a while before views of the two camps begin to marry up because recent economic data has not done enough to shift opinions in one direction or another.

The decision comes with markets still betting the Fed is not yet finished cutting rates, which it has done three times this year after having lifted them hastily through 2018 in response to inflation that rose and remained above the 2% target. It also comes just days out from a White House decision on whether to hit China with fresh punitive tariffs, which is also a Dollar-supportive risk. 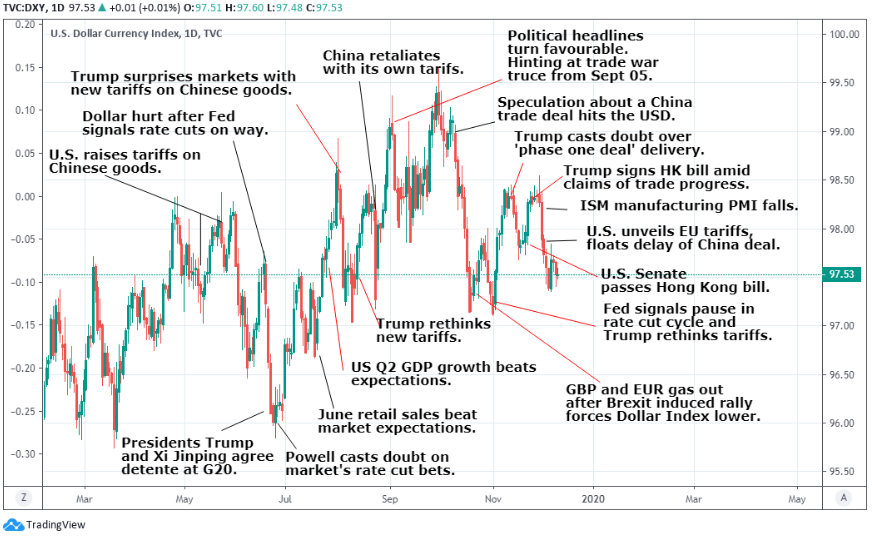 “The FOMC has made it clear that it is happy with where rates are, so the main issue is cleaning up the SOEP and Statement,” says Stephen Gallo, European head of FX strategy at BMO Capital Markets. “In the event of a hawkish error, we think there could be a hard rebound in USDMXN to something like 19.60. In the event that Powell comes across as shockingly dovish, USDJPY could break 109.00 and make a quick run to 109.40.”

Markets will scrutinise the Fed’s language intensely on Wednesday but the bank has little if-any reason at all for ‘dovishness’, which could mean its policy statements and Chairman Jerome Powell’s comments ultimately end up providing the Dollar with support into the weekend as investors are again forced to moderate their expectations for rate cuts in the months ahead.

After all, Friday's November jobs report was a blowout, with 266k new jobs believed to have been created that month - the highest since December 2018. This was after the initial estimate of third-quarter growth was revised higher, revealing that the economy gained a head of steam last quarter rather than slowing like many thought. Meanwhile, inflation rose from 1.7% to 1.8% in October and markets are looking for November’s numbers, due out at  13:30, to take the consumer price index up to the Fed target of 2%.

Such gains in prices, jobs and the economy are hardly a recipe for panic at the Fed, which has cut rates this year in the hope of protecting the U.S. economy from an ongoing global slowdown that’s already bitten the American manufacturing sector and may yet hurt other sectors. 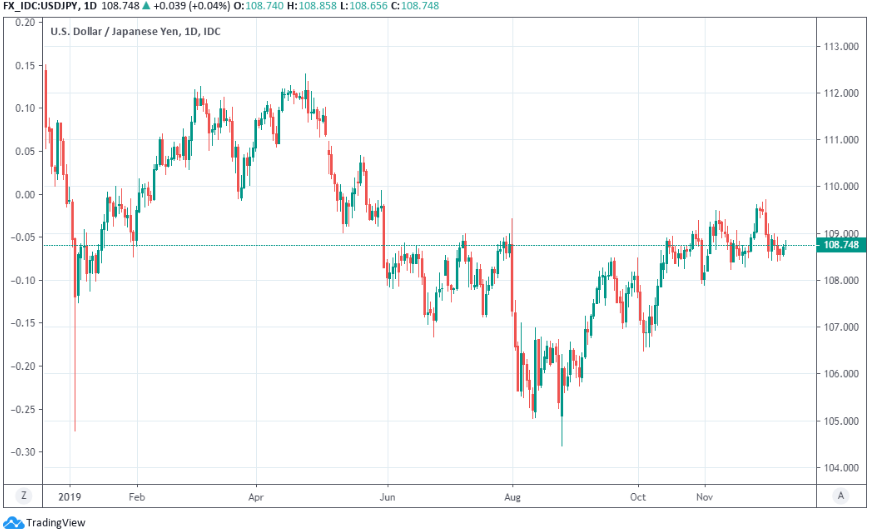 Of all the analysts and firms followed by Pound Sterling Live, none are suggesting that these factors even when combined, would be enough to meet the high bar additional interest rate cuts that has been set by the Fed since the end of October. The Fed said on October 31 that it would take a “material reassessment” of its modestly upbeat outlook to change its view that the current level of rates is appropriate.

“If the Fed signals that the introduction of further tariffs - which we might see next Sunday - would constitute a reason for further rate cuts, this might get interesting towards the end of the week and we might see some movement in USD exchange rates,” says Thu Lan Nguyen, an analyst at Commerzbank.

The Dollar now enjoys the joint-highest interest rate of all major currencies. This and its safe-haven quality mean the greenback is still an attractive proposition to many investors and for that reason the U.S. currency retains an edge over lower-yielding rivals like the Euro, Yen and Swiss Franc.

Those low yielders would be the first to suffer overnight and when when London wakes up Thursday if the Fed says anything that comes across to the market as ‘hawkish’, which would be enough to lift the Dollar index because the three rivals account for around two-thirds of the benchmark. Pound Sterling, meanwhile, is middle-of-the-road in interest rate terms and set to remain transfixed by the possible implications of Thursday's election. 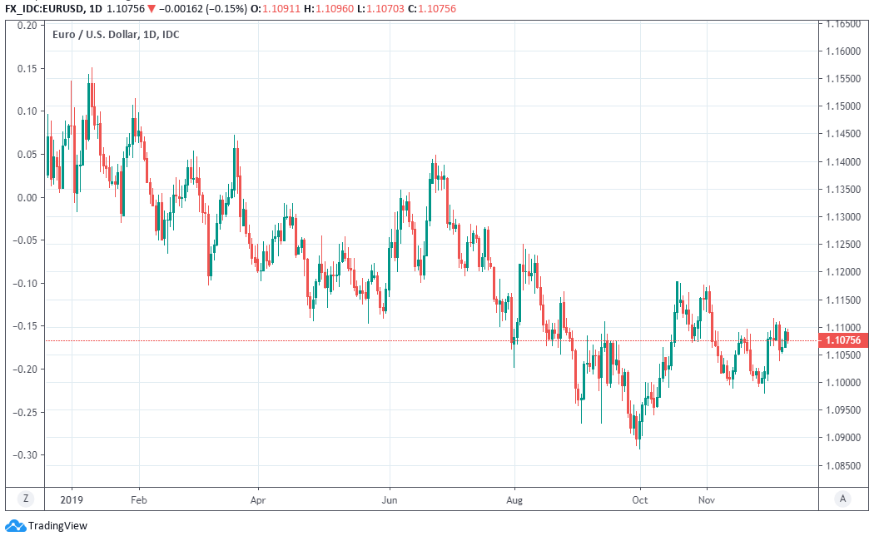 The Fed cut rates a third time in October, leaving the Fed Funds rate at 1.5%-to-1.75% and bang in-line with Canada's cash rate, while since then Powell and other policymakers have said several times the economy and interest rates are in a “good place”. However, markets were on Wednesday still betting the bank will cut on as many as two more occasions by June 2020 and that there's a chance one of these cuts could come before the end of March.

Pricing in the overnight-index-swap market implied on Wednesday that the midpoint of the Fed funds range would sit at 1.50% on March 18, 2020. That's the day of the second 2020 Fed meeting and many would say it suggests something close to a 50% probability of a rate cut before then.

The decision comes ahead of a Sunday deadline on which the rest of China's annual exports to the U.S are due to be clobbered by a 15% tariff, although this time the levies will hit consumer goods and so could be felt by American households. Those tariffs would deliver a blow to the global economy but could support the Dollar because of the adverse impact on other currencies.

"EURUSD is trading right at the mid-line of the last two months of price action and trying to find a pulse over the FOMC and ECB meetings today and tomorrow after recent record lows in shorter- and longer term options implied volatility. The recent bearish reversal in USDJPY not getting any support from higher bond yields and strong equity markets – but still impressed that we are trading below 109.00 despite the strong US jobs report Friday. Ten-year JGB’s trading above 0% are part of that story," says John Hardy, chief FX strategist at Saxo Bank. "Sterling is sharply weaker on one of the more influential polls suggesting a tightening of the race and the chief question here is the immediate size of the relief rally in GBP on the consensus outcome of a [Conserviative majority]. I would suggest around 1.3500 in GBPUSD." 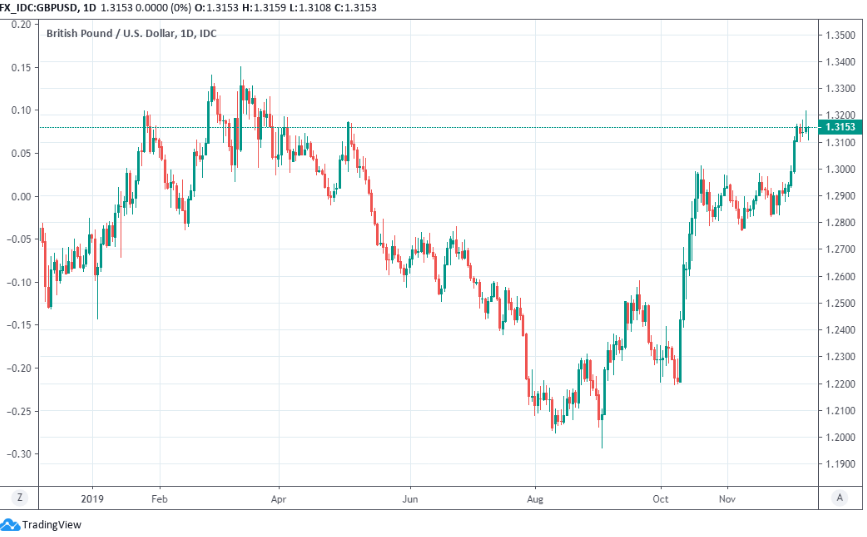