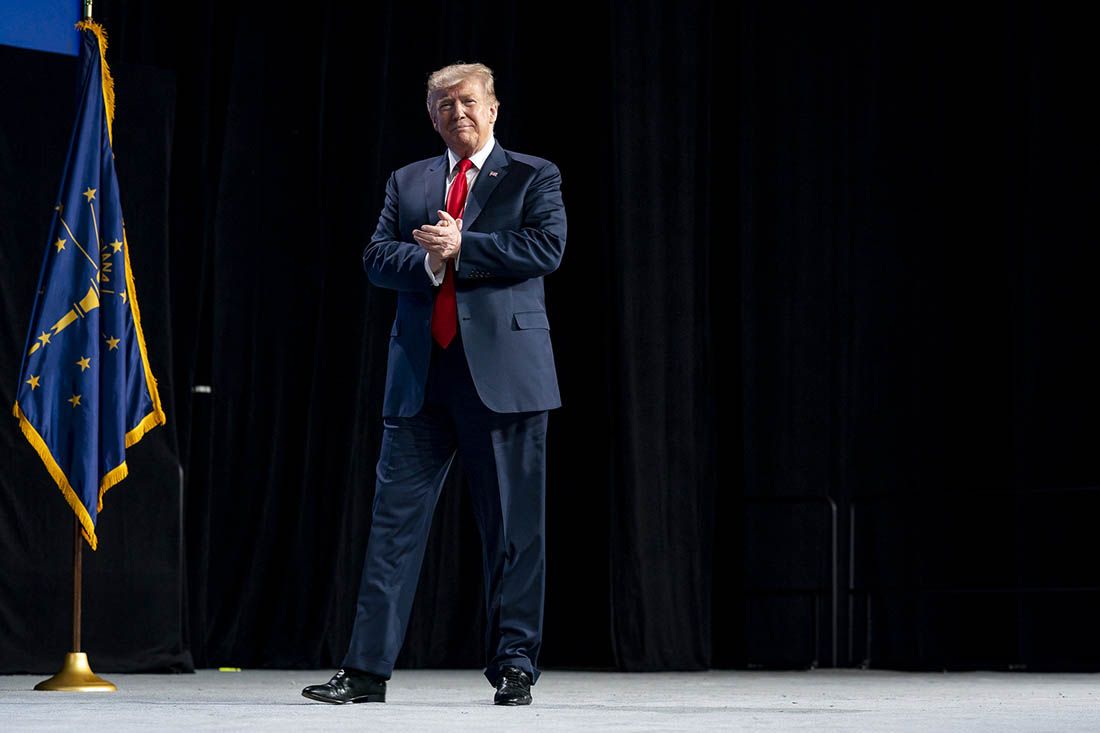 - USD hands earlier gains back to the EUR, GBP and JPY.

- Dragging the USD index lower, but the downside is limited.

- USD strength has roots in Trump's tariffs and his tax reforms.

The Dollar index softened Wednesday as major rivals recovered from earlier losses but weakness is unlikely to be sustained for long until some time in the new year, analysts say, when the greenback could be squeezed by both a global economic recovery and the 2020 presidential election.

Dollars were sold and the Euro, Pound and Japanese Yen bought in exchange Wednesday, which dragged the Dollar index lower by a fifth of a percent, but some analysts say the downside will be limited for the time being by the resilience of U.S. bond yields. Those are still proving attractive to investors even after three interest rate cuts from the Federal Reserve (Fed) this year.

"The US dollar and US yields are sharply higher over the last session, even as the Chinese yuan is stronger still. Risk conditions are suggesting max complacency, particularly for EM, driven in part by hopes for a US-China trade deal. But a note of caution for EM traders as the US dollar and US yields firm here, in general, a phase-one trade deal may already be in the price." says John Hardy, chief FX strategist at Saxo Bank. 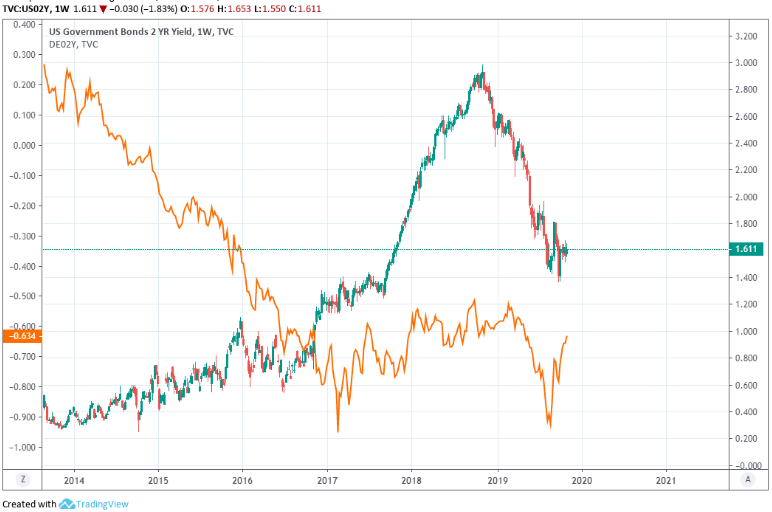 Tuesday's downward lurch by the Dollar was driven in large part by the Euro, which accounts for more than half of the index, as it gained in the wake of data that has helped shift some of the economic gloom hanging over the continent. And it comes in the wake of Tuesday's solid Institute for Supply Management (ISM) services PMI in the U.S., which helped dispel fears of an imminent crunch in the world's largest economy and fueled a rally in the Dollar.

The Dollar has been volatile this week as markets digest a raft of trade-related developments that will have implications for the entire global economy. President Donald Trump was reported this week to be considering cancelling some of the tariffs imposed on imports from China back in September, just days after Commerce Secretary Wilbur Ross said in an interview the White House might decide against imposing punitive levies on imports of cars from Europe.

"EURUSD reversed hard yesterday, in part inspired perhaps by the strong rise in US yields and hopes that the US economy will avoid a recession. It’s an uncomfortable spot for EURUSD bulls who were looking at the critical medium-term upside pivots just two sessions ago and now staring down the local downside pivots. The recent rally was large enough that the move higher is not yet in danger, but a close below the 1.1000 level – not only a psychological level but also near the 61.8% Fibo of the recent rally wave – begins to suggest a wipeout for bullish hopes," warns Saxo's Hardy. 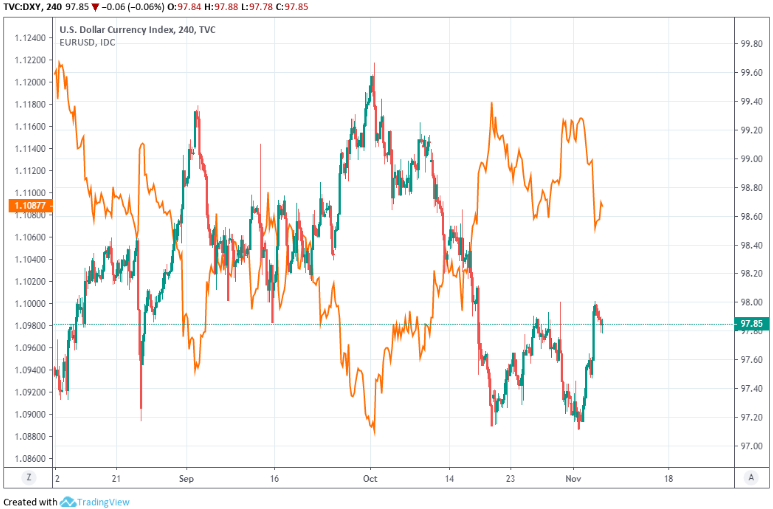 The trade developments are good news for the U.S. as well as global economies and might also be good for the Dollar in the short-term. They came as the White House is attempting to finalise a 'phase one deal' agreed in principle with China on October 11, which has already averted one tariff increase and could yet prevent a new round of levies being imposed on imports from China on December 15.

Trump is thought to be keen to put the trade war on hold at least until after the election so if a deal is firmed up in the coming weeks it could provide breathing space to the Fed, which will mean lesser risks to those yields that have been propping up the Dollar of late. But it'll also provide a battered and bruised global economy with space too which means, sooner or later, growth overseas might pick up enough for other currencies to then challenge the greenback.

"Judging from the renewed decline in EUR/USD and the bounce in DXY, the price action suggests receding trade tensions could be dollar positive. Certainly even after the recent easing from the Fed, the yield differentials favouring the US dollar remain compelling," says Fritz Louw, a currency analyst at MUFG. "The rates environment will likely prove supportive for the US dollar and breaking above the 98.000 DXY level is feasible. However, as implied above, this view holds for now but more robust evidence of recovery abroad, or in the euro-zone specifically will likely see that rates/FX correlation break down." 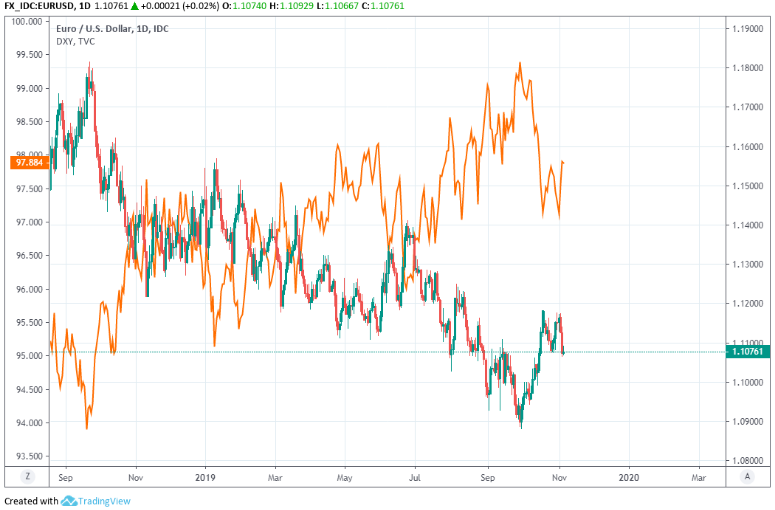 This week's events have in some ways left Autumn 2019 appearing to retread the geopolitical and economic contours marked out by the same period of 2018. Around this time last year a substantial part of the analyst community was reiterating earlier forecasts of a Dollar decline through 2019, premised on the idea the global economy would emerge from the slowdown that began to take hold in the second half of 2018 and grow faster as the New Year unfolded.

"The data are not proving as bad as feared. Indeed the last time the ISM Nonmanufacturing survey was averaging around 54-55 was in 2016 when the US economy was expanding by 1.6% - while this is still subdued growth it will certainly put recession fears to rest for now," MUFG's Louw says. "We maintain the pricing in of a democrat in the White House would be dollar negative and remains a downside risk as we proceed toward greater focus on US politics."

Many of the 2018 projections for a Dollar decline were made or reiterated as hopes built that a November summit would produce a ceasefire in the trade war, but were subsequently undermined by more transatlantic economic divergence and a renewal of the tariff fight this year. November 2018's detente never did last but this time around those looking for a Dollar decline in the New Year will have an ace card up their sleeve in the form of the November 03 presidential election. That's only going to get closer. 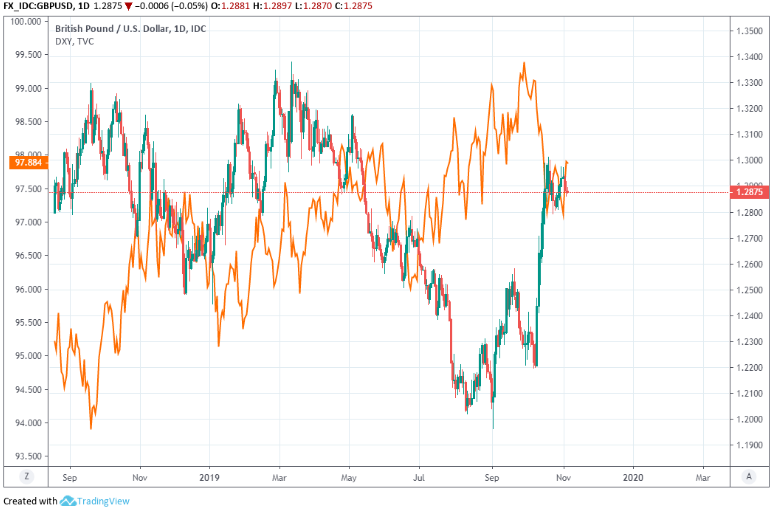 The transatlantic economic divergence that has driven investors out of other currencies and herded them so effectively toward the Dollar in the last 18 months has its roots in President Donald Trump's tax reforms of 2018 and his trade war with China. Tax cuts boosted U.S. growth, that year at the same time as tariffs hobbled the global economy and badly wounded the factory-heavy Eurozone economy. As a result, anything that suggests a tight 2020 presidential race or a Trump defeat next year would likely be taken badly by the Dollar.

Sterling's price action since the final weeks of October demonstrates well that currencies aren't normally fond of elections even when there's upside to be had from the right result with only limited downside upon a bad one. With the idea of a 'no deal' Brexit now buried in the dirt by a no-longer-tough-talking Prime Minister Boris Johnson, the downside for the Pound after December's election might be more limited than it would have been just a few weeks ago but Sterling's rally has been stopped in its tracks.

"With the US presidential election now under one year away, we will likely see a gradual increase in US politics as we move forward, especially with impeachment proceeding in the House and a likely case on forcing President Trump to release his tax returns heading to the Supreme Court. Yesterday, there were four state legislative elections," Louw says, in a note to clients Wednesday. "Last night’s election results suggest damage is being done." 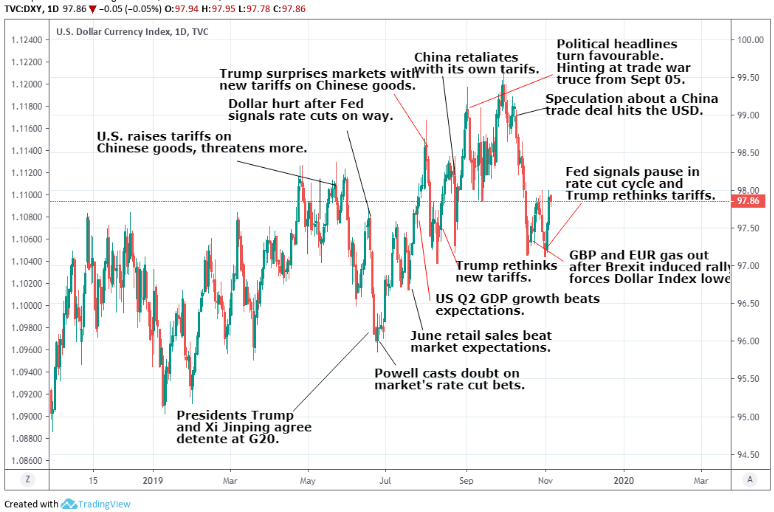 Above: The Dollar Index shown at daily intervals and annotated for recent events.

Trump has been beset by scandal and although much of it has appeared confected and consequently been of little relevance to the market, the opposition Democratic Party is gaining momentum in its efforts to impeach the President and local election results incoming on Wednesday have demonstrated that the furore over various alleged indiscretions and incidents might possibly have had an impact on public support for the president.

Republicans snatched victory from the jaws of defeat in the Kentucky governorship race Tuesday but it took a fly-in from Trump on Air Force One in order to achieve the narrowest of wins in what has been described by many at various points as one of the most Republican states in the country. West Virginia has also traditionally been a very strongly Republican place but entire Virginia state has since the 2016 election, come under the control of the Democrats.

"The Democrats have full control of the state for the first time in 26 years. Polling results suggest suburban voters in republican states are turning against President Trump with the election in Virginia the third indicating losing support for the Republicans since Trump became president," Louw says.