- Comes amid reports the U.S. could rollback China tariffs.

- But services companies are still worried about outlook.

- And some analysts see writing on the wall for the USD.

A much-watched measure of economic performance surprised markets and came in stronger than markets were expecting on Tuesday, leading the U.S. Dollar to advance against the majority of the world's major currencies, but some analysts are warning that the writing's on the wall for the U.S. currency and a long-term period of outperformance might be coming to an end.

October's Insitute for Supply Management (ISM) services PMI came in at 54.7 on Tuesday, up from 52.6 in September and far ahead of the consensus for a reading of 53.5, although the institute said the upswing was aided by statistical 'base effects' because of an even larger decline in the index the previous month.

Current activity and new orders both rose just less than 2% last month while headcount was up more than 3% from the prior month. Prices were down 3.4% from September's levels, which is good for consumers but less so for the Dollar.

"While its manufacturing counterpart saw only a modest improvement, the services ISM posted a larger gain to 54.7 in October (from 52.6 previously). That's still below the 56-60 readings seen throughout 2018 and into the start of this year, but is at least a level usually consistent with modest growth in the economy. It is also more in line with recent GDP readings," says Andrew Grantham, an economist at CIBC Capital Markets. 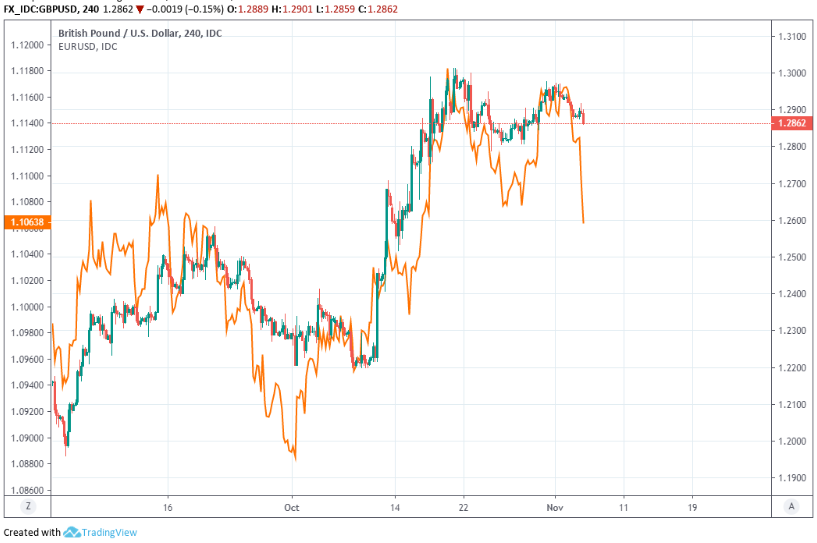 ISM barometers of both manufacturing and services industries tanked in September after President Donald Trump imposed new tariffs on imports from China and lifted the rates charged on the goods further from the original levels announced in August, stoking anger in Beijing and elevated fears for both the U.S. and global economies. However, a ceasefire agreement said by the White House to have been struck on October 11 has since averted further tariffs and quelled the worst of the market's fears about the economic outlook. Although that 'phase one deal' is yet to be written and formally agreed by both parties.

"Under normal conditions we’d expect the index to be in the 58-to-59 range, given the hefty increases in core retail sales in recent months. We doubt the gap will widen, though, given media reports suggesting that the tariffs due to be imposed on the remaining untariffed consumer goods, on December, 15 will not be imposed if the “Phase One” trade deal is finalized. But it’s too much to expect near-term mean reversion in the ISM," says Ian Shepherdson, chief economist at Pantheon Macroeconomics.

Tuesday's ISM survey also came amid reports that President Trump is contemplating rolling back the new tariffs that were announced in September, in addition to cancelling more levies are currently still due to go into effect on December 15. The latter tariffs relate to $160 bn of goods and would see all of China's annual exports to the U.S. become subject to some form of punitive duty if they are allowed to proceed.

The trade war and its effect on the global economy has forced the Federal Reserve (Fed) to begin cutting its interest rate this year, potentially drawing to a close the hiking cycle that saw it lift U.S. borrowing costs nine times in the three years to the end of 2018 including on four occasions last year. The earlier rate hikes, and a 2018 outperformance by the U.S. economy, were key in engineering the Dollar's dominant performance of the last 18 months. 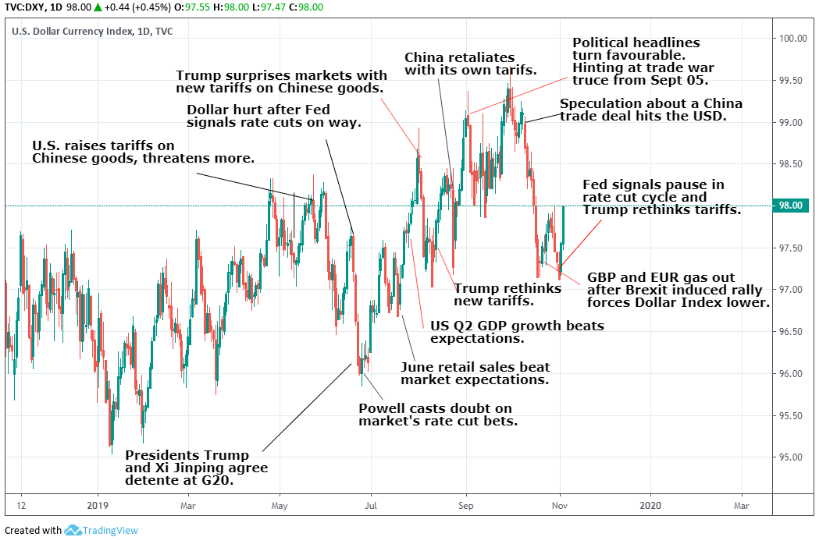 "USD posted a comeback today, especially versus precious metals as China moved to strengthen its currency ahead of a possible US-China trade deal. That same factor likely has gold and silver under sudden pressure, as does the stronger than expected US ISM Non-manufacturing survey for October, which is driving USD strength," says John Hardy, chief FX strategist at Saxo Bank.

Fed Chairman Jerome Powell signalled strongly last week that the bank is done cutting rates for now, which might help spare the Dollar from any serious damage in the short-term but some analysts say the writing is on the wall for the greenback now that progress in being made toward ending the trade war between the U.S. and China.

The tariff fight, along with Fed interest rate policy, has crushed non-Dollar currencies in the last year or more because of its effect on global growth and the monetary policies of other central banks but those foundations, which were still supporting the Dollar on Tuesday, are increasingly at risk of crumbling. Analysts at Commerzbank said Tuesday that a winding down of hostilities between the U.S. and China could also usher in an end of the Dollar uptrend that began early in the second quarter of 2018.

"The possibility of a trade agreement (albeit a small one) between China and the US and receding fears of a global recession principally mean that the USD is less in demand as a safe haven and the factors supporting it should be coming to an end. Paradoxically positive US data thus entails downside potential for the dollar - assuming the market does not suddenly change its mind and assumes the Fed might even hike rates again soon," says Antje Praefcke, an analyst at Commerzbank. "Fed chair Jerome Powell excluded this at the FOMC meeting in late October and if anything expects even lower interest rates."