Amidst much talk of a recession looming in the U.S., actual U.S. corporate earnings are still beating estimates, suggesting the consensus may be too negative, with potentially positive implications for the U.S. Dollar.

The start of the 3rd quarter earnings season on Wall Street has shown results have come out unexpectedly good.

Out of the 11 corporates which announced Q3 earnings on Tuesday only 2 missed expectations, with the other 9 beating estimates. 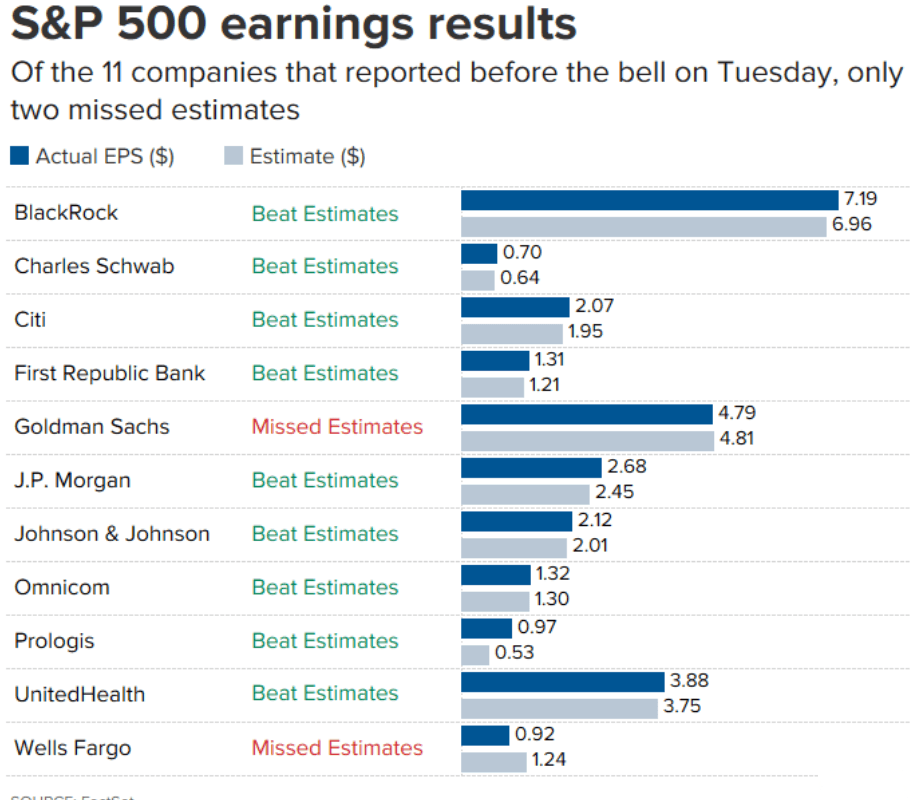 The results are in line with other early earning’s releases so far, which show that of the 34 S&P 500 companies which have reported third-quarter results, 26 reported positive EPS growth, according to Earnings Scout, a stock market information provider.

The early results already suggest an upwards trend to Q3 earnings which is likely to defy expectations that S&P 500 earnings as a whole will fall by circa 4.0% in Q3 after rising 3.0% in Q2.

The data suggests fears that the U.S. economy as a whole is heading for a recession might be premature.

It continues to support the notion that the U.S, consumer remains immune to the slowdown and continues to be a supportive factor for the economy as a whole.

It indicates the slowdown probably remains confined to manufacturing and trade related sectors and the feared contagion into the wider economy, especially the consumer and services sectors has, so far, been limited.

Yet he qualified his comments adding the strong consumer was, “being offset by weakening business sentiment and capital expenditures mostly driven by increasingly complex geopolitical risks, including tensions in global trade.”

Johnson & Johnson, the pharmaceuticals giant, was another company which beat earnings estimates but most of the surprise gains came from its sales of prescription drugs and medical instruments with sales of consumer beauty products, such as Neutrogena, coming out in line with expectations.

Implications for the Dollar

If the positive earnings in the handful of results so far released are reflected more broadly it will mean less pressure on the Federal Reserve (Fed) to pursue interest rate cuts, which will be positive for the U.S. Dollar.

It now seems highly likely the Fed will go ahead and cut interest rates at its October 30 meeting but the longer-term outlook depends on the trajectory of the economy.

If the economy holds up better-than-expected the Fed may pause.

The probability of the Fed cutting interest rates at its October 30 meeting has fallen from 90% before the labour market survey on October 4 to its current 78.6%, according to Fed funds futures.

The survey showed 136k jobs were added to the economy in September and that the economic slowdown was only having a limited impact on the real economy.

The probability then fell to 83% at the end of last week and to 78.6%, probably partly due to easing trade tensions, but also potentially due to better-than-expected earnings results.