- USD slips vs all but JPY on optimism ahead of U.S.-China talks.

- Markets eyes scope for a currency accord and delay of new tariffs.

- But trade war to rumble on regardless, talks may end without deal.

- CBA says rally in AUDUSD, NZDUSD can go further if a deal struck.

- BMO waiting to buy USD, is in naysayer camp of prospects of deal.

The Dollar ceded ground to all major rivals other than the safe-haven Yen Thursday amid fresh speculation in markets that U.S and Chinese negotiators will this week reach a deal that averts a planned October 15 increase in American tariffs on imports from the world's second largest economy.

Bloomberg News has reported that President Donald Trump is seeking an agreement that would oblige China to keep the Renminbi stable, as the price of delaying an increase from 25% to 30% of the tariff levied on $250 bn of goods imported by the U.S. each year. Without a deal those tariffs will rise next week and further levies will then be imposed on December 15, at which point all of China's goods exports to the U.S. will have been clobbered by punitive duties.

"USD is trading on the defensive ahead of today’s US‑China trade talks," says Elias Haddad, strategist at Commonwealth Bank of Australia. "In our view, a material breakthrough in US‑China trade talks is unlikely because of severe structural differences between the two countries."

Haddad is, like many others, doubtful the U.S. and China will be able to solve their differences any time soon although they do say that anything averting a further escalation of the tariff conflict will be taken positively by markets and would likely be particularly beneficial for the AUD/USD and NZD/USD exchange rates. Both of those currencies have been clobbered throughout the 18-month trade war because of large national commodity trades with China. 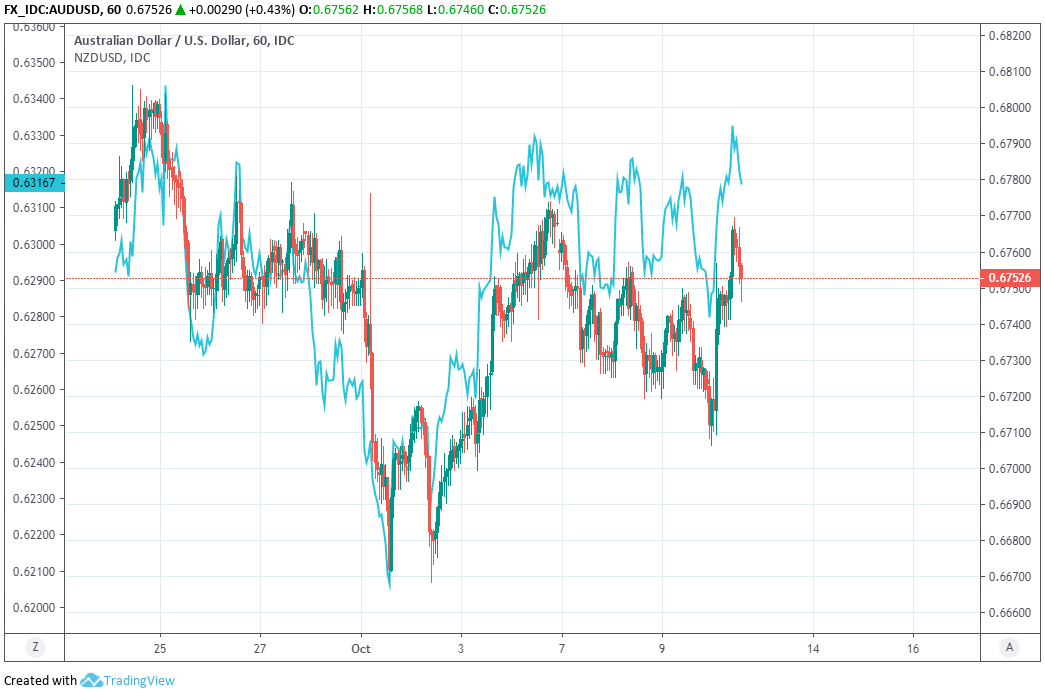 China said earlier this week it's looking to strike a deal that covers only the areas where there is agreement while the White House had insisted on a comprehensive accord addressing all of the "unfair" trading practices said to be used by the world's second largest economy. That President Trump is now open to a narrower accord may have been interpreted by the market as meaning a deal is now more likely to emerge from discussions planned to end on Friday.

"We continue to be in the "naysayer crowd" when it comes to the issue of a comprehensive deal; even if US/China talks don't break down by the end of this week, the problem with many of the issues at stake when it comes to China (including the currency accord) is enforcement," says Stephen Gallo, European head of FX strategy at BMO Capital Markets. "Price action in the USD this week suggests that a US/China stalemate, which is pitched to the media as something more positive than a stalemate, could further weigh on the USD. We're still patiently waiting for better levels to buy USDs on most axes."

Many say China won't tie itself into an agreement that prevents it from devaluing the Renminbi in response to macroeconomic changes or for any other reasons, which might yet prove too much of a curveball for White House negotiators. The talks will be taking place as diplomatic relations sour further over this week's decision by the U.S.to place visa restrictions on Chinese officials and sanctions on companies over alleged rights abuses in Xinjiang province. 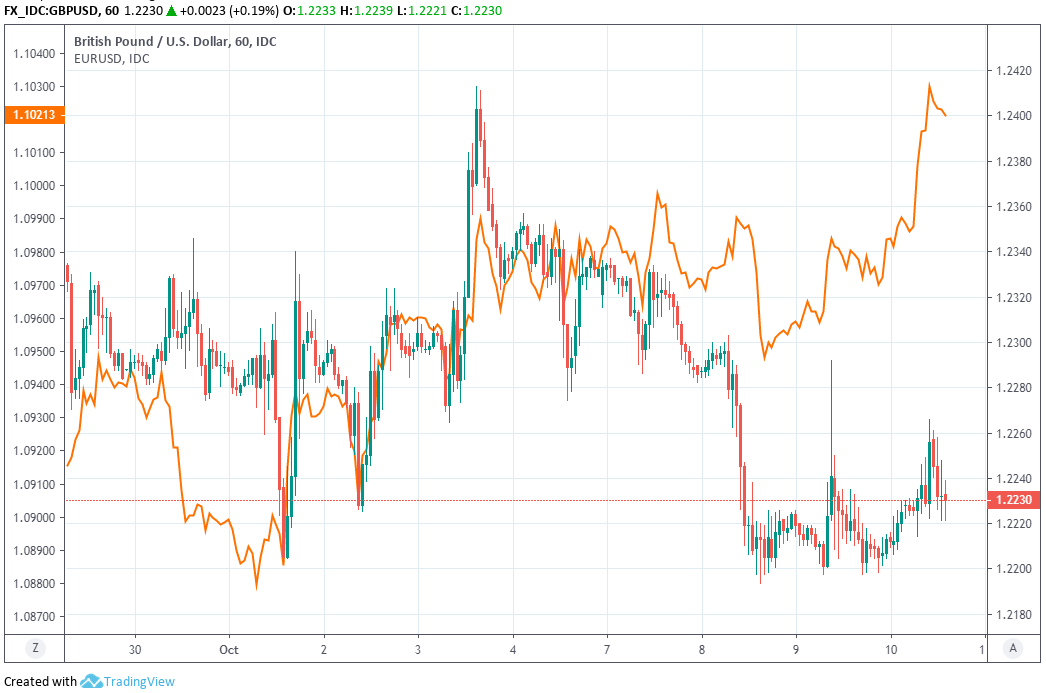 Thursday's talks, set to get underway in Washington, also come hard on the heels of minutes from the September Federal Reserve (Fed) interest rate meeting. The record showed policymakers fretting more about the outlook for economic growth than the prospects of inflation rising above the 2% target., which was interpreted by some in the market to mean that a third interest rate cut could be announced as soon as the October 30 meeting.

"Minutes last night all but confirmed a rate cut at the end of the month, while market participants are also becoming increasingly optimistic over US-China trade talks," says Simon Harvey, an analyst at Monex Europe. "The ECB meeting minutes didn’t add much from what was already given in the press conference, but debates over the restart of QE and purchase limits has pushed bund yields marginally lower and prompted a minor clawback in EURUSD."

Fed Chair Powell came across unconvinced Tuesday that there is any need for further rate cuts in the U.S., despite a duo of Institute of Supply Management (ISM) surveys released last week that showed manufacturing output hitting a decade low and troubles in the factory sector spilling over into the broader economy. But the chairman is only one of 17 votes on the Federal Open Market Committee that makes interest rate decisions.

The Federal Reserve Bank of New York said Friday its 'now-cast' is pointing toward U.S. growth of 2% in the third-quarter, unchanged from the prior period. However, the bank also said last week's Institute of Supply Management surveys have reduced the now-cast for the final quarter by 0.5%, taking it down to 1.3%. Investors are betting increasingly heavily that U.S. policymakers will unveil a series of further rate cuts over the next year. 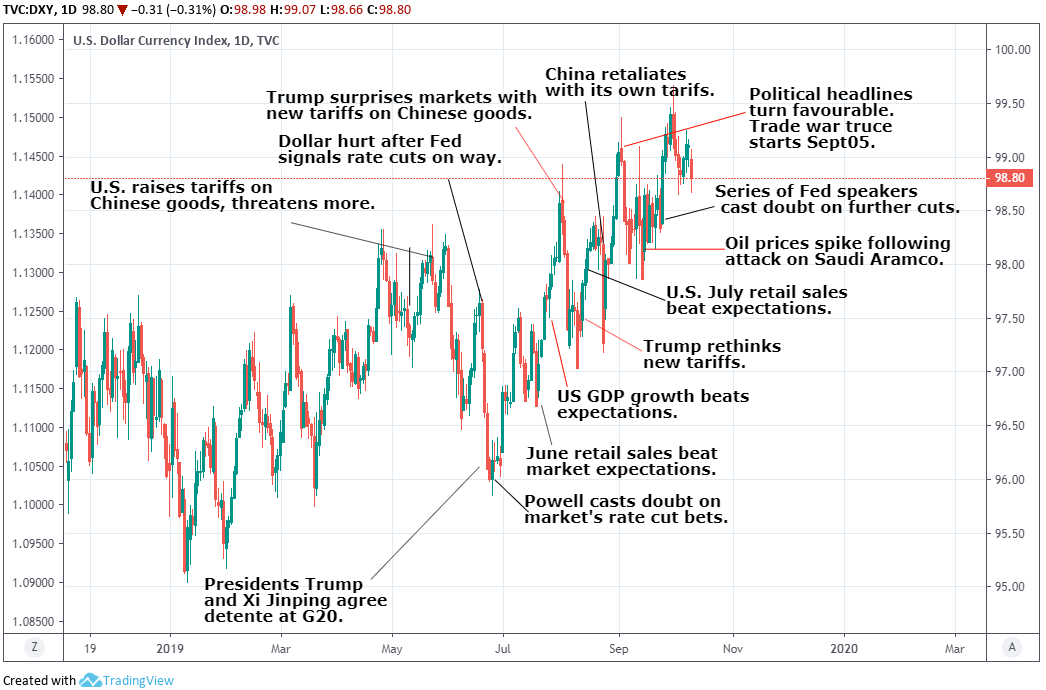