- ECB to cut as uncertainty pervades over if Fed will meet expectations.

- USD weakness prevails short-term, risk of resurgence in weeks ahead.

The Dollar slumped Thursday after a cocktail of supportive political developments drove a recovery of investor risk appetites that some say will continue weighing on the greenback for a while yet, but fresh weakness in Pound Sterling and Euro rates could also stem the decline in the weeks ahead.

U.S. and Chinese negotiators are to go ahead with previously-telegraphed trade talks this month with a view to lining up more substantive discussions for October, Chinese media were said to have reported Thursday, prompting speculation about the prospect of another detente in the trade war between the world's two largest economies. The tariff fight has led to slower growth across the globe, aiding the safe-haven Dollar.

"FX investors short of the GBP have had little choice but to run for cover, given the parliamentary events over the prior 48 hours or so. Even we are moderately reducing our subjective odds of a WTO Brexit on October 31, although we are by no means inclined to chop them below 50% at this stage," says Stephen Gallo, European head of FX strategy at BMO Capital Markets. 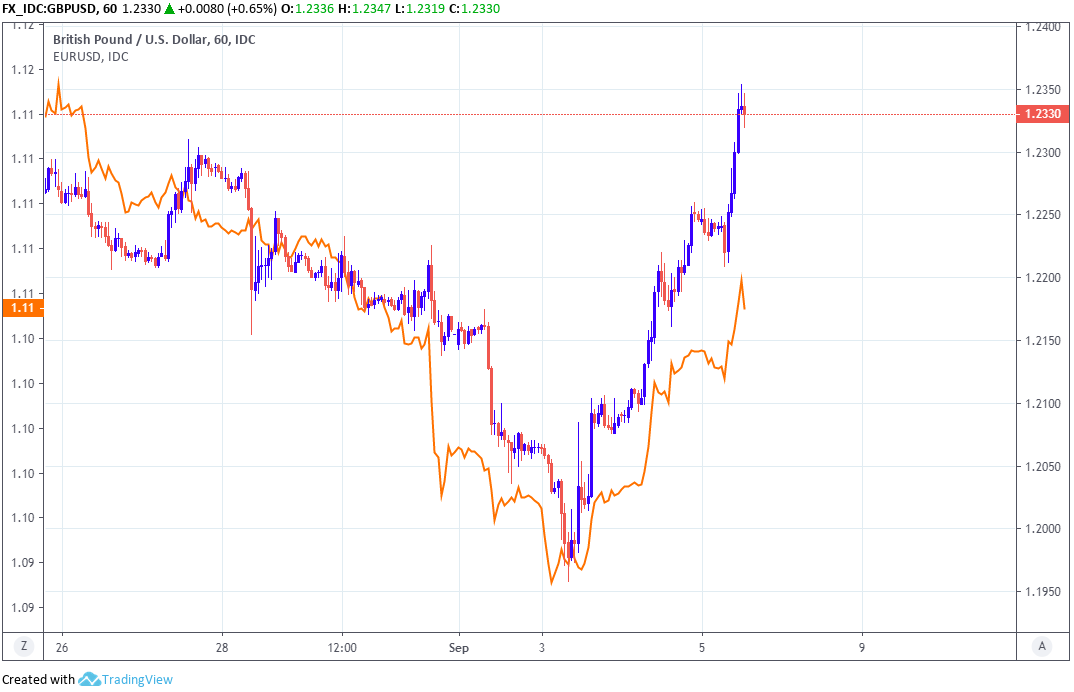 Hopes of a de-escalation came hard on the heels of another defeat by Prime Minister Boris Johnson at the hands of a parliamentary opposition that's been strengthened by rogue MPs originally elected to the governing Conervative Party. The opposition and its allies have voted to force the Prime Minister into requesting another extension of the Article 50 negotiating window, tying his hands in negotiations with the EU and opening a constitutional can of worms.

Pound Sterling has rebounded sharply from earlier losses this week as markets eye a window of opportunity that's now open for MPs to block the UK's path out of the European Union for a third time more than three years after a majority voted to leave in the June 2016 referendum. The bill will not become law unless and until it receives Royal Assent, a process over which the Prime Minister exerts substantial control, although it's fogged the path ahead in UK politics.

"We can see few reasons to be adding to long USD exposures aggressively here, and we can foresee room for an extension of this USD weakness on multiple axes for the time being," Gallo writes, in a research note. "When all is said and done, the combination of "fleeting WTO Brexit risk", the prospects of more Fed dovishness and the US & China "playing nice" is taking the wind out of the sails of the USD...we are inclined to wait for a new opportunity to sell GBPUSD. It's not there yet."

The PM has sought to thrash matters out in another election less than three months after being ascending to high office on a landslide vote of support from party members, but the opposition and now-ousted rebels from within the parliamentary party have blocked his way and insisted he first secure another delay to the UK's departure from the EU. The opposition says it wants to prevent a 'no deal' Brexit on October 31, despite having voted to make it the default outcome if trade talks with the EU fail in the way they so-far have done. 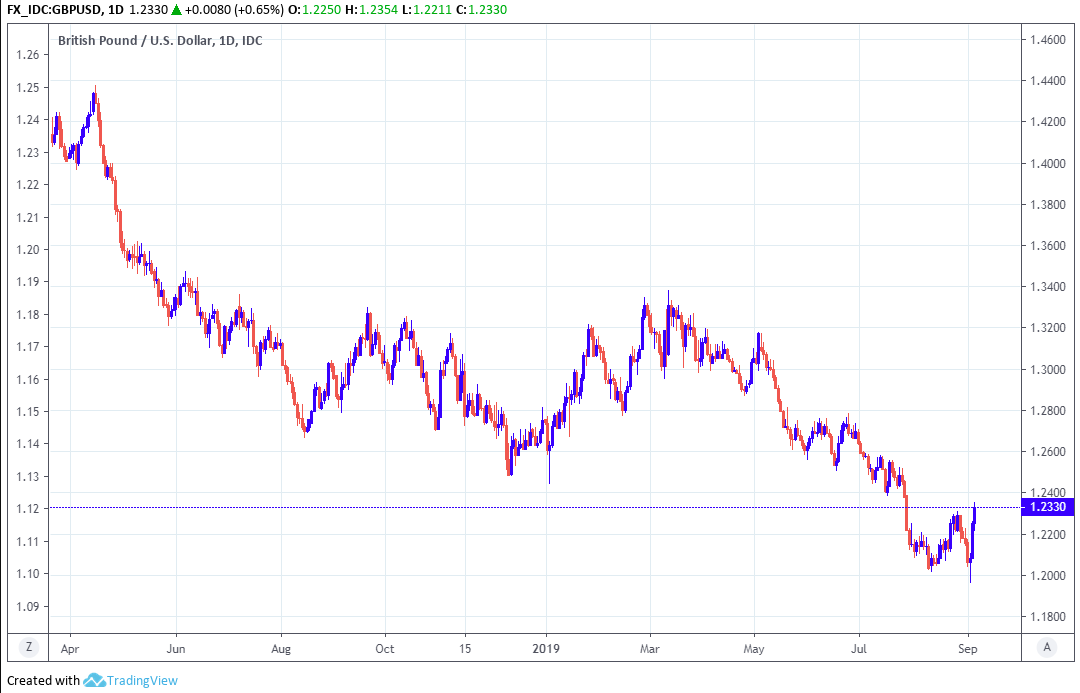 A general election in the UK could ultimately see a divided and frustrated populace choose between a 'no deal' exit and remaining in the European Union, a stark choice that might lead to renewed weakness in the Pound and throw the Dollar a lifeline ahead of the ballot. This new Brexit picture will be painted as markets digest the next moves of the Federal Reserve (Fed) and the European Central Bank (ECB) this month, which will both be instructive for the greenback.

"Unless we see a more meaningful deterioration in the US consumer sector (which has so far shown greater immunity to the trade conflict vs the manufacturing sector), the Fed is unlikely to match the current dovish market pricing," says Petr Krpata, a strategist at ING. "For today, the dollar should remain on the back foot with tentative signs of a resumption of the US-China trade talks helping the risk sentiment and thus weighing on USD as well. EUR/USD is at risk of temporarily breaking 1.1050/1.1100 levels."

Financial markets anticipate five interest rate cuts from the Fed before the end of 2020 with almost three of them expected inside of 2019, although there is significant uncertainty over whether Chairman Jerome Powell and fellow rate setters will actually deliver. Investors are the most downbeat on the U.S. and global growth outlook since the financial crisis, if 'yield curves' in the bond market are anything to go by, and insufficient action by the Fed would simply fuel fears of a deeper global downturn.

A global downturn that takes place with U.S. interest rates still close to post-financial crisis highs would be a recipe for more Dollar strength and although the Fed decision is not until September 18, the greenback could also be loaned some support by the ECB over the coming weeks. It's widely expected to fire a 'bazooka' at the markets on September 12 in an effort to lift inflation by stimulating the economy with lower borrowing costs. 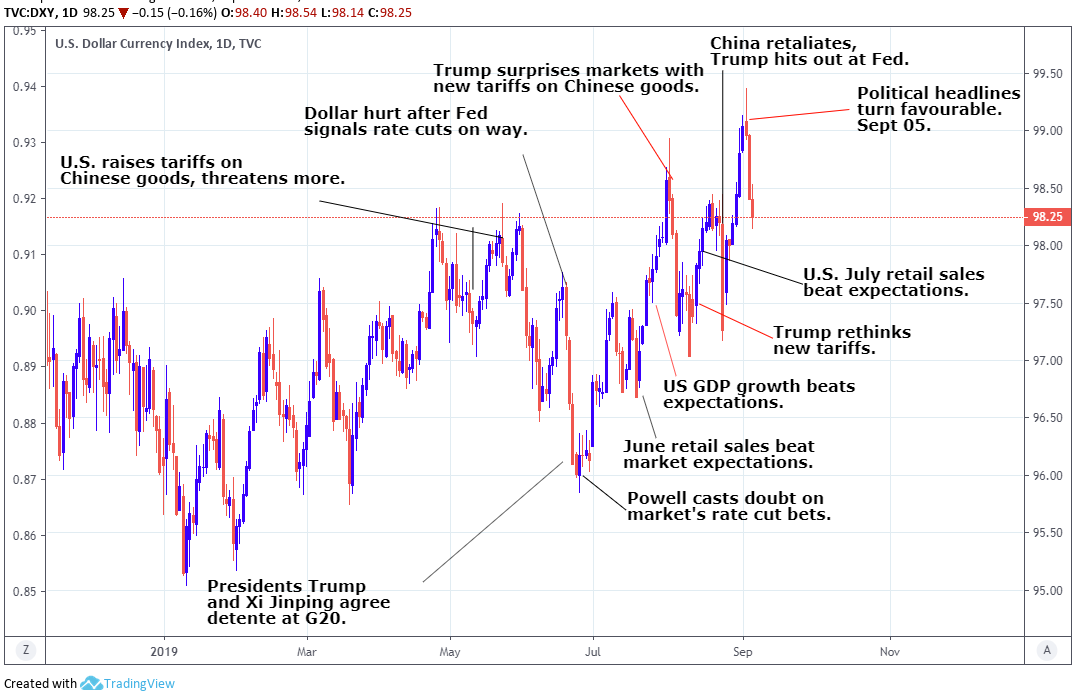 "We see a modest downside risk to ISM Non-manufacturing today. Any downside surprise is likely to be USD negative as it will help to justify current market expectations for Fed easing," Krpata says. "Still, with the EZ economy slowing and the ECB preparing for further easing, EUR/USD upside should be limited. This could be the case even if the ECB doesn’t announce QE next week, as a lack of stimulus is likely to lead to further deterioration of EZ economic outlook, eventually warranting more easing."

Markets expect the bank to cut at least one of its interest rates as a minimum in order to do this, but many also increasingly forecast the ECB will restart the quantitative easing program that it only just wound up back in December 2018. This is after the Eurozone economy was badly wounded by President Donald Trump's trade war with China, especially the German economy. Both are sensitive to developments in China because of their significant exports to the world's second largest economy.

Eurozone core inflation, which is the measurement of price pressures most preferred central bankers, has not been above 1.4% in all of the time since the debt crisis and has recently fallen below the 1% level. The ECB is obliged to ensure inflation averages "close to, but below 2%" over the medium term, which normally refers to a period of around two-to-three years ahead, but this task is being made more difficult to deliver by slowing Eurozone growth that's sapping inflation pressures from the economy. 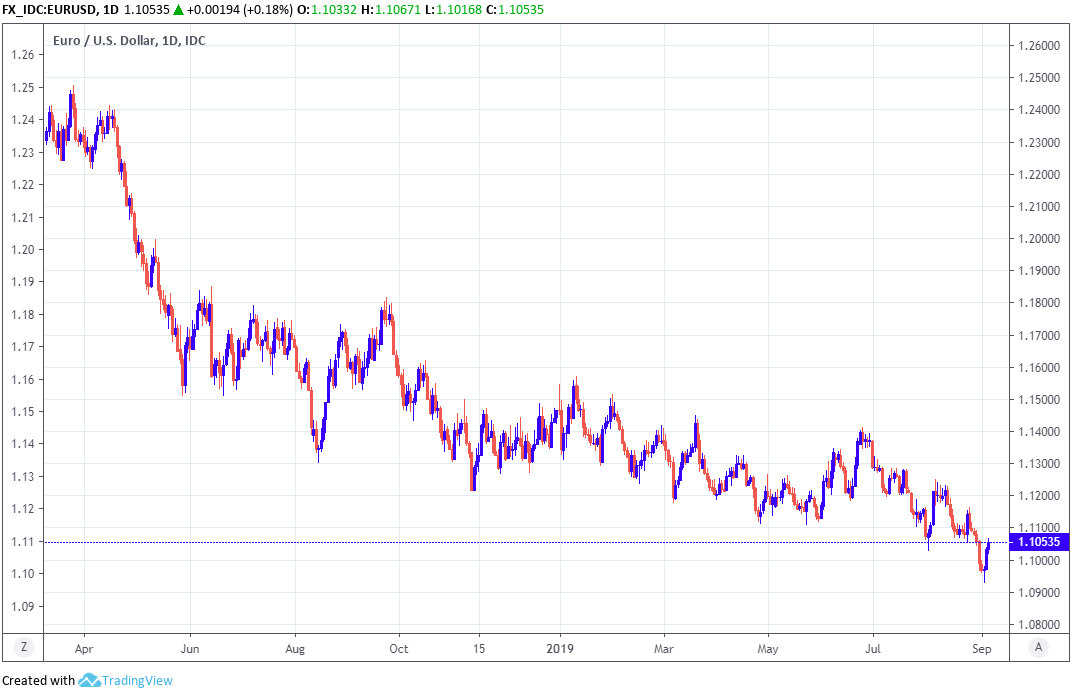