- As Morgan Stanley forecasts 6% loss by year-end for Dollar Index.

- Barclays sees USD weakness into year-end and a 2020 rebound.

The Dollar was on its back foot for a fifth consecutive day Tuesday, ahead of an eagerly anticipated speech by Federal Reserve (Fed) Chairman Jerome Powell, although analysts from several major banks are saying the U.S. currency will cede further ground to its developed world rivals over the coming weeks.

Fed Chair Jerome Powell, who's been the subject of relentless criticism from President Donald Trump because of the four interest rate hikes announced by the Fed last year, will deliver a speech about the economic and interest rate outlook to the Council on Foreign Relations at 18:00 London time.

With the address coming less than a week after the Fed signalled a landmark shift in its interest rate policy, markets will listen closely to Powell for clues as to whether they interpreted the U.S. central bank correctly when it appeared to hint last Wednesday that interest rate cuts are in the pipeline.

"Given the notable shift in the Fed's tune and dot plot, we will be looking for a better understanding of the reaction function which has shifted in favor of acquiescing to market pricing and broad "uncertainty" rather than data dependence. In line with this, there may be clues as to how legit a 50bp cut in July could be," says Mazen Issa, a strategist at TD Securities. "We expect today's speaking circuit to keep focus on USD downside in the coming weeks, with USDJPY on a course correction lower." 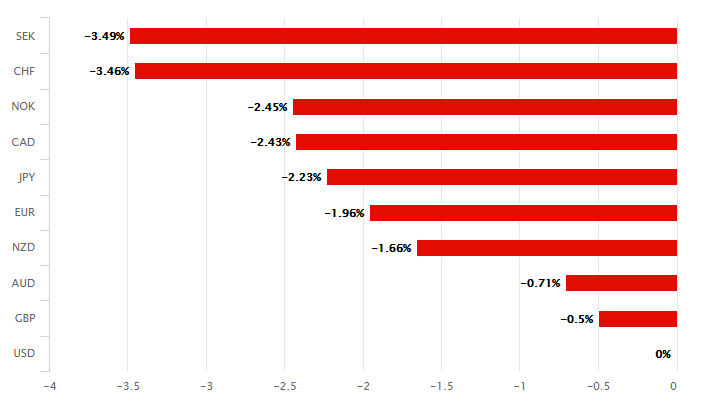 Above: U.S. Dollar performance Vs G10 rivals in June.

Last week's meeting saw Fed rate setters jettison from their dot-plot of forecasts, the last remaining interest rate hike that was pencilled in for 2020. They left the Fed Funds rate range unchanged at 2.25%-to-2.5% but eight of the 17 voters on the Federal-Open-Market-Committee suggested they now anticipate one rate cut before year-end.

Furthermore, Powell told the markets in an accompanying statement that the FOMC would "act as appropriate" to sustain the economic expansion, with a strong jobs market and inflation near its "symmetric 2% objective". The combination of the two led markets to become convinced the Fed will cut rates by 0.5% before year-end.

As a result, the Dollar Index has fallen 1.6% in the last week and many analysts are saying it's still got further to fall during the weeks and months ahead, although the latter assumes the FOMC was not misinterpreted last week.

"We think the USD peaked on June 18 and expect a 5-6% move lower in the DXY through year-end, with our year-end EURUSD call of 1.16 looking conservative. The Fed changed matters last Wednesday by turning more dovish," says Hans Redeker, head of FX strategy at Morgan Stanley. 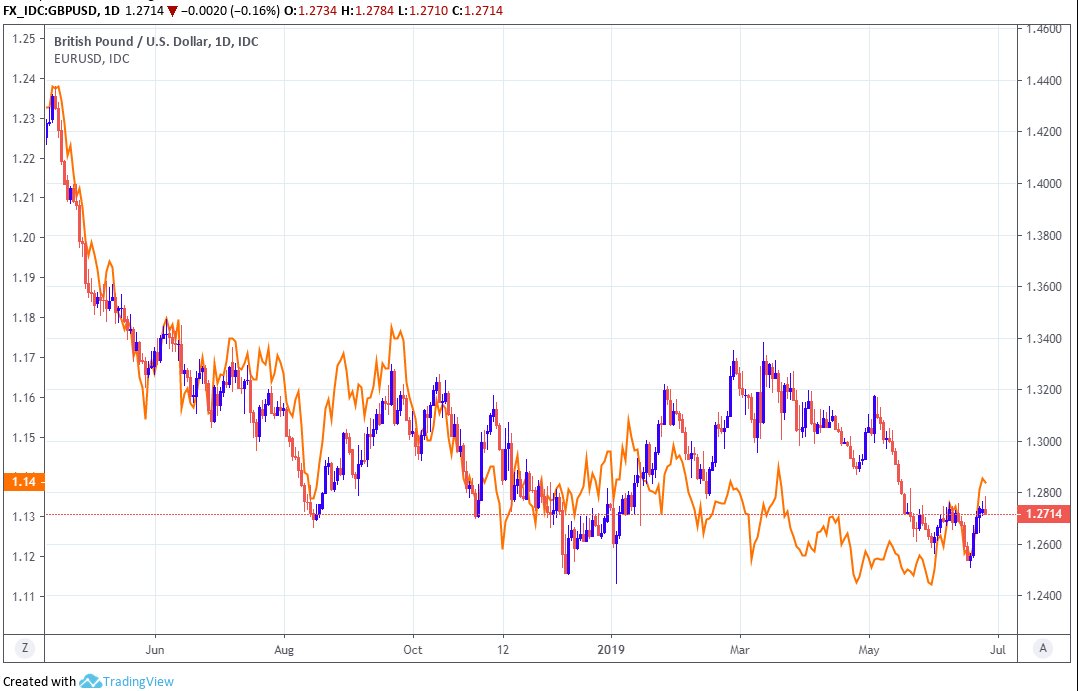 The Fed has lifted its interest rate nine times since the end of 2015 including on four occasions in 2018, while most other developed world central banks have either sat on their hands or cuts interest rates even further. The Bank of Canada, Bank of England and Norway's Norges Bank are the only exceptions.

"The pressure point of growth-negative news has switched from pressuring equity prices lower to lowering US rate expectations. As a result,negative news undermines the USD via rate expectations, while positive news revives the global reflation/growth resynchronisation story, which also weakens the USD," says Morgan Stanley's Redeker. 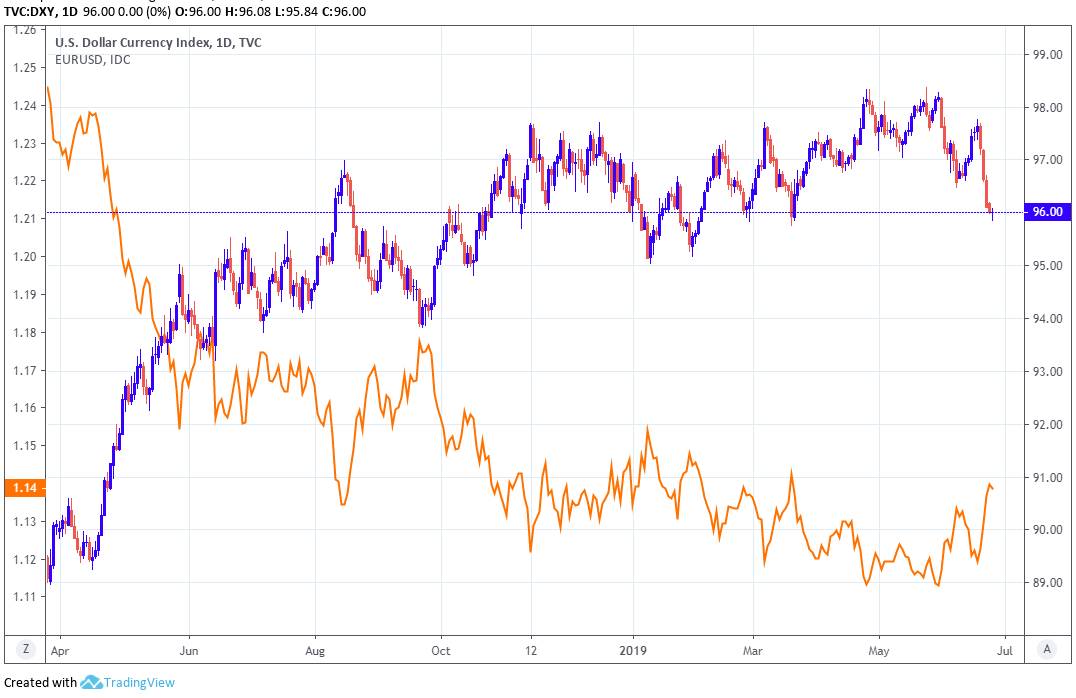 The Fed's rate hiking cycle had helped to lift the Dollar Index by some 4% in 2018, as it pushed the greenback higher against many of its most notable trade partners. But these gains are, for the time being at least, going into reverse. Pressure from President Donald Trump to cut rates may be part of what drove the Fed into its about-turn last week, but the bank had no shortage of other grounds to volt-face on its interest rate policy.

The core personal-consumption-expenditures price index, which is the Fed's preferred measure of U.S. inflation, has been below the 2% inflation target ever since December 2018 and was reported at just 1.6% in April. That's reason enough for the Fed to rethink its interest rate policy but its not the only reason, because the U.S. trade war with China escalated again in May.

"Given our view that US-China trade tensions will likely escalate further post the G20 summit and 25% tariffs will be imposed on most, if not all, Chinese imports to the US, we expect USDCNY to break above 7.0 in 3Q this year. We estimate that the higher tariffs will drag down exports growth by 7-10.5%pts over the next 12 months and our economists have cut their 2020 China GDP growth forecast significantly to 5.5%," says Marvin Barth, head of FX strategy at Barclays. 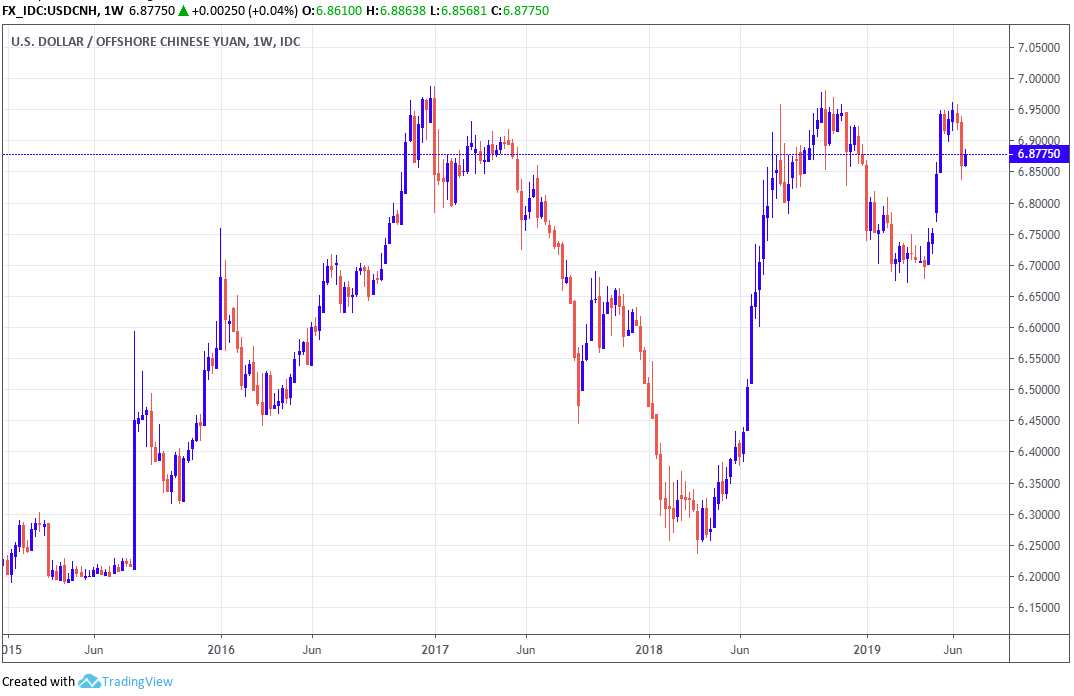 President Trump has been threatening to impose a 25% tariff on the remaining $300bn of China's annual exports to the U.S. if his counterpart does not agree to sign up to a deal that Chinese negotiators previously backed out of. He already lifted from 10% to 25% the tariff charged on $200 bn of China's exports back in May, after Chinese negotiators backed away from an agreement they'd spent some five months drafting with the U.S.

Both U.S. and Chinese leaders will meet at this week's G20 summit in Osaka, Japan, to discuss the latter's "unfair" trade policies but scepticism about the prospects of a lasting detente is high going into the event. But even if a suspension of the next round of tariffs is agreed this week, it won't change the fact that nearly half of China's exports to the U.S. will still be subject to some tariffs and the global economy will remain under pressure.

"We expect the Fed’s pre-emptive cuts to temporarily weigh on the USD, especially vs. G10 currencies, as the US rates advantage compresses amid an environment of slowing global growth. However, the Fed’s ability to support an extended US expansion stands in contrast to clear sustained slowing – and rising risks – in China and Europe, implying a USD rebound in 2020."