- USD builds on gains after retail sales surprise on upside in May.

- USD supported by geopolitics and data one week from Fed decision.

The Dollar was trading buoyantly in a risk averse market Friday after retail sales figures for the month of May surprised on the upside, leading financial markets and analysts to question whether they've become too pessimistic in their outlook for Federal Reserve (Fed) interest rate policy.

U.S. retail sales rose by 0.5% in May, up from 0.3% in April but below the consensus for growth of 0.7%. Core sales, which exclude car purchases because of their distorting impact on underlying trends, also rose 0.5% but this number was in lne with a consensus that had also looked for a 0.5% increase.

Retail sales grew by 3.1% in the year to the end of May, an increase of 0.7% on the previous year. Nonstore retailers, which are those dealing predominantly online, fared the best of all last month, with sales up 11.4% from May 2018.

"The positive surprise on the control group, which feeds more directly into GDP, as well as the upwards April revision, left the three-month average annualized pace of sales at a heady 8.5%, a marked acceleration from only 2.9% in Q1. Consumer spending appears to be accelerating in Q2," says Katherine Judge, an economist at CIBC Capital Markets.

The May month was a solid one for U.S. retailers overall, but improving perceptions of the current health of the economy were also aided by upward revisions to sales estimates from April.

"Big upward revisions to prior data make this a very solid report," says Ian Shepherdson, chief U.S. economist at Pantheon Macroeconomics. "The consumer is back after the weakness in the winter." 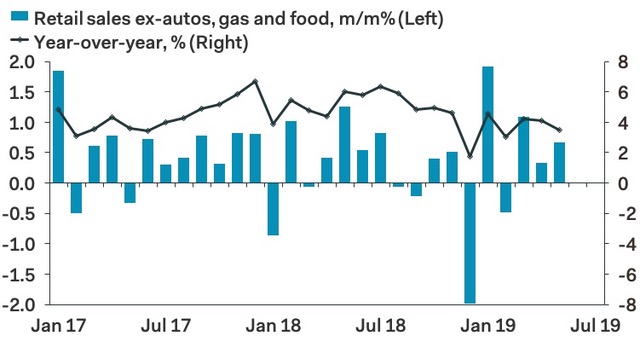 "Decent US retail sales numbers suggest consumers are shrugging off the negative trade headlines and support our view that markets may be too aggressive in their interest rate cut expectations," says James Knightley, chief international economist at ING Group.

Currency markets care about changes in interest rates, as well as the outlook for them, can have a significant influence over international capital flows as well as speculative short-term trading activity.

"These data support our forecast that the Fed won't have to cut interest rates as early as the market is expecting and that has left the USD higher while yields have risen," CIBC's Judge writes, in a note to clients after the release. 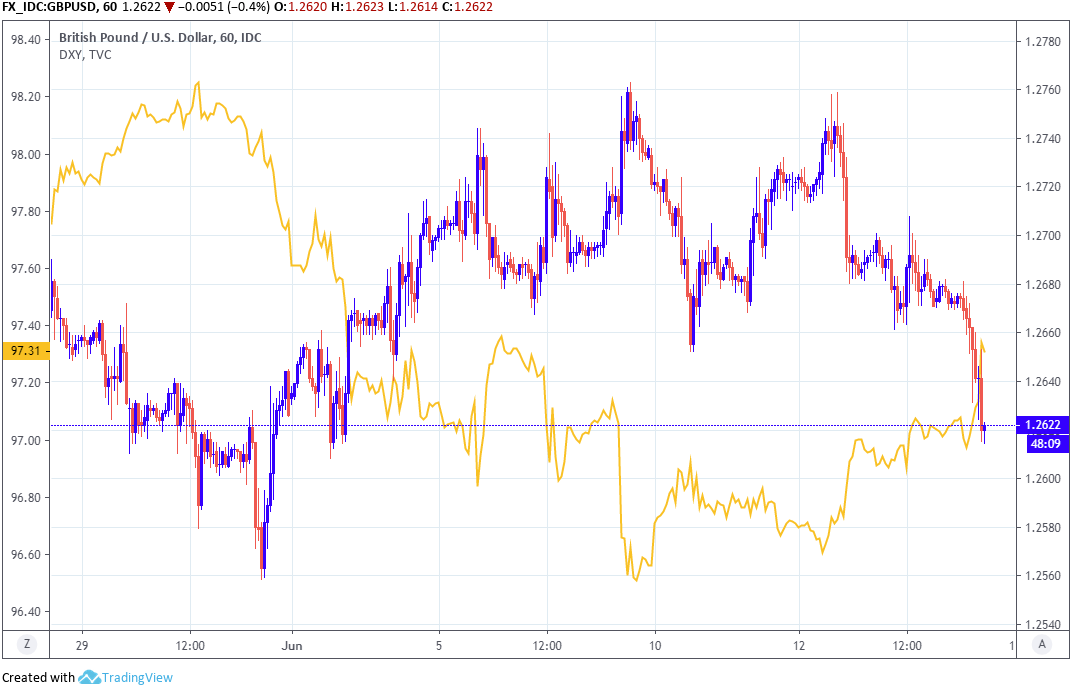 "We see further USD weakness in store. The FOMC meeting next week may reveal greater Fed concern about the underlying strength of the US economy than the market expects," says Geg Teng Khoo at Morgan Stanley. "We suggest fading any potential post-FOMC USD rally. A [Dollar Index] break below lower support at 96.50 suggests further downside momentum."

"The performance of the USD yesterday suggests that a material portion of the “Fed put” and other negative US economic news are now both embedded in the currency already" writes Stephen Gallo, European head of FX strategy at BMO Capital Markets, in a note to clients Thursday. "Even a “neutral” reading on US retail sales would start to look like an opportunity to resume buying USD dips." 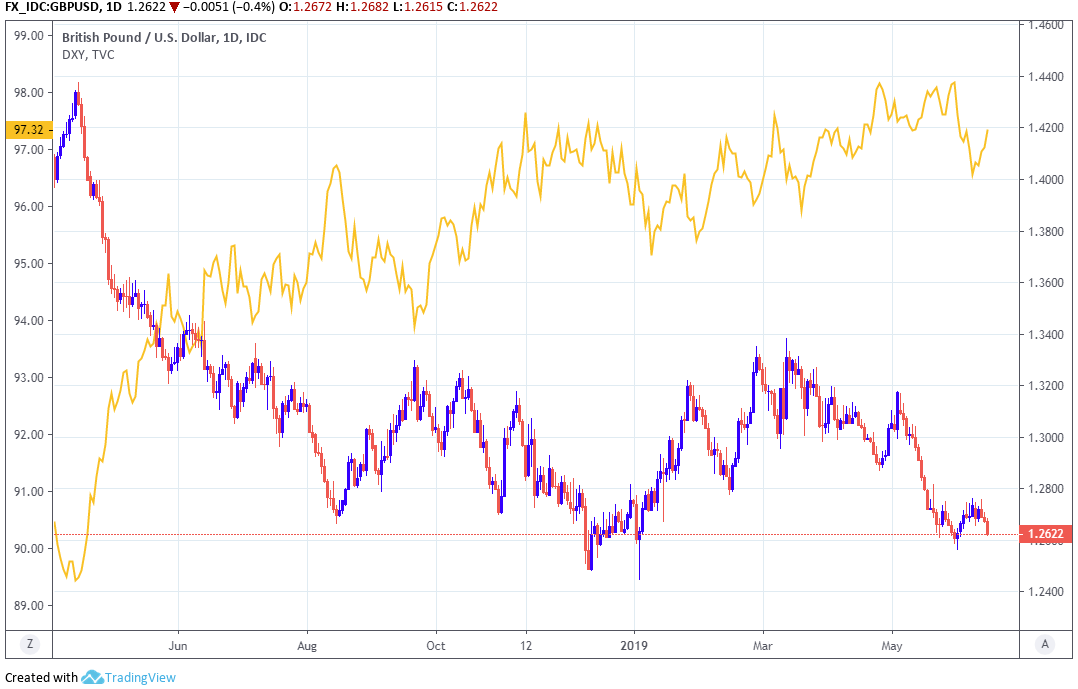 Friday's retail sales figures come less than a week away from the Wednesday 19, June Federal Reserve interest rate decision which will be a pivotal moment for the U.S. central bank, the Dollar and also for the global currency market. The decision is expected at 19:00 Wednesday.

America's greenback has suffered broadly in recent weeks as investors dumped it in response to a solidifying market perception that the economy is slowing which, coming amid an escalation of the U.S.-China trade war, has stoked speculation the Federal Reserve will cut its interest rate before long.

Wednesday's inflation figures were of increased significance against this backdrop because it's consumer price pressures before anything else that dictate the interest rate outlook, as changes in borrowing costs are the primary tool used by the Fed to keep inflation at the 2% target.

The inflation data was weaker than the market anticipated but consumer price growth still remains close to the Federal Reserve target of 2%, which might limit the scope the central bank has available for cutting interest rates.

The Fed raised rates nine times between the end of 2015 and the end of 2018, egged on by a U.S. growth performance that was far better than any seen elsewhere in the developed world, taking the top end of the Fed Funds rate range up to its current 2.5% level. 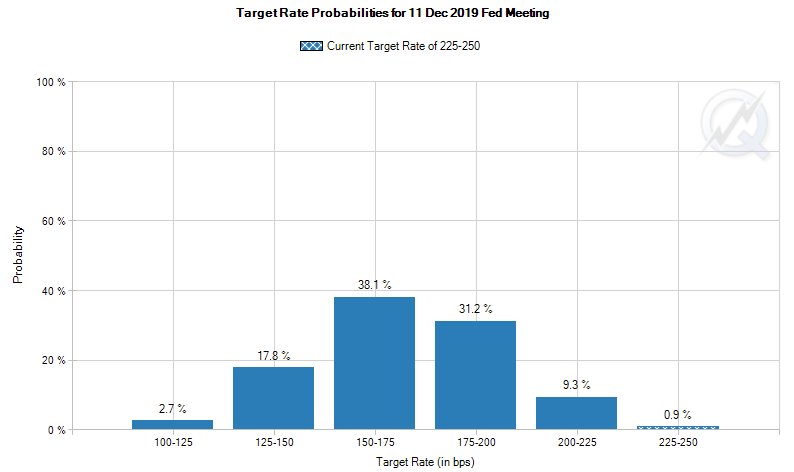 That kind of interest rate policy was what helped the Dollar index climb more than 4% in 2019 as other currencies like the Euro, Pound and Australian Dollars was crushed increasingly disadvantageous bond yield and economic growth diferentials.

Investors had been betting to at least some extent all 2019 that the Fed will cut rates later this year but, in May, the wagering against the U.S. economy increased dramatically.

That increase came alongside an escalation of the U.S.-China trade war and after a series of surveys pointed toward a sharp slowdown in the manufacturing sector, which were taken as signs the U.S. economy is slowing more rapidly than markets anticipated.

Now, financial markets are in the process of determining whether the Fed is likely to cut rates twice or on three occasions this year and next Wednesday's Federal-Open-Market-Committee meeting expected will be instrumental in moving that process along.

If the Federal Reserve says or does anything to suggest markets are right in betting on multiple rate cuts the greenback could suffer while the Pound-to-Dollar and the Euro-to-Dollar rates rise notably.