The Dollar extended earlier gains during noon trading Wednesday even after official inflation figures surprised on the downside for the month of May, although the miss was miniscule and might itself have disappointed those betting the Federal Reserve (Fed) will cut U.S. interest rates this year.

U.S. inflation rose by 0.1% in May, down from 0.3% in April but in line with the market consensus, Bureau of Labor Statistics data shows. However, the on-consensus reading to prevent the annual rate from falling last month, as the 12-month consumer price index fell from 2% to 1.8%.

Core inflation, which is seen as a truer measure of domestically generated inflation pressures because it excludes changes in commoditised food and energy prices, surprised on the downside in May.

The core inflation rate rose by only 0.1% last month, which knocked the annual rate down to 2%, when markets had looked for a 0.2% gain to keep the 12-month core price index steady at 2.1%.

"Core price pressures were softer than expected for the fourth month in a row in May," says Katherine Judge, an economist at CIBC Capital Markets. "Today's data do not necessarily confirm that core PCE inflation will move further away from the Fed's target." 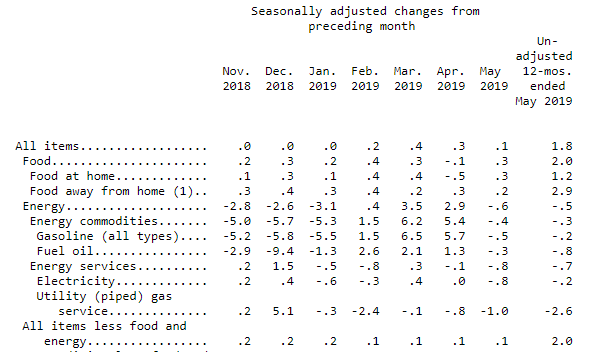 Above: Bureau of Labour Statistics table of U.S. inflation rates.

The personal consumption expenditures (PCE) price index, which is the Fed's preferred measure of inflation,  reached a 2019 high back in April when the index came in at 1.5% and 1.6% after food and energy items are excluded.

Both PCE numbers are below the Federal Reserve inflation target of 2%, although it's the consumer price index readings released on Wednesday that are the official U.S. measures of inflation and those are both clearly close to, if-not exactly on, the central bank's target.

"Today’s inflation report keeps the Fed’s options open. With the US economy showing few signs of inflationary pressure (at least from a consumer price standpoint), the central bank has leeway to respond to any slowdown in growth caused by tariffs and trade policy uncertainty. We don’t think the data makes enough of a case for rate cuts at this stage," says Josh Nye, an economist at RBC Capital Markets. 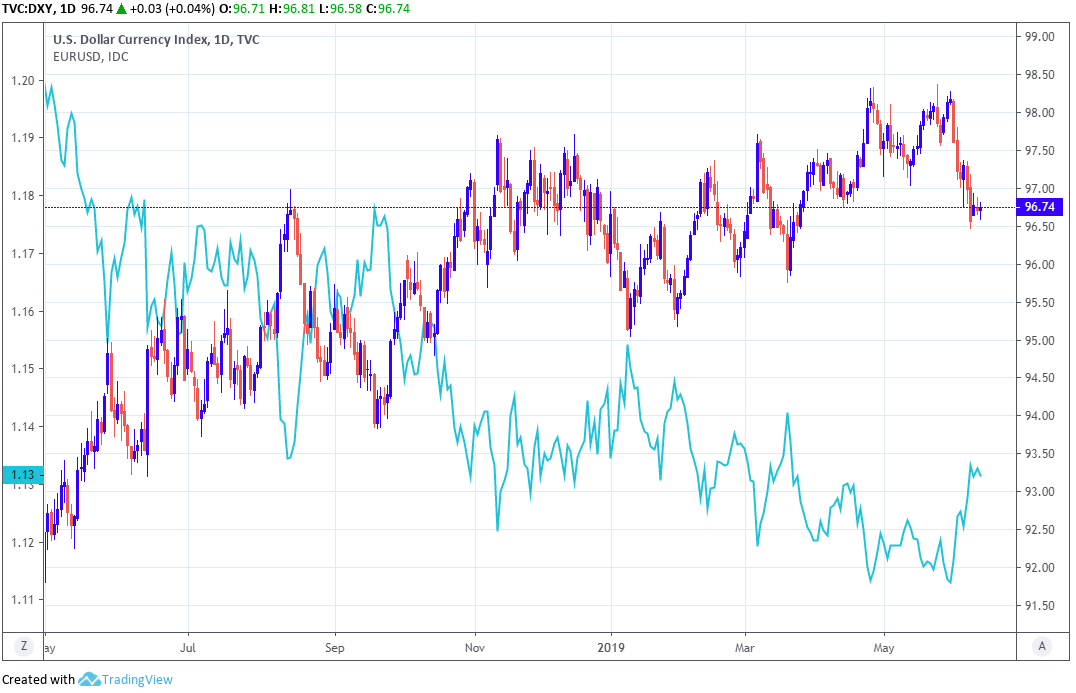 "Further US dollar weakness especially against low yielding currencies including the euro, Swiss franc and yen would be likely if the dollar index breaks below the 96.500-level," says Lee Hardman, a currency analyst at MUFG. 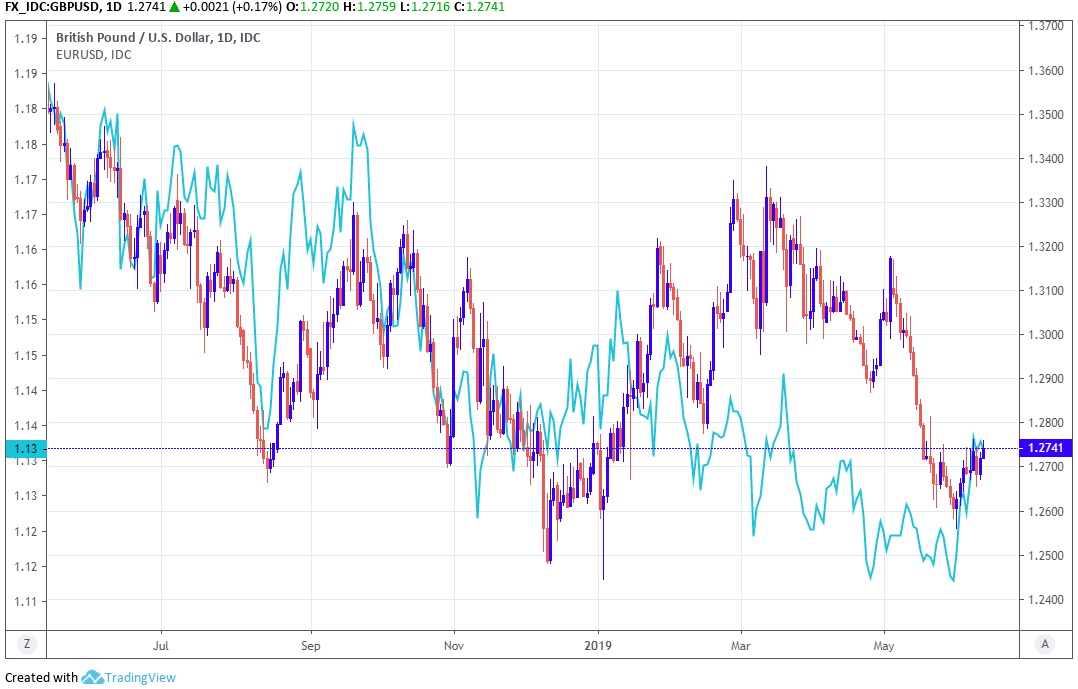 "We are beginning to see cracks in the industrial sector and business investment. Greater evidence of trade headwinds impacting the broader economy would help build the case for a move," says RBC's Nye. "Further escalation of the US-China trade dispute would increase the likelihood of a pre-emptive move from the Fed."

America's greenback has suffered broadly of late as investors dumped it in response to increasing signs the economy is slowing which, coming amid an escalation of the U.S.-China trade war, have stoked speculation the Federal Reserve will cut interest rates before long.

Wednesday's inflation figures were of increased significance against this backdrop because it's consumer price pressures before anything else that dictate the interest rate outlook, as changes in borrowing costs are the primary tool used by the Fed to keep inflation at the 2% target.

"For now, inflation pressures in aggregate remain benign. As such, financial markets will see little reason for the Federal Reserve to hold back from rate cuts in coming months to combat the perceived threat of a slowdown caused by intensifying trade tensions," says James Knightley, chief international economist at ING. "Given the recent language shift from Fed officials, we believe that they will use next week’s June FOMC to signal an easing bias." 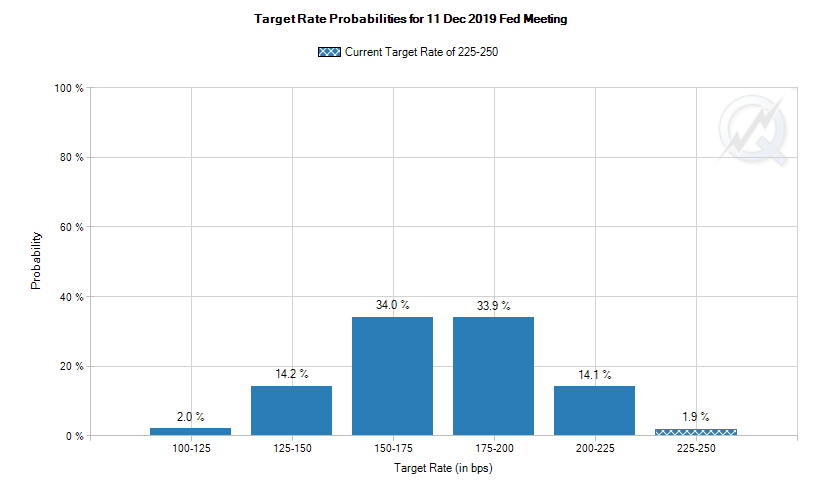 Markets care about the inflation and Fed story because changes in interest rates, as well as the outlook for them, can have a significant influence over international capital flows as well as speculative short-term trading activity.

The Federal Reserve raised interest rates nine times between the end of 2015 and the end of 2018, taking the top end of the Fed Funds rate range up to its current 2.5% level. However, pricing in the overnight-index-swap market now implies as many as three rate cuts could be likely before the end of 2019.

"While we doubt that the Fed will carry through with the 100 basis points or so of policy easing currently priced by markets, the longer trade tensions drag on, the greater the chance the Fed will be forced to respond aggressively," says ING's Knightley, in a note to clients after the release.