- But rally soon to run out of steam, sellers to reassert themselves.

The Pound has advanced against a retreating Dollar this week and could have further to climb over the coming days according to technical analysts at Commerzbank, who've also cautioned clients that the ongoing upward correction might not last for very long.

Sterling was aided in its upward climb Friday by the result of the Peterborough byelection, which saw the opposition Labour Party fend off the 'no deal' Brexit-backing Brexit Party when the latter had been tipped by pollsters to win with a comfortable majority.

But much of the Pound's improved fortune this week owes itself to a decline in the value of the U.S. Dollar, which has been sold heavily as financial markets continue to speculate the Federal Reserve will cut its interest rate multiple times before the year is out.

It's that speculation, and potentially relief among some in the market over the outcome of the British byelection, that gives investors a fundamental basis for why the Pound-to-Dollar rate will go further over the coming days.

But Germany's Commerzbank has other reasons for thinking the exchange rate will go on rising. 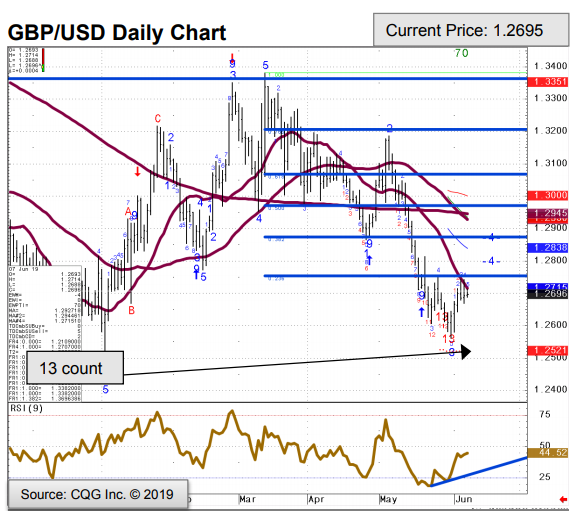 "GBP/USD remains upside corrective very near term and has reached the 23.6% retracement at 1.2753, where it is consolidating. It will need to regain this on a closing basis as an absolute minimum in order to alleviate immediate downside pressure," says Karen Jones, head of technical analysis. "We are looking for the correction to extend to the 38.2% retracement at 1.2873, where we suspect it will stall."

Jones uses studies of things like trends and momentum on the charts in order to predict future price moves. She is betting on a continued rise in the Pound-to-Dollar rate after having succesfully picked the bottom of the second-quarter downtrend back in May when buying Sterling at 1.2630.

She's planning on reducing her bet when the market reaches 1.2750 and exiting it entirely at the 1.2875 level.

"Immediate downside pressure will be maintained while no rise above the 200 day moving average at 1.2945 is seen. Next up is the May 10 high at 1.3048. Only if this level were to be exceeded, would we look for the 1.3185/97 April and current May highs to be retested," Jones writes, in a briefing to clients.

The Pound-to-Dollar rate was up 0.18% at 1.2715 Friday but is now down 0.2% for 2019, after having fallen steeply during the recent month. Sterling 2.7% in the last month and is down by a similar but slightly larger amount over a three-month horizon following what has been volatile trading. 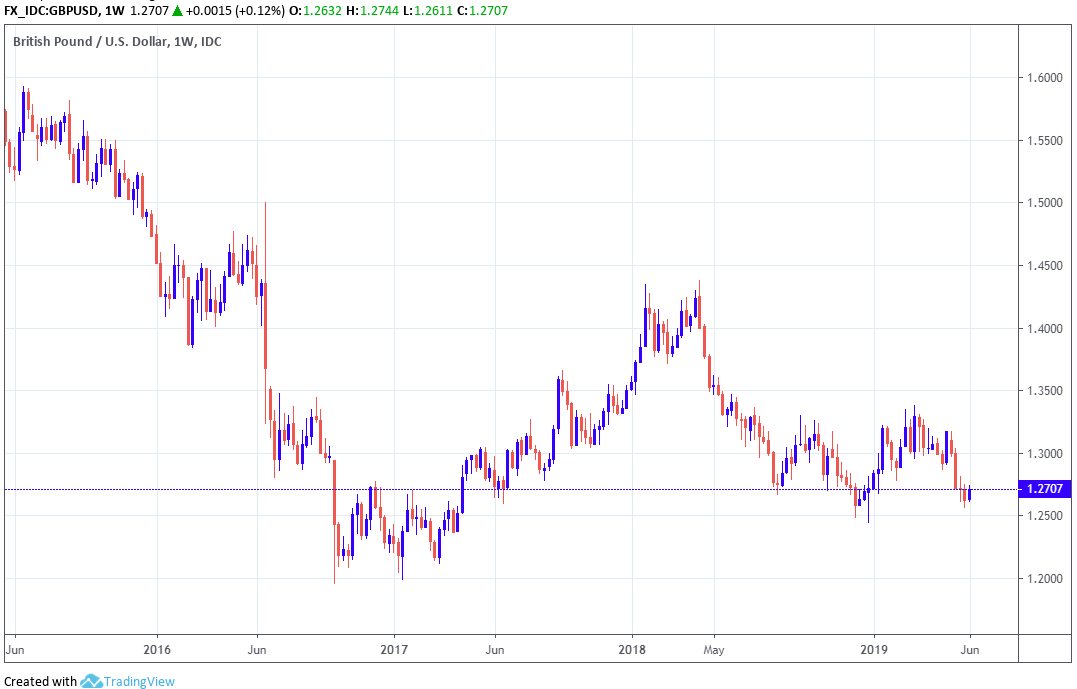 Looking ahead, analysts will take many of their cues on Sterling from developments in the Conservative Party leadership contest, which was triggered last month when Prime Minister Theresa May said she intended to step down.

PM May failed on three occasions to get her contentious EU withdrawal agreement approved by parliament due to rebellions from both sides of the remain-Brexit divide within her own party as well as an opposition that's so-far been determined to do anything that might force a general election.

As a result the Article 50 negotiating window has been extended on two occasions and popular support for the governing Conservative and opposition Labour parties is waning severely, with a two-party system now at risk of turning into a four party system.

This has got some leadership candidates pitching the idea of engineering a 'no deal' Brexit and some Conservative MPs threatening to support an opposition vote of no confidence in the government under such a scenario, creating multiple risks to the Pound.

"It’s perhaps a little harsh to say pro no-deal Brexiters suffered a blow – the Labour Party won by a mere 683 votes over the Brexit Party. We see little upside for the pound at present and maintain a ‘sell on rallies’ stance," says Lee Hardman, a currency analyst at MUFG. " Our US Rates analyst in New York, John Herrmann, is predicting a 170k gain in payrolls today, which is only a touch below the Bloomberg consensus of 175k...the 170k gain MUFG expects would be likely seen as somewhat of an upside surprise."

Friday's price action in the Pound-to-Dollar rate comes aheah of the May nonfarm payrolls report, which will be important for all Dollar exchange rates. Hardman suggests the Dollar could rise as a result of it, which would be negative for the Pound-Dolla rate.

He says another employment report released Wednesday could have seen the market reduce its expectation of Friday's number so the consensus figure published by third party providers, and referenced above, may be out of date and too high. The data is out at 13:30 London time.