- But numbers are "so wild" they're destined for revision says economist.

The U.S. Dollar weakened Thursday after official data revealed a steep slump in retail spending during December that shocked financial markets the world over, although some analysts say a creaking global economy means there is only limited scope for the greenback to depreciate this year.

Retail sales fell by a show-stopping -1.2% in December, more than reversing a downwardly-revised 0.1% reading from November, when economists had looked fro a 0.1% gain for the final month of the year.

Core retail sales, which exclude automotive items from the data because of the distorting effect they have on underlying trends, fell by an even larger -1.8% while the 0.2% gain seen back in November was revised away leaving growth for the Black Friday month sat at 0%.

"The unexpected plunge in control group retail sales in December means that fourth-quarter GDP growth was probably nearer 2.5% annualised than the 3.1% we had pencilled in and, more worryingly, it also suggests the economy entered 2019 with less momentum than anticipated," says Michael Pearce, an economist at Capital Economics. 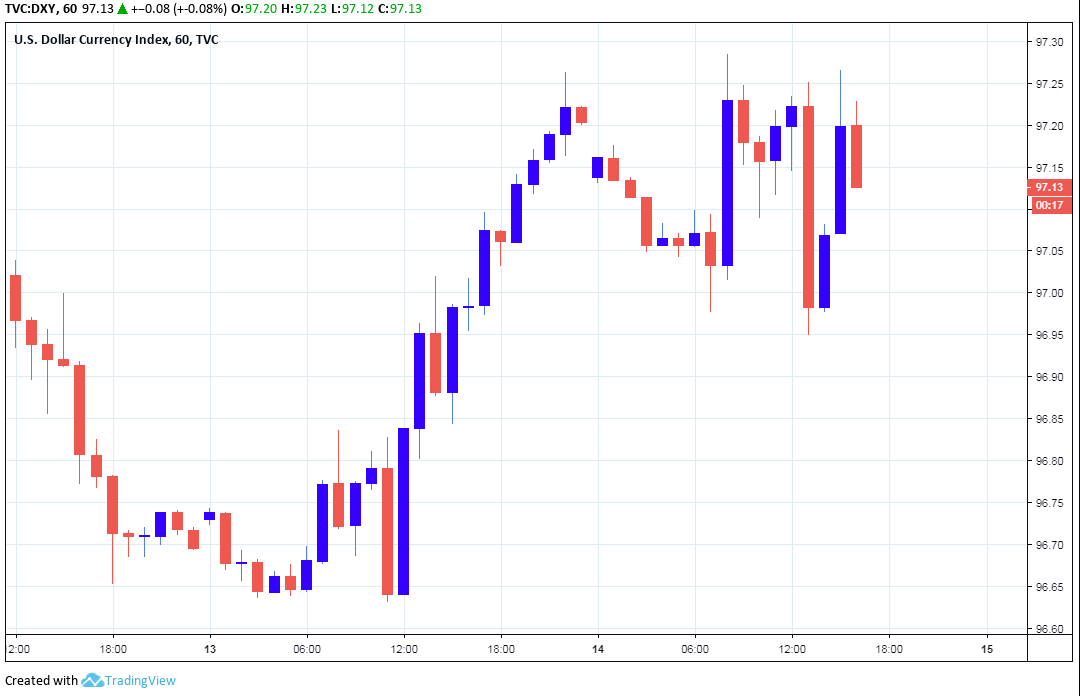 The Dollar had crushed all its rivals back in December when the Census Bureau published its figures for the previous month but now, two months forward and on the other side of the longest government shutdown in U.S. history, those numbers have been more than revised away.

And there's still no consensus explanation for the reversal as most of the obvious culprits have at least half an alibi for that particular month. Pearce says it wasn't the -5.1% fall in gasoline sales brought about by lower oil prices because the "control group sales" fell by -1.7% in December.

Thursday's data can't be entirely blamed on the U.S. government shutdown that got underway ahead of the New Year because much of it came after December, albeit that consumers and federal workers in particular had been warned by incessant news coverage that it was on the way.

Furthermore, and although November's Black Friday means the December month has tended to produce a fall in retail sales for some years now, about the one thing economists appear to be finding conensus on is the idea there's more to Thursday's data than a post-Black Friday correction. 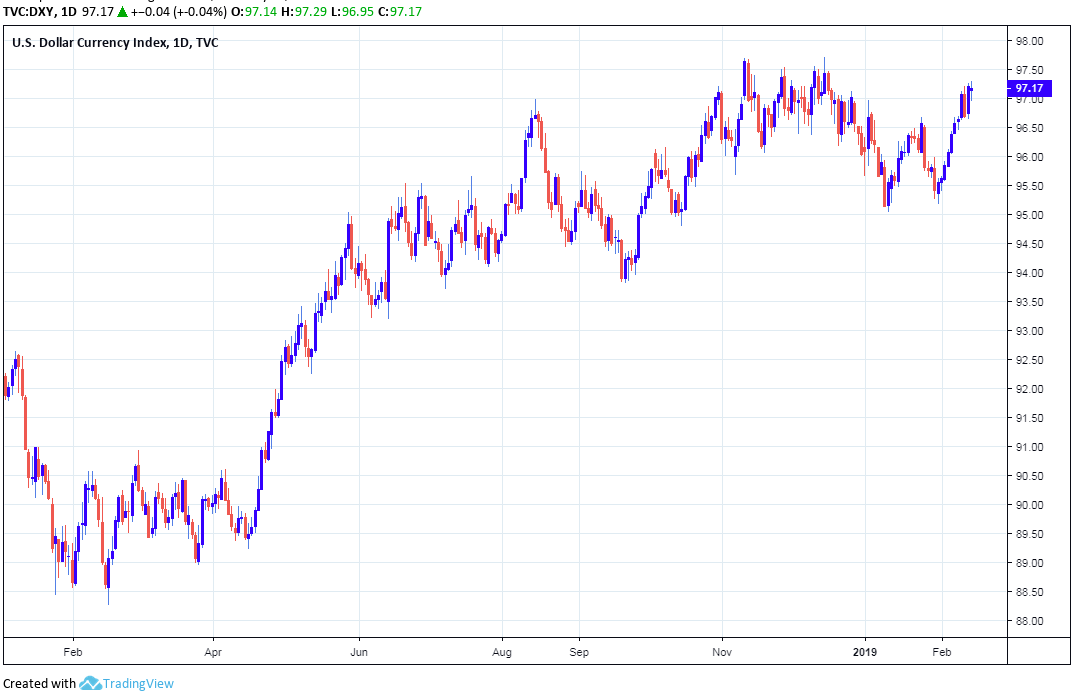 The Dollar index was quoted -0.04% lower at 97.16 during the noon session, with most of the greenback's losses coming against safe-haven currencies like the Japanese Yen and Swiss Franc, although the Euro also scored a minor gain. And U.S. bond yields fell sharply in a classic sign of a "flight to safety". 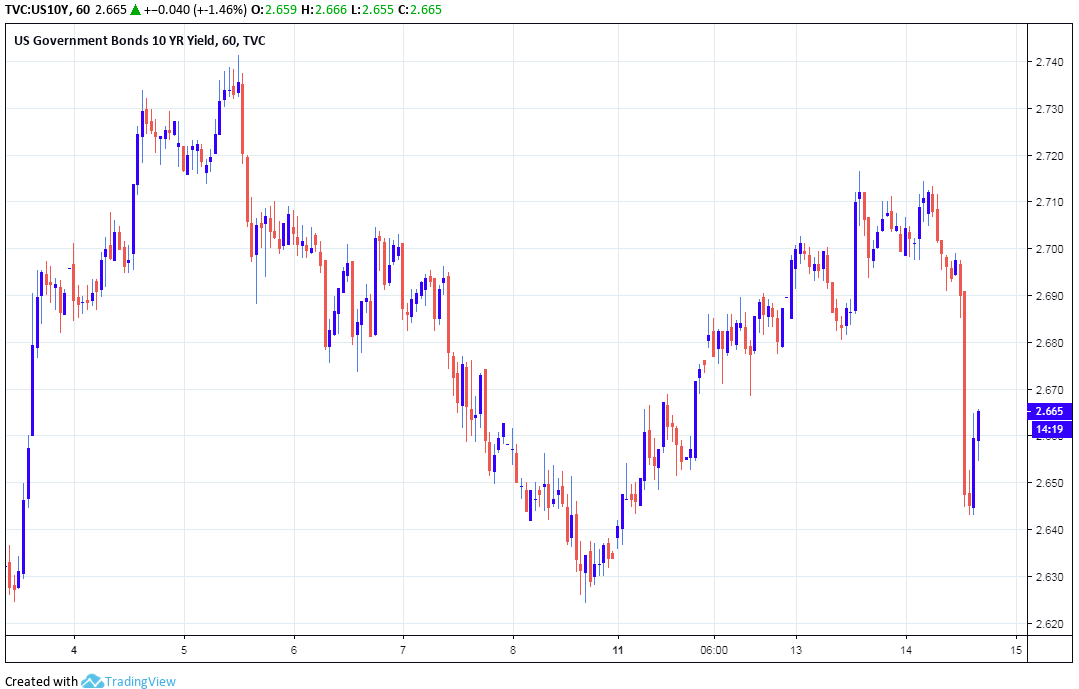 "These numbers are astonishing, and impossible to square with the Redbook chainstore sales survey, which reported surging sales in December and a record high in the week of Christmas, on the back of the plunge in gasoline prices," says Ian Shepherdson, chief U.S. economist at Pantheon Macroeconomics.

Shepherdson notes that Johnson Redbook Index measurements of same-store sales on a year-over-year basis showed U.S. retailers having a party at Christmas and that data is normally highly reliable, which is part of the reason Thursday's numbers have come as such a shock.

"These data are so wild that we have to expect hefty upward revisions, but if they stand, they are very unlikely to be representative of the trend over the next few months. The consumer is no longer enjoying tax cuts or falling gas prices, but that’s no reason to expect a rollover," Shepherdson adds. 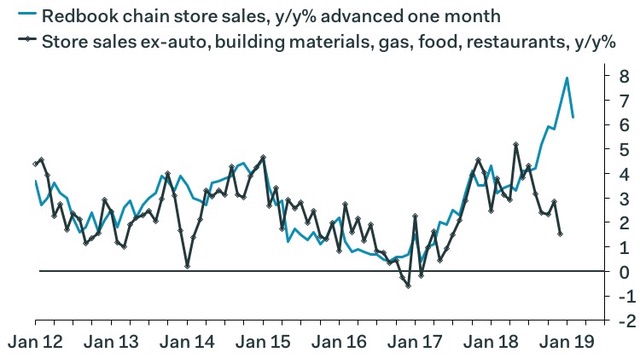 Thursday's data matters for the greenback because of what it might mean for growth of the U.S. economy this year, which is important in light of the January monetary policy shift by the Federal Reserve (Fed).

"Despite the Fed halting rate rises, and the rates market partially-pricing in potential future Fed rate cuts, we don't believe the USD will weaken much in H1 2019. That is because we can't see what the USD will weaken against," says Richard Grace, head of FX strategy at Commonwealth Bank of Australia (CBA).

The Fed's shift came amid a clear and protracted slowing of the Chinese and Eurozone economies, which is thought to have been brought about in large part by President Donald Trump's trade war with China.

And it's that shift that analysts have cited for an increasing number of bearish forecasts for the U.S. Dollar this year, although Australia's CBA is not buying the Dollar-decline narrative given the condition of other economies elsewhere.

China's economic problems under White House tariffs are well known but the Eurozone economy has also come off the boil and markets have been pessimistic about the Antipodean economies for a while now. 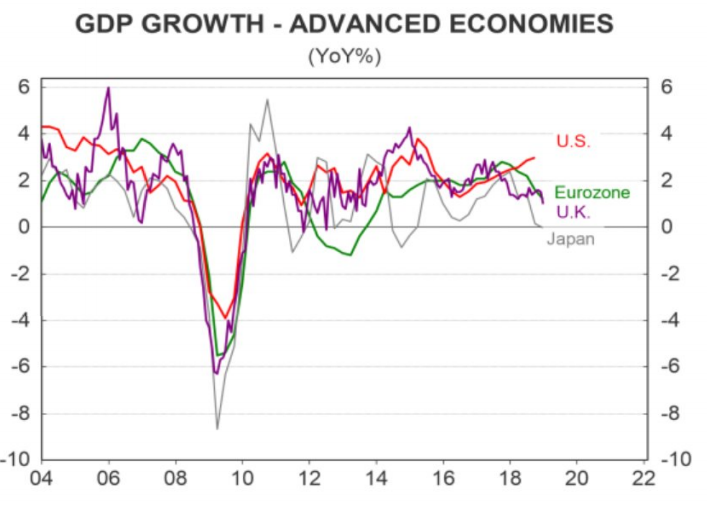 "Neither the Eurozone, UK, Chinese or Japanese economies are obvious recipients of currency strength at this point in the economic cycle," says CBA's Grace, who forecasts the Canadian Dollar will be the only G10 cuyrrency to actually rise against the greenback in the first half of 2019.

However, for the year overall, the Euro and Swiss Franc as well as Australian, Canadian and New Zealand Dollars are all projected to eke out some kind of gain over the U.S. currency. But that shift is contingent upon the Federal Reserve sitting on its hands as growth elsewhere in the world picks up.

The Federal Reserve raised its interest rate four times in 2018 and on nine occassions since the final quarter of 2015, leaving the Federal Funds rate range sat between 2.25% and 2.75% since December 2018.

Those hikes came at a time when most other central banks were sitting on their hands with their monetary policies still calibrated to crisis-era settings, which is why the U.S. Dollar was able to rise by nearly 5% last year after having wracked up a -4% loss in the first quarter.