The GBP/NZD exchange rate has broken below a key technical level, which could open the door to fresh declines we are told.

We have witnessed the Pound-to-New Zealand Dollar exchange rate dip below the 200 day moving average which many had expected to be a line below which Sterling would not cross owing to expectations for heavy buying interest to be layered here: 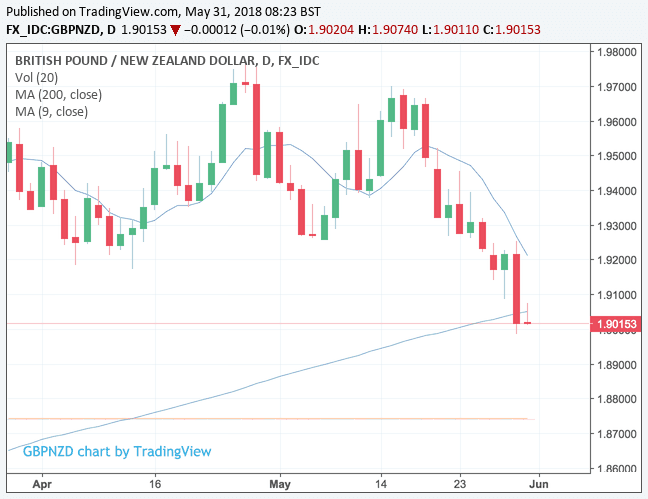 Above: The 200 day moving average is the rising blue line, falling below here signals the potential for further losses.

"After being sidelined for the past few days this cross came roaring to life, and has broken above its 200-day moving average to set the scene for a new, higher range," says a note from analysts at ANZ Research, referencing the NZD/GBP which is the inverse of the above chart.

ANZ reckon resistance in GBP/NZD is at 1.9050 and the next support level where buying interest might stabilise the market is at 1.88.

The New Zealand Dollar has been middle-of-the-road performer for much of 2018 and year-to-date is actually now flat against the Pound; but near-term momentum might deliver year-to-date gains.

"The NZD outperformed as a poorly positioned market was squeezed by the reversal of risk. Further strength is possible," add ANZ.

Markets are currently focussed on the theme of risk-on vs. risk-off at present, opting to buy NZD when the market mood is positive and 'risk is on'.

At the heart of recent sentiment are developments concerning Italian politics which scared markets at the start of the week on news that Italian President had effectively vetoed the choice for finance minister of the fledgling coalition government.

But, signs that the two main political parties in Italy are intent on working through the latest challenges has given markets reason to express a collective sigh of relief.

And it's not just against the Pound that the New Zealand Dollar is eyeing key support resistance and support levels; the NZD/USD is also in play in this regard.

"The kiwi displayed its ‘beach ball under water’ properties overnight as the sub-0.69 level again proved too much of an ask. It tested 0.70 overnight and it looks like it could face further tests in the near-term, although our overall views are unchanged and any strength is something we’d see as an opportunity to sell into," say ANZ Research.