The New Zealand economy grew faster than investors were expecting in the second quarter of the year, raising bets the Reserve Bank of New Zealand (RBNZ) has scope to raise interest rates further.

New Zealand GDP grew 1.7% quarter-on-quarter in the second quarter of 2022 said Stats NZ, which was well above the 1.0% markets were expecting.

It also represented a solid rebound from the decline of 0.2% recorded in the first quarter.

The numbers took the year-on-year increase in GDP to 0.4%, which was double the number the market was expecting.

"Economy soars in Q2," says a note from local bank ASB in response to the data.

"Recent GDP outturns look have proved to be mostly noise rather than economic signal, but there looks to more substance behind the Q2 figures, with the opening up of the NZ economy a clear positive," says Mark Smith, Chief Economist at ASB. 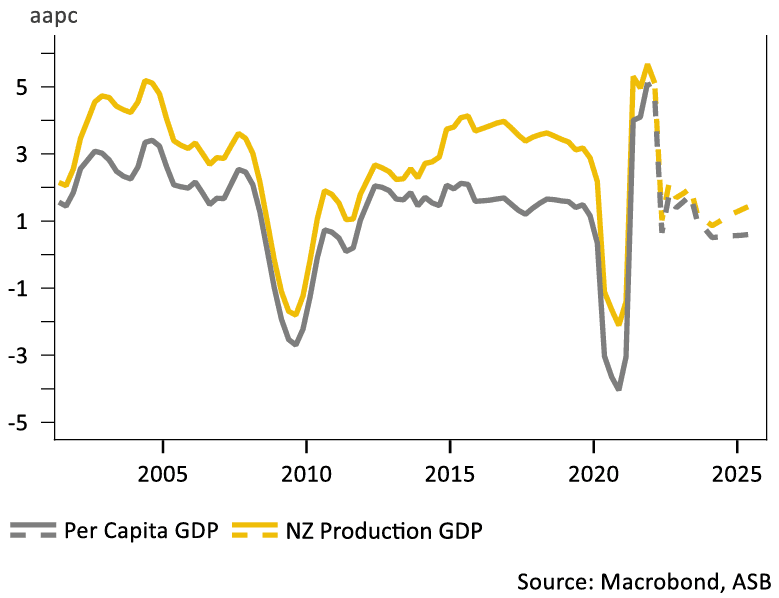 Highlighting the impact of reopening was the strong 2.7% quarter-on-quarter boost to service sector output.

On the downside, the goods value-add component contracted 3.8% quarter-on-quarter, thanks largely to the Marsden Point oil refinery shutdown, which weighed on manufacturing value-add (-5.9% in Q2).

ASB have raised their forecasts for the number of hikes they now expect to come out of the RBNZ over the remainder of the year by 25 basis points to 125 basis points.

Such an uplift in rate hike expectations could provide the Kiwi Dollar some support via the yield channel.

The Pound to New Zealand Dollar exchange rate (GBP/NZD) was quoted at 1.9182 following the data release, ensuring the pair remains near the middle of a range that has been intact since March.

The New Zealand to U.S. Dollar exchange rate (NZD/USD) was however at 0.6004, ensuring it remained near its 2022 lows and confirming the U.S. Dollar remains the supreme driver of this pair.

Nevertheless, the strong GDP data and any rise in rate hike expectations could limit the scale of any further USD advances.

"The GDP data are still noisy, and ongoing wage and CPI inflation pressures, combined with fiscal expansion, means the RBNZ's back is against the wall. They will be hiking the OCR to at least 4% by the end of the year no matter where activity lands," says Sharon Zollner, Chief Economist at ANZ Bank.