The market's reaction to news U.S. inflation might have peaked opens the door to further New Zealand Dollar strength, with economists at ANZ saying they expect a gradual appreciation in value through coming months.

The New Zealand Dollar was one of the bigger winners in a strong market reaction to news U.S. inflation read at 0% month-on-month in July, with the currency rising alongside global stock markets and other 'high beta' currencies.

This reaction is consistent with ANZ's view that global markets are currently highly sensitive to developments in the U.S. and therefore what happens there is likely to remain the key driver of the NZ Dollar.

"Markets have been extremely US-centric of late, and US themes have driven price action. We don’t see that changing any time soon," he adds.

U.S. inflation flatlined in July and suggests a turning point might have been reached, leading markets to ease back on their expectations for the number of interest rate hikes that are likely to come out of the Fed.

This is supportive of the global economic outlook as it suggests the recent rise in the cost of money driven by Fed hikes could be about to fade, which is in turn supportive of the New Zealand Dollar and other assets that are sensitive to global investor sentiment.

"If U.S. inflation proves to be more persistent and the U.S. Federal Reserve (whose policy rate is already on a par with the RBNZ’s OCR) is forced to hike more aggressively, and that drives a fresh bout of risk aversion, USD strength may return," says Croy.

Croy's comments were made ahead of the Wednesday release of U.S. inflation and the NZ Dollar's reaction has validated his views that U.S. inflation will be a key driver of the U.S. Dollar and other global currencies. 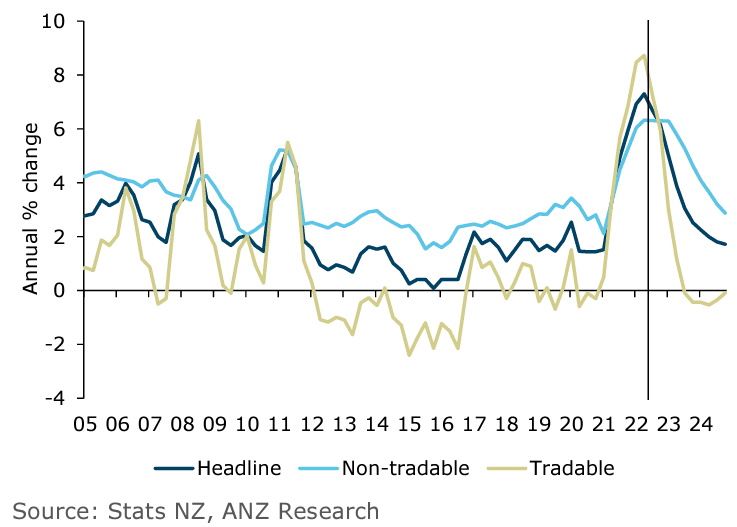 Domestic considerations are meanwhile supportive of the NZ Dollar says ANZ, these include New Zealand’s much higher bond yields and comparatively low levels of Government debt.

The Reserve Bank of New Zealand is forecast to raise interest rates to 4.0% by year-end, where they will stay.

This contrasts to the U.S. and UK where markets see interest rates being cut in 2023 as their respective central banks react to a sharp slow down in economic activity. 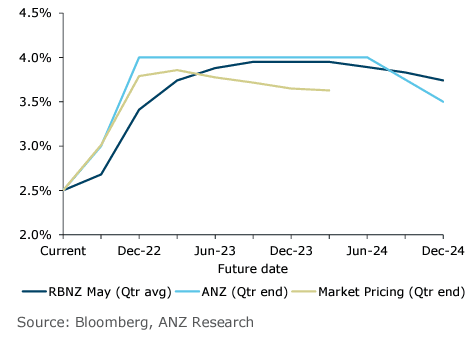 Above: ANZ's forecasts for the RBNZ OCR

This interest rate profile will likely support the New Zealand Dollar. Indeed, ANZ's forecasts call for gradual NZ strength into year end, as it closes the gap to their measure of fair value against the U.S. Dollar.

This gives a Pound to New Zealand exchange rate (GBP/NZD) forecast of approximately 1.96 and 1.92 for the above periods.