The New Zealand Dollar's strong run against the Pound might have stalled for now, but the UK currency's inability to take back more ground amidst a recent relief rally suggests further weakness in the Pound to New Zealand Dollar exchange rate is possible.

GBP/NZD has fallen from February highs at 2.0535 to 1.9107 at the time of this article's update, with the Russian invasion of Ukraine proving to be a significant disruptor for the pair.

Indeed, the New Zealand and Australian Dollars have proven to be amongst the beneficiaries of the war in Eastern Europe, with investors judging both economies to be less vulnerable to the stagflationary shocks posed by surging gas, oil and agricultural commodity prices.

"For economies that are geographically and economically more removed from the conflict, the impact is purely inflationary and signals further tightening. Hence, AUD, NZD, CAD and NOK may get double supports from the solid commodity prices and relatively hawkish monetary policies, relative to European G10 FX," says a weekly foreign exchange research brief from Barclays.

But New Zealand is a major agricultural commodity exporter and its balance of payments position will receive support from the surging price of commodities caused by the war.

It's export basket is dominated by dairy, but the country is a net cereal exporter with cereals accounting for 4.3% of total exports in 2020.

"New Zealand is largely considered the only pure 'agriculture currency' in G10 markets due to its protein and dairy exposure," says Geoffrey Yu, FX and Macro Strategist for EMEA at BNY Mellon. 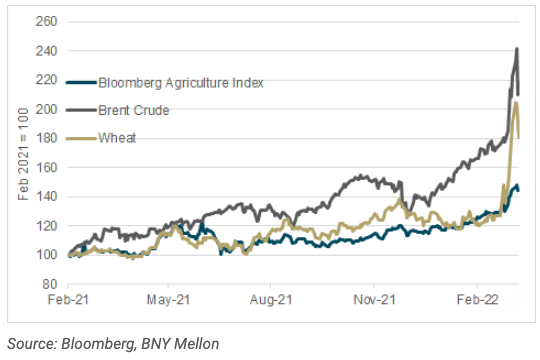 Yu says the United Nations Conference on Trade and Development has created a ‘trade dependence’ index, measured by the ratio of basic food balance to total merchandise exports.

"This not only measures absolute food import/export dependency but also the importance of food in general as part of the country’s trade composition," he explains.

He finds that within the G10, only Australia, Norway and New Zealand can be considered ‘strong exporters’.

"Australia and Norway’s ratios both stand at 6 (as of 2019), whereas New Zealand’s figure is at 49, confirming the NZD’s status as an ‘ag currency’" says Yu. 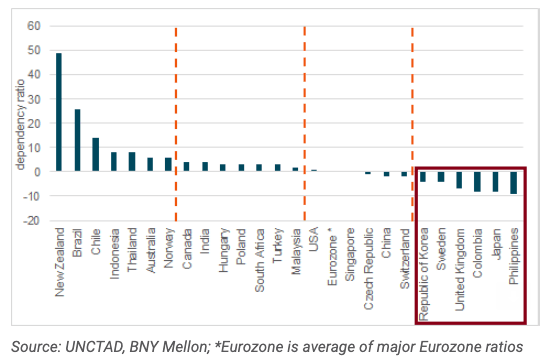 The head of the World Food Programme, David Beasley, warned this week the war in Ukraine could send global food prices soaring, with a "catastrophic impact" on the world's poorest.

Ukraine and Russia are both major exporters of basic foodstuffs and the war has already hit crop production, driving up prices.

"Although wheat prices have cooled a little from their red hot peak earlier this week, futures contracts trading in Chicago are still around $11 per bushel, still around 14 year highs and are up by almost 15% since the invasion began," says Susannah Streeter senior investment and markets analyst, Hargreaves Lansdown.

The commodity market disruption will not be resolved anytime soon, even if Ukraine and Russia eventually stop fighting.

Therefore the longer-term boost to New Zealand's terms of trade, and a corresponding deterioration to those countries that are net importers, can persist for months, if not years.

This is a fundamentally supportive development for the New Zealand Dollar. 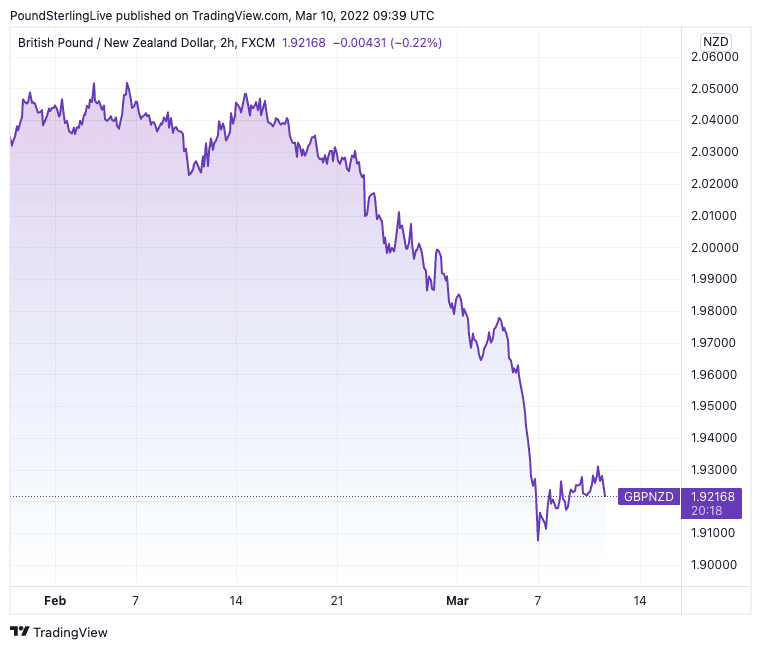 Stock markets, the Euro and Eastern European currencies surged this week as investors appear to have passed on from the initial 'shock' reaction to the Russian invasion of Ukraine.

Signs that the two protagonists continue to talk has certainly helped spur a recovery.

Given the New Zealand Dollar was one of the winners in this initial 'shock' phase of the war it could have been the case that it would give back a significant portion of those gains on a reversal in sentiment.

But this clearly has not happened: the New Zealand Dollar is winning in all conditions at present.

This bodes for further strength ahead and therefore the path of least resistance for the GBP/NZD exchange rate appears to be lower for the time being.

"With consumers and companies facing an inflation shock, these are testing times for many economies around the world, particularly in the UK," says Streeter.

This is because the scope of the inflationary shock in the UK is likely to be far larger than that in New Zealand, meaning consumer spending and confidence could rapidly decline later in 2022.

Therefore the Bank of England could raise rates in 2022 but then be forced into a hold in 2023 as the economy slows markedly.

But the RBNZ would not necessarily face similar growth headwinds, ensuring the rise in 'real'. bond yields - a critical driver of currency valuations - is greater in New Zealand than the UKAll eyes now turn to next Thursday's Bank of England policy decision where a 25 basis point hike will be announced.

But the Monetary Policy Committee is expected to strike a cautious tone regarding the economic outlook, suggesting this hike might not provide the Pound with much support.

"Besides the immediate rate decision, markets will be responsive to any changes to the MPC's guidance in light of the war in Ukraine," says Samuel Tombs, Chief UK Economist at Pantheon Macroeconomics.

Tombs expects the MPC to state "some further modest tightening in monetary policy is likely to be appropriate in the coming months" and to reiterate its view that CPI inflation eventually would fall below the 2% target, if Bank Rate rose as quickly as markets expect.

The market is currently prepared for a sizeable 152 basis points worth of hikes in 2022 and there are risks for Sterling bulls that this is simply not delivered.