- GBP/NZD rebound underway
- But must stay above pivot at 1.8996
- NZD remains vulnerable to global recovery story

The Pound is looking to secure a fifth successive day of gains against the New Zealand Dollar, with the GBP/NZD exchange rate rising from last week's multi-month low at 1.90 to quote at 1.9348 at the time of writing.

The Pound-to-New Zealand Dollar exchange rate has been consolidating through the course of July in a move that suggests the sharp decline that characterised the April-June period might be fading.

The consolidation has since morphed into something that resembles a recovery by Sterling and analysis from Trading Central - a technical analysis provider - shows that the upside is expected to prevail as long as 1.9231 is support.

Trading Central say their base case is for a rebound on the daily chart timeframe to extend, with targets at 1.9719 and then 1.9900 eyed initially. 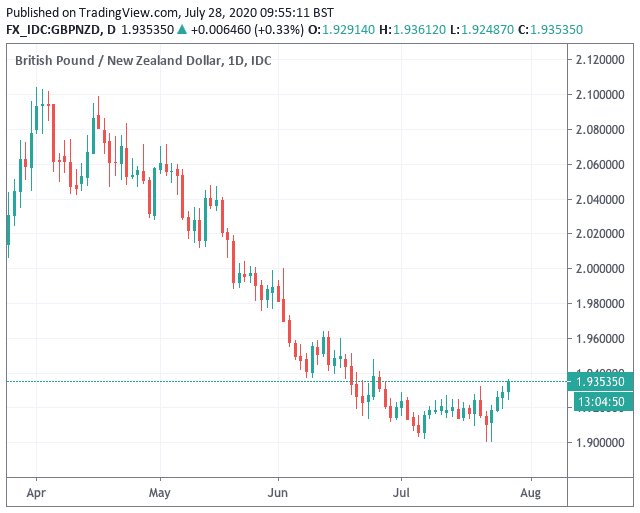 The Pound's recovery against the New Zealand Dollar comes despite persistent angst over Brexit trade negotiations which could well flare up over coming weeks and trigger some decisive Sterling downside. Our reading of the Brexit picture is that markets are still seeing a greater chance of a deal being struck than not, suggesting the risk-reward of selling Sterling heavily at this point is poor.

Markets are eyeing October as being critical for a deal, so until then pairs like GBP/NZD could find themselves heavily influenced by the global picture.

Indeed, the New Zealand Dollar maintains a correlation with global investor sentiment which is best expressed via the movements of the S&P 500 index, which topped out last week and underwent something of a correction lower.

We would need to see global markets find a fresh wind before betting on further New Zealand Dollar gains, and with the global covid-19 case load continuing to rise - including in the U.S. - this is a questionable ask in the near-term. Geopolitical tensions between China and the U.S., as well as U.S. political jockeying over another round of covid fiscal support, are further reasons to expect investor wariness.

Further consideration must be given to the fact that while New Zealand has effectively eliminated covid-19 infections within the country, their borders remain sealed which is problematic for a small and open economy such as New Zealand's.

"A large share of New Zealand’s exports goes to Asia, leaving it exposed to a global growth slowdown. The mix of lower export volumes, tourist arrivals, commodity prices and business confidence will continue to weigh on the NZD, despite recent outperformance from improving risk sentiment," says Daniel Been, Head of G3 & FX Research at ANZ Bank.