The NZ Dollar has risen following comments from various Reserve Bank of New Zealand officials that suggest that cutting the Overnight Cash Rate to below zero remained some way off, "it’s got to be seen to be effective, efficient and operationally capable," said Governor Adrian Orr in a media interview.

Expectations had been building that the RBNZ would cut interest rates yet further in coming weeks - and raise the level of its quantitative easing programme - in order to provide support for the New Zealand economy, which has been battered by the global coronavirus crisis.

When a central bank loosens policy, the currency it issues tends to fall in value. Yet with most major central banks cutting interest rates and printing money under expanded quantitative easing programmes due to the coronacrisis, the relative impact of RBNZ action on the NZ Dollar would assumably be limited.

However, in proportion to the country's GDP, the RBNZ intervention is one of the largest in the G10 and this has understandably weighed on the performance of the NZ Dollar.

News that the RBNZ is in fact in no hurry to boost its assistance to the economy is therefore considered to be supportive for the NZ Dollar. 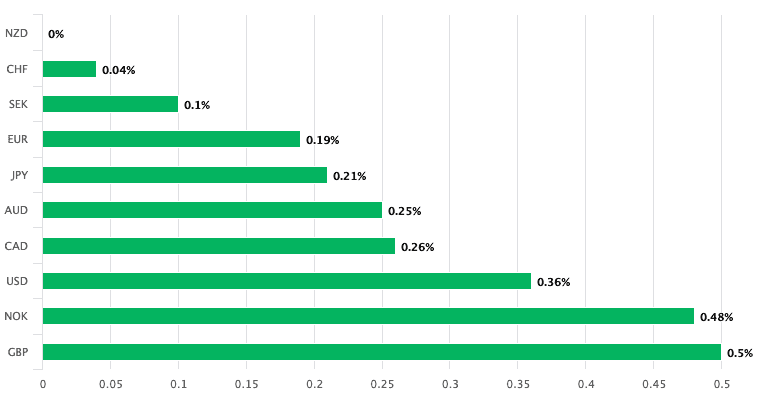 Above: The New Zealand Dollar is outperforming its peers on May 20.

The messaging by RBNZ officials on the prospect of further interest rate cuts was in turn reinforced by Orr's deputy, Geoff Bascand.

"NZD has been under pressure recently after various officials expressed a willingness to consider negative rates, but Deputy Governor Geoff Bascand said the Monetary Policy Committee had made “a clear statement” that rates are on hold until early next year," says Marshall Gittler, Head of Investment Research at BDSwiss Group.

"We are very conscious that our word matters, and the credibility of what we say is very important to the Reserve Bank. We are confident we won’t be moving to negative interest rates before March next year,” said Bascand.

With the RBNZ clearly in no rush to cut rates, a downward force on the New Zealand Dollar appears to be lifting, potentially allowing for further gains.