- GBP/NZD is pulling back inside a rising channel

- New Zealand Dollar to be moved by labour data

An optimistic mood amongst global investors mean the UK currency is losing ground against the likes of the New Zealand Dollar and South African Rand.

Aiding investor sentiment on Monday, U.S. Secretary of Commerce Wilbur Ross said that a phase-one deal will be reached with China soon and that the American companies will be given licenses to do business with the Chinese tech giant Huawei ‘very shortly’.

The likes of the Rand, New Zealand Dollar, Australian Dollar and other currencies that are tuned into the health of global trade are understandably advancing on Sterling in this environment.

Studies of the charts meanwhile show the pair is continuing to pull back after peaking on October 16 and is now trading in a sideways range with a marginal bullish bias. 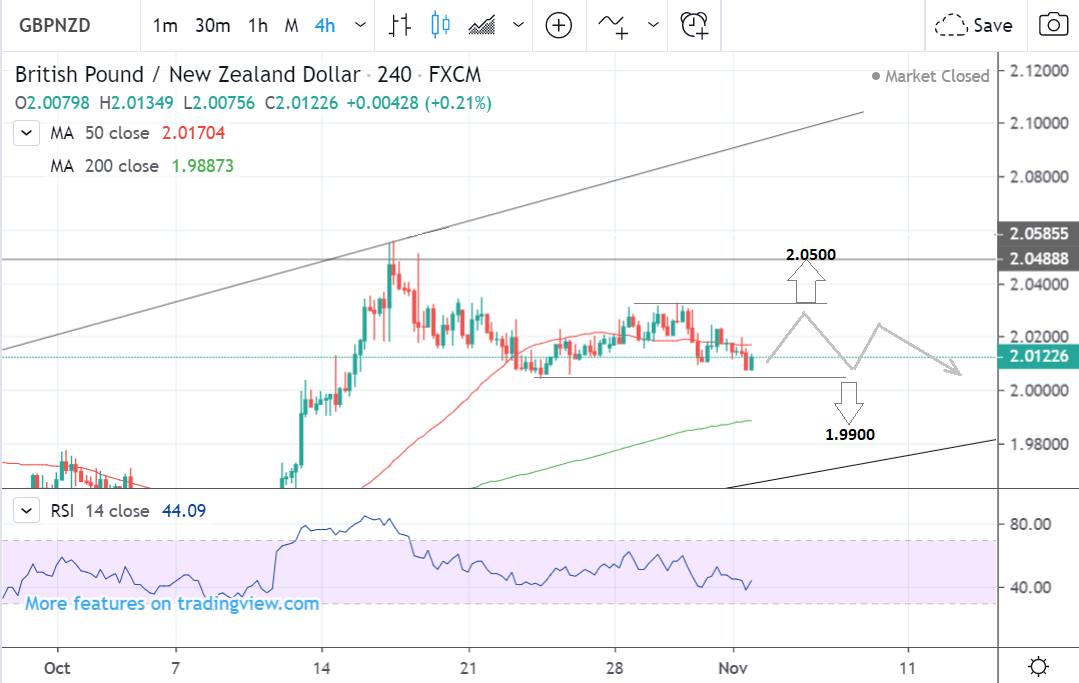 The 4 hour chart - used to determine the short-term outlook, which includes the coming week or next 5 days - shows how the pair is correcting back and trading inside a sideways range.

The range could either continue, break higher or break lower - all are equally possible.

Due to the fact that the medium-term trend is bullish, there is a slight bias to more upside evolving.

The daily chart shows how the pair appears to be correcting back in a 3-wave ‘abc’ pattern within a rising channel formation. 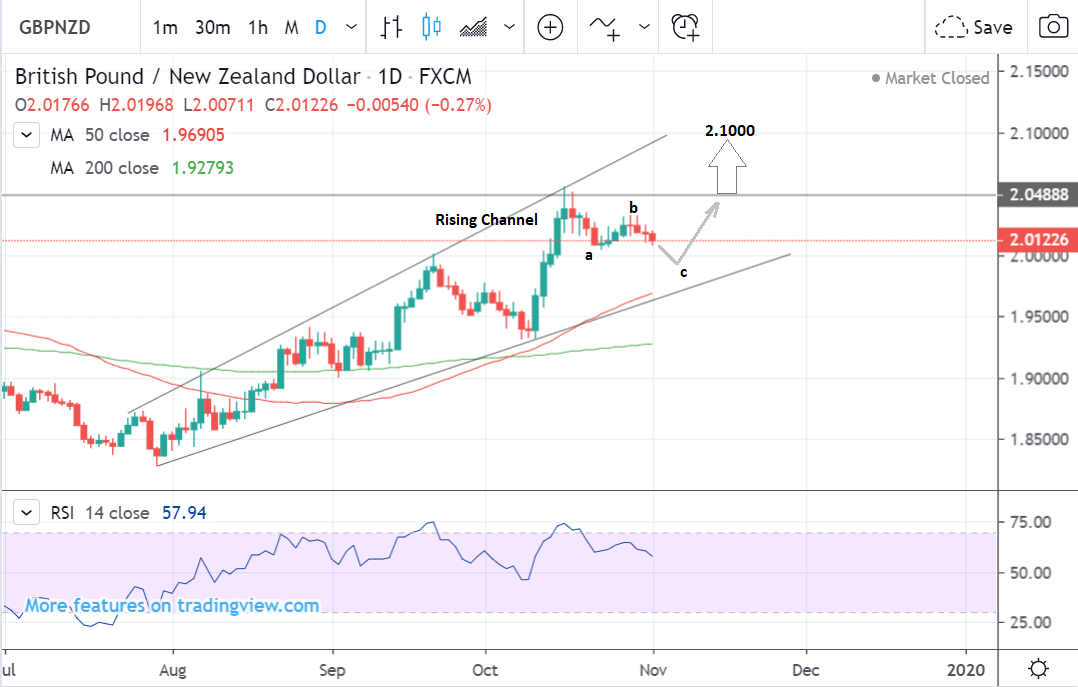 If this is so, then the pair could continue falling a little further as wave-c finishes but will then likely rebound as the uptrend resumes.

The ultimate confirmation would come from a break above the 2.0500 highs, which would be expected to lead to a continuation up to a target at circa 2.1000.

The weekly chart shows the longer-term trend which is sideways and the exchange rate is currently at the top of the recent range. 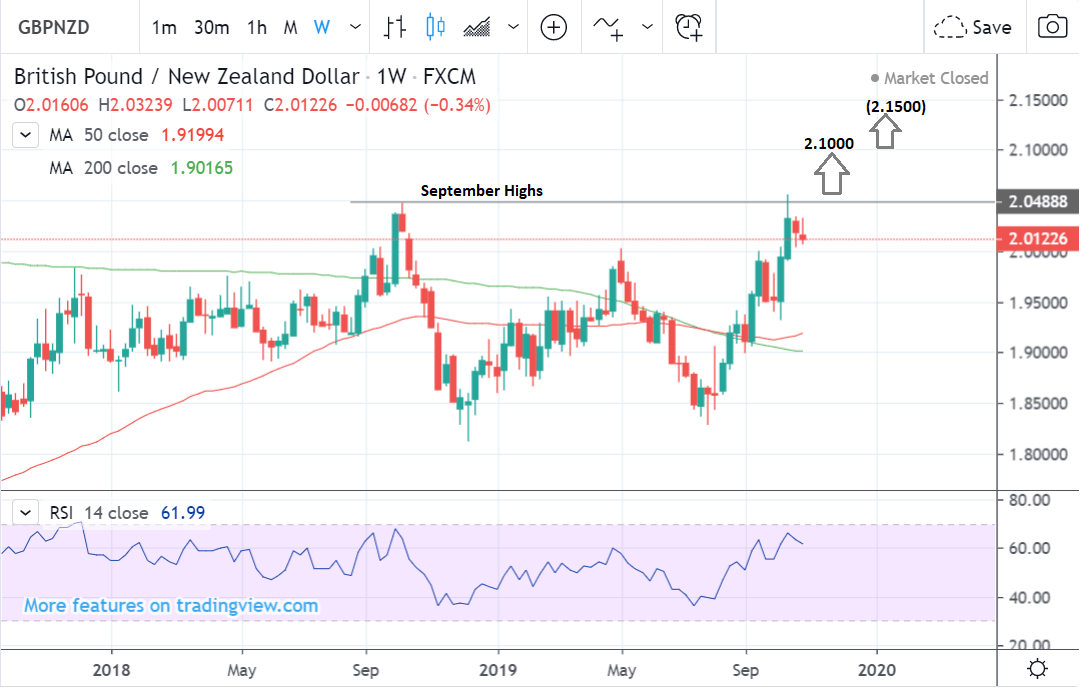 A breakout higher - above the September highs - in line with the forecast on the daily chart, to 2.1000, could potentially go even further in the longer-term, to a target at 2.1500 eventually.

The main driver for the New Zealand Dollar in the short-term is the labour market report on Tuesday, as well as geopolitical events and anything impacting on the outlook for China, its principal trading neighbour.

The Reserve Bank of New Zealand (RBNZ) is scheduled to have its next policy meeting on November 13 and this could be a critical event for the Kiwi.

If the RBNZ cuts interest rates again the Kiwi will weaken because lower interest rates reduce net foreign capital inflows and demand for the local currency.

At the moment views are mixed as to whether the RBNZ will cut interest rates or not but a critical factor in determining whether it decides to will be the result of the employment report for Q3, out on Tuesday at 21.45 BST.

“We are going to get employment data out on Tuesday and could be crucial in deciding which way the RBNZ go at its meeting later in November. At the moment it is looking 50/50 call for the RBNZ to cut interest rates,” says Raffi Boyadijian, senior investment analyst at FX Broker XM.com.

The other key driver of the Kiwi may be market speculation as to whether the China-U.S. Phase 1 trade deal will evolve into something bigger and more enduring or be a ‘one and done’ deal.

Chinese officials are sceptical that Phase 1 will lead to a bigger deal because that would need the U.S. to roll back all tariffs, something Trump is highly unlikely to agree to, according to a report by Bloomberg last week.

Further information regarding this issue may move the Kiwi but it is unlikely to be a major factor since it is unclear whether markets have actually priced in the fulfilment of a comprehensive ‘bigger deal’ yet or not.

Rather, markets only seem to have just completed pricing in Phase 1 so far, so it seems unlikely speculation relating to a major deal down the road will be a big move of markets unless it taints the current negotiations.