- NZD set to rise against USD, is a buy, says Bank of America.

- But Rabobank tips more losses on damage to China's economy.

The New Zealand Dollar is poised to outperform over the coming months, according to analysts at Bank of America Merrill Lynch, who say the Kiwi currency will benefit the most from the recent detente in the U.S.-China trade war and anticipated interest rate cuts from the Federal Reserve (Fed).

New Zealand's Dollar has already risen 2.9% in the last week, but it's still down by another 3% over the last three months and Bank of America has told institutional clients to make use of a specially crafted FX options strategy in order to exploit what it sees as scope for notable upside in Kiwi over the coming three months.

The bank is advocating a 'bull call spread' strategy that will pay investors a return if the NZD/USD rate rises from 0.6422 on Tuesday, to within a range spanning the 0.6550 and 0.6700 thresholds. The particular kind of strategy recommended will limit the losses sustained by investors in the event the trade does not work out.

"Scorecard signals are aligned bullish cyclically-sensitive commodity currencies and bearish funding currencies. Signals are aligned bearish US dollar except against funders. Within this pattern, NZD/USD stands out as a preferred near-term expression. With a net score of +6 (strongly bullish), NZD/USD is currently supported by valuation, flows, monetary policy expectations, growth dynamics and seasonal signals," says Ben Randol, a strategist at Bank of America. 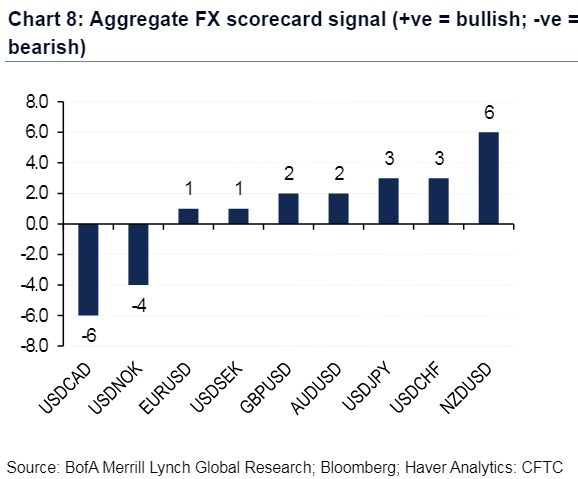 New Zealand's Dollar has been highly volatile in 2019 as the U.S. trade war with China has ebbed and flowed between escalation and de-escalation, which has seen the commodity-backed and China-sensitive Kiwi buffeted with each increase in tensions, only for it to then be rescued with each short-lived detente to have been agreed.

Chinese officials said last week they'll attend eagerly-anticipated talks with the U.S. in Washington this month with a view to organising more substantive negotiations for October, leading markets to speculate that an agreement to end the tariff fight between the world's two largest economies is near. It's not the first such round of speculation to have been seen this year and nor did it come soon enough to prevent fresh U.S. tariffs from hitting Chinese exports or the inevitable retaliation that followed. 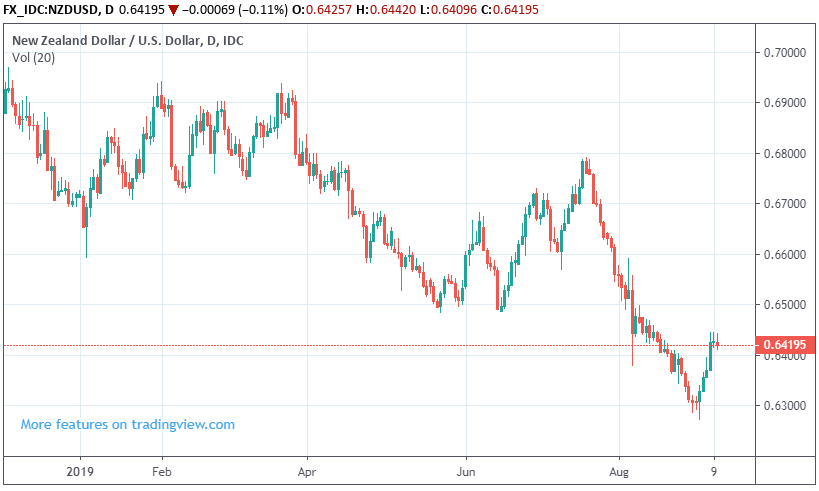 President Donald Trump imposed a 15% tariff on the remaining $300 bn of Chinese exports to the U.S. that are not yet covered by punitive levies, with around half of those levies having been imposed on September 01 and the remainder now scheduled to go into effect on December 15. The decision came at the same time the U.S. increased the tariff levied on the other $250 bn of Chinese exports to the U.S. from 25% to 30%.

Last week's news of fresh talks between the two sides came too late to prevent half of those tariffs being implemented but, if succesful, they could yet avert the imposition of more levies set to go into effect in December. Those latter tariffs will weigh on the already-embattled Chinese economy and, by virtue of New Zealand's connection with it, the Kiwi too. But a deal averting them would have the opposite effect

"Its underperformance reflects the rising uncertainty around global trade, weaker commodity prices and the surprise 50bp cut by the RBNZ in early August . External conditions permitting, we think that a tactical rally is justified," Randol writes, of the Kiwi. " While the RBNZ will likely cut rates further, substantial trade weighted NZD depreciation offers room for more measured near term policy communication. By contrast, recent US economic weakness may galvanize a more dovish Fed."

The trade war is not the only factor tipped to drive the Kiwi higher in the months ahead because changes in the international interest rate picture are also expected to provide support to the New Zealand Dollar if the Federal Reserve cuts U.S. rates to the extent that markets believe it should. 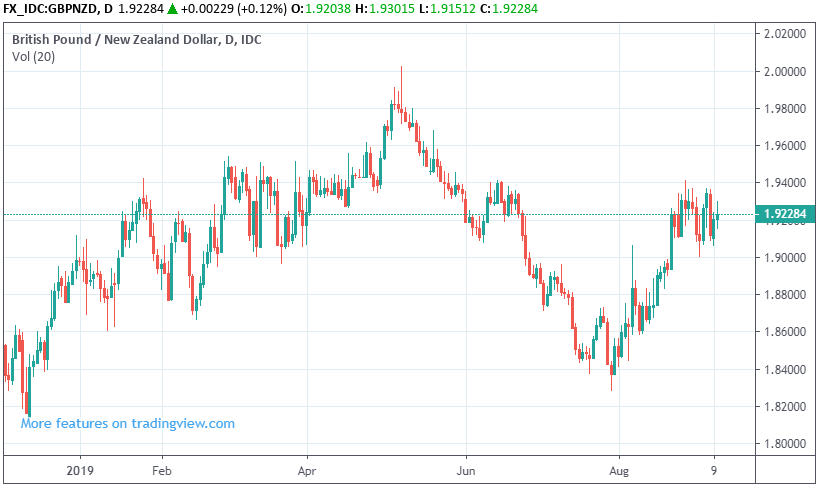 The Reserve Bank of New Zealand (RBNZ) cut its cash rate 50 basis points to 1% in July but the Kiwi has already paid the price for that and the bank is now expected to leave rates unchanged for a while as it observes the economic impact the three cuts made in total this year. Meanwhile, markets expect another cut from the Fed at the end of September and if the bank says anything that suggests it might deliver the full five cuts markets anticipate before the end of 2020, it cold hurt the U.S. Dollar.

"The slowdown in growth in China has left the New Zealand economy exposed through trade flows. In July NZ goods exports dropped 5.8% y/y led by a 16% fall in milk powder, butter and cheese and a 19% plunge in logs. Timber is NZ’s third most valuable export," says Rabobank's head of FX strategy, Jane Foley. "NZD/USD to retain a downward bias towards 0.61 on a 12 month view."

Fed cuts would be good for the NZD/USD rate, which Bank of America forecasts to end 2019 up at 0.69 while the GBP/NZD rate remains around 1.92, but not all analysts are as upbeat in their outlook for the New Zealand currency. Rabobank, a Netherlands-based lender with a global footprint, is looking for the Kiwi to be blighted by more losses before long. It forecasts the NZD/USD rate will fall from 0.64 to 0.61 over the next 12 months, a difference of more than 5%.

"Exporters remain concerned that ongoing trade tensions between the US and China could further weigh on the value of the CNY vs. the NZD and disadvantage domestic producers. Tourism is another NZ industry which is vulnerable to slowing growth in China. Brexit has also been cited by the Ministry of Business, Innovation and Employment tourism as potentially weighing on the number of overseas visitors," Foley says.