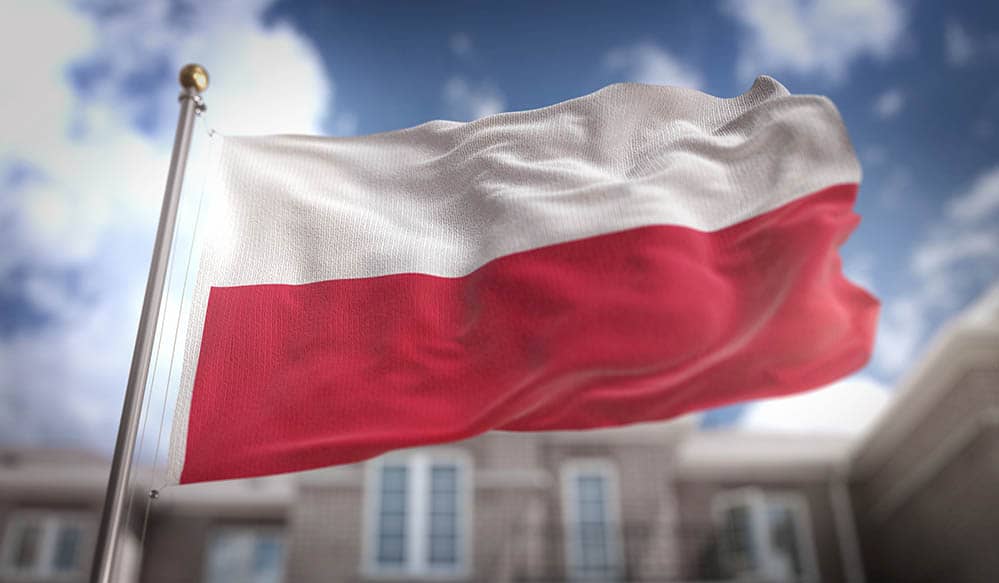 The Zloty’s recovery from recent all time lows has stalled in the wake of December’s National Bank of Poland (NBP) policy decision and some forecasters are warning the Polish currency may be on the cusp of another turn lower that would likely lift GBP/PLN into the new year.

Poland’s currency had been an outperformer during the early days of December as it rebounded from all time lows against the Dollar, Pound and Euro established during a late November global market sell-off, although the Zloty had run out of steam by Friday.

The Zloty beat a further retreat from major and emerging market currencies alike on Friday, extending losses that appeared to be triggered by Wednesday’s National Bank of Poland decision to lift its interest rate by 50 basis points to 1.75%.

That was the third interest rate rise since October and came after Polish inflation topped 7% in November, stoking expectations in the market that further increases in borrowing costs would be announced over coming months as part of an effort to reign in price growth.

“The exchange rate weakened, not only because the step size was small, but more because the MPC statement showed little urgency given the high inflation rate,” says Tatha Ghose, an analyst at Commerzbank. 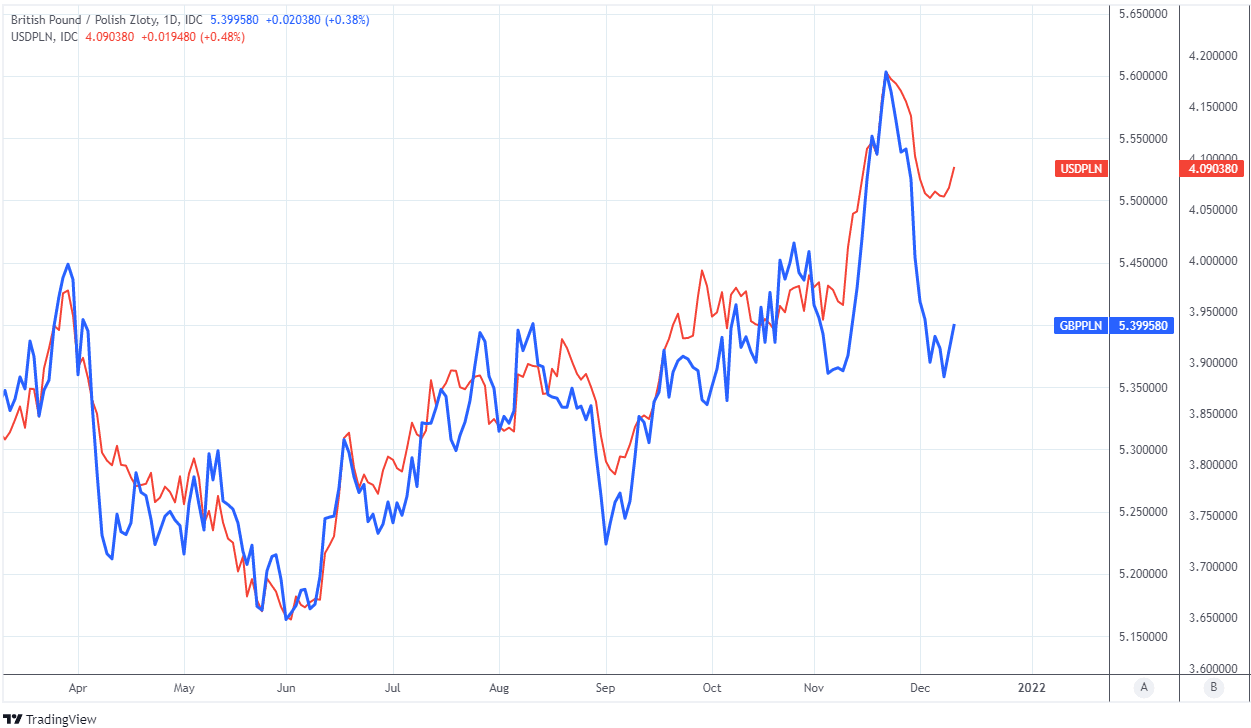 Above: GBP/PLN shown at daily intervals alongside USD/PLN.

Poland’s Zloty continued its retreat from the Euro, Pound and Dollar on Friday even after NBP Governor Adam Glapinski suggested strongly in a Thursday press conference that further interest rate rises are likely to be announced throughout next year.

“We think that the messaging is consistent with our rate forecast for further tightening by the NBP, and we reiterate our forecast for rates to reach +3.00% early next year,” says Adam Daly, co-head of CEEMEA economics at Goldman Sachs.

“Although the recent deterioration in the pandemic situation in Poland presents downside risks to activity, we think the NBP is now firmly focused on bringing inflation under control,” Daly and colleagues wrote in a Thursday research note.

Many economists expect Poland’s interest rate to rise from 1.75% in December to as much as 3% next year while Governor Glapinski said nothing to discourage this notion in Thursday’s press conference, although this has done little to help the Zloty.

Commerzbank’s Ghose says the market was likely disappointed by the size of this week’s interest rate rise as well as a perceived lack of unease about recent increases in inflation, which has made the inflation adjusted interest rate in Poland the lowest in the region.

“Poland has the most negative real interest rate among CE3 – the pace of recent rate hikes by NBP does not suggest that it will begin to overtake other central banks soon. Hence, we forecast the zloty to remain under pressure as global monetary conditions tighten,” Ghose wrote in a Thursday note.

The Commerzbank team forecasts that negative inflation adjusted returns on Polish assets will continue to weigh on the Zloty during the months ahead, likely lifting USD/PLN to 4.23 by the end of the first quarter next year while taking GBP/PLN up to 5.6260.

Both would mark new record lows for the Zloty, although the Polish currency’s decline is expected to deepen throughout 2022, with USD/PLN expected to reach 4.32 by year-end while GBP/PLN is seen rising to 5.7476.

“Although NBP has broken free from its status quo and is hiking rates, the rate hikes are likely to lag compared to the very high inflation rates being observed. This means that the real carry on the zloty is still likely to be one of the most negative,” Ghose said in December forecast review.

“This will be against a background of the Fed and ECB progressively tightening their stances,” he added. 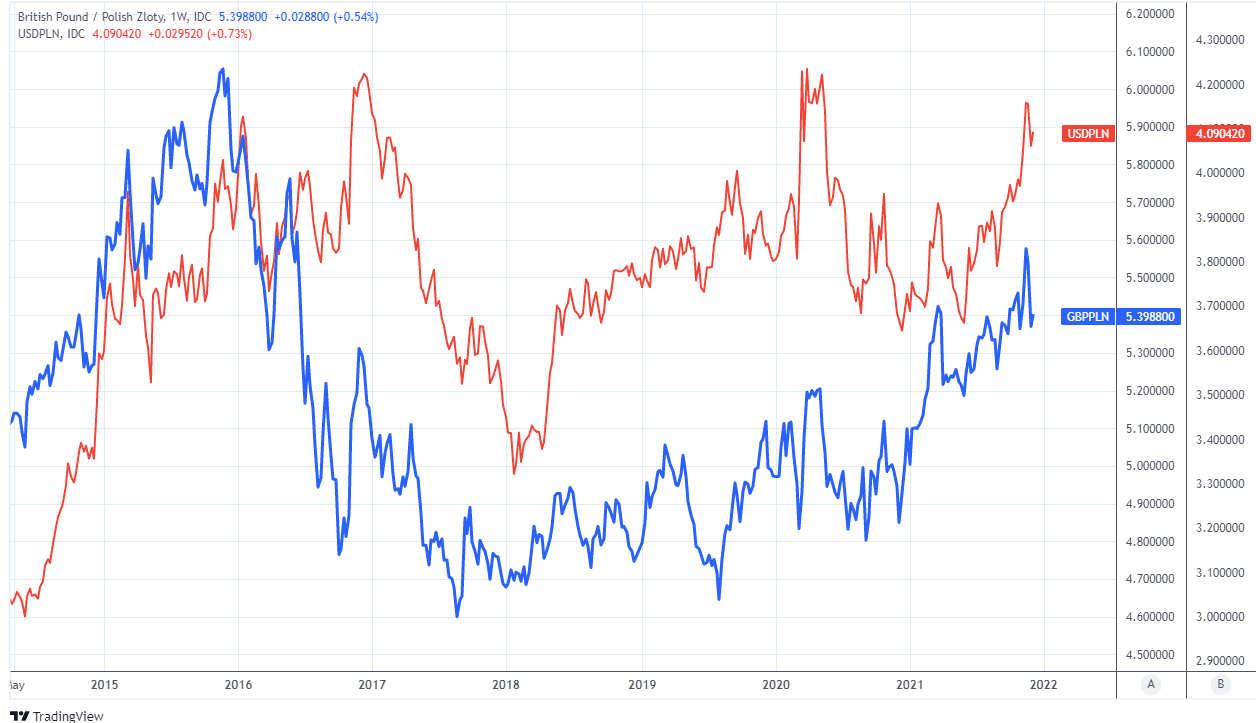 Above: GBP/PLN shown at weekly intervals alongside USD/PLN.