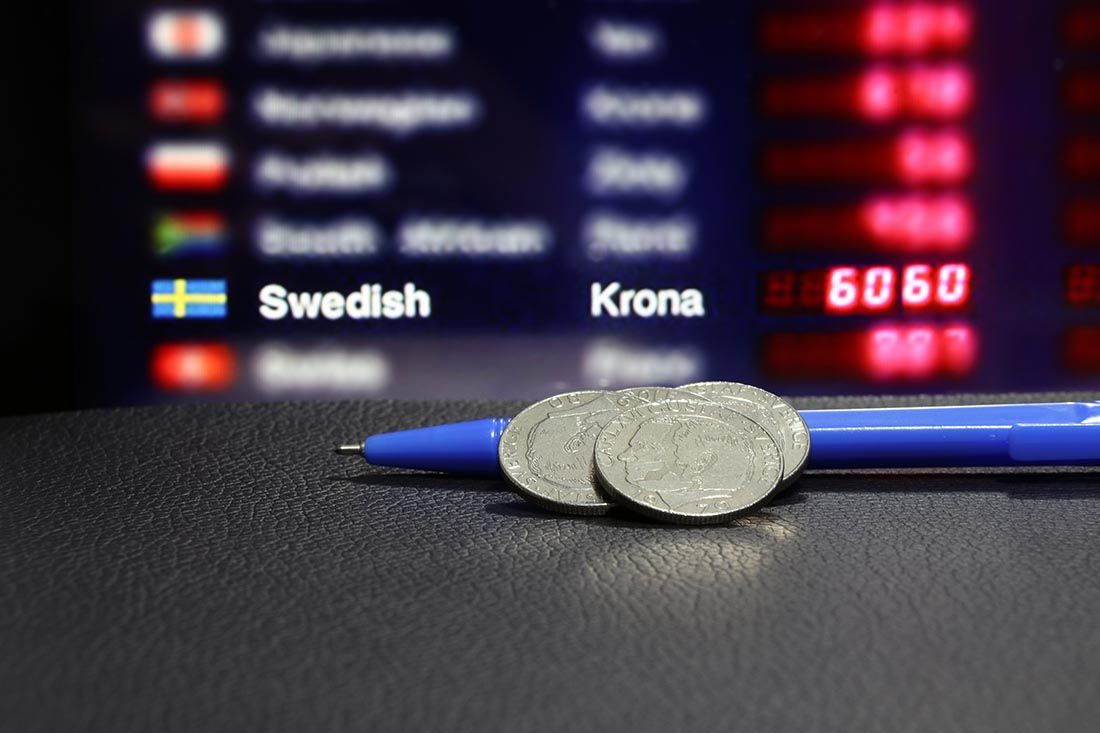 The Krona topped the major currency rankings in the penultimate session of the week after the Riksbank signalled that it could be about to shift to a ‘hawkish’ interest rate stance that some analysts say would act as a catalyst for a turnaround by the beleaguered Swedish currency.

Sweden’s Krona was the best performer on Thursday following the Riksbank’s November monetary policy announcement but it remained the worst performer of the week by a comfortable distance and retained a spot near the bottom of the rankings for the month, recent quarter and 2021 year.

The Krona had fallen almost as much as the Polish Zloty and Japanese Yen on Thursday when 2021’s performance was measured against the Dollar after USD/SEK rose more than 10% in the 11 or so months to late November, while the Pound-to-Krona rate had risen more than seven percent.

GBP/SEK had reversed almost two thirds of its 2020 decline by Thursday although the latest update from central bankers at the Sveriges Riksbank suggests there are risks of a turn lower by the exchange rate over the coming months, especially if some analysts are right in their interpretation of it.

“We maintain our view that the Riksbank will tighten monetary policy earlier than what they signalled today. We think that securities holdings will be scaled back during the second half of 2022 and reduced further in 2023, and that the repo rate will be hiked already in the second half of 2023,” says Knut Hallberg, a senior economist at Swedbank. 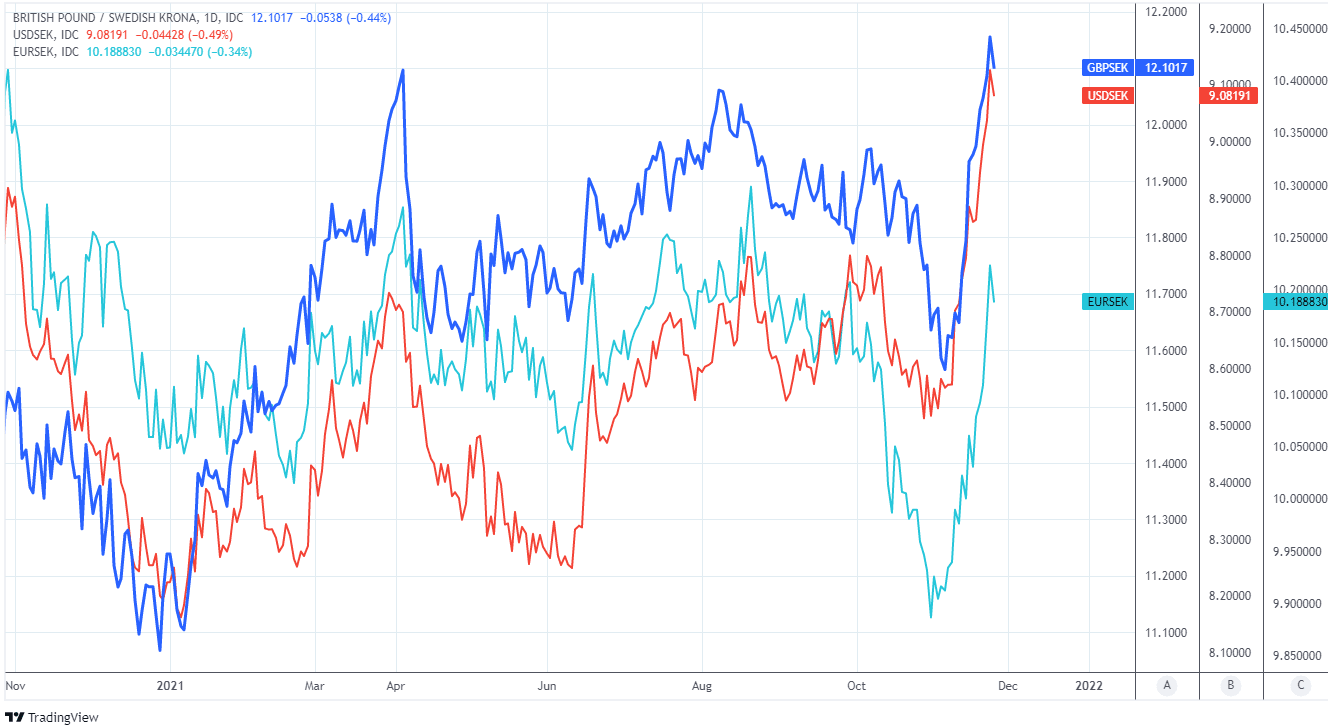 Sweden’s central bank cited a strong domestic economic recovery and rapid increases in inflation for its updated forecast that an interest rate rise could become necessary before the end of 2024, one that would lift the bank’s benchmark cash rate above zero percent for the first time since 2014.

“The Board's forecast is that the holdings will remain roughly unchanged in 2022, after which they will gradually decrease, and that the repo rate will be raised in the latter part of 2024. With this monetary policy, inflation is expected to be on target going forward,” the Riksbank said on Thursday.

The Riksbank did not cut its 0% interest rate in response to the coronavirus crisis and instead chose to purchase large volumes of government bonds after having spent years experimenting with negative interest rates before lifting its benchmark for borrowing costs from -0.50% to 0% in 2019.

“Our economists are projecting a hike late next year. Inflation expectations in Sweden are less anchored than in its G10 peers and more sensitive to spot inflation developments, suggesting a fairly rapid policy shift is possible. Already, expectations have jumped higher and are now at or slightly above the Riksbank’s 2% target, which should allow for a more balanced policy outlook fairly soon,” says Michael Cahill, a G10 FX strategist at Goldman Sachs. 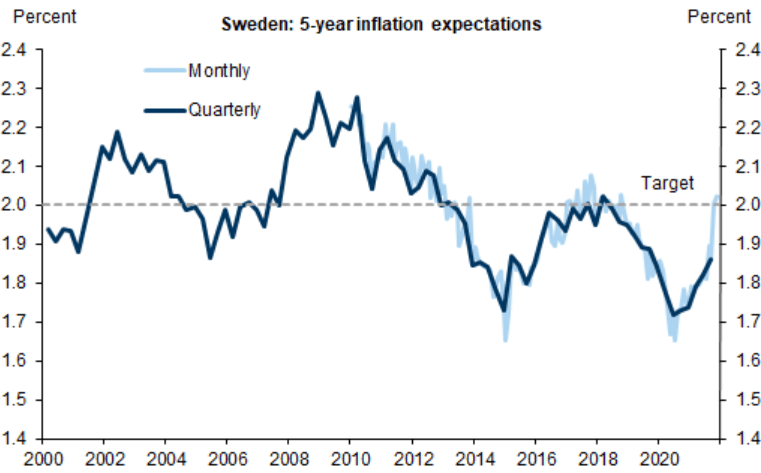 Any decision to raise Sweden’s cash rate would mark a decisive departure from the negative interest rate era and some analysts including the research team at Goldman Sachs are suggesting that such a move could come much sooner than the Riksbank and financial markets are anticipating.

Buying the Swedish Krona against the Euro is among the top 2022 trade ideas advocated by Goldman Sachs, which has tipped EUR/SEK for a decline to 9.50 and looks for GBP/SEK to fall from 12.0881 on Thursday to 11.0305 by the end of next year.

“That said, we are reasonably concerned about the international growth context given rising covid restrictions and severe supply disruptions as SEK has a positive beta to EUR/USD, like other European satellite currencies. So we would be cautious about fully stepping into this view at the moment,” Cahill and colleagues cautioned in a Monday note to clients.

The Riksbank’s anticipated response to an expected further increase in inflation next year is a major driver of the bank’s outlook for the Krona and is something that could stand in stark contrast to the inflation situation in the Eurozone and European Central Bank (ECB) response to it.

While some policymakers have indicated over the last fortnight that they could be open to changing their stance, European Central Bank rate setters have for the most part continued to write off recent increases in inflation as temporary and unlikely to merit a policy response.

The ECB’s forecasts continued to suggest that inflation would likely fall back below its 2% symmetric target by the end of its forecast horizon back in October and the bank is widely expected to be among the last to begin winding down its quantitative easing programme or lifting interest rates.

This and the Riksbank’s shifting position could mean that a turn lower in EUR/SEK and recovery for the Krona against other currencies is just a matter of time, although some economists are sceptical of that notion.

“The Bank had previously projected the repo rate to remain on hold at zero throughout its projection horizon, which increasingly seemed out of touch, both with its past tendency to forecast rate hikes that never arrived, and also the global monetary policy zeitgeist,” says David Oxley, a senior economist at Capital Economics. 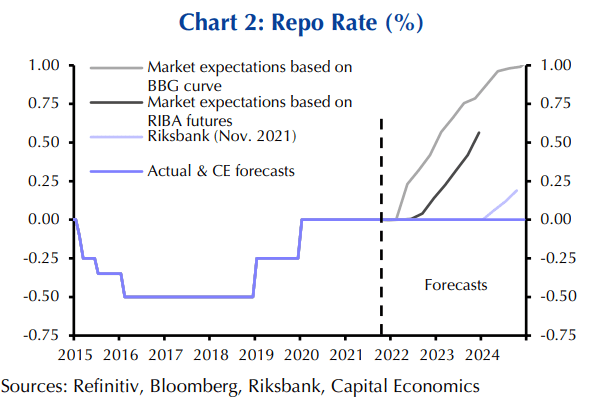 “To be clear, though, the Rikbank’s projection is still very dovish compared to the market, which is currently pricing in the repo rate rising sooner and faster. We have yet to firm up our end-2024 forecasts, but think the Bank’s projection will be closer to the money than investors’ expectations,” Oxley wrote in a note to clients following Thursday’s announcement.

Oxley and colleagues cautioned clients on Thursday that despite the forecast change the Riksbank has remained ‘dovish’ in its assessment of the inflation outlook and warned that financial markets are already pricing-in an interest rate rise from 0% to 0.25% by the end of 2022, which is far sooner than the bank envisages and so could potentially limit the Swedish Krona’s ability to benefit any eventual policy change.

“The Riksbank forecasts a fall in inflation next year. The most important reason is that energy prices are not expected to rise as quickly next year. Another reason why inflation will slow down is that the bottlenecks will be resolved when growth enters a calmer phase. If inflation is to be close to the target in the longer term, cost pressures need to increase more permanently. This requires continued support from monetary policy,” the Riksbank says. 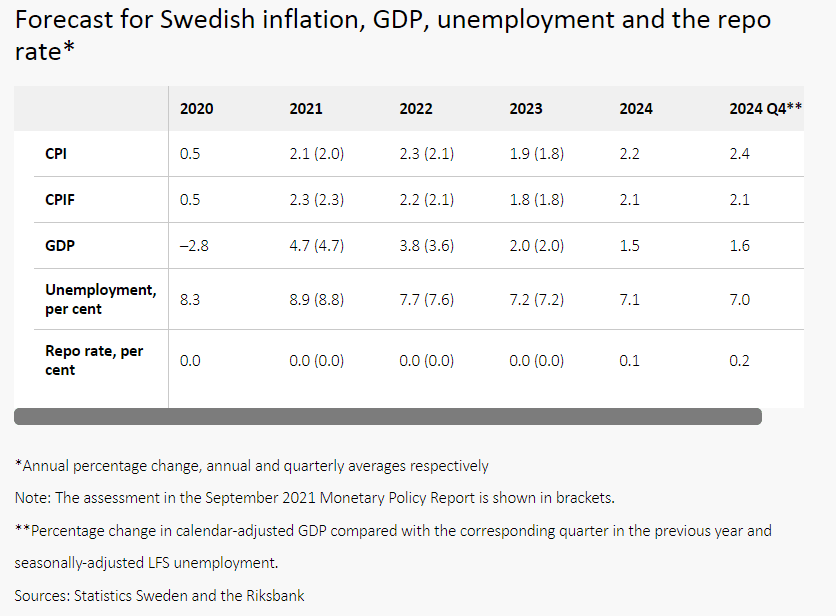