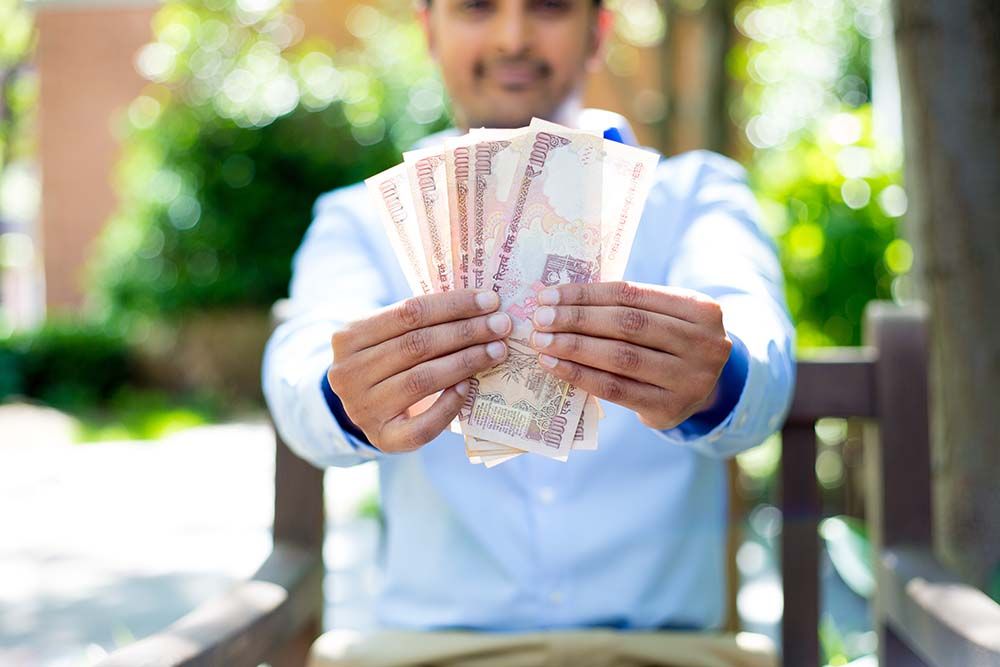 - GBP/INR in short-term uptrend after strong week.
- Rate has scope for further gains in days ahead.
- Indian GDP and Brexit headlines are key drivers.

The Pound-to-Rupee rate was trading at 92.55 Monday after rising more than 0.5% in the previous week, which established a new short-term uptrend that could give the exchange rate cause to rise further during the days ahead.

Recent gains were due to signs Prime Minister Theresa May could have a better chance of getting Brexit deal through Parliament than was previously the thought, and following rumours that a three month deferral of the March 29 Brexit day is increasingly likely, which might void the odds of a no-deal Brexit.

From a technical standpoint the outlook for GBP/INR remains bullish. The pair is recovering after a deep pull-back from its January highs and has recently found a floor at the level of the 50 and 200-day moving-averages. 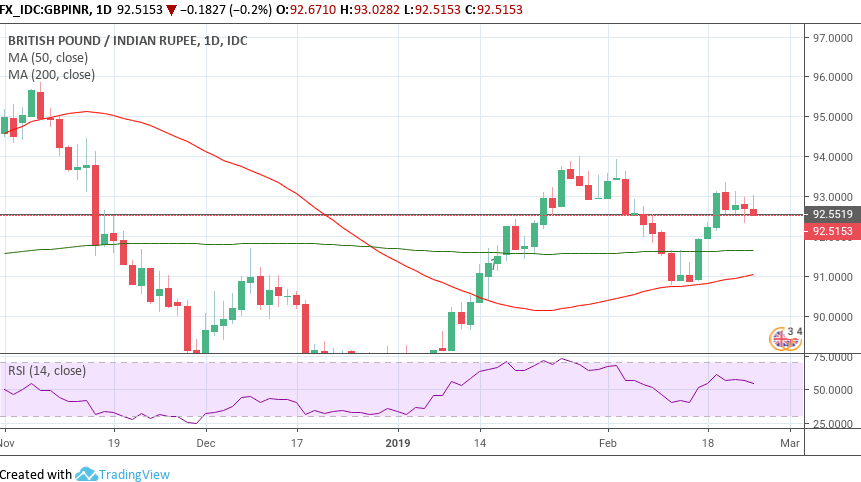 Last week we were only tentatively bullish, but this week we are more confidently so.

The hammer-reversal candlestick that formed on the weekly chart gave us hope in our previous report. Now, with the 50 and 200-week moving averages having provided support to the market, the GBP/INR pair entered this week with a bullish set-up showing on the charts.

The structure of the market also favours a bullish rather than bearish outlook. The strong rally in January, followed by the pull-back in the first half of February and then the start of another move higher some two weeks ago looks like an unfinished cycle-wave higher. The January high of 94 is now a prospect.

The pair is currently testing a key make-or-break resistance level at 92.55, which is the midpoint of the previous downmove otherwise known as the 50% Fibonacci retracement level. This level needs to be broken decisively otherwise it could act as a major obstacle for the new uptrend. 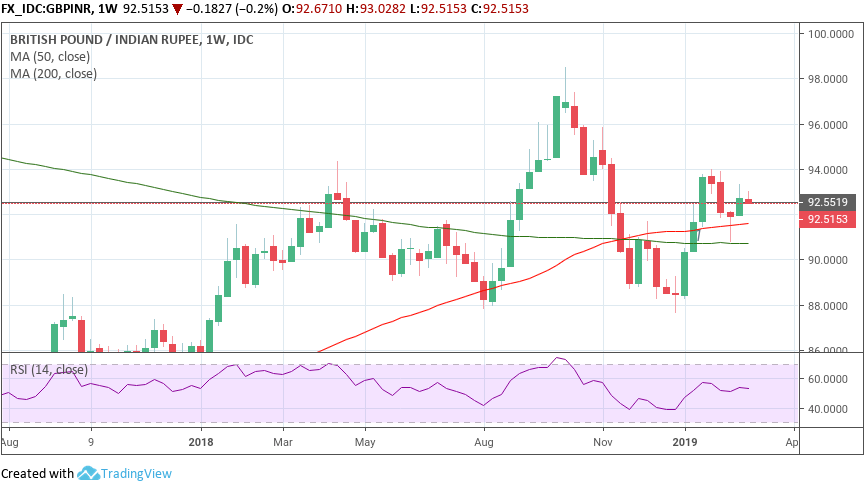 The Indian Rupee: What to Watch this Week

The main data release for the Rupee this week is GDP data for the final quarter of 2018, which is due out on Wednesday at 13.00 GMT and forecast to reveal a deceleration of Indian growth toward year-end.

Consensus is for the economy to have grown at an annualised pace of 6.9% in the final quarter, down from 7.1% previously. If the actual result is in line with consensus then India will have remained the fastest growing emerging market.

The other main release is the manufacturing PMI for February, due out on Friday at 06.00, which is forecast to dip to frrom 53.9 previously to 53.5 this month. These numbers are both still consistent with growth in sector output but if the actual result is meaningfully lower than markets expect, then the Rupee could be hurt.

The Rupee has a strong negative correlation with oil prices so is senstive to changes in them. This means productions cuts planned by the Organization of Oil Exporting Countries (OPEC) and other market developments are important for the Rupee outlook.

OPEC is set to reduce oil production from across the bloc by 1.2 mn barrels per day for the first six months of 2019, following an agreement struck between member countries and Russia in December last year.

That boosted oil prices in late December and early January, although U.S. sanctions against Iran and Venezuela have also stoked fears of a possibly dearth of supply later in the year, supporting market prices over recent weeks.

India has to import almost all of the oil it uses so higher prices mean more Rupees have to be sold on international markets to pay for imports. This can often mean widening trade and current account deficits, which would be negative fundamentals for all currencies.

Brexit focus returns to Westminster this week with the Prime Minister due to make a statement in Parliament on Tuesday and an amendable motion on Brexit is up for debate on Wednesday.

The amendment to look out for is the Cooper/Letwin amendment which if passed (and a linked Bill adopted), would result in the government being directed to request an extension to the Article 50 process, should it not get a deal through Parliament by 13 March.

For Sterling such a bill makes a 'no deal' Brexit less likely on March 29, and therefore its passage would be seen as a positive for the currency.

However, a similar amendment by Cooper failed in January so parliamentarians might still be erring on the side of allowing May the freedom to get concessions from the EU before voting for such an amendment.

Last week Chancellor of the Exchequer Philip Hammond said there was the chance the second, and final, Meaningful Vote on the deal itself might actually take place this week; for this to happen some kind of concessions will need to have been secured from Brussels.

Indeed, it looks like these concessions won't be forthcoming in time for a vote this week and May has told journalists during a flight to a summit in Egypt on Sunday that she intends to hold a Meaningful Vote on the deal by March 12, just 17 days before Brexit.

“If the prime minister, Theresa May, manages to secure legal assurances from the EU on the Irish backstop, there will likely be a meaningful vote on the revised deal. But if UK-EU negotiations have not been completed by then, MPs could simply vote on an amendable motion on how to proceed next with Brexit. The latter carries the risk of Parliament voting to take control of the Brexit process, possibly forcing the government to extend Article 50, if Mrs. May has nothing to show from the latest round of talks with Brussels. Either way, the pound appears to be headed for more volatility.” Says Raffi Boyadjian, a currency analyst at XM.com.

Another key release for the UK currency, is the IHS Markit Manufacturing PMI for February, which is a survey-based activity indicator. This is out at 10.30 GMT on Friday and is forecast to show a drop to 52.0 from 52.8 in the previous month of January. PMI's are important leading indicators for the economy.

The Gfk Consumer Confidence survey is out at 1.01 early on Thursday morning and is forecast to show a -15 result from -14 previously - mainly as the mood sours over Brexit. An even sharper-than-predicted fall in the Gfk could well have negative repercussions for Sterling since declines in sentiment indicators often precede falls in the real economy.