- Services PMI surprises on upside in August after others disappoint.

- Suggests growth of 0.4% has been maintained so far in third-quarter.

- But the Brexit negotiations are front and centre for GBP from hereon.

Pound Sterling is seen under notable pressure as we move through the London mid-week session.

The currency shrugged off a solid piece of good economic news concerning the UK's dominant service sector confirming sentiment towards the currency is primarily being driven by Brexit-related sentiment.

Nevertheless, a resillient economy as evidenced by the all-important services PMI - which rose from 53.5 to 54.3 during the month of August - should provide at least some downside protection.

Markets had looked for it to edge higher to only 53.9, drawing a line under a series of disappointing UK economic figures released this week.

Business activity picked up in August, supported by an increase in new work orders, although optimism about to outlook for the 12 months ahead declined in light of the UK's looming departure from the European Union in six months time.

Companies cited uncertainty about the impact Brexit will have on business operations as having prompted them to hold back spending in August. Yet backlogs of unfinished work rose for the fourth consecutive month, something respondents attributed to difficulties recruiting suitably skilled workers.

"The improvement in August’s Markit/CIPS report on services came as a bit of a relief after the recent run of poor data on the economy and suggested that the services sector is holding up better than the industrial sector," says Ruth Gregory, a UK economist at Capital Economics. "Combining the services survey with its sister reports on manufacturing and construction suggests that overall economic growth held steady at 0.4% or so."

Markets care about the PMIs because, covering the UK's three largest sectors, they are an important indicator of momentum within the economy. Economic growth has direct bearing on the rate of inflation and it is consumer price pressures that dictate where interest rates will go next.

"When the Bank of England chose to increase interest rates last month it pinned the decision on the belief that the economy had recovered from a slowdown in early 2018. Today’s results will have the MPC breathing a huge sigh of relief," says Lee McDarby, a managing director at Moneycorp. "Such is the significance of the services industry for the UK economy that strong growth in services can override the poor performance of the other sectors."

Thursday's data follows closely behind similar surveys of the construction and manufacturing sectors, both of which disappointed against market expectations and have prompted a more cautious stance toward Sterling from currency traders. The IHS manufacturing PMI slid from 53.8 to 52.8 in August when markets had looked for it to edge higher to 53.9 while the construction PMI fell from 55.8 to 52.9, more than reversing July's gain. 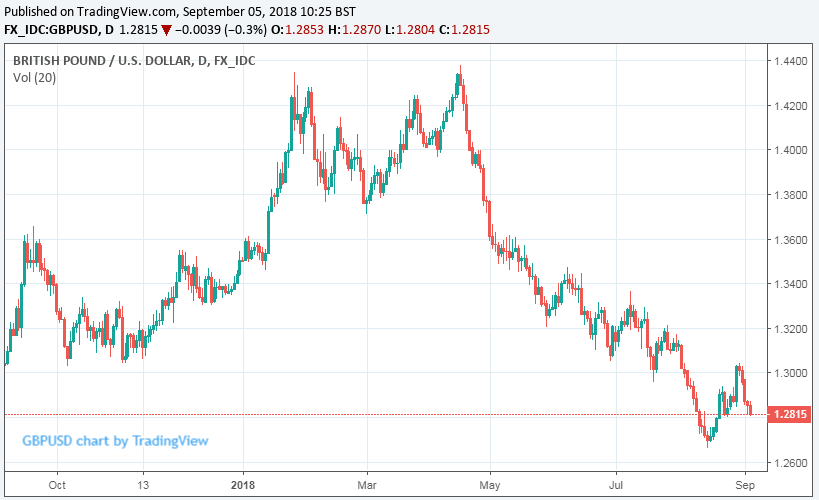 The Pound was quoted 0.30% lower at 1.2818 against the Dollar following the release after extending an earlier 0.21% loss, while the Pound-to-Euro rate was 0.14% lower at 1.1080. Sterling was also lower against all other developed world currencies Wednesday morning. 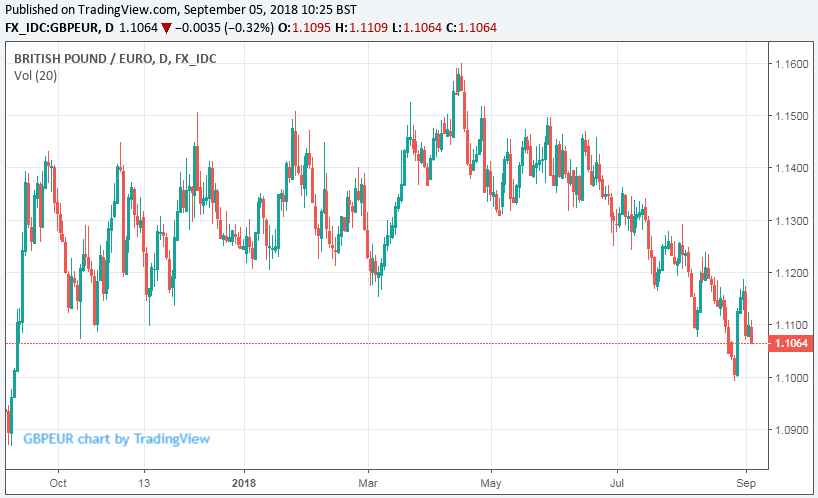 Sterling has lost ground to around half of the G10 basket as concerns about the trajectory of the Brexit negotiations have mounted while global financial markets have become a less hospitable place for risk-sensitive assets in view of President Donald Trump's "trade war".

"We think the stream of news over the next month will be broadly GBP negative as a divisive UK parliament squabbles over what the best Brexit policy approach should be. The difficulty of forging an ‘all for one and one for all’ Brexit strategy will see question marks over PM May’s leadership persist in the near-term – with this negative sentiment being reflected in the price of GBP," says Viraj Patel, an FX strategist at ING Group.

Patel advocates waiting for the Pound-to-Euro rate to decline back toward the 1.0858 to 1.0960 level before buying, in anticipation of a steady but steep increase over the coming months, which would come if the Brexit negotiations eventually lead toward a deal that is acceptable to both the UK and EU as well as both sides of the governing Conservative Party.

"We advise GBP investors to remain nimble with their positions; we’ve argued that chasing GBP much lower from these levels is unattractive from a risk-reward perspective and we see greater opportunities to the upside – with a cheap and heavily shorted pound staying much more sensitive to positive Brexit headlines," Patel writes, in a recent note to clients. "We continue to see value in staying tactically short EUR/GBP above 0.90 (look for 0.9150-0.9200 as an optimal entry point), while we would recommend buying GBP/USD on dips below 1.27-1.28."

With the Bank of England having raised interest rates twice inside the last nine months and markets not anticipating another move until well into the 2019 year at the earliest, the Brexit negotiations will be the foremost driver of Pound Sterling over the coming months.

Prime Minister Theresa May and her team have until some time in November to agree the terms of the UK's withdrawal from the bloc as well as the outline of future trade relations if an accord is to be approved by the European Council and ratified in all parliaments across the EU before the UK's March 29 exit date.

Disagreement over how to manage the Northern Irish border remains the most significant impediment to a withdrawal deal being struck. Fears are that PM May will have to make further concessions to the EU before Brussels becomes willing to declare itself satisfied with the withdrawal negotiations.

Such concessions would merely add to existing domestic political pressures, given the spate of government resignations sparked by the PM's "Chequers Plan", and could give rise to a period of renewed weakness for Sterling.

Bank of England Governor Mark Carney has confirmed he is seriously considering extending his term as Governor in order to oversee a smooth Brexit transition and an announcement on the matter will be made in due course.

The comments were made at an appearance before UK lawmakers where the central bank governor also confirmed the UK economy's current growth trajectory is consistent with the forecasts held at the Bank.

The developments prove support to Pound Sterling which suffered a torrid start to the week amidst a fresh bout of Brexit-related fears as well as concerns the UK economy might be slowing down once more following the release of two under-par economic data releases.

"The lawmaker committee certainly did not shy away from asking tough questions of Carney and his colleagues as the session was unsurprisingly dominated by Brexit, but the trio of Central Bankers highlighted that no-deal Brexit risks are yet to have any material impact on the economy just yet, which has helped Sterling to realise some upside potential," says Felix Blom, currency analyst at OFX.

Carney told the Committee that we could see positive momentum for GBP if there is a Brexit deal, warning too that GBP would move in opposite direction if no deal was achiweved.