The Pound weakened further on Thursday after official data revealed a surprise contraction in UK retail sales during the June month.

Retail sales fell 0.5% in June, partially reversing the 1.3% increase seen in May, when economists had looked for consumer spending to rise by 0.1%.

Office for National Statistics staff attribute the decline to a fall in non-food store spending, which more than offset an increase in food spending associated with the football world cup. However, and on a more positive note, the June numbers follow a two month period of strong growth for UK retailers.

This saw the quarterly growth rate rise to 2.1% for the three months to the end of June, its highest level since the period ending in February 2015 accprding to the ONS. Others say the three-month increase is even more notable.

"Although June’s retail sales figures were weaker than expected, over Q2 as a whole, sales still managed to post the strongest quarterly rise since 2004," says Ruth Gregory, a senior economist at Capital Economics. "Since retail sales account for a fifth of GDP, this could add as much as 0.4pp to Q2 GDP growth."

Gregory places more emphasis on the three month numbers than on figures for June alone but acknowledges the GDP boost from the data is unlikely to be as large as 0.4% given other data have pointed to subdued spending off the high street of late. Nonetheless, her and the Capital Economics team are still forecasting a Bank of England (BoE) rate hike in August.

"Retail sales always looked likely to fall back in June, following hefty increases in volumes of 1.8% and 1.4% in April and May, respectively. Sales volumes still leapt by 2.1% quarter-on-quarter in Q2, so June’s data don’t undermine the MPC’s judgement that the economy rebounded in Q2," chimes Samuel Tombs, chief UK economist at Pantheon Macroeconomics. "We continue to think that retail sales volumes will rise only gradually in the second half of this year."

Tombs is also confident the BoE will raise its interest rate in August but says this, combined with an anticipated slowdown in employment growth and stagnating house prices, will harm household finances and dent consumer confidence. The upshot of that is likely to be even slower growth later this year, according to Tombs. 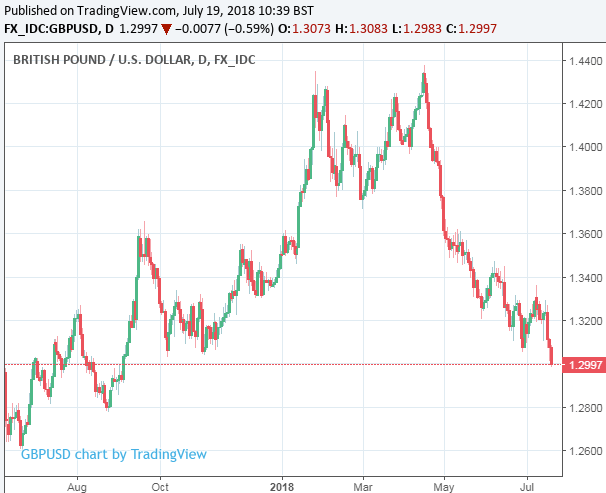 The Pound was quoted 0.56% lower at 1.3002 against the Dollar following the release, although some of this move was likely the result of broad strength in the US Dollar, while the Pound-to-Euro rate was marked down 0.28% at 1.1199. Sterling was also a fraction lower against most other developed world currencies. 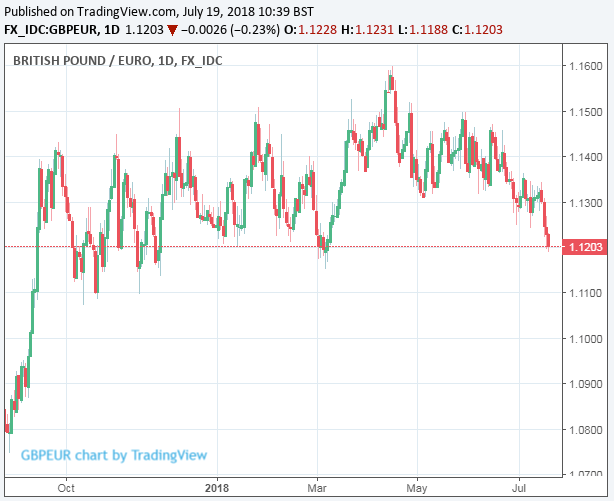 "The BoE’s policy decision has become more finely balanced following the release yesterday of the weaker than expected UK CPI report for June. The report revealed that underlying inflation pressures continued to ease. It provides further evidence that the inflationary impact from the weaker pound has been fading more quickly than expected, which has already been acknowledged at recent BoE policy meetings. Taken in combination with the recent softening of wage growth, there is a higher risk now that the BoE may not raise rates in August," says Lee Hardman, a currency analyst at MUFG.

Thursday's data comes after inflation figures released Wednesday showed consumer price pressures retreating further during June, which appeared to hammer a final nail into the proverbial cofin of an August rate hike. Hardman and the MUFG team say an August rate rise is still "more likely than not", much like Capital Economics and Pantheon Macroeconomics.

The data also follows a three month period of losses that have seen Sterling convert a 4% gain over the Dollar into a 1% 2018 loss while the Pound-to-Euro rate has fallen so that a 2.5% gain has become a mere 1% profit for the year to date. The 2018 decline in inflation has been at the heart of this depreciation.

Sterling had performed strongly between February and April as the consumer price index remained close to 3% and the Bank of England warned it would raise interest rates faster and further than markets gave it credit for if the inflation picture evolved in line with its forecasts.

The BoE predicted back then that inflation would remain above the 2% target until at least the end of the first quarter 2021. However, the consumer price index fell from 3% in February to 2.4% in April and held at this reduced level for May and June. Many economists also expect it to fall further during the quarters ahead.

This and a first-quarter economic slowdown led the BoE to abandon the idea of a May interest rate rise, which has further weighed on the Pound, leaving markets looking to the August meeting for the next possible rate hike. But Wednesday's inflation data have made forecasting the BoE's likely decision in August all but impossible.

"The pound could weaken sharply if the BoE does not deliver. Downside risks for the pound and UK rate hike expectations from the August meeting are particularly pronounced as heightened political and Brexit uncertainty later this year will likely rule out a hike for the rest of this year if the BoE passes up on the opportunity to hike in August.
We still believe that a hike in August is more likely than not," says MUFG's Hardman.

The overnight index swap implied interest rate for August 02 was just 0.63% Thursday, which is just more than half way toward the 0.75% rate that would prevail if the BoE did go ahead and raise rates again next month. This suggests only a small probability the BoE raises rates at that meeting.

This is a deterioration from the situation that existed at the beginning of April, when the implied probability of a rate hike having been announced by the August 02 Bank of England meeting was more than 80%, and suggests markets are not entirely sure the Bank will pull the trigger next month.