- Odds of BoE rate hike in August are now lower. 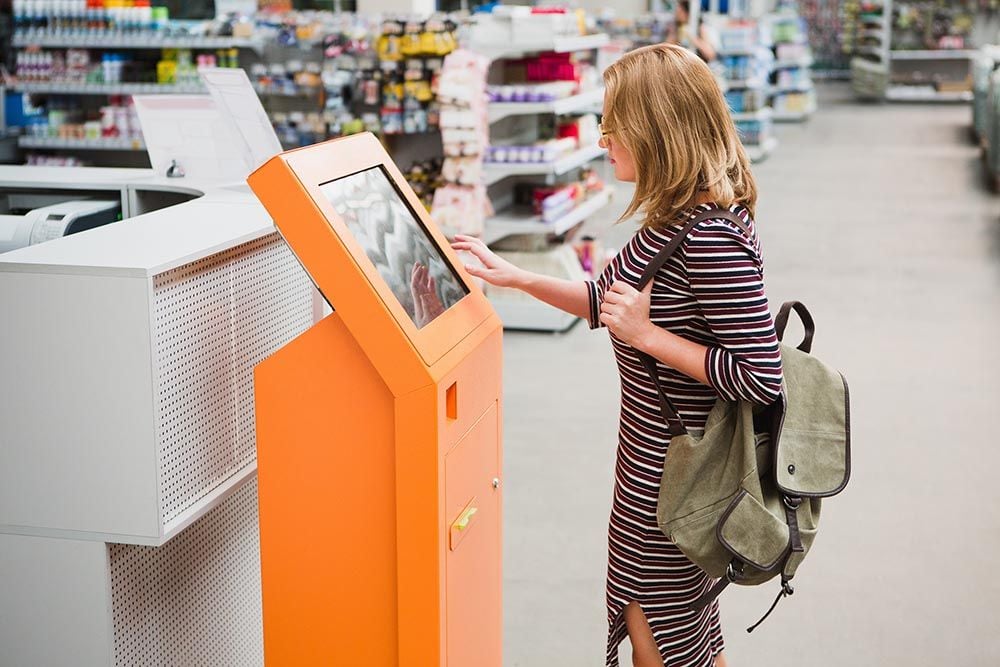 Pound Sterling's poor performance was exacerbated mid-week after official data showed UK inflation surprising on the donwside in June, prompting fresh questions about whether the Bank of England will be able to raise its interest rate in August.

UK inflation held steady at 2.4% in June when economists had been looking for the consumer price index to rise to 2.6%, given a double-digit increase in oil prices this year, which has raised the cost of fuel and energy.

Core inflation, which removes volatile food and energy items from the goods basket and so is seen as a more reliable measure of domestically generated inflation pressures, also posted a surprise fall when it dropped from 2.1% to 1.9%.

The Office for National Statistics says that while rising energy and transport prices exerted notable upward pressure on the rate of inflation last month, this was countered by falling prices for clothing, games, children's toys and hobbies items. 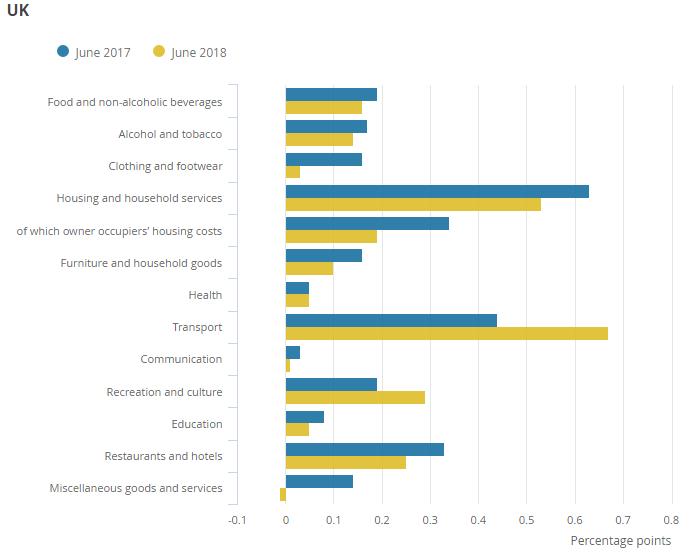 "We already knew that the recent rises in utility and fuel prices would add about 0.2pps to CPI inflation in June. We had thought that this would push overall inflation up. But in fact, this was offset by a small fall in the core rate (which excludes food and energy) from 2.1% to 1.9%, largely driven by a fall in clothing inflation," says Ruth Gregory, a senior UK economist at Capital Economics.

Markets care about inflation because it has implications for interest rates. Changes in interest rates, or hints of them being in the cards, are only made in response to movements in inflation but impact currencies because of the push and pull influence they have on international capital flows and their allure for short-term speculators.

"If we are right in thinking that oil prices will fall back later this year, then input price inflation is unlikely to remain this high for long. And CPI inflation looks set to resume its downwards later this year, as the inflationary impact of sterling’s fall continues to fade. On the face of it, then, the figures perhaps reduce the chances of a rate hike in August," Gregory adds. 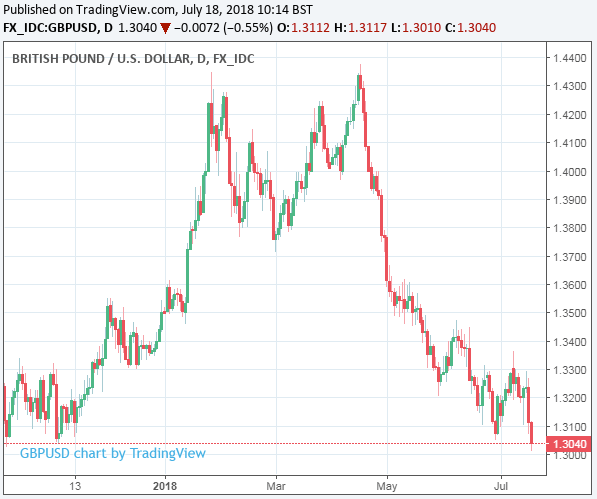 The Pound-to-Dollar rate was quoted 0.62% lower at 1.3024 following the release, after deepening an earlier 0.2% loss, while the Pound-to-Euro rate was marked down 0.28% at 1.1208. Sterling was also lower against all other developed world currencies.

"Weak CPI data is pushing the Pound lower. BoE rate hike expectations will be pared back for August no doubt, especially given political uncertainty. Even with a net vote in favour of a hike, we are likely to see a one and done," says Neil Jones, head of corporates and financial institutions at Mizuho Bank. 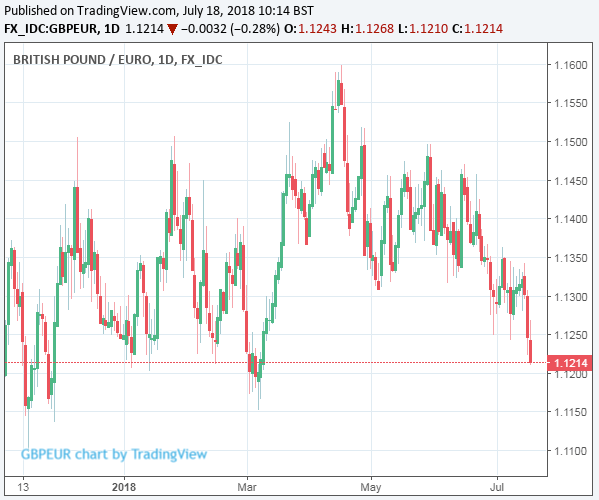 Bank of England in Focus

Bank of England officials, as well as many economists, have said repeatedly this year the central bank should go ahead and raise its interest rate because an anticipated pickup in wage growth will compound the effect that rising energy prices are likely to have on the consumer price index.

As it turns out, the rate of inflation has fallen precipitously, dropping from 3% in January to 2.4% in May. And Office for National Statistics data showed on Tuesday that wage pressures are not nearly as strong as many had previously thought.

This matters for Sterling because the currency has been hit hard by events on the inflation front in recent months.

"The boost to inflation from import-sensitive sectors is continuing to fade much more quickly than the MPC expects," says Samuel Tombs, chief UK economist at Pantheon Macroeconomics. "CPI inflation likely will hold steady again in July, because three more of the largest 12 energy suppliers have hiked prices, but it should resume its descent thereafter and hit the 2% target by the end of this year."

The Pound had enjoyed considerable gains at the start of the year after the BoE warned it would raise interest rates faster than the market gave credit for if the inflation picture evolved in line with its February forecasts, only to be left badly damaged when consumer prices went into retreat.

Odds of an August Hike are Reducing

The BoE forecast the consumer price index would remain above the 2% target until the end of the first-quarter 2021, leading markets to bet the bank would raise interest rates in May and once more toward the end of the year, although the subsequent decline in prices scuppered the May rate rise.

Since then markets have resorted to hoping an interest rate rise might come in August, with the case for one hinged largely on the idea that rising energy prices and wage pressures will push the consumer price index into a renewed uptrend later this year. Wednesday's data contradicts this argument and so has added further to Sterling's woes.

The outlook for Sterling and UK interest rates is also clouded by political uncertainty given the BoE has said repeatedly its forecasts are contingent on a smooth and orderly Brexit process, as well as a rejuvination of UK inflation expectations.

Pricing in interest rate derivatives markets currently implies an August 02 Bank Rate of 0.64%, which is just more than half way toward the 0.75% rate that would prevail if the BoE did go ahead and raise rates again next month.

This is a deterioration from the situation that existed at the beginning of April, when the implied probability of a rate hike having been announced by the August 02 Bank of England meeting was more than 80%, and suggests markets are not entirely sure the Bank will pull the trigger next month.

But Cathal Kennedy, European Economist with RBC Capital Markets, says the Bank might be willing to look through the data disappointment.

The release, "though surprising to the downside relative to the market expectations, still leaves CPI for Q2 averaging 2.4% y/y, i.e. still above target and what the Bank forecast at the time of the May Inflation Report," says Kennedy.

"We don’t think that this single data point is sufficient to derail an August rate increase. Rather the MPC is instead likely to focus on yesterday’s labour market numbers showing unemployment at record lows and vacancies at record highs as evidence that the slack in the UK labour market is exhausted and a rate increase is thus warranted," adds Kennedy.