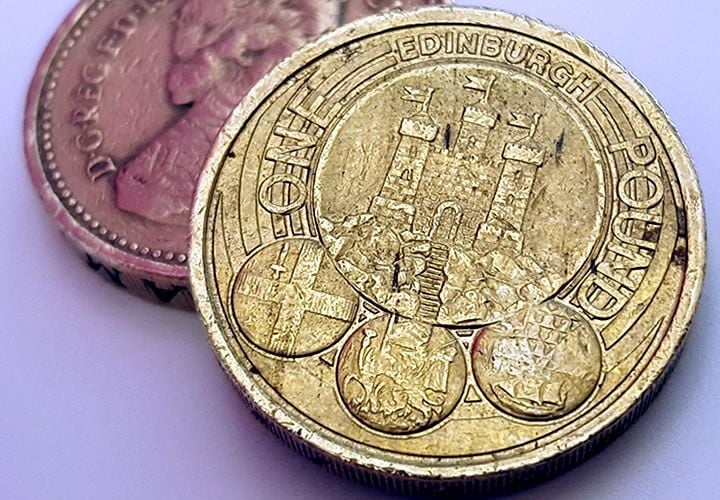 Pushing the Euro higher against the British Pound amounts to "pushing a stone up a hill" - Kit Juckes, Société Générale.

The Pound now buys 1.1153 Euros on the inter-bank market, this purchasing power is down from 1.14 seen in early November and equates to levels last seen on October 20.

Pushing the Euro higher against the British Pound would amount to "pushing a stone up a hill" says long-time City foreign exchange analyst Kit Juckes of Société Générale.

In short The important point for readers looking for clues as to where the Pound will go next against the Euro to take note of is that the EUR/GBP exchange rate traditionally follows this interest rate differential.

Just take a look at the below: 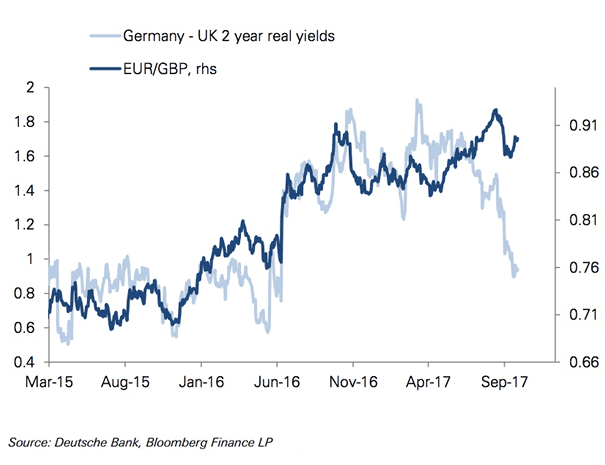 The above image from Deutsche Bank confirms the linkage between the EUR/GBP exchange rate and the spread between German and UK bonds. German yields are lower than UK yields, this in turn sees investor cash flow from Germany to the UK, supporting the Pound in the process.

However, the recent dislocation has economists at Deutsche Bank describing the Pound as cheap, something Juckes concurs with.

“The level of relative rates at the front end of the curve is very strongly tilted in Sterling’s favour, and while I don’t think that matters much, it does mean that pushing EUR/GBP up is a bit like pushing a stone up a hill,” says Juckes.

“Not the full Sisyphean ‘push it up and then get flattened when it rolls back down’ metaphor but hard work all the same,” Juckes adds.

In short, Juckes is not suggesting Sterling is undervalued and therefore due a strong rebound against the Euro, rather it looks incredibly difficult to justify substantial declines in the Pound-to-Euro exchange rate based on the above observations.

This financial dynamic might help to place a floor beneath the Pound during the coming weeks, which are set to see investors’ appetites for Sterling tested by additional rounds of Brexit talks and a December deadline for “sufficient progress” that looms ever closer.

"The pullback in GBPEUR has been intense on Tuesday, though when taking a step back, the picture is decidedly less threatening, if not encouraging,” says Joel Kruger, a currency strategist at LMAX Exchange.

The Pound-to-Euro rate was quoted 0.70% lower at 1.1167 at the London close Tuesday after being forced lower by a resurgent Euro and poorer than expected macroeconomic data emerging from the UK.

“For the moment, we view the pullback as nothing more than a minor period of weakness within a choppy consolidation likely to remain confined to the 1.1100-1.1400 area,” adds Kruger.

UK consumer price growth stalled to a halt at 3% for the month of October, according to Office for National Statistics figures, when it had been expected to rise 10 basis points to 3.1%.

“There is clear evidence of a meaningful base in place from earlier this year, down around 1.0750, which suggests the current round of setbacks should be very well supported ahead of 1.1000 in favor of a higher low and bullish continuation," Kruger concludes.

Tuesday’s inflation data could have implications for Bank of England monetary policy and served, on the day, to take some air out of the argument for further interest rate hikes in the short term.

“EUR/GBP has eroded the short term downtrend and rallied to 0.8920, the 55 day moving average. This should act as the break up point to the .9034 12th October 2017 high, where we suspect that it will struggle,” says Karen Jones, a technical analyst at Commerzbank.

The 0.9034 Euro-to-Pound level, where Jones forecasts the Euro will meet with heavy resistance, works out to a Pound-to-Euro exchange rate of 1.1069.

This is less than 100 points away from the 1.1150 Pound-to-Euro rate seen around the London close Tuesday, which could suggest that further downside for the exchange rate will remain limited.