Pound Sterling has on carried its positive momentum into the new month thanks to comments from two senior Government ministers regarding the UK's future relationship with the European Union's single market.

The UK Government will consider paying for unfettered access to the EU's single market it has been confirmed.

The Secretar for Exiting the European Union, David Davis, told MPs that ministers want to "get the best possible access for goods and services to the European market".

During questions in the House of Commons, Labour MP Wayne David asked if the Brexit secretary would “consider making any contribution in any shape or form for access to the single market”.

Davis responded, “the major criterion here is that we get the best possible access for goods and services to the European market. And if that is included in what he is talking about, then of course we would consider it.”

In reply to my Question, David Davies has stated that govt is prepared to consider 'paying' for access to Single Market. Significant #brexit

This is the first time a Government minister has openly signalled that money could be handed over to Brussels to secure favourable trading terms with the continent.

Davis was soon followed by the Chancellor of the Exchequer, Philip Hammond, who said, "we have to look at any deal in the round, and I think David Davis is absolutely right not to rule out the possibility that we might want to contribute in some way to some form of mechanism."

We assume the Government sees paying as the most valid route to securing single market access while also controlling the UK's borders.

Indeed, the news comes on the day that it is revealed that net migration to the UK is at record-highs, despite many attempts by successive governments to cap the rising migration levels.

The pressure is on the Government to limit immigration just as it is to ensure the economy benefits from a strong relationship with Europe - it looks like a handsome fee will have to be handed over to the gatekeeper.

And this is a needy gatekeeper.

If we look at the below, it is noted that the UK was the third-largest contributor to the EU budget in 2015. Take away the UK's slice and we are left with a European Union with a gaping hole in its budget. 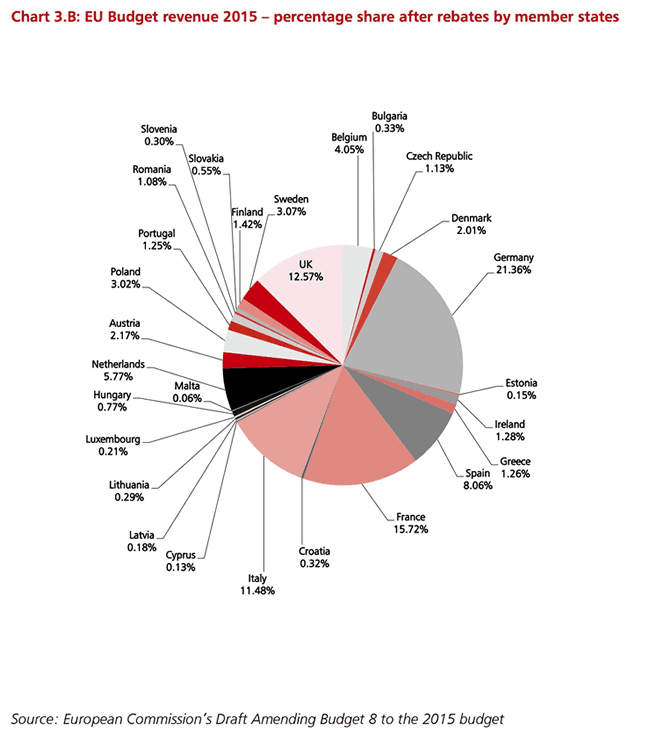 The EU could certainly use the UK's contributions going forward and I believe today's announcement would give the UK a stronger hand heading into negotiations in 2017.

Since October we have seen Sterling make notable moves higher each time the prospect of continued access to the EU single market becomes more assured.

Nearly all analysts are in agreement that the biggest hurdle to Sterling's appreciation and the UK economy's growth trajectory is the uncertainty posed by Brexit.

Davis' comments go a huge way in removing this uncertainty.

"The comments hint that ‘soft’ Brexit preferable to the markets is still possible, and if Davis’ comments bear fruit – then it is likely that the Pound would recover even more. The real question facing markets is where will the pound go next," says Paresh Davdra at RationalFX.

The exuberant start to the new month for Sterling comes after the sharp jump that characterised the final day’s trade in November.

"November proved to be a grand month of gains for the pound. Not since 2009 has sterling seen as many spikes in one month. Surging further 0.5% against the euro even on the last day of November – largely owing to OPEC’s shock agreement on global oil output freeze that left markets flummoxed," says Davdra.

We reported that the strength came on the back of a rise in UK Gilt yields which are tracking the yields on their counterpart US Treasuries higher.

The so-called Trump trade therefore remains with us and could lead to further gains.

The Trump-trade essentially sees UK and US bond yields rise in anticipation of higher inflationary pressures over coming years thanks largely to expectations for a massive investment drive by Trump.

However, analyst Kit Juckes at Societe Generale in London says he can't help feeling that the resilience of the pound in November is almost entirely down to the weight of short positions at the start of the month, which are now significantly reduced.

“The most likely outcome is that volatility continues to fall and the pound drifts in a range against the dollar, with EUR/GBP reflecting the European political mood, which in turn gives GBP/USD a bearish bias overall,” says Juckes.

So perhaps we will see strength fade.

Indeed, a number of analysts confirm this will be the case as 2017 will see Sterling fall back towards October lows.