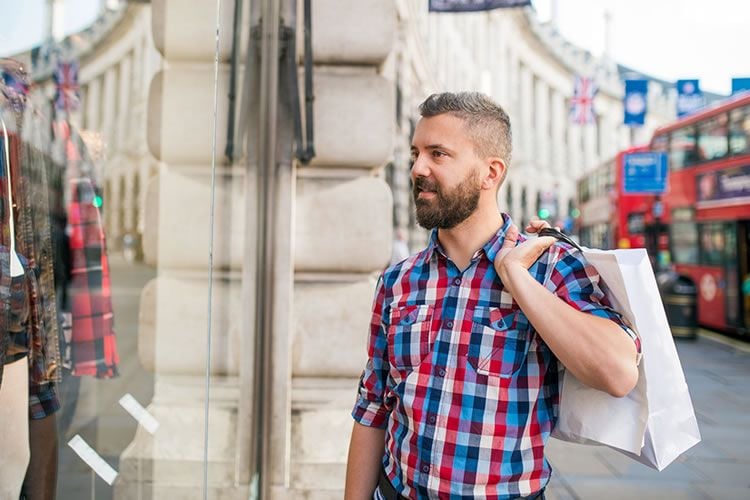 GBP is advanced in the wake of the release of notably better-than-forecast UK retail sales data from the ONS.

Headline monthly retail sales for October rose 1.9%, easily outstripping estimates for a reading of just 0.4% growth which represents the best reading for the sector in 14 years.

The previous month's reading was 0.1%.

The UK consumer is absolutely undaunted by the prospect of Brexit and because the UK is so heavily biased towards the services sector the data should keep the economy growing as we move forward into Brexit negotiations which are likely to start in the first half of 2017.

But, this reading could be as good as it gets according to analyst Paul Hollingsworth at Capital Economics who reckons high-street spending will fail to maintain this pace going forward:

"After all, this week’s labour market figures highlighted that wage growth remains weak. Moreover, despite the slight dip in inflation in October, it still looks set to breach the MPC’s 2% inflation target in spring next year, and will end the year closer to 3%. Accordingly, the squeeze in real income growth is yet to come."

The lacklustre response by Sterling to the previous day's labour market data suggested to us that moves in response to the retail sales figures would be limited but it is hard to ignore such a strong reading.

The gains in Sterling following the retail sales release, while evident, are not exceptional and if these were normal times we believe the currency would be rocketing.

But these are not normal times and sentiment related to Brexit remains key for the UK currency.

Economic data aside, the UK currency will remain largely at the mercy of sentiment and politics.

The ongoing Brexit discussion remains the key risk in this regard.

The nature of a post-Brexit relationship between the EU and UK is absolutely key to the economy’s future, and thus Sterling valuation.

One of the big worries for Sterling, since the October Conservative Party conference, is that the UK would seek a hard-Brexit.

This is where the UK sacrifices access to the single market in order to ensure full sovereignty of issues such as immigration and external trade deals.

Goldman Sachs believe the fall-out from such a Brexit will be extensive and because they see this scenario playing out they maintain a year-end target for GBP/USD of 1.20 and for EUR/GBP of 0.90, or GBP/EUR at 1.10.

A hard-exit is best summed up as a failure by the UK to maintain unfettered access to the single market - and to maintain accesss the UK will have to allow unfettered free movement of EU citizens.

The problem is the UK voted for control of their borders in the EU referendum while also fancying the idea of staying in the single market - something has to give.

We heard on Wednesday November 16 from German Chancellor Angela Merkel that she is open to allowing countries like Britain to curb migration, something she was steadfastly opposed to in the build-up to the EU referendum in June.

"I personally am of the view that we will have to discuss further with the [European] Commission when this freedom of movement applies from."

“The question of when lifelong guarantees come into effect according to the social standard of the host country must certainly be taken into consideration."

Offering "fair" negotiations to the UK, Merkel added: "First, however, Britain must explain in what manner it would like this exit."

And here lies the rub - this week the UK Government was rocked by a leaked memom that accused leaders of not knowing what kind of future releationship they would like to achieve amidst divisions amongst the Conservative party hampering progress.

Boris Johnson is one of those looking to control immigration while maintaining open trading relationships. In an interview with a Czech newspaper on Tuesday, Boris Johnson, the Foreign Secretary said:

“Everybody now has it in their head that every human being has some fundamental God-given right to move wherever they want. It’s not true. That was never the case. That was never a founding principle of the EU. Total myth.”

So can the UK have its cake and eat it? It would certainly appear that this is more possible now than it has been for some time.

“We believe that Trump’s victory has cornered the European parties that have sought to make Brexit as painful as possible for the UK and thereby raised the odds of the UK and EU reaching a favourable Brexit deal that mostly preserves the economic status quo,” says Steven Gallo at BMO Capital.

Gallo and his team have turned more optimistic on the Pound’s outlook against the Euro as a result of this evolution in the Brexit story.

Pound Weakness was too Extreme

The UK currency was heavily oversold following October's bout of weakness which saw it fall below most fair-value estimates as markets fretted over a new theme called hard-Brexit.

Markets have since realised that this opaque threat known as hard-Brexit is just too wishy-washy and hard to define to justify the UK currency trading at grossly undervalued levels.

"Our view that Pound weakness during October was mainly sentiment driven which became excessively bearish towards the Pound driven by hard-Brexit fears, and was not fully justified by the UK’s fundamentals. We continue to believe that the bulk of the adjustment lower for the Pound is now complete," say analysts at Nomura.

Nomura believe Sterling can rise to 1.30 against the US Dollar and 1.19 against the Pound before settling back into recent ranges.

The bounce leading into and following the Trump victory has seen GBP become more fairly valued and the rally now looks to be fading.

"We have the impression that the recent Sterling comeback is losing some momentum," says Austin Hughes at KBC Markets in Dublin. "A sustained break below the recent highs against the Euro or the Dollar doesn’t look that evident."

Hughes notes the decline of EUR/USD also weighed on EUR/GBP. EUR/GBP dropped below the 0.8725 previous top.

While this makes the short-term picture more Sterling friendly KBC Markets are not convinced on the sustainability of the GBP rebound.

"However, for now, we stay side-lined as long as the decline of EUR/USD weighs on EUR/GBP," says Hughes.

The US Dollar remains the currency to beat at the moment.

This is understandable considering we are in a bit of a purple patch for the USD at present - expectations for a steeper path of US Federal Reserve interest rate hikes since the Trump victory have ensured the Dollar remains the stand-out performer in global foreign exchange.