Gains come despite a broader malaise on global markets, conditions which are typically unhelpful for the Pound and suggests some improvement in investor sentiment towards the UK.

The turning point in Sterling's fortunes follow a decision by the Bank of England to intervene in bond markets that had become disorderly after investors reacted negatively to the string of tax cuts announced by the UK government last Friday.

A section of the UK pension industry were said to have been facing significant difficult following a surge in long-dated UK bond yields, with many said to be facing liquidation.

The Bank's intervention proved effective, prompting a rally in long-term bonds and a drop in their yields.

"The Bank of England’s offer to stem the rout in UK bond markets till mid-October has helped to put a tentative floor under the pound," says analyst Joe Manimbo at Convera. 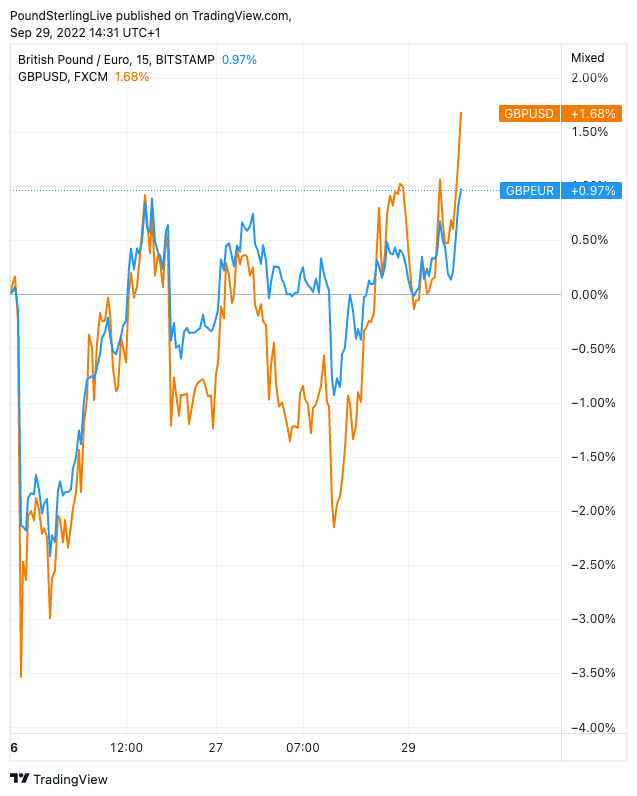 Above: Change in GBP/EUR (blue) and GBP/USD (orange) since this week's open. To time your FX payments consider setting a free FX rate alert.

"The BoE’s decision yesterday to step back into the UK Gilt market at the long end of the curve to protect financial stability in the UK has certainly upped the level of concern over the potential negative economic and financial market fallout from the loss of confidence in UK’s public finances," says Lee Hardman, Currency Analyst at MUFG.

"The pound isn’t out of the woods since the government shows no signs of abandoning a growth plan that threatens to worsen the highest inflation among major economies, while the likelihood of larger BOE rate hikes to rein in inflation would make borrowing and spending more expensive, a challenging backdrop for growth," says Manimbo.

But renowned economist and nobel laureate Paul Krugman said there was now a need for calm, suggesting investors and analysts were at risk of over exagerrating the scale of the problems facing the UK and its currency.

"There seems to be a lot of hyperventilating going on. No, it won't cause a global crisis - for God's sake, Britain is only 3.2% of world GDP. And while British markets are a mess, we're a long way from 1976. Get a grip," said Krugman.

Coming days will be key in ascertaining whether overall sentiment towards the UK has improved or whether Sterling is the beneficiary of month-end flows and an overcrowded market being flushed out.

Near-term volatility is likely to remain intact, although the Bank of England's actions will send a warning shot to investors looking to pile on bets against UK bonds and the Pound.

The Bank said it stands ready to purchase conventional gilts with a residual maturity of more than 20 years in the secondary market, initially at a rate of up to £5BN per auction.

The intervention serves as a reminder "it is futile to fight a central bank in its own currency", says Kallum Pickering, Senior Economist at Berenberg Bank, underscoring the firepower in the hands of the Bank.

"The Bank will carry out temporary purchases of long-dated UK government bonds from 28 September. The purpose of these purchases will be to restore orderly market conditions. The purchases will be carried out on whatever scale is necessary to effect this outcome," said the Bank.

The programme is open ended and without limit, suggesting a 'whatever it takes' attempt from the Bank.

"Gilt yields may be volatile in coming days as the BoE wrestles with market forces to stem selling pressure. But the BoE is the ultimate backer of sterling-denominated paper. Betting against its ability to fix the market disorder – at least in the short term – is futile, in our view," says Pickering.

Above: The yield paid on UK 30-year bonds fell sharply after Bank of England intervention.

For the Pound, the outlook nevertheless remains challenging with trends heavily in favour of further decline.

However, near-term the catalysts for another sharp move lower might be lacking.

Marc Chandler, analyst at Bannockburn FX, explains the mini budget was not a surprise to markets: "Truss had been critical of Sunak's tax increases. She had campaigned in part on reversing them. Most of the tax cuts including in the last week's budget announcement were that."

He further explains the policy mix of fiscal stimulus and monetary tightening pursued by the UK is the same policy mix under Reagan-Volcker when Germany had when the Berlin Wall came down and unification was pursued.

"That policy mix is associated with an appreciating currency, even if not immediately. While some have been very critical of the UK efforts, and it is a gamble, but like a losing trade is an orphan and a winning trade has many parents, so too in politics," says Chandler. "In a favourable turn of event, including lower energy prices and stronger growth, the gamble would pay off."