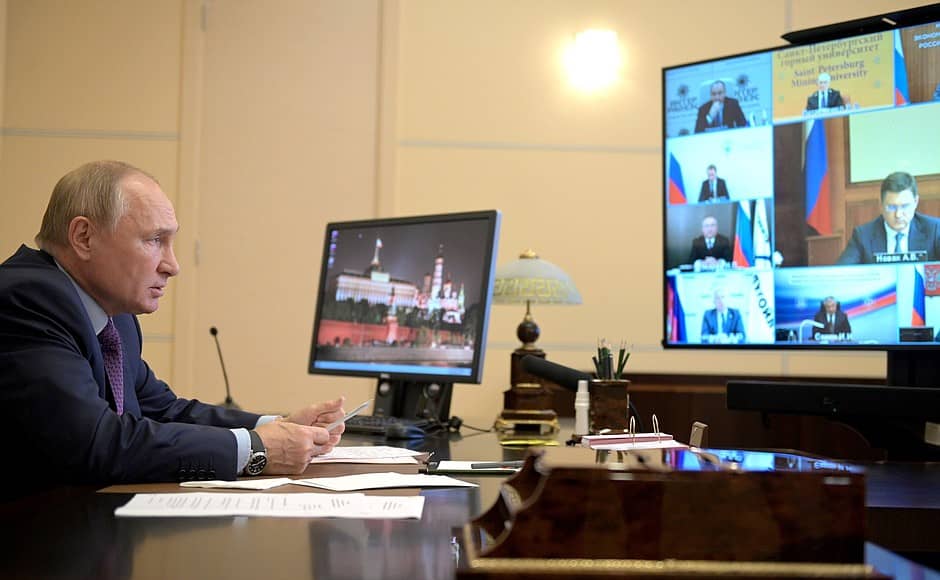 Falling stock markets and surging energy prices create a cocktail of market conditions that are best suited to buying Dollars, at the expense of both the Euro and British Pound.

The Dollar has been ascendent for weeks now and there remains little in the outlook to convince analysts that further gains can not be achieved over coming days, particularly as fears of surging inflation won't subside in the near future. 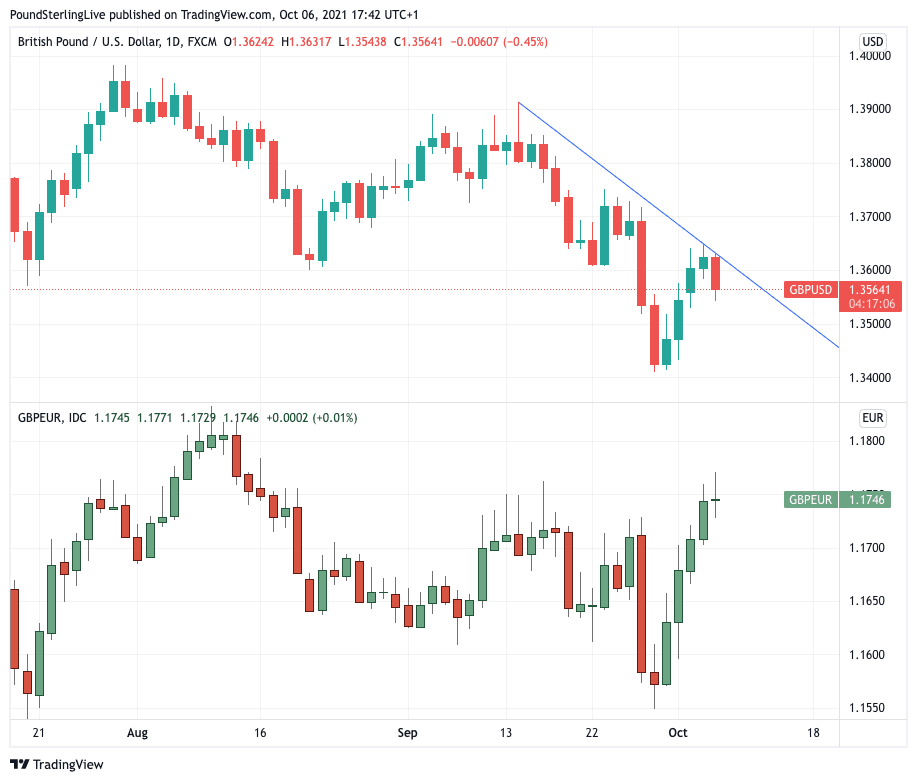 Above: Differing fortunes - the GBP/USD is under pressure (top) while GBP/EUR's rebound looks more robust.

The reason for the Pound's outperformance of the Euro is that the global energy price surge is proving to be particularly problematic for the Euro.

While UK gas prices have surged to new records they are still not rising as fast as they are in Europe.

Proof of this can be found in that gas traders were seen paying a 30p/therm premium for UK gas at Belgium's Zeebrugge terminal, which is where the UK-Europe gas pipeline lands in Europe.

This premium creates arbitrage opportunities and the market has responded: the UK has actually been exporting gas to Europe, with S&P Platts reporting the market saw "the greatest gas export the UK has ever seen."

This is a crucial finding that has been overlooked by financial commentators and the majority of currency analysts we follow.

The more pervasive narrative amongst economists and institutional strategists is that the UK is more at risk of surging gas prices than European peers.

A case in point is provided by MUFG's Derek Halpenny: "The upside price risks in the UK relative to Europe seem higher to us given the lack of storage and therefore the far greater dependence on other sources of power supply from abroad".

But that the UK is in fact exporting gas to Europe would suggest otherwise.

S&P Platts also says "there are reports that the UK could see a surge in LNG arrivals from October, as a result of hedging behaviour on winter contracts and a purposeful bidding-up to this end."

The situation in Europe therefore does look to be more acute than in the UK and will ultimately only be solved by an increase in Russian gas exports to the region.

Almost on cue was an intervention by Russian President Vladimir Putin on October 06 which appears to have cooled the inflamed gas market and helped the Euro recover its earlier losses against the Dollar and Pound.

According to a Bloomberg report, Russia will now strive to increase gas supplies to Europe, news that promptly sent gas prices sharply lower and saw the Euro recover. 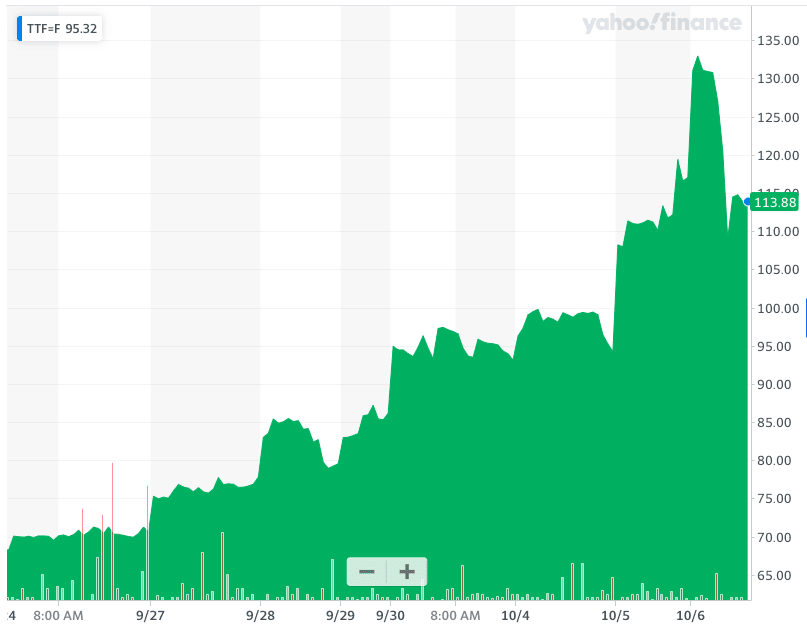 "Surging gas prices which accelerated the sell off on the FTSE 100 were reined in a little after Russia’s president said the country would increase the amount of gas it will send to Ukraine via Europe, over the level it’s currently contracted to do. It underlines the volatility in the market and the nervousness amongst investors about low stockpiles of gas across Europe," says Susannah Streeter, senior investment and markets analyst, Hargreaves Lansdown.

Shahab Jalinoos, Global Head of FX Strategy at Credit Suisse warned two weeks ago that the energy price shock unfolding in Europe had negative implications for both the Euro and Pound against the Dollar.

"This has largely played out, although interestingly even more cleanly for EUR than GBP. We suspect this is linked to the fact that GBP is still supported by the possibility of BoE rate hikes in coming months," says Jalinoos.

For the Pound, what is important is that the market is judging inflation to trend higher in the UK relative to the Eurozone owing to factors other than energy and therefore the Bank of England will hike sooner and faster than the European Central Bank.

This expectation is evidenced in the spike in the yield on UK ten-year gilts: 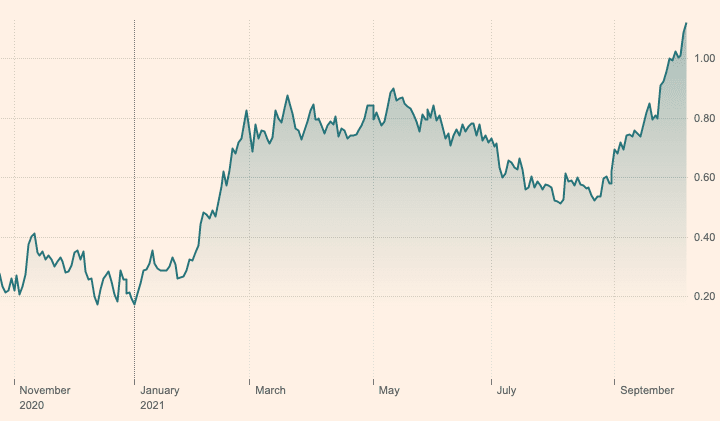 Above: The yield offered by the UK ten-year bond. Image courtesy of FT.com.

The UK government has committed the UK to a "high wage" future with Prime Minister Boris Johnson saying that limits on unskilled migration will force businesses into investing in the productivity of their employees.

Media reports also point to the Government soon announcing another boost to the minimum wage, almost certainly in the Autumn Budget.

"Speculation that he could boost the minimum wage. In the current environment, with UK 10y breakeven rates topping 4% earlier today, and UK gas prices up 60% in two days, an increase in the minimum wage could act to further fuel inflation fears in the UK," says a currency research note from TD Securities.

The prospect of higher-for-longer inflation will ultimately elicit a response from the Bank of England: Higher interest rates at the Bank of England would act as a coolant on inflationary pressures and markets continue to price in a rate hike in either late-2021 or early 2022.

A side effect of higher interest rates is however a stronger Pound, particularly against the likes of the Euro which is unlikely to see any similar interest rate support from the European Central Bank until at least 2023.

Accordingly, the Pound rose to a seven-week high against the Euro.

The Makings of a Gas Crisis

The unprecedented surge in demand for natural gas can be traced back to the rejection of nuclear energy in Japan and Germany.

In a UK energy market briefing, the Department for Business, Energy & Industrial Strategy noted that the decline in UK Liquefied natural gas (LNG) imports from Qatar began in 2011.

The report says this decline was in turn linked to an increase in the price of LNG which was affected by the 2011 Tōhoku earthquake and tsunami that caused the Fukushima disaster.

"LNG was used as an emergency fuel to meet demand. This led to the creation of an LNG spot market in Asia and subsequent changes to the global market structure," says Azin Azarbarzin, author of a note for the Department for Business, Energy & Industrial Strategy in 2019. 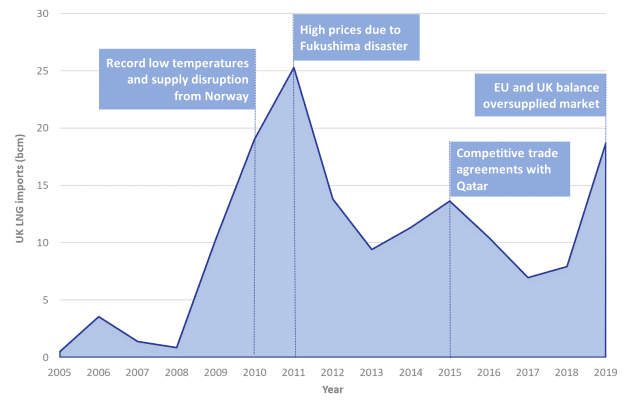 This restructuring of the global gas market triggered by Japan's response to Fukishima persists: 2021's gas price surge is linked to a bidding war between Europe and Asia for any seaborne LNG that might come onto the market.

China is meanwhile about to overtake Japan as Asia's primary gas market as it struggles to secure enough coal to power factories and heat homes this winter.

This has in turn spurred some of the nation's energy providers such as Sinopec to enter the LNG spot market in a more aggressive fashion as authorities look to avoid winter blackouts.

Germany has increased its structural demand for gas following a nuclear 'phase-out' which was triggered in 1998 when the Greens and SPD gained control of the government.

In 2000 Germany's nuclear reactors provided a 29.5% share of the country's electricity supply and this will fall to 0% in 2022 when the phase-out is completed.

Allowing for the gradual transition away from nuclear are green energies (wind, solar), but more significantly, natural gas of which Russia has readily provided.

Russia is now by far the preeminent supplier of gas to Germany and Europe with its importance only growing as nuclear's contribution scales down.

But Russia has squeezed the supply to Europe in 2021: there is speculation that this is to force through the approval of the Nord Stream 2 pipeline, but there is also evidence that Russian production has genuinely been curtailed in 2021 for various reasons.