- GBP showing vulnerabilities
- UK Covid cases doubling every 10 days
- But hospitalisation rates steady
- All adults to be offered vaccine by month-end
- GBP/USD forecast above 1.50 by year-end 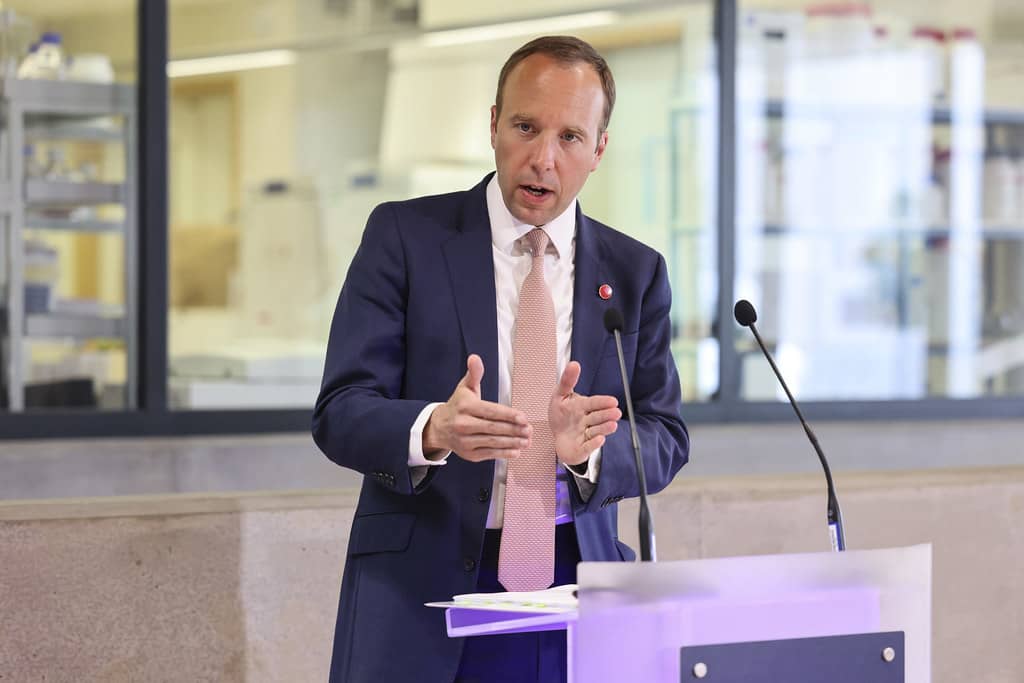 UK Covid-19 cases continue to rise rapidly with cases doubling nearly every ten days according to the latest data, but news that hospitalisations are flat and all adults will be offered a vaccine by month end are limiting any major losses in value for the British Pound.

The Pound is sensitive to the UK economic recovery and the currency's soft start to the new week has been blamed by some analysts on rising investor anxieties over whether or not the final June 21 lifting of restrictions will be lifted.

"A delay to the complete economic unlock by the UK government would be GBP-negative and the pound is already slipping against currency peers as a result," says George Vessey, UK Currency Strategist at Western Union Business Solutions.

The Times reports Tuesday the move to fully unlock could be delayed by two weeks with cabinet ministers increasingly pessimistic after a "downbeat" briefing from the country's most senior medical advisors, Chris Whitty and Sir Patrick Vallance.

The delay would enable all over-50s to be fully vaccinated and leave sufficient time for jabs to take effect before restrictions are lifted.

Uncertainty over whether 'freedom day' will proceed was reflected in a decidedly indecisive Sterling: the Pound-to-Euro exchange rate churned ground between 1.1657 and 1.1610 while the Pound-to-Dollar traded between 1.4185 and 1.4111. 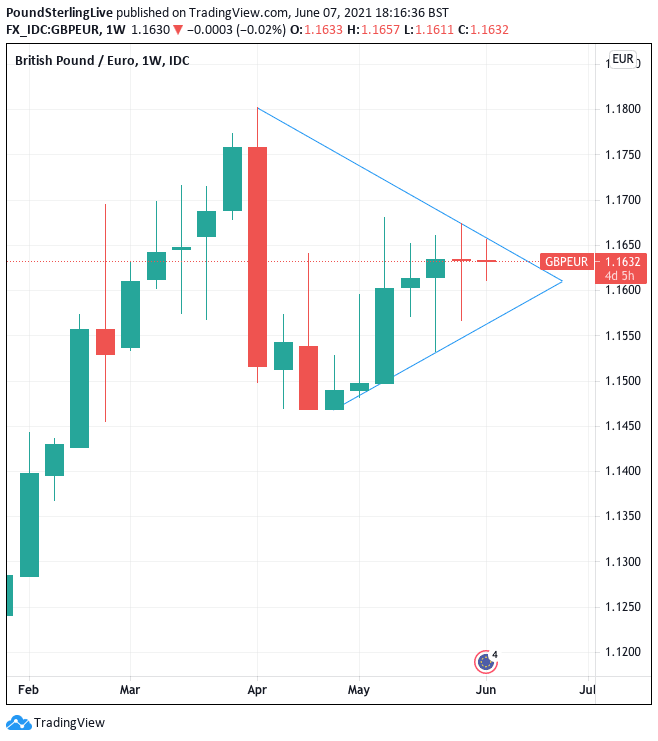 Above: The GBP/EUR mukti dail range is compressing like a coiling spring.

"The UK economy is expected to bounce back strong this year, led by a vaccine-fuelled population unleashing records amounts of savings into the market. However, the government has yet to confirm the so-called final stage of the reopening strategy amid a threat of another wave of infections," says Vessey.

Incoming case data for the UK is unhelpful for Sterling bulls with the country reporting 5683 new cases of Covid-19 on Monday, up from 3383 a week earlier.

The estimated 'r' number for the spread of Covid-19 in the UK is now at 1.47 according to Oliver Johnson, Professor of Information Theory and Director of the Institute for Statistical Science in the School of Mathematics at Bristol University.

"This aspect of the situation is not necessarily developing to our advantage," said Johnson on his Twitter account Monday.

The expectation held by numerous analysts we follow is the Pound will benefit as the UK economy experiences a sharp rebound over coming weeks and months, with a good portion of that rebound fuelled by money saved during the various lockdowns of recent months.

However, analysis of short-term consumer trends by Barclays shows a risk that the rebound could disappoint, particularly if consumer confidence is negatively impacted by rising Covid cases and fears of renewed restrictions.

"Despite the 17 May reopenings, spending appears to have stalled over the second half of May. While improvement may end up being drawn out over the next few weeks, the recent sharp growth in COVID-19 cases could weigh on sentiment," says Fabrice Montagné, Chief UK and Senior European Economist at Barclays.

A deterioration in the data could in turn blunt demand for the Pound say analysts.

"FX investors will focus on the latest evolution of Covid pandemic in the UK. With many positives in the price of the GBP by now, we believe that the currency will be vulnerable to any data disappointments, dovish BoE surprises and/or evidence that the number of new Covid cases continues to grow and thus could threaten the government's plans to reopen the economy," says a currency briefing from Crédit Agricole.

Yet despite the rising Covid-19 cases, the Pound is merely treading water: it isn't shooting higher but neither has it experienced a more concerted selloff.

The reasoning behind these apparent deadlocked directional impulses rests to an extent with hospitalisation data which matters greatly for government decision making regarding June 21.

The rise in cases in isolation would give Government reason to press the pause button on the ending of all Covid-19 restrictions on June 21, however the case rate is not translating into a rise in hospitalisation and this offers an important rump of support to Sterling.

Indeed, had hospitalisations risen in tandem with increased cases the government would have perhaps announced a delay to the final unlocking already.

"We know that the vaccine is breaking links between infections, hospitalisations and deaths - a link that was rock solid back in the autumn. Despite the rise in cases, hospitalisations have been broadly flat," Health Secretary Matt Hancock told the House of Commons on Monday.

Despite rising cases, the health service is not coming under any additional pressure. Hancock told the Commons that data showed of the 12,383 Delta variant cases in UK through to June 03:

73% of Delta cases are in unvaccinated people. 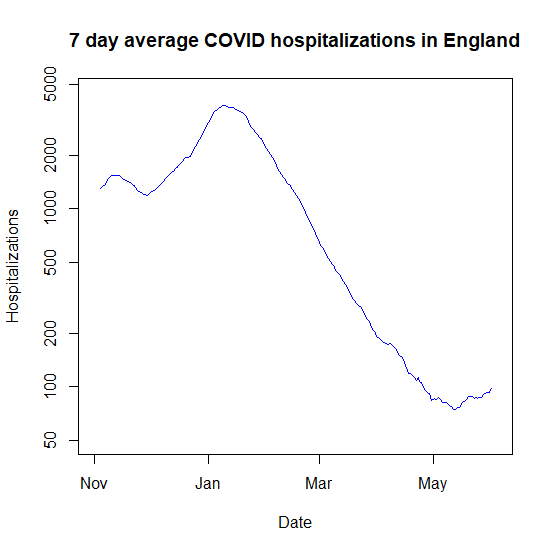 Despite evidence that vaccinations were preventing hospitalisations the Health Secretary said it is "still too early" to say whether the final step of England's roadmap out of lockdown would go ahead on 21 June.

Hancock announced vaccinations would be opened to people under the age of 30 from Tuesday onwards, "bringing us ever closer to the goal of offering a vaccine to all adults in the UK by the end of next month."

"With the majority of the adult population showing antibodies, it will be key to monitor how hospitalisation levels react to increasing caseloads. There is some uncertainty around the next round of reopenings pencilled in for 21 June, though with only minimal economic activities remaining to be unlocked, a delay is unlikely to materially alter the path of GDP," says Montagné. 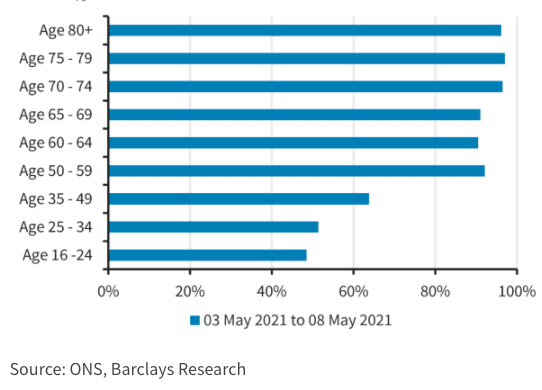 Above: Percentage of people testing positive for antibodies to SARS-CoV-2 by age, England.

While some analysts maintain a view the Pound will lose some value if the final lifting of lockdown is delayed one analyst say any weakness will only be short-lived in nature.

"If it is delayed we would expect GBP to selloff, but only briefly and provide an opportunity to add to longs," says Jordan Rochester, a foreign exchange strategist at Nomura.

Rochester says the Delta variant is a risk to the roadmap but is less of a risk to those drivers of British Pound topside, including UK economic outperformance, a healthy vaccine pipeline, ETF inflows (highly exposed to reopening sectors, under weight technology) and rising UK real yields versus peers.