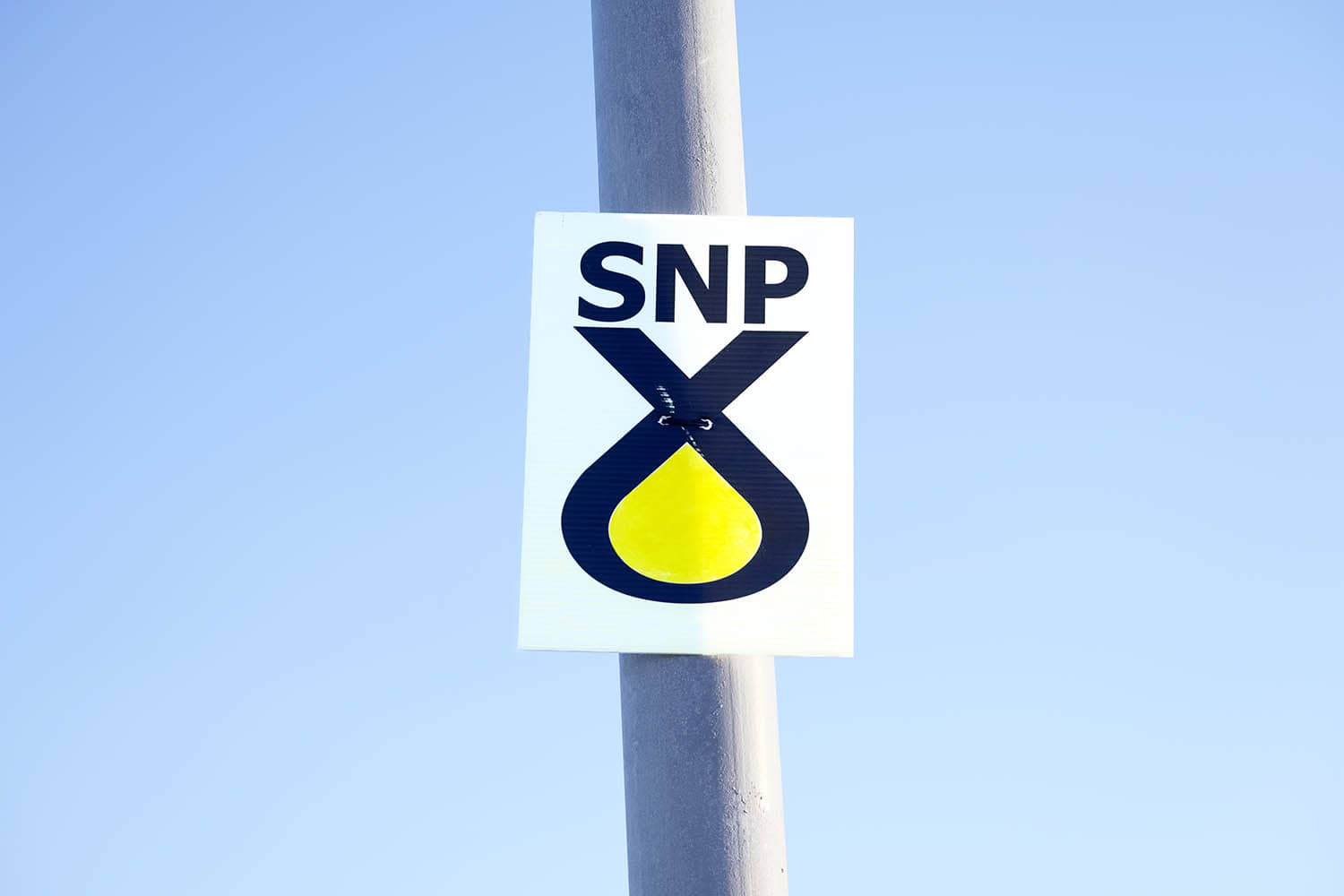 The British Pound is up at the start of the new week as some political risk premium is washed out of the currency, here analysts give their views on the latest action in the currency and what the future holds regarding a Scottish independence vote.

Markets have struck a decidedly more constructive approach towards the currency after weekend news that the Scottish National Party (SNP) secured 64 seats in the Scottish Parliament elections, putting them one seat short of an overall majority.

The Green Party will nevertheless back the SNP to form a coalition that will pursue another independence referendum for Scotland at some point in the future.

"The pound is in a jolly good mood to start the new week after the Scottish National Party narrowly failed to secure an outright majority in elections for the local parliament," says Marios Hadjikyriacos, Investment Analyst at XM.com.

In the wake of the news the British Pound climbed against the majority of its peers.

The GBP/USD was notable in that it broke 1.40 to quote at 1.4089, its highest level since February. The GBP/EUR exchange rate rose 0.45% at one stage to quote towards the previous week's highs just short of 1.16.

"The pound’s reaction suggests that with the SNP unable to secure that absolute majority, there isn’t a clear democratic mandate to pressure London into granting another referendum anytime soon," says Hadjikyriacos.

Jane Foley, Senior FX Strategist at Rabobank says the results of local election in England and parliamentary elections in Wales and Scotland have provided the Pound with some support in the spot market.

But she warns, "the issue of Scottish independence could still undermine the pound in the coming 12 to 18 months."

"We see further potential upside toward a test of 1.4237 as the USD remains otherwise weak and the BoE has pivoted to a more neutral stance," says McCormick.

Fawad Razaqzada, Market Analyst at Markets.com reflects that investors don’t seem too concerned about a future referendum on Scottish independence as the Pound climbed to a high of $1.4090 against the Dollar.

"Still, it is worth watching the situation closely as it could become the next big talking point in the parliament in the months ahead," notes Razaqzada.

GBP/USD is Markets.com's featured chart as it finally cleared the 1.40 handle and ahead of data and central bank speeches from both sides of the pound. "Will we get a new high for this year this week?" asks Razaqzada. 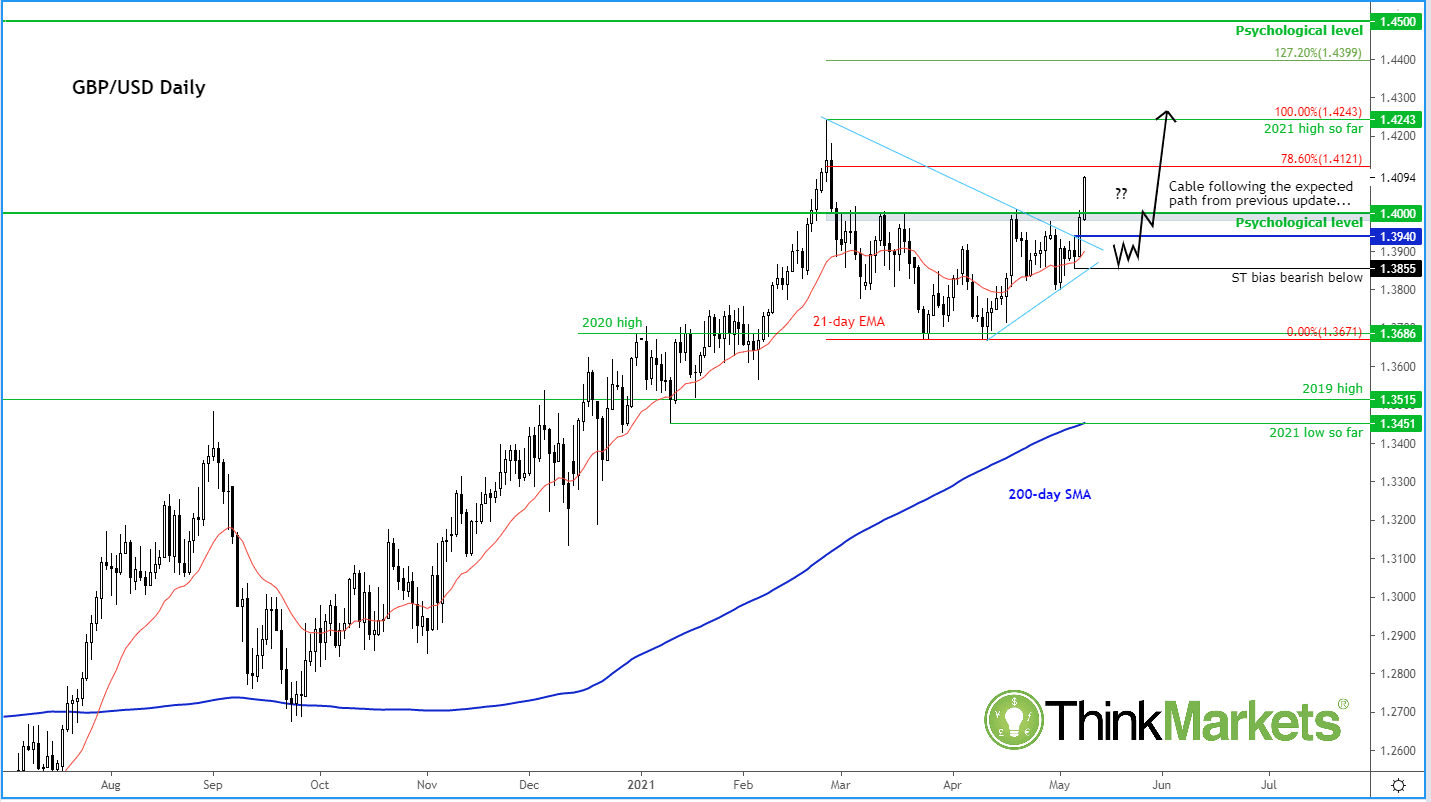 Elias Haddad, Senior Currency Strategist at Commonwealth Bank of Australia (CBA) says over the longer term, the prospect of a constitutional showdown between Westminster and Holyrood means Pound Sterling will continue to trade at a discount to its fundamental equilibrium.

He says the UK might struggle to attract long term investment flows to finance the UK’s widening current account deficit as a result.

Haddad says for the time being Sterling will likely shrug off the political uncertainty generated by the Scottish Parliament election because the outcome was largely anticipated.

"Instead, favourable GBP valuation and the projected solid recovery in UK economic activity favours a higher GBP versus USD and EUR," says Hadad.

"Sterling rose in anticipation that the mandate is too weak after this election result to indicate any immediate threat of a short timeline for a new referendum on Scotland leaving the UK," says Steen Jakobsen, Chief Investment Officer at Saxo Bank.

Saxo tell clients the break above 1.4000 in GBP/USD means the level now becomes the tactical bull/bear line from a technical perspective.