The Lira strengthened Wednesday but was still heavily in the red against many currencies for 2021 and may struggle to advance further ahead of Thursday's Central Bank of the Republic of Turkey (CBRT) decision, the first under Governor Sahap Kavcioglu and a watershed moment for the Lira.

The Lira has fallen heavily against all key counterparts and was carrying more-than -9% losses against the Dollar and Pound for 2021 on Wednesday, while also nursing a -6% 2021 decline against the Euro after the shock March firing of then-Governor Naci Ağbal and his replacement with Sahap Kavcioglu.

Kavcioglu, a former lawmaker of the governing political party and advocate of President Recep Tayip Erdogan’s unorthodox views on inflation and monetary policy, will announce his first interest rate decision since being appointed on Saturday 20 March following the shock firing of Ağbal.

“CBRT decision will be a momentous event,” says Cristian Maggio, head of emerging market strategy at TD Securities. “The very adverse TRY reaction that followed Agbal's sacking has likely convinced Cavcioglu to tactically defer a first cut to next month. Accordingly, we expect the CBRT to hold at 19%.“ 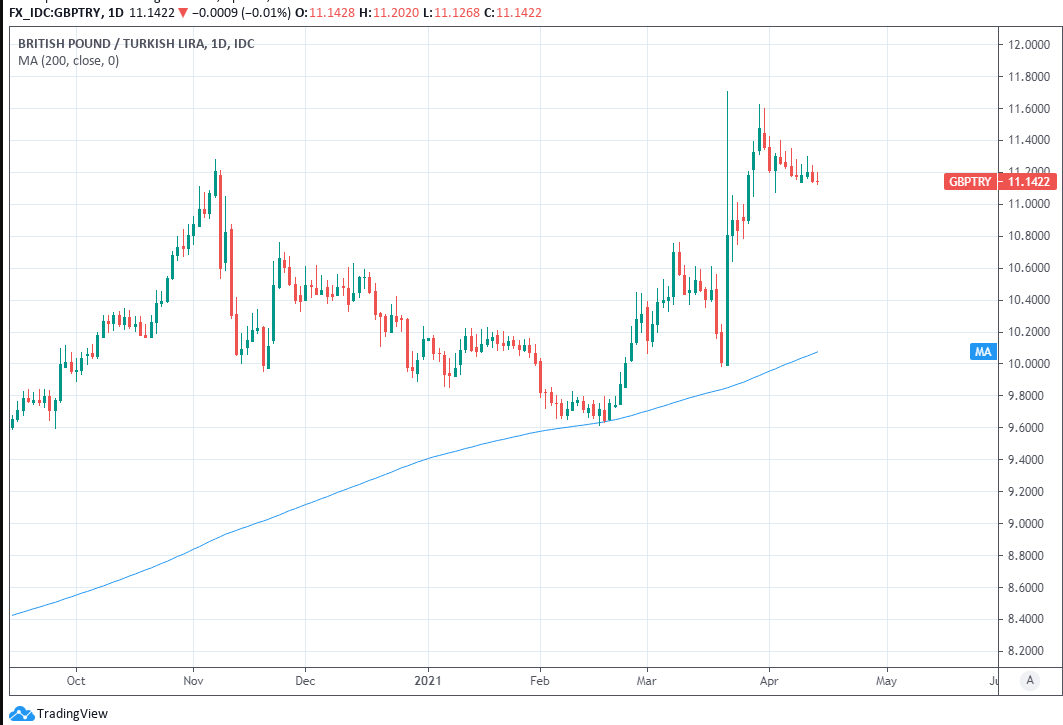 Above: Pound-to-Lira rate shown at daily intervals with 200-day average in blue.

Ağbal raised interest rates 200 basis points to 19% just days before in a move that clearly ruffled feathers in Ankara, delivering a sizeable boost to the Lira in the process, though since then the market has considered itself on notice that a reversal of the March tightening is just a matter of time.

With the market broadly expecting the bank to leave interest rates unchanged when the decision is announced at 12:00 on Thursday, the stakes for the Lira are high. A steady CBRT hand might see the Turkish currency pull further away from recent lows, though many analysts are sceptical.

"It does not really matter whether the base rate is cut immediately, a few months later, or not at all," says Tatha Ghose, an analyst at Commerzbank. " As long as there is no credible prospect of CBT fully and freely hiking interest rates in order to bring inflation rapidly back towards target, the outlook for the lira remains the same. The details of CBT's day-to-day policy operations don’t matter. Our forecast for USD-TRY by the end of 2021 is 10.00."

Thursday’s decision will come just days after President Erdogan announced a partial ‘lockdown’ for the first fortnight of the Ramadan month and warned that further curbs would be seen if the coronavirus isn’t brought under control. 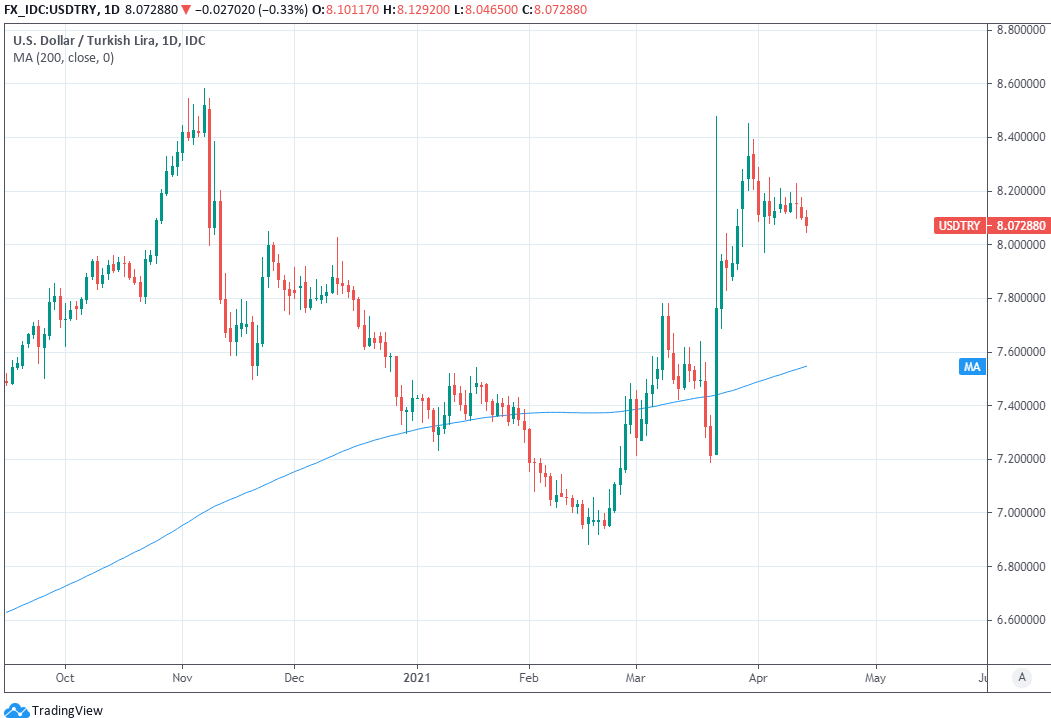 Above: USD/TRY shown at daily intervals with 200-day average in blue.

This is a potentially favourable context for a policy easing, though the decision also comes less than a week after Erdogan told Turkish lawmakers he remains committed to reducing inflation to the single digits, against a target of five percent, in order to bring down interest rates to similar levels.

It’s been almost a decade since the inflation target was last seen while President Erdogan's idea that higher rates cause higher inflation, and its expression through CBRT interest rate policy, is the root of the Lira’s vulnerability.

Central banks typically use interest rates and other monetary policy tools to control inflation with higher rates deployed to curb rising price pressures while lower borrowing costs are used to cultivate inflation wherever it's found undershooting a predefined target.

"Given the CBRT’s credibility issue, the TRY’s fate may well get worse before it gets better," says David Forrester, a strategist at Credit Agricole CIB.

President Erdogan's policy has been to respond to higher inflation with interest rate cuts, which has eroded investor returns over the years as well as the fundamental value of the Lira. Much about the currency’s outlook now depends on what Kavcioglu does Thursday and during the months ahead. 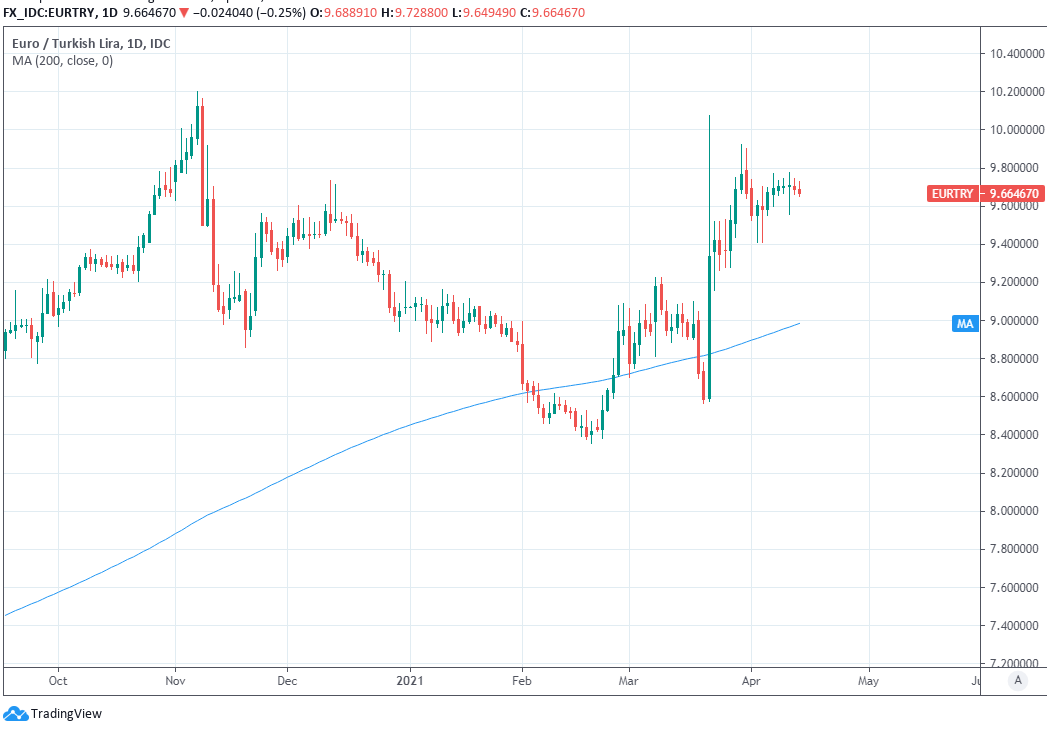 Above: Euro-Lira rate shown at daily intervals with 200-day average in blue.

Kavcioglu, who criticised the high interest rate policy of his predecessor  in a domestic newspaper, has recently told local bankers the CBRTis to remain committed to reducing inflation, echoing the sentiments of Erdogan.

But some analysts say they’ve heard this script before and that a cut to Turkey’s 19% cash rate is likely before long.

The Lira has been plagued by near constant losses over the last decade and especially in recent years but with the CBRT widely believed to be running low on foreign exchange reserves the Lira is generally considered to be one of the more fragile emerging market currencies.

It might become even more fragile on Thursday in the event of a rate cut.