- Speculators increase bets for GBP upside
- Biggest long position since 2018
- Could this mean GBP/USD is about to flip lower?

Speculative investors have ramped up their bets for further gains in the British Pound to levels last seen in April 2018, which some analysts warn is a potential signal that the currency's strong run is about to end.

A long position means that the market is in aggregate betting for gains in the Pound.

"The GBP net long has replaced the JPY as the second largest currency bull bet in these data," says Shaun Osborne, an analyst with Scotiabank.

The increase in bets for Sterling upside is reflected in advances by the currency in the spot market where performance data shows the Pound is one of 2021's best performers, gaining 4.0% against the Euro and 1.30% against the Dollar thus far.

"Net GBP long positions surged to their highest levels since April 2018. Optimism about the impact of the UK’s rapid vaccine roll-out programme on the country’s recovery has been feeding bullish bets on the pound. Net longs were previously lifted by the more hawkish than expected take-away from the February BoE policy meeting," says Jane Foley at Rabobank.

The Commitments of Traders report is issued weekly by the U.S. Commodity Futures Trading Commission (CFTC) and offers the most comprehensive and reliable set of data that shows how investors are positioned on a currency; are they betting on upside or downside, and by how much?

The report covers market positioning amongst non-commercial market participants (speculators). Ole Hansen, Head of Commodity Strategy at Saxo Bank says this group of traders are the most reactive to changes in fundamental or technical price developments and therefore give a view on how the market's approach to a currency is evolving.

Furthermore this allows for us to ascertain what the major trends in the market are as well allowing us to try and decipher when a reversal is looming.

Could the Pound be about to embark on a similar run of declines? "GBP gains have shown signs of slowing in the spot market," says Foley. 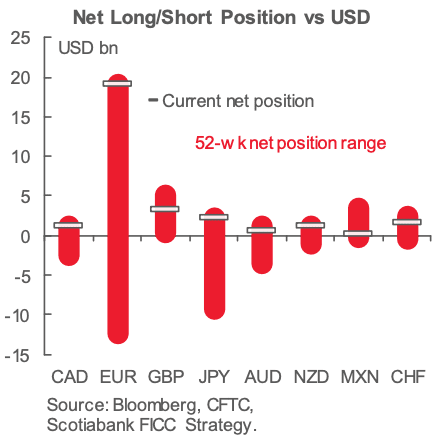 Analyst Jordan Rochester at Nomura says when sentiment on the Pound approaches such levels it can signal a flip against the currency is about to take place.

"We’ve been here before (April 2018 and March 2020) but then witnessed either a wave of Brexit fears or COVID-19 and it’s usually been a signal to flip short… Especially with the majority in leveraged space not real money," says Rochester.

Rochester says the Pound is catching "all the attention" courtesy of the UK's vaccine drive but adds, "it’s hard to know what will be the trigger this time around to upset this recent build of GBP longs but it doesn’t seem too likely that it will be UK specific and instead could be US or broad risk sentiment related instead. It’s why we’re short EUR/GBP rather than long GBP/USD here."

Positioning in Sterling has turned positive in 2021 following a difficult 2020 in which a combination of covid panic and Brexit anxiety combined to ensure sentiment on the currency rarely turned positive.

A number of factors are said by analysts to have driven the shift in fortunes: 1) the completion of the EU-UK trade deal in December 2019, 2) the UK's vaccine rollout campaign, 3) investors no longer expect Bank of England interest rate cuts and 4) the Pound has rebuilt a positive correlation with global equity markets, meaning when they rise so too does Sterling.

Analysts at Barclays have this week told clients an additional reason to be constructive on Sterling is it appears to be little fazed by the rise in global bond yields.

The yield paid on developed market bonds of a long-term duration have spiked over recent weeks as investors fear inflation is about to rise notably over coming months and years.

"Bond yields are essentially the price of money. If yields are low, investors are more likely to deploy funds to riskier plays like stocks, but if yields are rising then equities are no longer quite as attractive from a risk/reward perspective. This phenomenon is especially true if valuations are elevated, explaining why the tech sector has taken a beating lately," says Marios Hadjikyriacos, Investment Analyst at XM.com.

Whether or not yields continue to rise will be a major theme for markets and currencies such as the Pound over coming days and weeks.

"Should we expect GBP to hold steady, and potentially outperform against EUR if ECB manages to talk down its yields lower," says Raczko.

Foreign exchange analysts at Citibank are also backing the Pound.

As such, they add another factor to our growing list of supports for Sterling outperformance in the first half of 2021.