The British Pound rallied and put in another strong performance and advanced against all major peers in the past week, but concerns over a slow exit from lockdown in the UK poses a new potential risk on the horizon.

The Pound's calendar in the coming week is dominated by the release of UK employment data due out on Tuesday the 23rd, but prior to this is an all-important announcement by the Prime Minister on how the UK will exit the current lockdown.

Heading into the new week Sterling bulls have the benefit of strong momentum behind them meaning for now dips are likely to be shallow.

Underscoring this momentum is the observation that the Pound has now risen for four weeks in succession against the Euro. Valuations are also supportive as although the Pound-to-Euro exchange rate has returned above 1.15 it still occupies the lower end of its long-term range: 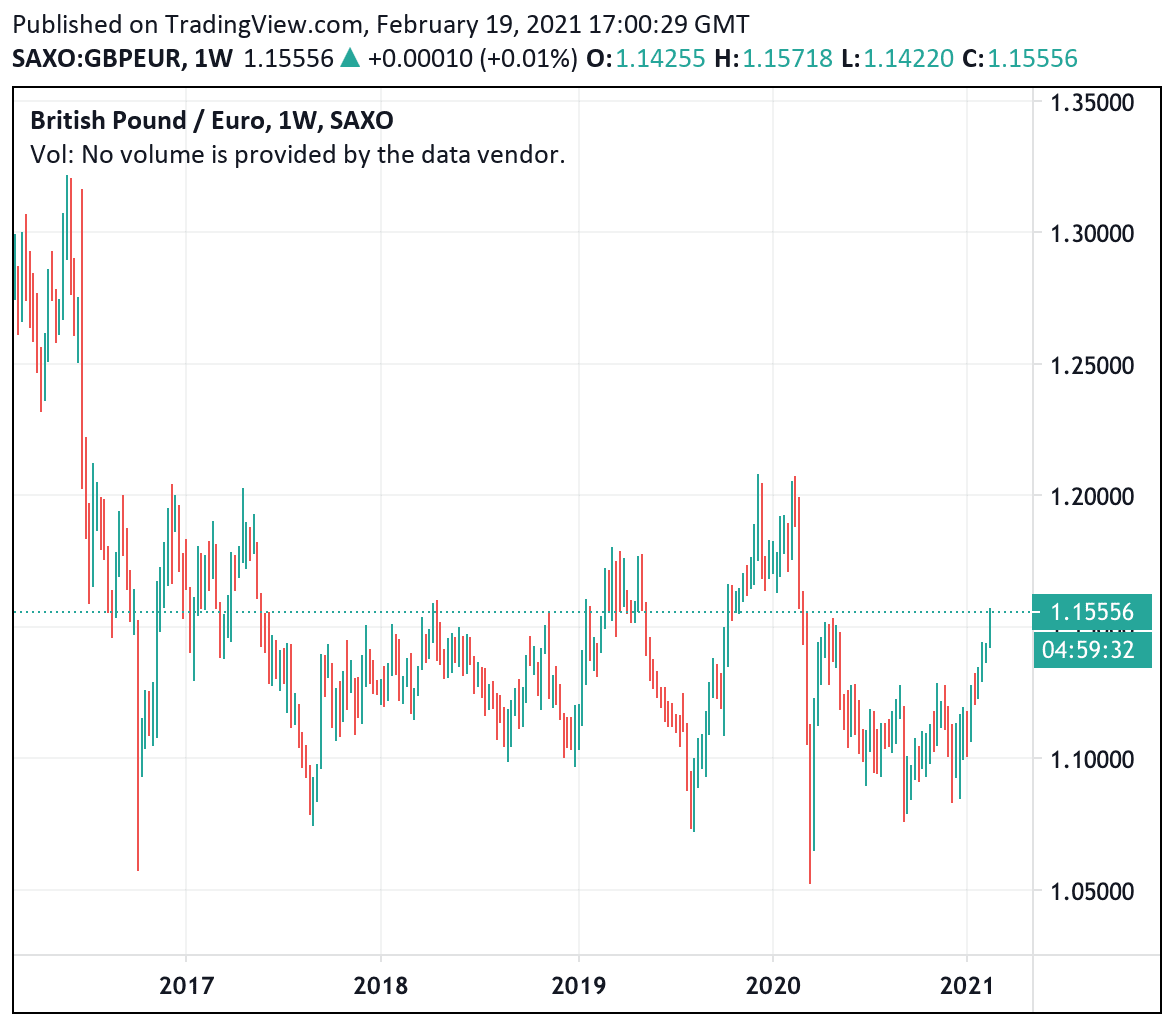 Above: Weekly GBPEUR chart going back to 2016

Most analysts we follow suggest valuation at current levels is unlikely to be a hinderance to the Pound-Euro's trend of appreciation and it is noted that the spread on UK bond yields have widened notably when contrasted to those in Germany, which is seen by analysts as a potential driver of GBP/EUR upside.

The Pound-to-Dollar exchange rate has risen in succession for the past six weeks, but in reality the week-on-week uptrend is far stronger and goes back to the previous September: 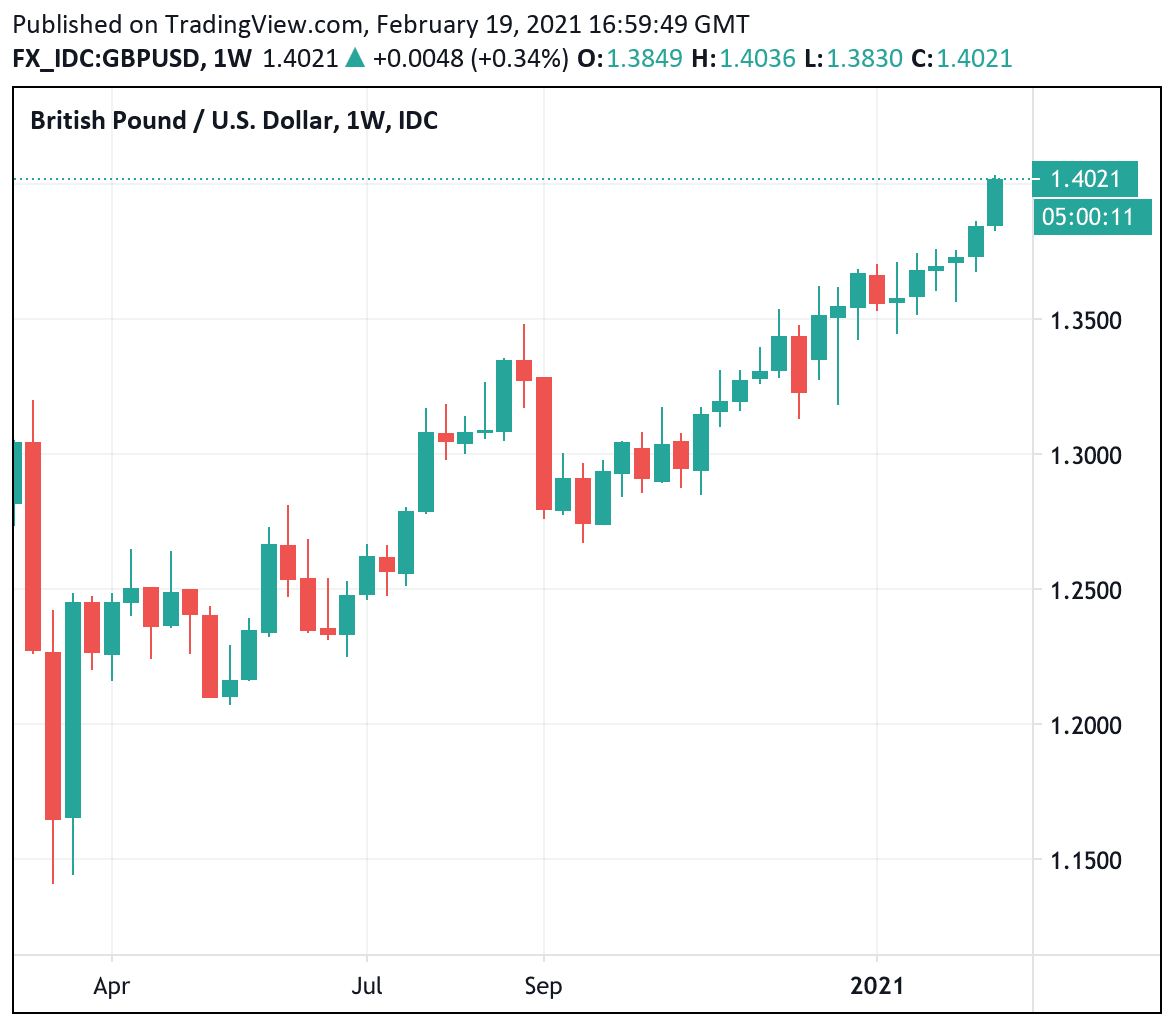 Above: Weekly GBP/USD chart going back to 2020

"The GBP’s current strong bullish momentum suggests further near-term gains. A break above the 1.4000-level could open the door to a retest of the April 2018 high at 1.4377," says Derek Halpenny, Head of Research at MUFG.

2021 has been dubbed the year of the 'reflation trade', where stocks, commodities and other high-return assets outperform as investors prepare for a return of higher economic activity levels and inflation.

It would appear early 2021 is also seeing the 'Sterling reflation trade' take hold, driven by a combination of fading Brexit anxieties, reduced expectations for negative interest rates at the Bank of England and expectations for a strong vaccine-lead UK economic recovery.

"Vaccine rollouts are critical. Now that the market has started to embrace this narrative there are some hopes that GBP could lead the charge, reflecting their relative success alongside the US in the early vaccine campaign," says Mark McCormick, Global Head of FX Strategy at TD Securities.

The coming week could see gains extend provided global investor sentiment remains constructive and investors continue to buy into UK assets such as stocks and gilts.

"The UK’s more favourable valuations and its greater exposure to the sectors that are likely to benefit most from the recovery, such as consumer-facing, energy and financial, suggests that equities in the UK will rebound more rapidly than elsewhere," says Paul Dales, Chief UK Economist at Capital Economics. (See Capital Economics forecast views on GBP here). 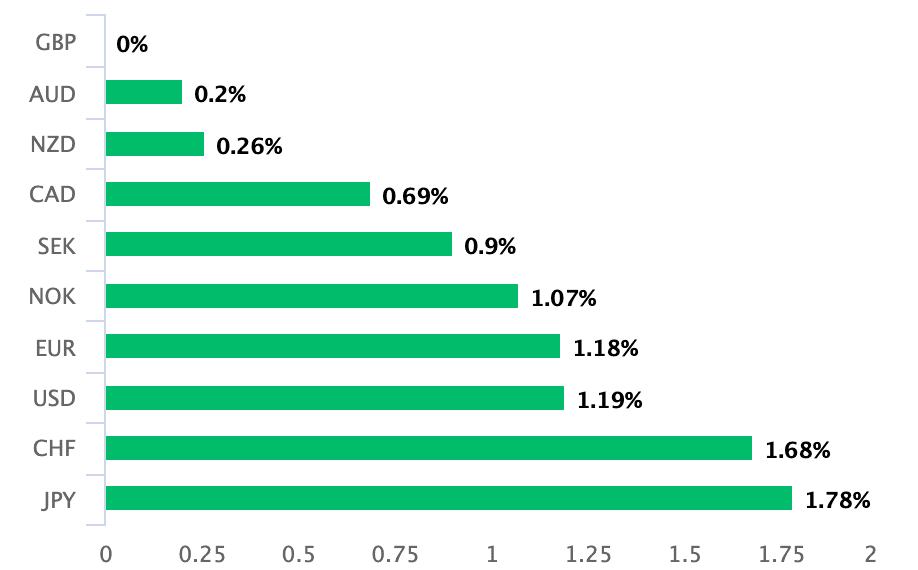 Above: GBP performance in the week ending February 19

However, a major risk to consider is Monday's government announcement on how the UK intends to exit lockdown restrictions.

Prime Minister Boris Johnson is expected to announce schools will reopen from March 08, which in itself will provide a significant impulse into the economy.

However, with scientific advisors urging caution, there have been reports that restrictions could stay in place for longer than the market is currently assuming which could in turn dent bullish assumptions on the Pound.

"A slow lifting of restrictions could disappoint expectations for a faster pace of recovery on the back of the vaccine roll out," says Halpenny.

"The government’s plan to ease restrictions on Monday poses downside risks," he says of Sterling's outlook regarding the planned announcement.

Economists at Deutsche Bank have assessed the landscape and tell clients they expect the following roadmap to be followed:

8 March: Schools start reopening (it maybe phased through various year groups). End-March/early-April: Non-essential retail opens. There is a possibility that outdoor dining also opens at this stage, but we remain sceptical of this given the government's cautious attitude to relaxing restrictions early.

"If our above view is broadly right, this would put the UK back in Tier 2+ restrictions from May onwards, with social-distancing requirements (such as the rule of six) relaxed over the course of the year. In broad terms this should put the economy on course to return to around 95% of its pre-virus levels output by the end of May," says Sanjay Raja, Economist at Deutsche Bank.