- GBP/USD hits highest level since May 2018
- GBP/EUR back above 1.11
- Brexit deal possible early next week
- But concerns over France veto 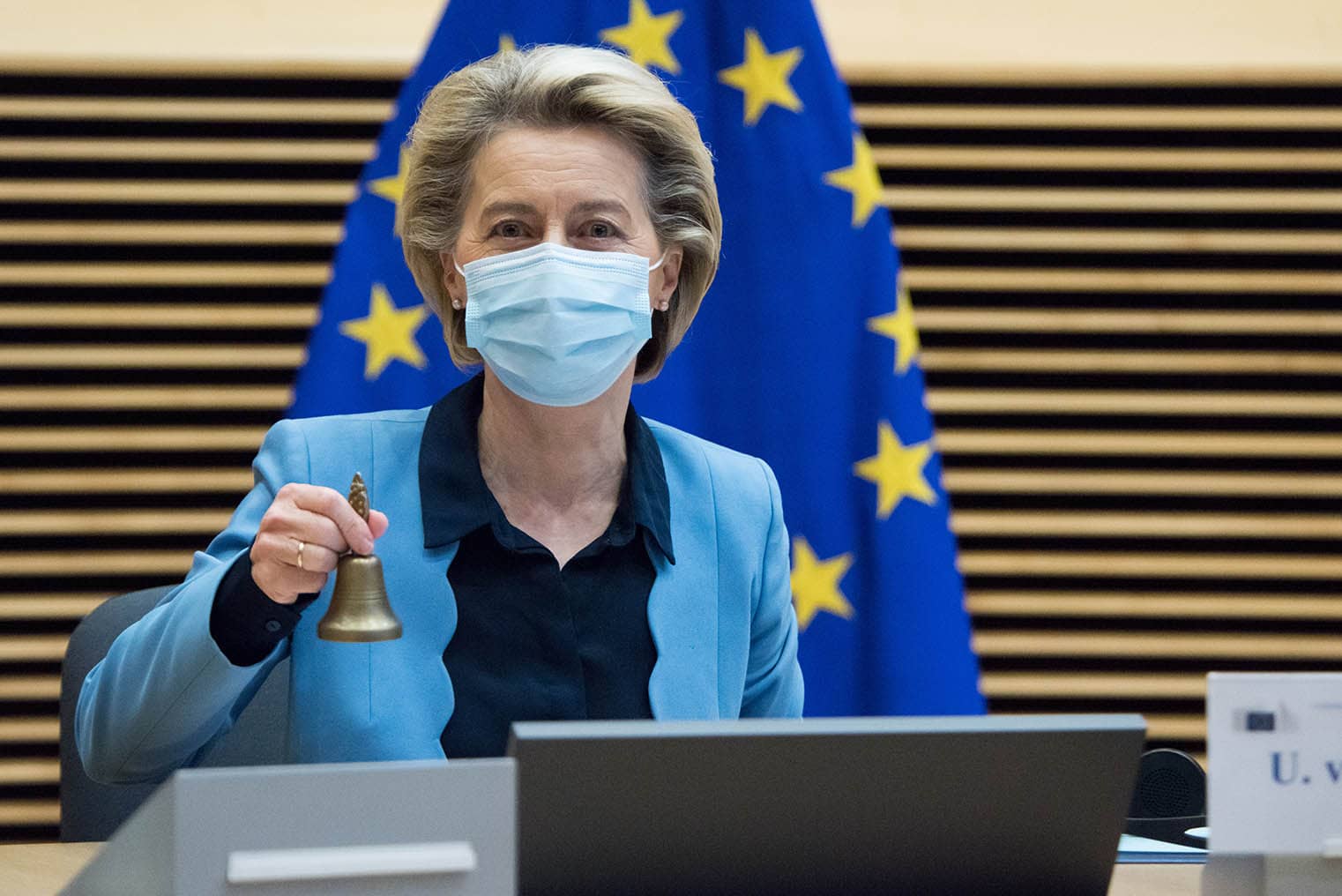 Above: EU Commission President von der Leyen is expected to speak with UK PM Johnson at some point before a deal is agreed. Image Etienne Ansotte, copyright European Union.

The British Pound hit its highest level against the U.S. Dollar since May 2018 and recovered to back above the 1.11 pivot against the Euro ahead of the weekend amidst hopes that the EU and UK were on course to secure a post-Brexit trade talk.

EU Chief Negotiator Michel Barnier was due back in Brussels ahead of the weekend, but changed plans to remain in London with his team to try and capitalise on the momentum behind the talks.

The markets have taken the fact that the two sides are in intensive negotiations as the ultimate sign of progress, choosing to overlook the cacophony of unofficial briefings and contradictory messages coming from 'those in the know' on both sides.

It is believed that the final sticking points facing negotiators will have to be unclogged by UK Prime Minister Boris Johnson and EU Commission President Ursula von der Leyen this weekend. Perhaps a call between Johnson and France's Presdent Emmanuel Macron will also be required.

Numerous media reports are saying the threat of a French veto to and deal remains significant.

"Brexit talks are heading for a showdown between Boris Johnson and Emmanuel Macron this weekend with the prospect of an EU deal now dependent on French access to fish in British waters," reports The Telegraph on Friday morning.

The high-stake talks between Johnson and Macron, and potentially other EU leaders, will likely keep volatility in Sterling elevated until markets close.

"Traders - and perhaps more importantly the trading algorithms - will continue to interpret headlines at face value, and for the moment they sound more positive," says Erik Bregar, Head of FX Strategy at Exchange Bank of Canada.

Multiple press reports from overnight say the UK side was taken aback by a last-minute change in stance by the EU side, who apparently brought new demands to the table.

Sources on the UK side told the Telegraph's James Crisp the interventions were "unacceptable". They said Macron's officials had been "lobbying hard" among member state capitals to agree to fresh demands on fishing, state subsidies and non-regression clauses.

It is believed Johnson and French President Emmanuel Macron will need to discuss the latest demands over the weekend in an attempt to deliver a breakthrough.

"GBP/USD continues to be rocked by Brexit‑related headlines. Irish foreign minister Simon Coveney said there’s a “good chance” of getting a trade deal “across the line in the next few days”. We expect GBP/USD to rally towards 1.3600 if there is material progress towards an agreement. If there is no deal, GBP/USD can edge lower near 1.2800 in the short‑term," says Elias Haddad, Senior Currency Strategis at CBA.

The Pound-to-Euro exchange rate had sunk to a low of 1.1008 in mid-week trade when the headlines concerning the status of talks were decidedly more negative, however Thursday's about-turn in sentiment allowed Sterling to recover ground and the pair is quoted at 1.1090.

Progress against the Euro remains slow as the currency is proving to be the dominant force in the G10 foreign exchange space in early December, with a break in the technical barrier at 1.20 in EUR/USD providing a flood of buying of the single-currency.

The Pound-to-Dollar exchange rate is however making more decisive gains - thanks in part to the broad-based selling of the U.S. Dollar - with the pair going to a new three-month high at 1.3500.

"EU/UK trade talks were fuelled overnight with pizza and tension is clearly high. Let's hope calm heads prevail. EUR/GBP, just above 0.90, is near the middle of its post-referendum range, and in real effective terms, the Pound is still under 5% above its post-ERM low, 45% below the cool Britannia pre-Great Financial Crisis peak and perhaps more importantly, 16% below the post-Great Financial Crisis peak. Dirt cheap for good reason. Even a grotty deal ought to drag it up a bit," says Kit Juckes, Global Head of FX Strategy at Société Générale.

The BBC's Katya Adler said more EU negotiators made their way across to London late on Thursday, the timing of which "makes everything noteworthy right now".

But EU sources tell the journalist that even were there to be an outline of a deal, there will most likely need to be a meeting between Prime Minister Boris Johnson and European Commission President Ursula von der Leyen.

EU member states could also veto any deal if they're unhappy, with France appearing the most likely to do so.

Adler says there remain concerns amongst EU countries about state aid mechanisms and how to enforce agreed environmental and labour standards, meanwhile coastal states such as France and Denmark are also said to be nervous about losing a large chunk of their fishing quotas in UK waters.

But, for the majority of EU countries, "priority is that the rest of the deal is there with the single market adequately protected," says Adler. "If that’s the case, compromising on fish is viewed by EU as a necessary evil. Debate is: how much, how soon and one EU coastal country doesn’t want to lose out more than another. EU leaders have to be able to sell this deal back home too."

The details of the next steps that must be taken by negotiators, the need for high-level talks between Johnson and von der Leyen and the potential for unease amongst EU states suggest that the bar to a deal being reached this week remains high.

As such focus will inevitably return to next week's December 10-11 meeting of EU leaders as the final moment for a deal to be agreed.

Should a deal be announced, analysts say they see the potential for further meaningful gains in Sterling. "A long-awaited UK-EU trade deal appears more likely than not to be agreed soon, adding to the upside pressure for GBP and EUR," says Ray Attrill, Head of FX Strategy at NAB.

Strategists at Swiss bank UBS say they would expect the Pound-Dollar exchange rate to continue its climb in the short term, "but beyond the headline effect, we don’t expect GBP/USD to climb materially above 1.35," says Mark Haefele, Chief Investment Officer, Global Wealth Management at UBS AG.

Noting a limited potential for Sterling upside, UBS say they don't expect the Pound-to-Euro exchange rate to rally much beyond 1.1364 in the next few months.