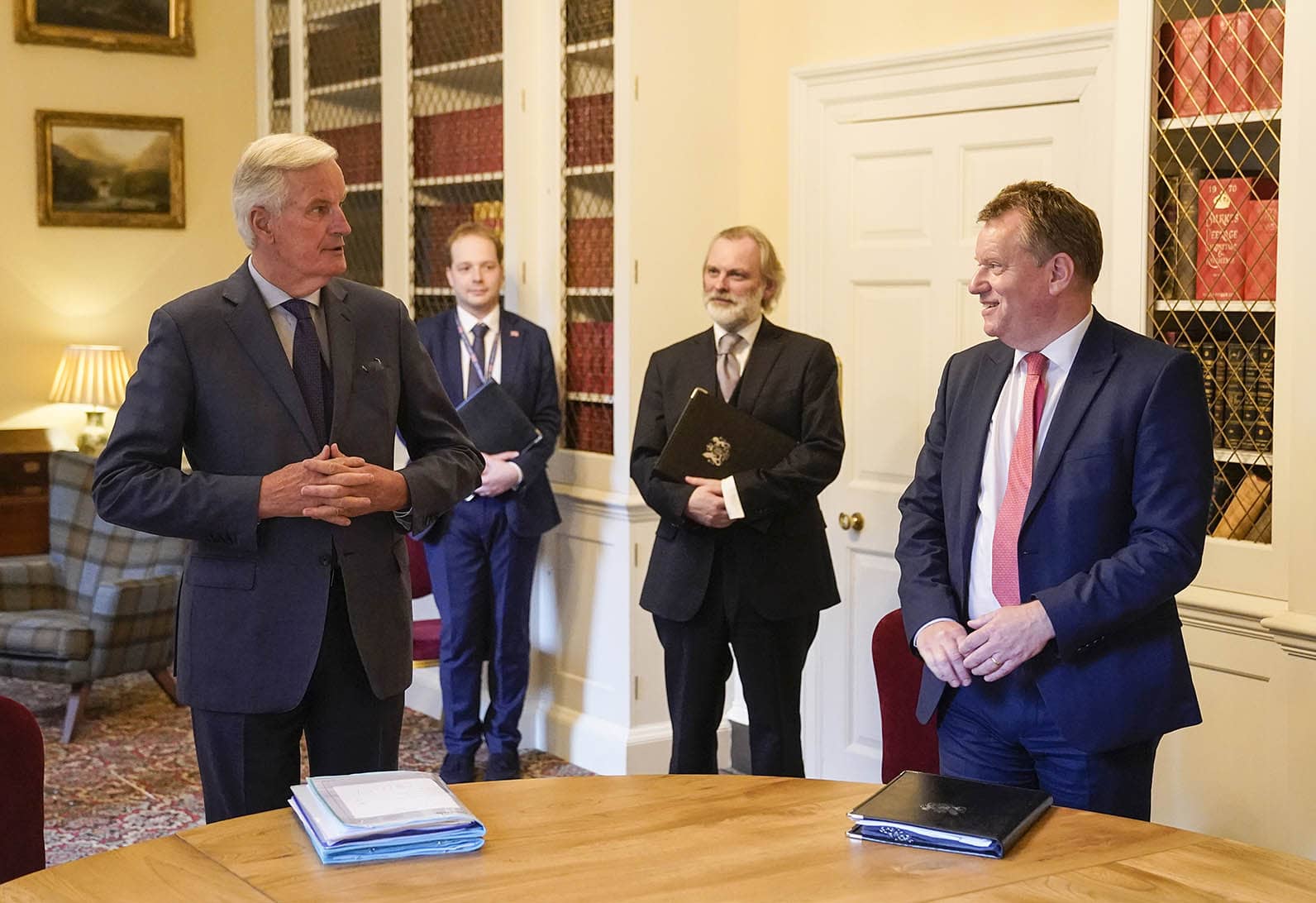 The British Pound outshone the majority of its peers over the course of the past 24 hours as it looked to recover from a shaky start to August, with gains coming against a broadly softer U.S. Dollar, Yen and Franc but also against the Euro which remains one of the better performers in the marketplace of recent weeks.

"The British pound is recording gains versus other major currencies, particularly the Euro, during early Friday trading. Sterling’s gains are due to an improvement in risk appetite, with risk related assets in general performing well, and also some optimism surrounding the ongoing Brexit negotiations after David Frost, the UK chief negotiator, said that an agreement with the EU could be possible in September," says Ricardo Evangelista, Senior Analyst at ActivTrades.

The broad-based outperformance leaves us feeling there are some idiosyncratic reasons for Sterling's gains; indeed when a currency is outperforming the majority of it's G10 peers that is typically a sign that there might be some some genuine strength at play: 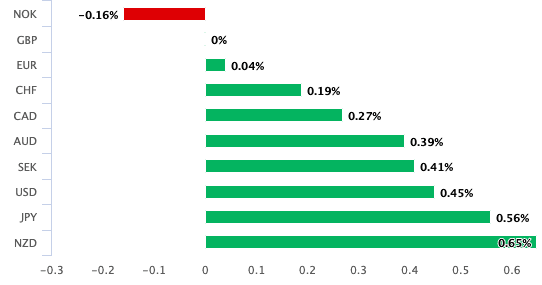 Above: GBP outperformed the majority of peers on August 13

The Pound-to-Euro exchange rate was only marginally higher at 1.1062 and we note that this is one currency Sterling continues to struggle to find traction against. However, the Pound-to-Dollar exchange rate went higher to 1.3117 in a move that should encourage the bulls to step back into a multi-week rally.

There is no single trigger to the Pound's outperformance, and was the case during July when the Pound outshone its peers, there appear to be a number of factors which we believe could be at play: 1) Improving sentiment on Brexit trade talks, 2) Supportive global markets 3) signs the UK's economic rebound is overtaking that of the Eurozone and U.S.

1) With regards to Brexit trade negotiations, while the official line from both the EU and UK is that the two sides remain far apart on a number of crucial issues, analysts are seeing odds-on chance that a deal will be reached by October. Indeed, UK negotiators on Thursday indicated they are pushing for a deal to be reached by September.

UK chief negotiator David Frost said on Thursday that a Brexit agreement can be reached with the European Union in September.

"As we keep saying, we are not looking for a special or unique agreement. We want a deal with, at its core, an FTA like those the EU has agreed with other friendly countries, like Canada," said Frost. "The UK’s sovereignty, over our laws, our courts, or our fishing waters, is of course not up for discussion and we will not accept anything which compromises it - just as we aren’t looking for anything which threatens the integrity of the EU’s single market."

The suggestion by Frost comes ahead of another round of negotiations next week and should serve a reminder that the two sides remain committed to reaching a deal, even if they maintain a cautious stance on such an outcome.

"The negotiations for a post-Brexit deal have apparently been more successful behind closed doors than on the main stage. Markets seem, however, quite relaxed for the time being. We do currently not see any Brexit obstacles on the horizon that could derail the GBP," says Thomas Flury, Strategist at UBS.

While the UK is looking for a September agreement, it must be noted that it is ultimately the EU that sets the deadlines, recall the UK's initial deadline for a deal was July which passed by without a blink of an eye. EU leaders will be meeting at an EU Council summit in October and as is typically the case with the EU the big decisions are only ever made at these summits.

2) Another supportive driver of Sterling is the broader market backdrop that sees stocks and commodities climbing, a significant development as the Pound has shown itself to be a 'risk on' currency which rises when market sentiment is constructive.

"Over the last two weeks the GBP has been the best performing G10 currency. Unless there is a broader deterioration in overall investor risk sentiment, the GBP appears well placed to extend its advance in the near-term," says Lee Hardman, a currency analyst at MUFG.

As long as market sentiment remains constructive we would expect Sterling to remain supported, particularly against the U.S. Dollar which tends to outshine peers when markets are falling.

We would remind readers that August is traditionally a month in which markets tend to lose value and the Dollar tends to gain, and given we are only at the half-way point of the month a retracement of recent gains cannot be ruled out, particularly given geopolitical tensions between China and the U.S. as well as the ongoing inability of Republicans and Democrats to strike a broader coronavirus stimulus package which markets appear to be expecting.

3) A third potential driver of Sterling's recent performance is the view that the UK economic recovery is starting to pick up some pace after it suffered one of the deepest recessions, if not the deepest, of the developed world in the first half of 2020.

The UK economy was one of the last to lockdown but it endured a longer lockdown than many of its peers which was a particularly sizeable blow for an economy that is constituted 80%+ of services.

But, with early July seeing the gates opened on pubs, restaurants, hotels and other elements of the services sector, the economy should pick up some speed into the second half of the year.

How the recovery compares to the recoveries of other economies matters when it comes to exchange rates, as we are in a world where economic outperformance is beginning to matter again. 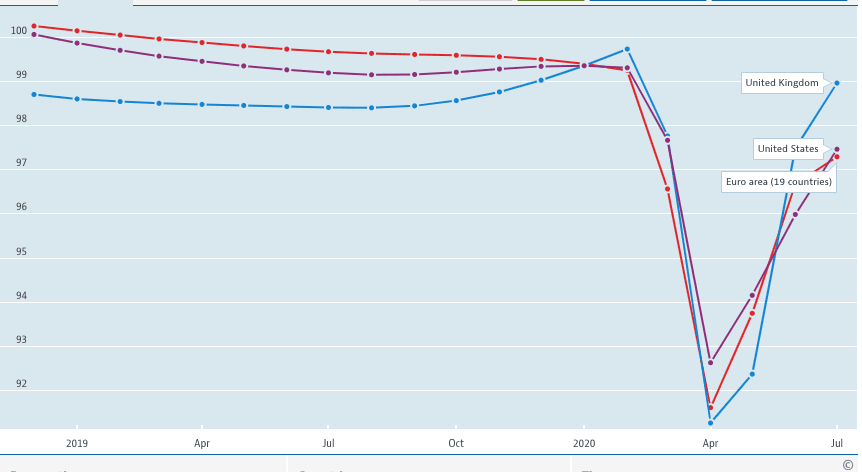 The immediate takeaway is the UK economic recovery has started to outperform that of the Eurozone and the U.S., and should this be picked up by official data in coming weeks and months we could well see this translate into more sustained Sterling advances.

While there is a bounce back underway according to some data points, there are however other data which show the challenges that lie ahead, including:

With the furlough scheme expected to end in October a jump in the unemployment rate is expected by economists which could blunt the recovery. This would come roughly around the point that the UK and EU head for an October crunch down, suggesting the prospect of heightened volatility in Sterling in the Autumn.

If you have Sterling payment requirements - in either direction - and would like to prepare for future volatility, our partners at Global Reach would be happy to assist.