We feel that the unanimous vote to keep policy settings unchanged was seen as an initial Sterling-positive development as it would suggest the bar to further quantitative easing and further interest rate cuts is potentially higher than markets might have expected.

Another pro-Sterling takeaway was a view contained in the statement that their latest set of economic projections are done from "a less weak starting point", suggesting the economy had performed better than they had previously expected over recent weeks.

"Sterling has initially spiked higher in the wake of the BoE announcement possibly helped by a lack of indication that a move to negative interest rates is imminent," says Rhys Herbert, Senior Economist at Lloyds Bank. 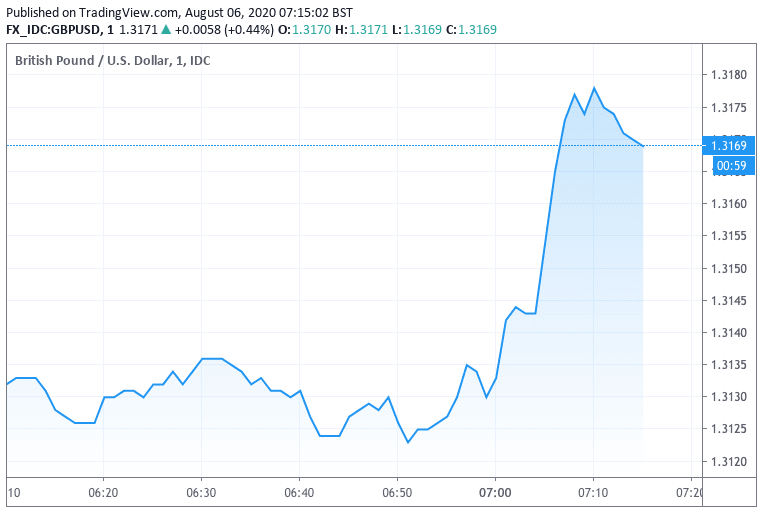 "Sterling climbs to 5-month highs after the latest BoE decision - unchanged on rates and QE. Not a lot in it but maybe slightly less dovish than some expected with no hints of negative rates any time soon and small upgrades to growth projections," says market analyst David Cheetham at Refinitiv.

Looking at the economy, the Bank expects UK GDP to have been over 20% lower in the second quarter of 2020 than in the fourth quarter of 2019.

"But higher-frequency indicators imply that spending has recovered significantly since the trough in activity in April. Payments data suggest that household consumption in July was less than 10% below its level at the start of the year. Housing market activity appears to have returned to close to normal levels, despite signs of a tightening in credit supply for some households," said the Bank.

One area of concern for the Bank - which will likely ensure the Bank stands ready to increase assistance if necessary - is the unemployment situation. "Considerable uncertainty remains about the prospects for employment after those support schemes unwind. In the near term, the unemployment rate is projected to rise materially, to around 7½% by the end of the year, consistent with a material degree of spare capacity," said the Bank.

The Bank said that interest rates will not rise until inflation starts moving back towards their 2.0% target which is only forecast to be reached in two years' time.

"Twelve-month CPI inflation increased to 0.6% in June from 0.5% in May. CPI inflation is expected to fall further below the 2% target and average around ¼% in the latter part of the year, largely reflecting the direct and indirect effects of Covid-19. These include the impact of energy prices and the temporary cut in VAT for hospitality, holiday accommodation and attractions. As these effects unwind, inflation rises, supported by a gradual strengthening of domestic price pressures as spare capacity diminishes. In the MPC’s central projection, conditioned on prevailing market yields, CPI inflation is expected to be around 2% in two years’ time," said the Bank. 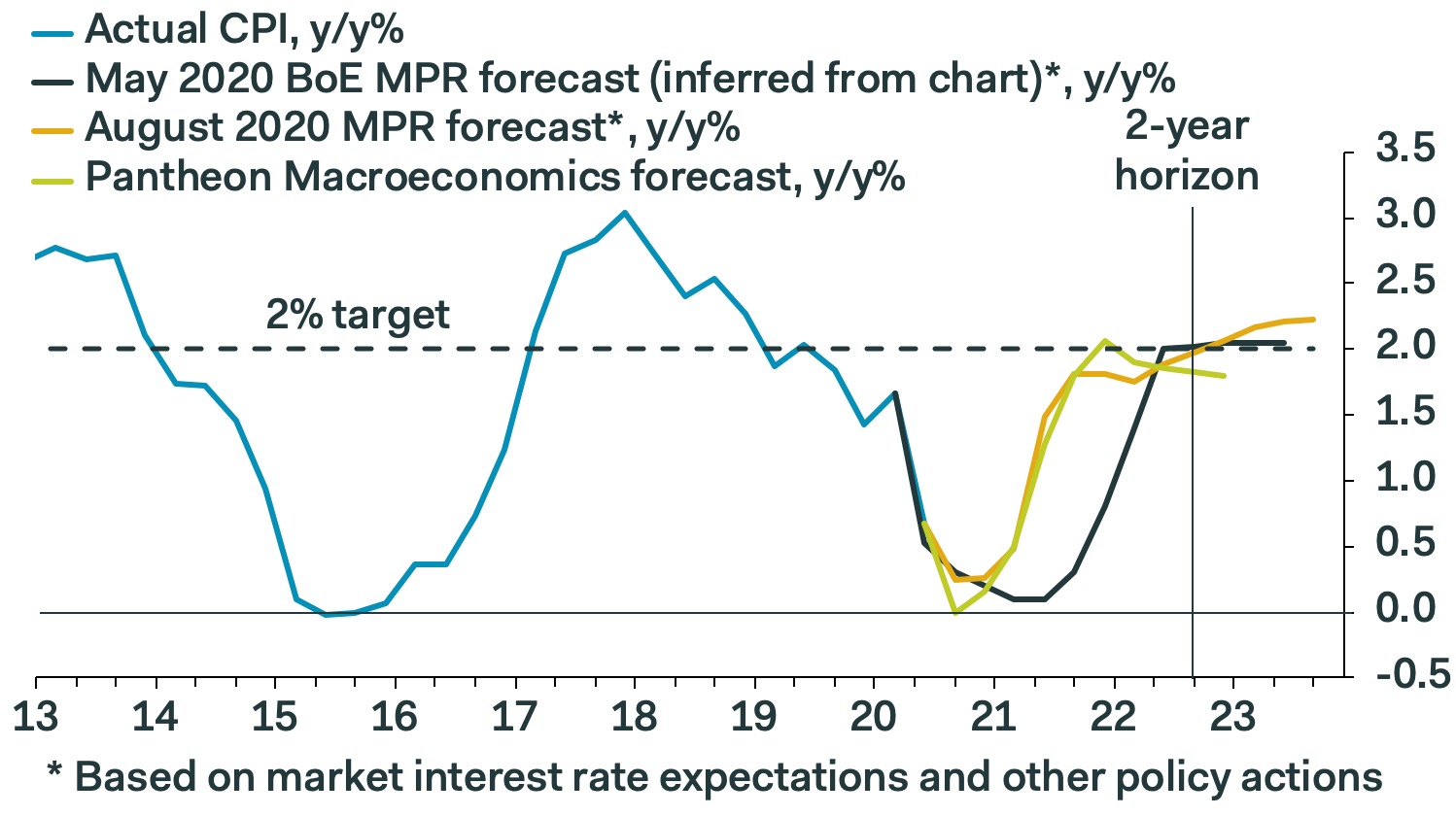 The above shows the Bank expects CPI inflation to rise to the 2% target in two years’ time and then to exceed it slightly thereafter, if Bank Rate follows the declining path expected by markets. "This is the Committee’s way of pushing back a little against expectations it will cut Bank Rate further, though by saying that the risks to its projections are tilted to the downside, investors should continue to price-in a significant chance of more easing," says Samuel Tombs at Pantheon Macroeconomics.

The Bank's programme of quantitative easing - that was raised to £745BN in June - will likely be spent by the end of the year and the question for markets is whether the Bank adds to its package in coming months; an outcome the market was on balance expecting to be signalled today.

However, no further signals of a potential extension of the envelope be forthcoming would be positive for Sterling as the general rule of thumb is that further quantitative easing is negative for Sterling valuations.

Weighing on the Pound of late has been the dramatic decline in government bond yields which in some cases have fallen below zero, driven by the Bank's quantitative easing programme.

The relatively fast decline in UK yields relative to other countries poses a disincentive for international investors to channel their capital into the UK, thereby depriving Sterling of a source of support.

However, should this trend of falling yields ultimately end as the Bank eases back on quantitative easing, we would imagine the Pound would once more start finding support from this channel.

But the Bank should have acted today says one economist we follow who says it is inevitable that further support will be announced by year-end.

"We think this meeting likely will turn out to be a missed opportunity for the MPC to have done more to support the economy," says Samuel Tombs, Chief U.K. Economist at Pantheon Macroeconomics. "With all labour market signals currently flashing red and inflation set to remain subdued, swifter action would have been preferable."

Tombs says most households have seen little benefit yet from the Bank’s actions, while quantitative easing has contributed to the recovery in asset prices, mortgage rates have held steady, despite the 65bp decline in Bank Rate.

As such, Pantheon Macroeconomics expect the Bank will indeed act again, by boosting quantitative easing by a further £50BN at their November meeting.

Another key issue for markets was the question of further interest rate cuts that would see the Bank Rate move down from 0.1% to 0% or below.

The Bank is currently reviewing whether this is feasible, as they currently judge 0.1% to be the lowest level they can take interest rates without creating harmful side effects for the financial sector, and cuts below this level simply won't have the desired stimulating effect on the economy.

But eyeing other central banks to have cut rates below zero - for instance the ECB - the Bank are questioning whether the UK's 'Effective Lower Bound' has moved lower over recent months.

For the Pound, the likely impact on the Pound of such a move would be to create further weakness.

"Lower financial market interest rates would also be expected to lead to a depreciation of the exchange rate, boosting demand for UK exports, and raising inflation via higher import prices," said the Bank, in its Monetary Policy Report, also released today.

However, the Bank note a suite of potential negative side effects of cutting interest rates to 0% and below, particularly on commercial banking activities, and the overall message is that the review process is ongoing.

Bailey says Negative Interest Rates Possible, but no Plans to Use them

Further insights into the Bank's views came in a press conference delivered following the decision, but only made available at 10:00AM.

Governor Bailey touched on negative interest rates, saying they remain a potential policy tool in the future, but are unlikely to be used imminently.

He adds the effectiveness of negative interest rates depends on which part of the economic cycle the economy finds itself in, and ECB research suggests they are most effective when the economy is in an upswing.

The takeaway from both Bailey's comments, and the lengthy explainer in the policy report, is that there is much debate on the matter which suggests the bar to actually delivering negative rates is particularly high.

This assessment should be on balance supportive of Sterling as it eases expectations for a rate cut in the near future, indeed market pricing should ultimately start showing that the next move on rates will be a hike.