- UK sees eye watering economic slump
- Market slump hits GBP vs. EUR, USD and JPY
- But prompts gains vs. AUD, NZD
- Markets looking steadier Friday
- Is the rout over, or is this a pause?

The British Pound rebounded ahead of the weekend amidst a tentative recovery in global stock markets and refusal by investors to take any notice of the UK's worst-ever GDP release that showed the economy shrank at its fastest pace ever recorded in April.

The Pound is trading higher against both the Dollar and Euro, following the release of GDP data that showed the UK economy suffered a 24.5% decline in GDP year-on-year in April, thanks to the covid-19 lockdown.

"The GDP data reveal that at its peak in April the lockdown reduced economic output by 25%, making the coronavirus crisis by far the deepest recession on record. For comparison, the peak-to-trough fall in GDP was 7% in both the Global Financial Crisis and the Great Depression," says Andrew Wishart, UK Economist at Capital Economics.

Despite the eye-watering data, the Pound showed little reaction to the numbers confirming they were expected by the market. Indeed, the UK is not alone in experiencing such an economic contraction as it is a pattern being repeated right across the world. We would argue that what matters from here is the speed economies recover from the slump, with foreign exchange markets likely to reward the currencies of those economies that return to growth fastest and with most vigour.

For Sterling, the near-term focus remains the moves in global equity markets and commodity prices which are trending higher ahead of the weekend after the substantial drop suffered over the course of the past 24 hours.

"Risky assets have picked themselves off the floor and the USD has weakened alongside it," says Mark McCormick, an analyst at TD Securities. "The market will focus on the general risk tone and the spread of the virus for direction following the sharp risk-off move on Thursday.

Stock markets have come under significant pressure this week, amidst a combination of disappointment over a lack of any fresh stimulus measures announced by the Federal Reserve mid-week and some old fashioned profit taking on a rally that looked to be getting ahead of itself given the dire state of the world's covid-raddled economy. 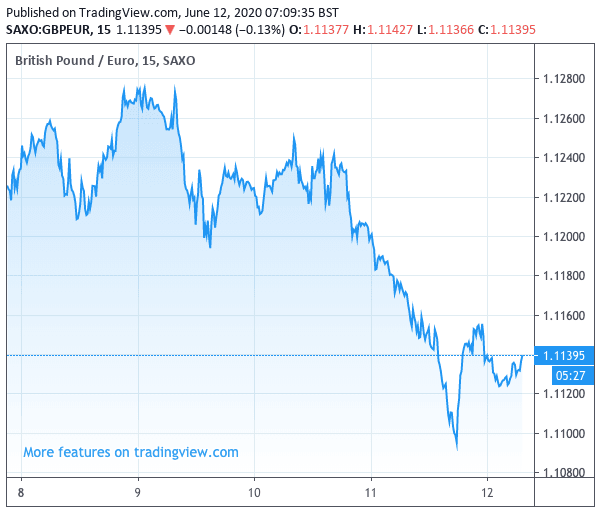 Above: GBP/EUR this past week

What is however interesting is that the deep decline in stock markets and commodity prices seen this week has no single narrative behind it, rather a combination of factors at play such as concerns over new covid-19 cases in the U.S., fatigue in the rally and disappointed investors that apparently needs regular fresh pumps from the Federal Reserve.

"Tentative signs of potential Covid-19 breakouts in a number of key U.S. states do provide warning signals of a potential surge of cases over the coming weeks. With the likes of the S&P 500 and Nasdaq recovering the entirety of the coronavirus selloff, the risk to reward outlook was always heavily-skewed to the downside," says Joshua Mahony, Senior Market Analyst at IG.

The Pound-to-Euro exchange rate has fallen back to 1.1135, having been as high as 1.1280 this week amidst the decline in investor confidence.

The Pound-to-Dollar exchange rate has meanwhile fallen back to 1.2590, having been as 1.2811 earlier in the week.

"I’ve rarely seen such an astonishing turnaround in market sentiment – from "buy anything" to "sell everything" in just a day or two," says Marshall Gittler, Head of Investment Research at BDSwiss Group. "From the FX perspective, yesterday’s market was proof of the Dollar’s safe haven characteristic. The immediate cause of the plunge in stock markets around the world is fear of further infections in the U.S., and yet the Dollar was the best-performing currency." 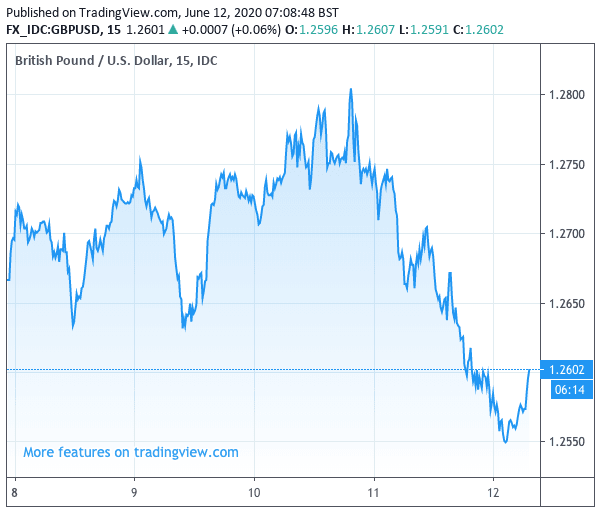 Above: GBP/USD this past week

How the Pound closes out the week ultimately depends on how the global picture plays out, for now the mood is improved which should allow for some consolidation.

U.S. index futures as quoted by IG are looking set to open higher, so perhaps the rout has ended. Whether or not this is a floor or a pause is the billion dollar question. 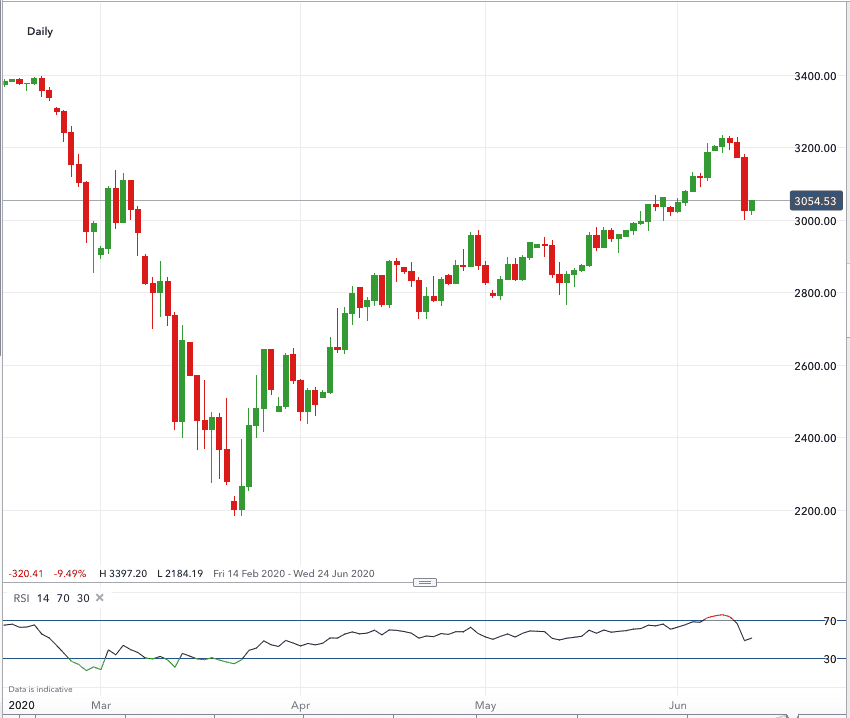 Above: S&P 500 chart from IG, with futures showing the potential for some respite ahead of the weekend

How the market ends Friday should give a good indication as to whether the recent rally - from late March until just last week - is in fact a bounce within a broader bear market, or whether this week's decline is a dip within a genuine recovery that can continue.

Readers should keep an eye on the evolution of new covid-19 cases in the U.S. as it exits lockdown, as data coming out of Texas and Florida is not encouraging. If the U.S. has indeed exited lockdown too soon and there is a second spike in infections we would expect further market stresses.

"The cause of the turnaround is the growing evidence that the dreaded “second wave” of COVID-19 infections is indeed starting in the US as most states emerge from lockdown and people behave as if the virus had been wiped out. We’re seeing a spike in cases in several states a week or two after the lockdown ends. Typical of this is Texas, where new cases soared to their highest-ever level just a few weeks after the lockdown ended," says Gittler. 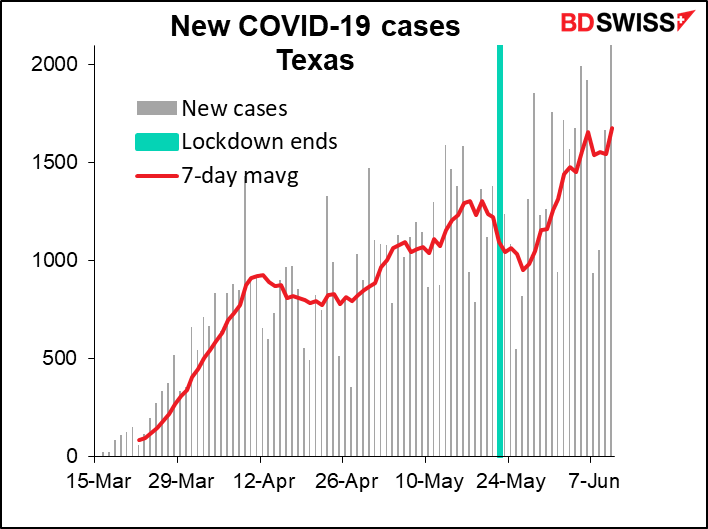 There are however two points to note: 1) U.S. President Donald Trump has indicated that there will be no return to lockdowns, regardless of the evolution of the disease in the country. This is understandable given his desperate desire to see the economy and markets recover before the November election, and 2) there has been no significant example of a second wave of covid-19 anywhere else in the world. Yes infections have ticked up in some countries after measures were eased, but second waves they were not.

We are therefore inclined to see the recent market decline as a setback to the recovery, noting that there is substantial support being offered by the U.S. Federal Reserve and other global central banks, suggesting the funding pressures that characterised the sharp drop of late-February / early-March is unlikely to be repeated.

This observation is an important one for those watching Sterling markets, as it was those funding pressures that put Sterling under significant pressure and prompted drops below 1.10 against the Euro and 1.20 against the U.S. Dollar.

Global stock markets do tend to be forward looking in nature, therefore it could be that the recovery is now reflected in equity prices and markets are due to enter a consolidative phase. If this is a case Sterling could well find itself supported around current levels, and once again start focussing on domestic issues, such as Brexit where substantial anxieties remain.