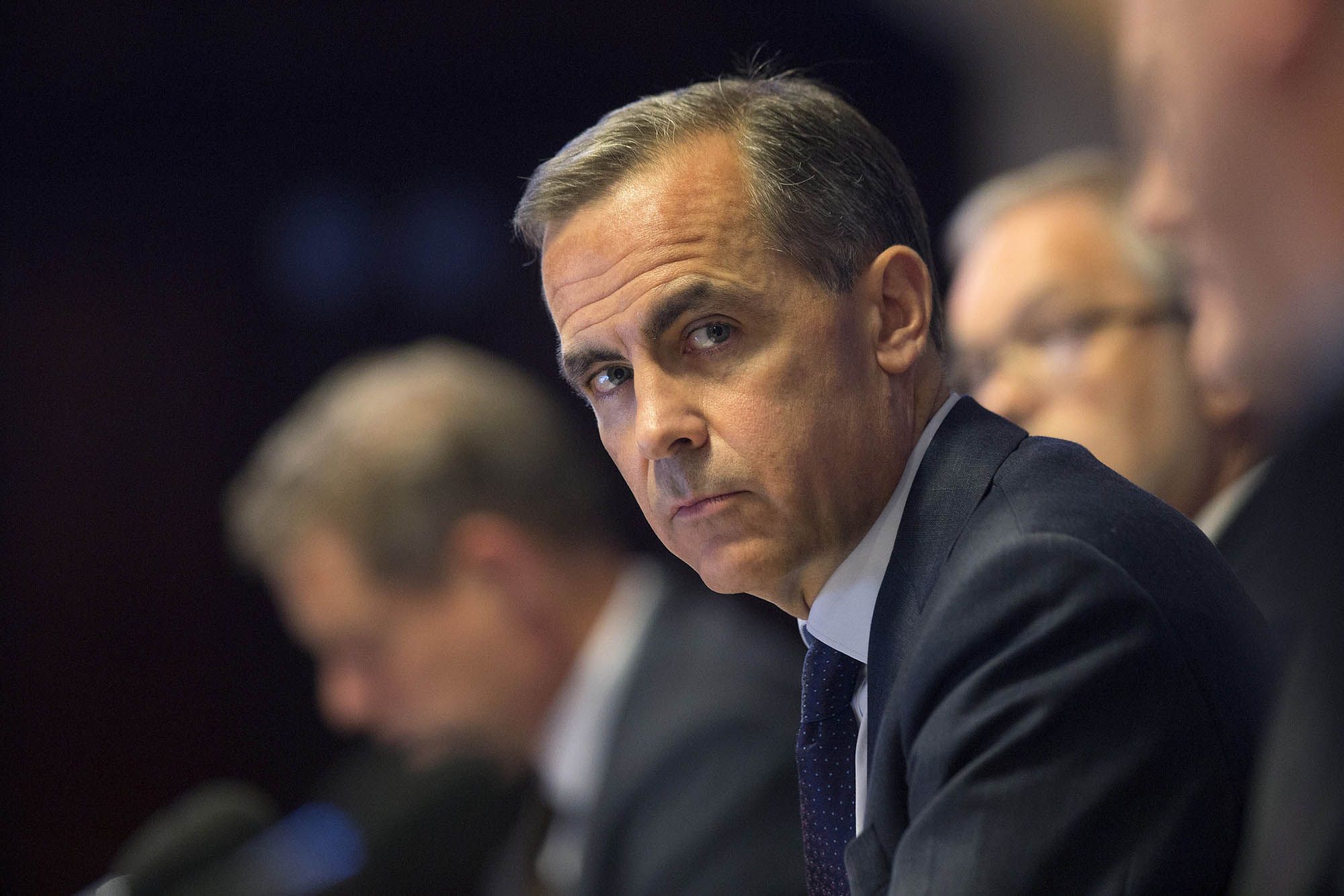 The British Pound advanced against its key rivals Thursday after the Bank of England opted to keep interest rates unchanged at their January 30 meeting, saying they saw early signs that the UK economy was picking up some fresh momentum in the wake of the December 12 General Election.

This was perhaps the most difficult meeting to predict for many years, with money market pricing suggesting odds of a rate cut were at 50/50 heading into the meeting meaning which ever way the Bank opted to go they would deliver a surprise.

The bigger the surprise, the more pronounced the currency market reaction is likely to be, hence we are seeing moves of over a percent against the Australian Dollar and New Zealand Dollar.

The official bank rate was kept at 0.75%, in what eventually turned out to be a relatively 'hawkish' event in that only two members of the nine-strong Monetary Policy Committee (MPC) opted to cut rates.

The 7-2 vote will come as a surprise as it suggests those MPC members who warned earlier in Janaury that rates might need to come down have ultimately been convinced that the recent pickup in UK economic activity might be more enduring. That more members did not vote for a rate cut appears to suggest there is no imminent likelihood of lower rates, and this is seen to be behind an initial boost in Sterling value.

Michael Saunders and Jonathan Haskel were the two MPC members who voted for a cut to rates.

The message from the Bank was that they saw signs that the UK economy had picked up some traction since December's election, while a stabilisation in the global economy meant there was no need to provide stimulus via lower interest rates. 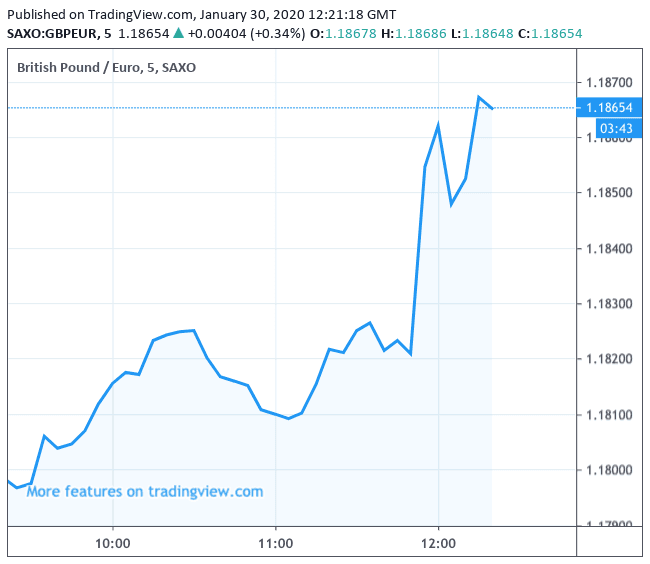 Above: Sterling-Euro rallies on the BoE decision, confirming the market guages the outcome to be relatively 'hawkish' i.e. the prospect of lower interest rates in the near future is falling.

"Sterling set off higher on basis that no additional members called for a cut this time round (7-2 in favour of hold) despite comments from the likes of Vlieghe, Tenreyro and Carney himself suggesting that further accommodation in the short term may be warranted," says John Goldie, FX Strategist at Argentex Group Plc. "For the Pound, a cut was likely needed to warrant a concerted move lower while the upside appears to remain capped by the recent range highs, especially on GBP/EUR and GPB/USD."

The Bank said in a statement that majority of members on the MPC expect further recovery in near-term growth amidst reduced Brexit uncertainties and expectations for a fiscal boost to the economy in the forthcoming March budget.

The statement added it is meanwhile too early to gauge any negative effects of the neo coronavirus outbreak in China.

The Bank said that interest rates would however only stay at current levels if the pickup in economic activity is sustained over coming months; if not then a cut to the interest rate would be required.

“With an economy growing below potential and inflation well below target it is likely just a matter of time before the Bank reduces rates as the tentative bounce in sentiment may prove to be temporary given the uncertainty that still remains around the UK’s future relationship with the EU and its other trading partners,” says CJ Cowan, assistant portfolio manager at Quilter Investors.

However, the Bank also added that should growth be sustained, then the next move to rates would have to be higher.

“Today’s Bank of England interest rate announcement has caused the Pound to strengthen by around 0.5% against the U.S. Dollar and 0.35% against the Euro. This has broken a five day losing streak for the Pound, its longest this year. Evidently positive data in the lead up to the decision, such as strong figures for the manufacturing and service sectors plus robust employment growth is likely to have convinced 7 of the 9 MPC committee members at the BoE not to act today," says Christopher Redfern, Corporate Dealing Manager, at Moneycorp.

Thus far it has only been survey data that has suggested the UK economy is improving, and for the Pound to gain any meaningful upside traction official data - which starts coming through in February - would have to reflect what the surveys are showing. Expectations for further gains in the value of Sterling over coming weeks will now ultimately be dependent on the direction of travel in UK economic growth.

If official growth fails to show a post-election bounce, then expect the pricing for an interest rate cut at some point in 2020 to start creeping higher again.

Such a development would cap the Pound's strength, and potentially introduce some weakness.

"We think any relief rally in Sterling will prove short lived as we believe markets are likely to roll out their rate cut expectations into the coming months. We continue to emphasise that the burden of proof remains on the data to drive GBP sentiment. So far, and outside of the housing data, the evidence of a meaningful rebound in confidence has been lacking," says Kamal Sharma, FX Strategist at Bank of America.

"A rate cut in May or August is now looking increasingly likely so the healthy gains the Pound has seen aren’t expected to last. All eyes will now be on upcoming UK technical data releases which will play an extremely important role in the coming months," says Sebastien Clements, currency analyst at OFX.

Perhaps the most 'dovish' element of January's MPC event was the lowering of economic forecasts, which in itself hints at the need for lower interest rates over coming months.

Forecasts for the economy - contained in the quarterly Monetary Policy Report - show the Bank's economists have lowered their expectations for growth, when compared to the previous set of forecasts.

Inflation forecasts therefore suggest CPI inflation will only reach the 2% target at the very end of the three-year outlook period, should rates remain at 0.75%.

"The MPC expects inflation to only just reach the 2% target in two years’ time. Accordingly, the MPC seems to have endorsed market expectations that interest rates need to fall to 0.50% and stay there," says Ruth Gregory, Senior UK Economist at Capital Economics.

"UK GDP growth is projected to pick up a little in early 2020. Further ahead, and conditioned on a market path for Bank Rate that falls slightly over the forecast period, the recovery in UK growth is supported by a pickup in global activity, a further decline in Brexit uncertainties and the Government’s announced spending measures," reads the Monetary Policy Report.

"The forthcoming Budget almost certainly influenced the Monetary Policy Committee's decision, as that is expected to provide a degree of stimulus in itself," says Ayush Ansal, chief investment officer at Crimson Black Capital. "The fact that the Bank announced rates could even be hiked underlines just how mixed the signals are that the economy is currently giving out."