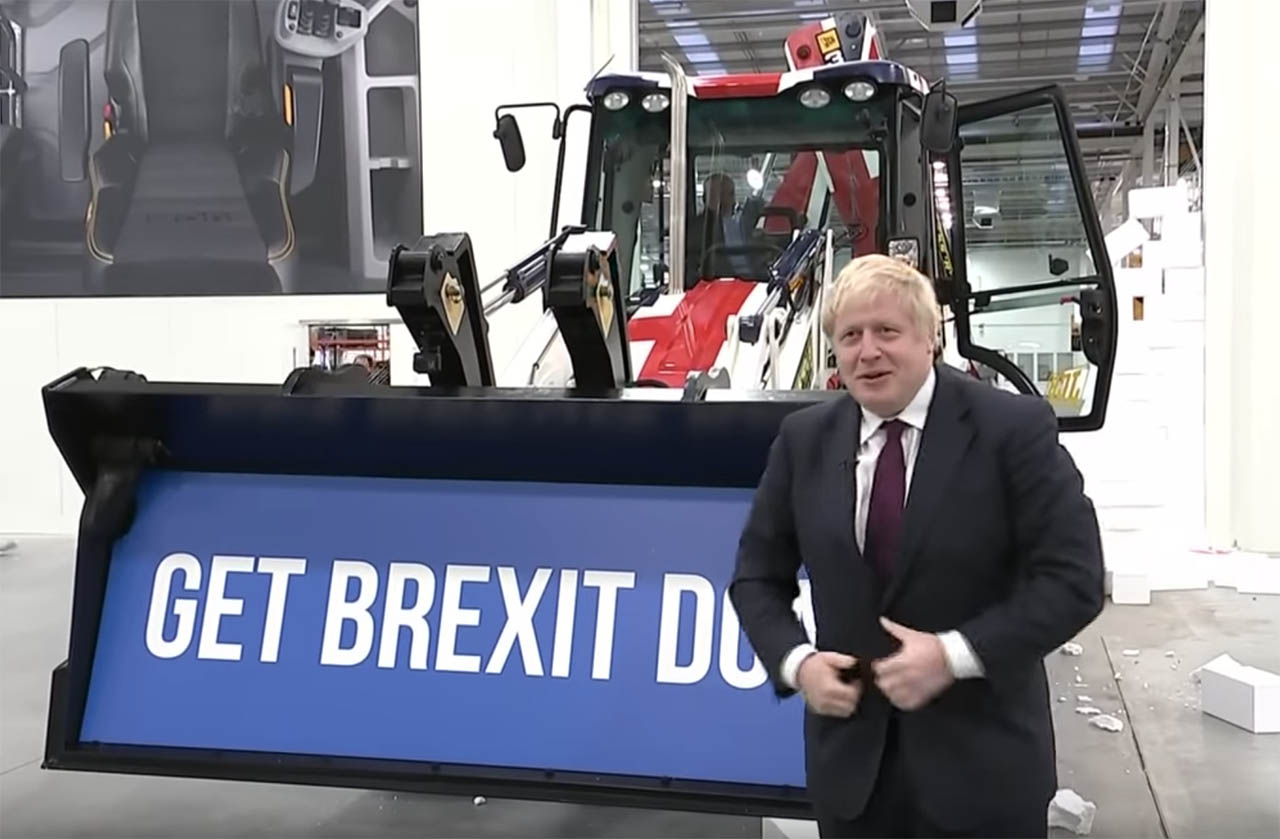 The British Pound experienced heightened volatility on the eve of one of the most important UK elections of a generation, falling in the wake of a highly anticipated YouGov seat prediction only to then stage a sharp recovery through the course of Wednesday.

Sterling shed ground against the Euro, Dollar and other major currencies on Tuesday night and into the Wednesday session following the release of a highly-anticipated election prediction from YouGov, which showed the Conservative Party has seen its projected majority in the House of Commons shrink.

Indeed, the YouGov MRP model shows that the Conservative majority is now within the margin of error, which rapidly raises the prospects of a hung parliament being delivered by the electorate in Thursday's vote. YouGov reported that their latest projections - based on the largest set of survey data available in the polling industry - now shows a Conservative majority of 28, down from the 68 majority predicted in the previous MRP survey. "GBP saw a sharp sell-off from this week’s highs, after last night’s YouGov MRP poll showed a narrowing in the Conservative party lead," says Robin Wilkin, a cross-asset strategist with Lloyds Bank.

The Pound has for some weeks risen on the idea that a Conservative majority would see Brexit and political uncertainty rapidly diminish, unlocking UK business investment in the process and and attracting inflows of foreign investment.

But a renewed promise of years of political and Brexit uncertainty inherent in a hung parliament, where no party commands a majority, will surely lead investors to question their bullish stance on Sterling over coming hours.

"The projection still estimates a Conservative majority but significantly smaller than the first estimate released a couple of weeks ago and YouGov says it cannot rule out a hung parliament due to the statistical uncertainty," says Allan von Mehren, Chief Analyst at Danske Bank. "Our base case remains a Conservative victory but given the new projection it is now less certain than previously thought." 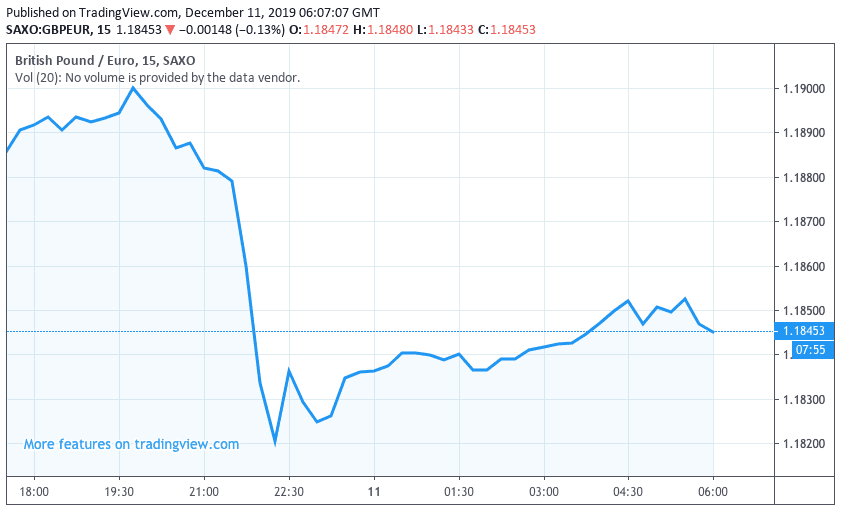 Above: Sterling fell in the aftermath of the release of YouGov's MRP projection

According to YouGov estimates, the Conservatives will win 339 seats in total, down from 359 seats, while Labour are seen winning 231 seats, up from 211.

"Anything sub 340 will not be welcomed by the market, 330 is when the shine starts to come off as ERG remain key players here," says Jordan Rochester, Global FX Strategist with Nomura.

The ERG is the European Research Group of eurosceptic Conservative MPs, who advocate for as much divergence from the EU as possible. If Johnson's majority is small, it gives this group of MPs more power in Parliament than would be the case under a large majority.

The point made by Rochester is that the ERG could hold back the signing of any future trade deal if they deem it to be too soft, and we have seen Sterling come under pressure when Parliament fails to ratify key legislation. 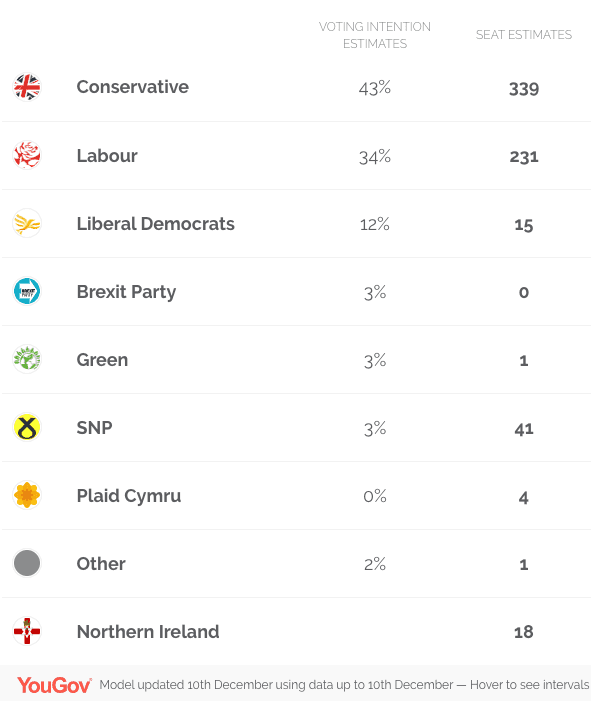 But perhaps the most important message from the YouGov projection model is that the trend over recent weeks has been an increase in support for Labour, and there is a good chance this trend extends well into Election Day. Therefore, this majority of 28 is at risk of being whittled down yet further ensuring no one party can command the House of Commons without support.

Such an outcome would then make the prospect of a Labour-led minority Government highly likely, as the Conservatives have no obvious coalition partners having fallen out with the DUP over the nature of the Brexit deal struck between the UK and EU.

"Over the last fortnight we've seen the Conservative lead and the number of seats they are projected to win gradually fall. There are two days until polls close and time for voters to change their minds," says Anthony Wells, Director of Political and Social Research at YouGov.

"This sort of uncertain scenario without a clear leadership would increase the risk that the UK could crash out of the EU on 31 January, which is why this would trigger a significant weakening of the GBP initially."

Falkenhäll says a hung parliament outcome "is very bad for the GBP short-term," but "it might be a different and more positive long-term story if the UK is able to form a coalition and the EU accepts an extension, which would make a second referendum an option."

"However, currently this seems like a far-fetched alternative combined with a lot of ifs and buts," adds Falkenhäll.

"The poll has raised concerns that a hung parliament is not off the table, a result that would bring back to light the risk of a disorderly exit. As we noted in the past, we would stay sidelined ahead of the actual results as we find it hard to trust opinion polls. After all they were wrong in estimating the Brexit referendum outcome back in 2016, as well as the results of the 2017 election. As for the Pound, we repeat that the risks surrounding its reaction may be asymmetrical," says Charalambos Pissouros, Senior Market Analyst at JFD Group. 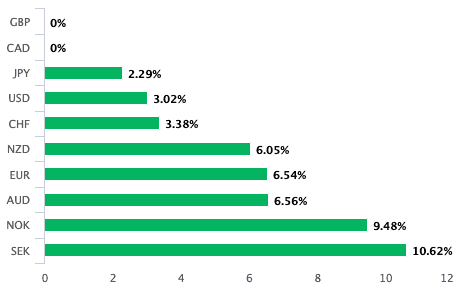 Above: Sterling has gained against the major currencies in 2019.

Ahead of Thursday's vote the Pound can claim to be the best performing major currency of 2019, thanks to its rise on the back of a rapid decline in fears for a 'no deal' Brexit and the rise in odds that a Brexit deal will be passed by a new majority Government.

However, even if Johnson does win a majority on Thursday, some analysts in the market are saying the Pound is already looking stretched at current levels, and might be due a reversal anyway.

"The continued climb in Sterling this week suggests that a Conservative win in Thursday’s election is now close to fully discounted. So even a landslide victory might hardly see the Pound rise," says Oliver Allen, an economist with Capital Economics.

Allen says in the early stages of the election campaign, Sterling followed the probability of a Conservative majority pretty closely: 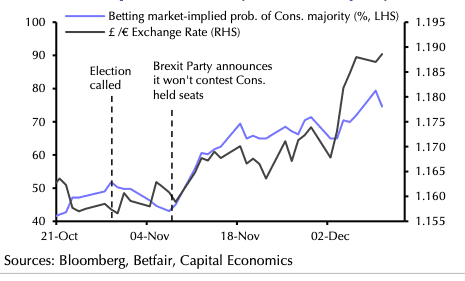 However, the above shows that over recent days the relationship between Sterling and the odds market appears to have decoupled, suggesting the Pound might have appreciated too far.

"Sterling has risen by even more than its earlier relationship with the betting odds would suggest," says Allen. On Wednesday the implied odds of a Conservative majority at the Betfair Exchange has fallen back below 70%, it had been as high as 80% on Monday; the fall in odds explains why the Pound is trading below the recent multi-year highs reached against the Euro and multi-month highs achieved against the Dollar earlier this week.

Allen says investors are still however positioned in Sterling as if a Conservative win is essentially a foregone conclusion.

"Accordingly, if this came to pass, we think that any rise in Pound would be muted," says Allen. "On the other hand, the Conservatives failing to win a majority would come as a shock, and could result in a significant drop in the Pound."

JFD Group's Pissouros says the Pound could gain should the Conservatives gain a majority, "but we don’t expect a huge rally, as, judging by the Pound’s latest rally, most of that outcome appears to be already priced in."

"On the other hand, a hung parliament may be a big disappointment, pushing the pound off the cliff. Yesterday’s poll, even still pointing to Tory majority, gave us a taste on how much GBP-traders are afraid of that outcome," adds Pissouros.